Exclusive to Nintendo 3DS
Don’t tell Titanfall, The Elder Scrolls Online or Watch Dogs, but for some gamers this is going to be the most exciting game released in the first half of this year.

There are millions of DS and 3DS owners out there, and for them Professor Layton has become a huge draw. Ditto Phoenix Wright, even if the ace attorney’s star has waned in recent times. Put two big stars together in one game and you have the makings of a blockbuster, though it could also be a recipe for disaster.

Luckily, Capcom has form when it comes to crossovers, having handled Marvel vs Capcom and Streetfighter X Tekken with real finesse, and while combining legal drama with puzzle-solving detection isn’t quite the same as a cross-franchise beat-em-up clash, it’s repeated the trick again here.

A joint production between Capcom and the team at Level 5, Professor Layton vs Phoenix Wright: Ace Attourney combines two very different heroes and two very different styles of gameplay, to create a game which should make fans of either happy. 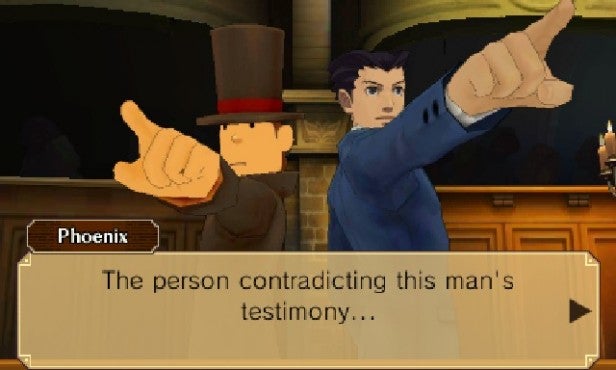 The trick has been to take both heroes out of their usual context, and then not to try and mix things up too much. After each lead gets his own scene-setting prologue sequence, both find themselves with a sidekick – Maya or Luke – in a mysterious, fictional city, ruled by the equally enigmatic Storyteller, and in the grip of witch-hunt hysteria. Within each chapter we get sequences that focus in on the professor, and sequences that focus in on Phoenix Wright, and each works pretty much as you’d expect.

In short, the Layton bits work like a regular Layton game, where you explore the different areas of Labyrinthia, talking to the locals and tapping on the scenery to gather hint coins as you go. Some of the conversations or events result in puzzles, where you’ll have to shift tiles around to get a map or diagram back in shape, decipher optical illusions or solve simple maths or logic problems. Find a puzzle too hard and you can use one of your collected hint coins to buy a tip, which should at least point you in the right direction. 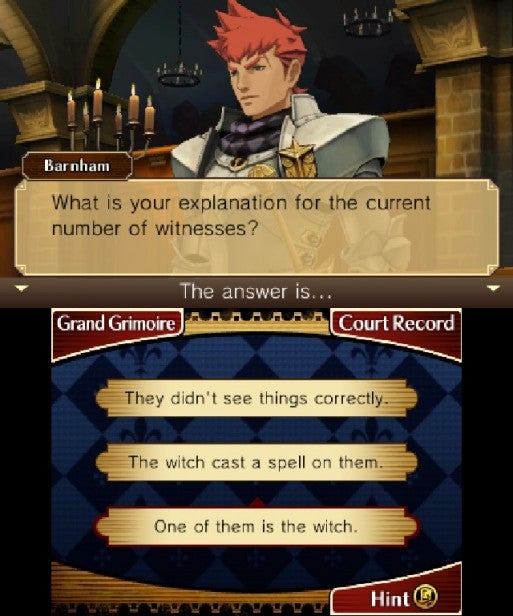 The Wright bits, meanwhile, are classic courtroom dramas, as our crusading lawyer hero defends a series of innocents accused of witchcraft in trials where lives are very much at stake. The key to success is cross-examination: putting each witness on the spot, probing every contradiction or outright lie, and using what evidence you have before you to pin them down or expose any weaknesses or doubts.

While the Layton bits have the genteel pace of most of the Professor’s big adventures, the Wright sections are dished out with all the usual dash and dazzle. Fingers will be pointed, witnesses will lose their cool, cries of “Objection” will be heard. It’s melodramatic, bizarre and sometimes weirdly camp, but would Phoenix Wright fans have it any other way?

The mix works because both elements are integrated into one great story. There’s mystery, suspense and real danger, along with a playful narrative that likes to mess around with notions of what storytelling and destiny are all about. It hasn’t got the epic sweep of Professor Layton and the Azran Legacy, but there so much more was at stake seeing as it was the end of a series. However the important thing is that the Layton portion of this title doesn’t feel like a disposable side-story either. 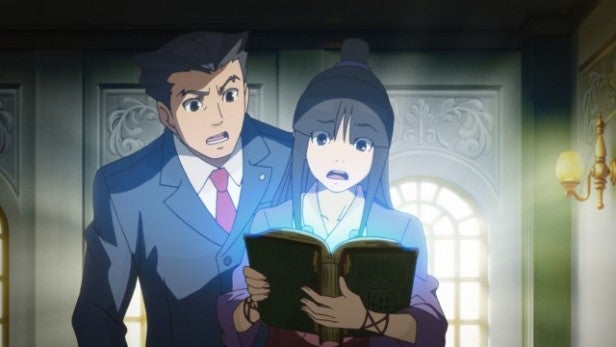 Most of all, it has humour. Both series have always found room for bizarre and eccentric characters, and whether it’s a saucy chef whose obsessive chopping grows more manic under pressure, Labyrinthia’s resident drunk or a goat-crazy lady, this crossover continues the effort.

The Layton sections retain the series quirky, pseudo-English charm. The Wright sections are as full of overblown reactions and silly pratfalls as you could wish for. It’s worth getting just to see how badly an amnesiac Phoenix Wright can fit into his allotted Labyrinthia career.

Fans of either series might not find everything to their liking. The Layton segments are noticeably shorter than the Wright sections, which occasionally drag on for too long. The focal witch trials don’t involve much investigation, so each really comes down to badgering the witness, spotting holes in their story, then simply choosing the right bit of evidence to present.

At times this becomes farcical, as one story collapses and another fills its place, but there’s too much charm to the overwrought drama to object. Some might find the use of hint coins in the trials a little game-spoiling – this isn’t a particularly challenging game – but if you don’t want to use them, nobody’s going to force you. 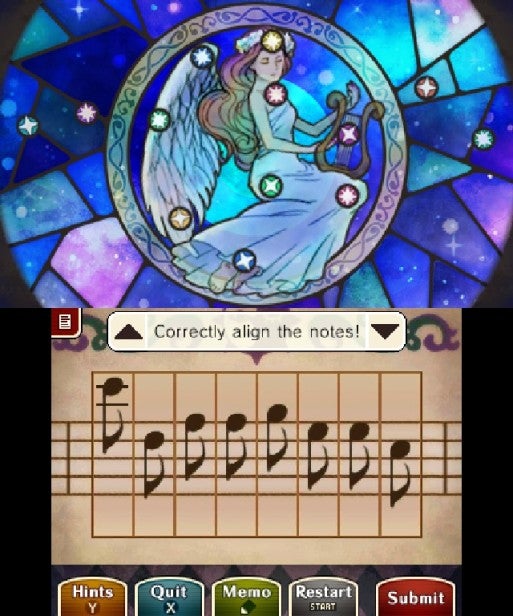 It’s a good-looking game with some gorgeous cartoon graphics, and the clean line style of Layton works surprisingly well with the more conventional animé looks of Phoenix Wright, but the backgrounds can seem flat after Azran Legacy, and the 3D effects aren’t quite so effective.

We’d also say that, in a sense, an opportunity has been missed. Why are the Layton puzzles so divorced from the witch trials, when we could have had the Professor and Luke turning over evidence for Phoenix to pull out in court? Still, look at the game as it is and it’s hard to moan. None of these things make the game any less entertaining or endearing.