There’s plenty to like about the Acer Predator Helios 300: the GTX 1660 Ti is a great gaming chip, it’s paired with a solid specification elsewhere, and the screen is excellent. The exterior looks good, and it isn't bad ergonomically. Other machines are slimmer, lighter and cheaper, but the Acer delivers an effective and well-balanced gaming experience at a decent price.

What is the Acer Predator Helios 300?

The Acer Predator Helios 300 (PH315-52-52ZM) is a mid-range gaming laptop that promises a smooth 1080p gaming experience inside an eye-catching exterior.

That’s all well and good, but this £1199 / $1315 machine isn’t the only affordable gaming device I’ve seen recently. The Asus ROG Zephyrus G made many of the same claims as the Acer, and it was £200 cheaper.

Acer Predator Helios 300 design – Unmistakably a gaming laptop, but is lacking on the port front

The Predator Helios 300 looks good, with a body coated with dark, matte metal. Blue accents surround the touchpad, highlight important buttons and light up the lid.

Elsewhere, the Acer has subtle angles and smart edges, with the only extravagant design to be found in the small air vents, where the metal is painted blue. The Helios is unmistakably a gaming laptop, but it’s not the most out-there design. 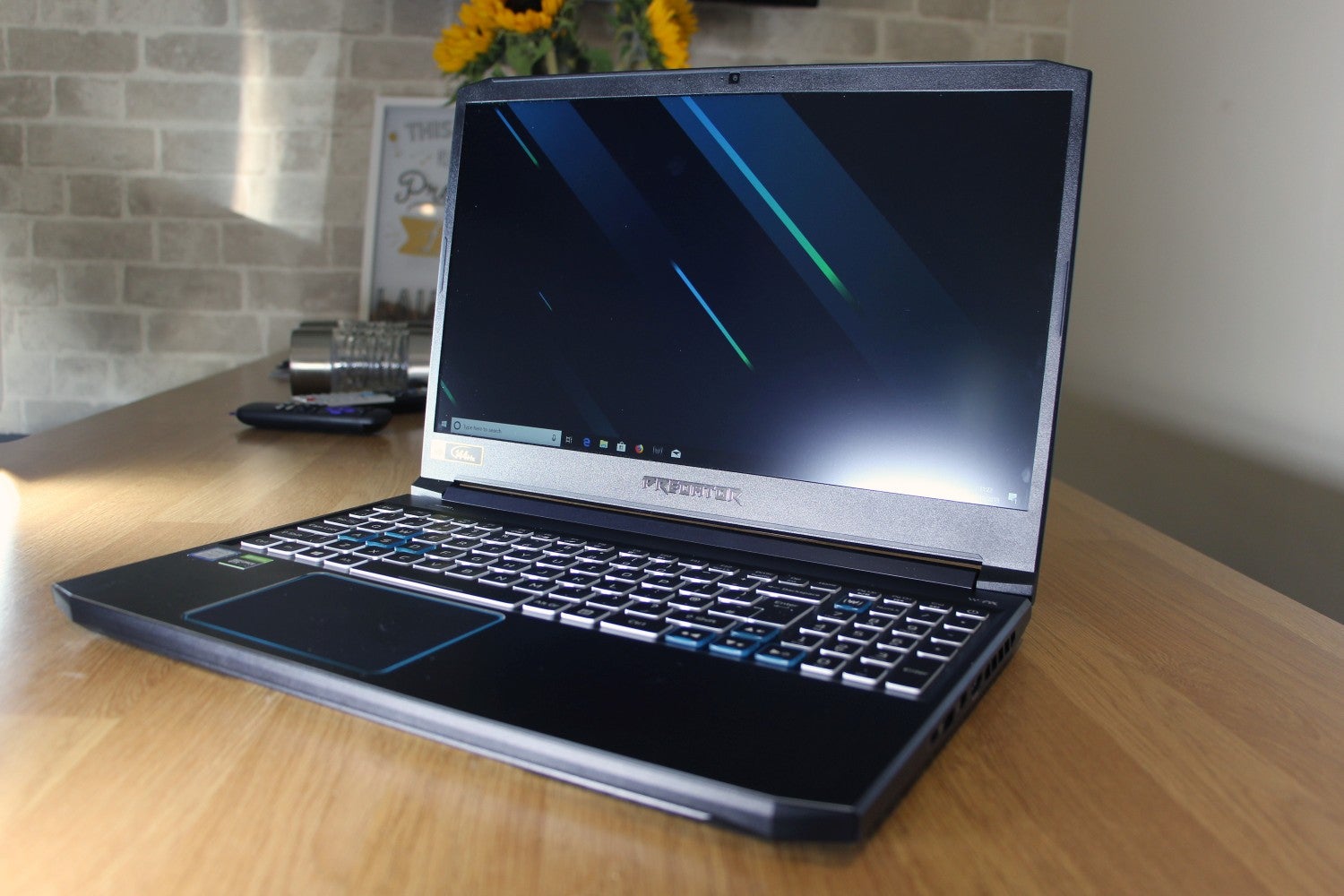 In other areas, the design is middling. Build quality is only average: the metal of the wrist-rest moves too much, and the screen can easily be flexed back and forward. The Acer isn’t weak, but investing in a protective sleeve would be wise.

The port selection is nothing to shout about. You get three USB 3 ports, a single Type-C connection and a sole audio jack. There are HDMI and mini-DisplayPort outputs. However, the Acer is missing faster, full-size USB 3.1 ports, and there’s no card reader or Thunderbolt either. 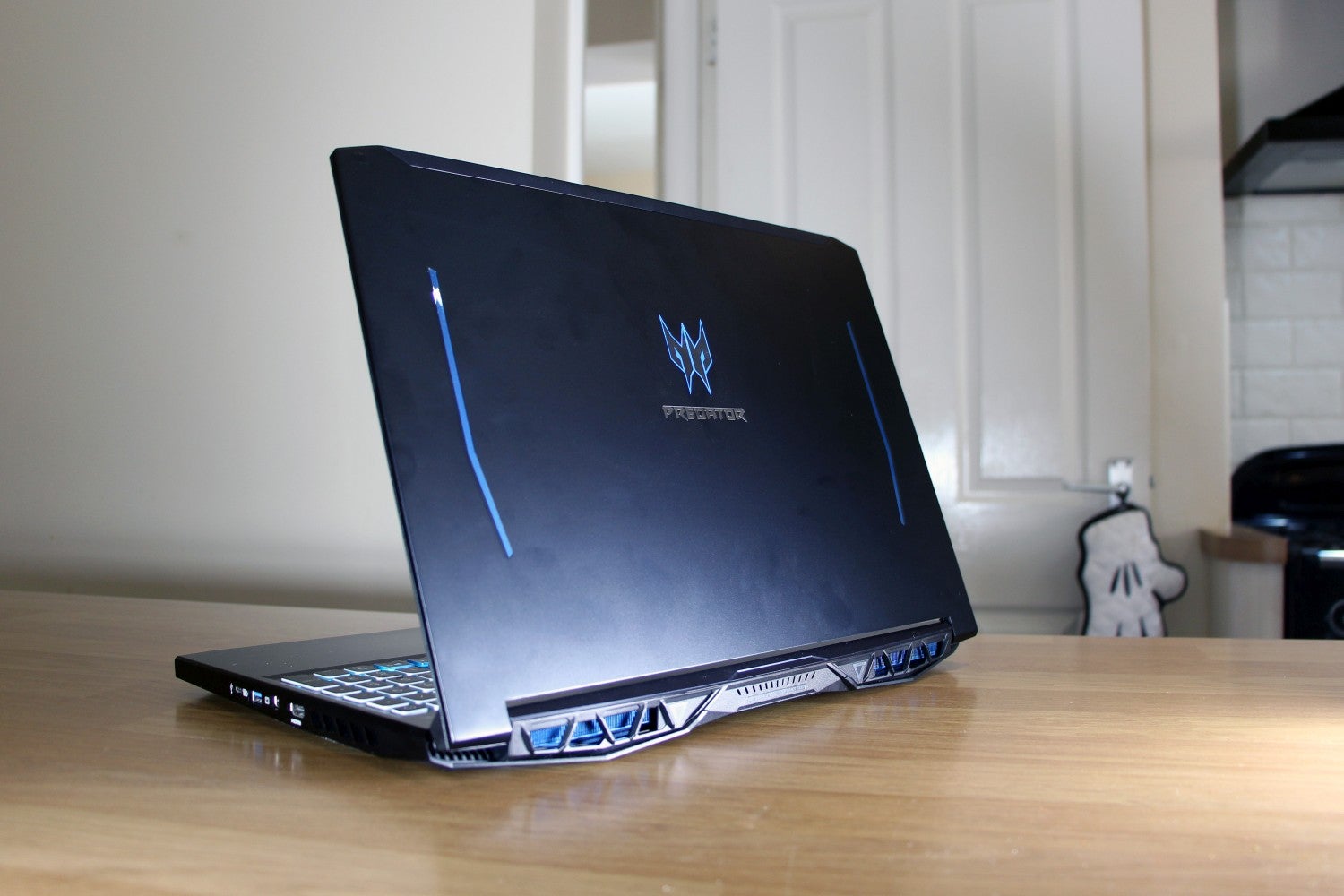 Finally, we come to the Helios 300’s dimensions. The Acer is 23mm thick and weighs 2.4kg, making it chunkier next to rival machines.

Acer Predator Helios 300 keyboard and trackpad – Despite a firm base and reasonable travel, keys feel spongey

The Acer’s keyboard has a good layout: there’s a number pad, the cursor and Return keys are full-size, and many of the key buttons have blue highlights. The font is easily legible, and there’s a dedicated button to launch Acer’s PredatorSense app.

The typing action isn’t bad, either. The metal beneath the keyboard is stronger than that used on the wrist-rest, which means the base is firm. As such, hammering the buttons down feels more satisfying and consistent. The buttons also have a reasonable amount of travel, which helps it to feel more robust while typing. 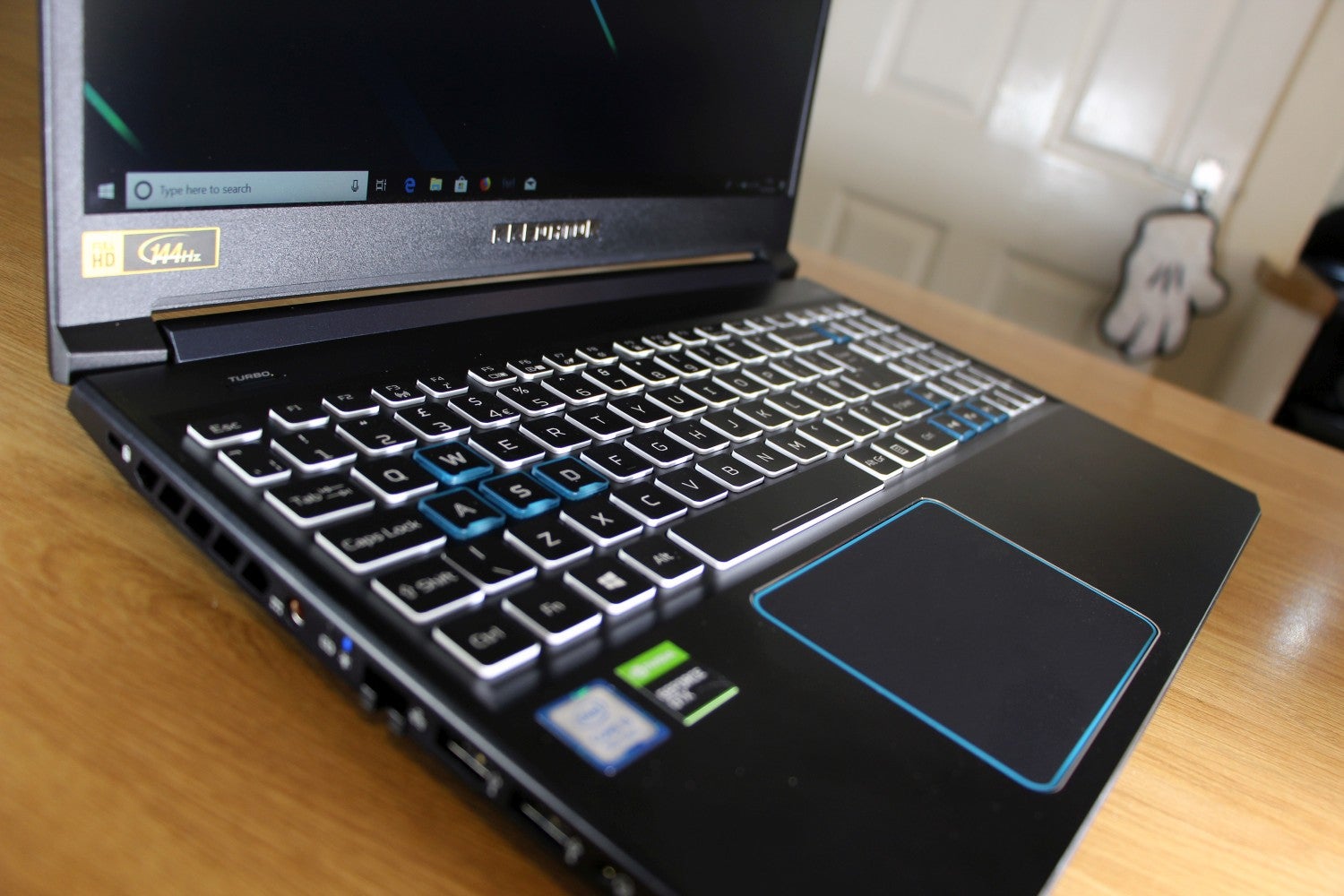 It’s not all good news, however. The buttons are still a little soft, despite the firm base and reasonable travel. That means they’re a tad spongey when compared to the keyboards of the best gaming notebooks.

For mainstream gaming, eSports and typing, the slightly soft buttons won’t prove so much of an issue. If you’re a keen gamer who prefers a crisper, firmer feel, however, you’ll want to look elsewhere.

The Acer’s trackpad is okay, with a smooth surface that supports gestures. Its two built-in buttons are reasonable, with a snappy action. However, for those who really want to enjoy their gaming experience, a USB mouse will be better – as is the case with any gaming laptop.

The Acer has a 15.6in screen with a 1080p resolution, which is fine for gaming. It’s high enough to provide crisp imagery, but without putting too much strain on the graphics core.

It’s an IPS panel with a 144Hz refresh rate and a rapid 3ms response time. There’s no Nvidia G-Sync, so gaming isn’t as smooth as it could be, but it’s still be very good indeed. The Acer’s panel also has a better specification than the Asus ROG Zephyrus G, which topped out at 120Hz with a worse response time.

The Acer offers great quality too. Its brightness of 343 nits is high, and means the Helios can cope under bright artificial lights and outdoors. It’s joined by a black level of 0.28 nits, which helps bring suitable depth to dark areas. Those figures create a contrast ratio of 1225:1, which is high enough to provide good vibrancy and punch in every situation. 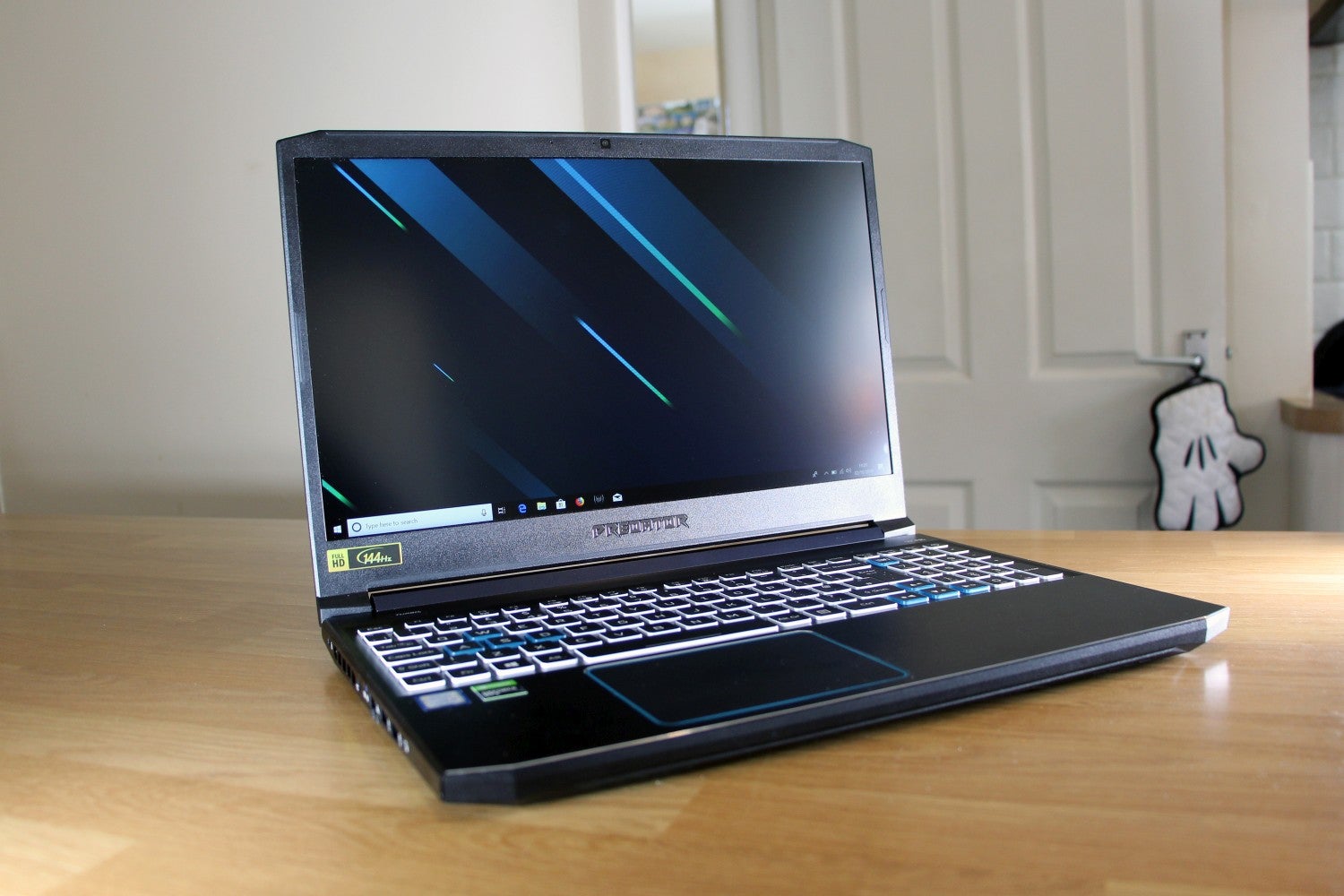 The average Delta E of 3.03 is accurate enough to ensure there are no noticeable colour discrepancies in games, and the colour temperature of 6758K is great – close to the 6500K ideal.

The Acer’s weakest result was an sRGB coverage level of 84.9%. That’s still fine for games, though – the vast majority of the shades required will be rendered by this screen.

The Acer has reasonable speakers, with decent volume and enough clarity to get away with gaming. However, a headset is always advisable for better audio.

The Acer’s key component is the GeForce GTX 1660 Ti. It’s one of Nvidia’s newer and more affordable chips, and it represents the stepping stone between last year’s 10-series GPUs and the newer RTX 20-branded cards.

The halfway house positioning means the GTX 1660 Ti has a curious specification. It uses the same Turing architecture as Nvidia’s latest GPUs, but the RT and Tensor cores have been omitted. That means the mid-range GTX 1660 Ti can’t handle ray-tracing or DLSS – Nvidia’s two new flagship technologies.

Still, those technologies aren’t available on many games right now, so it isn’t a huge loss – especially at this price. 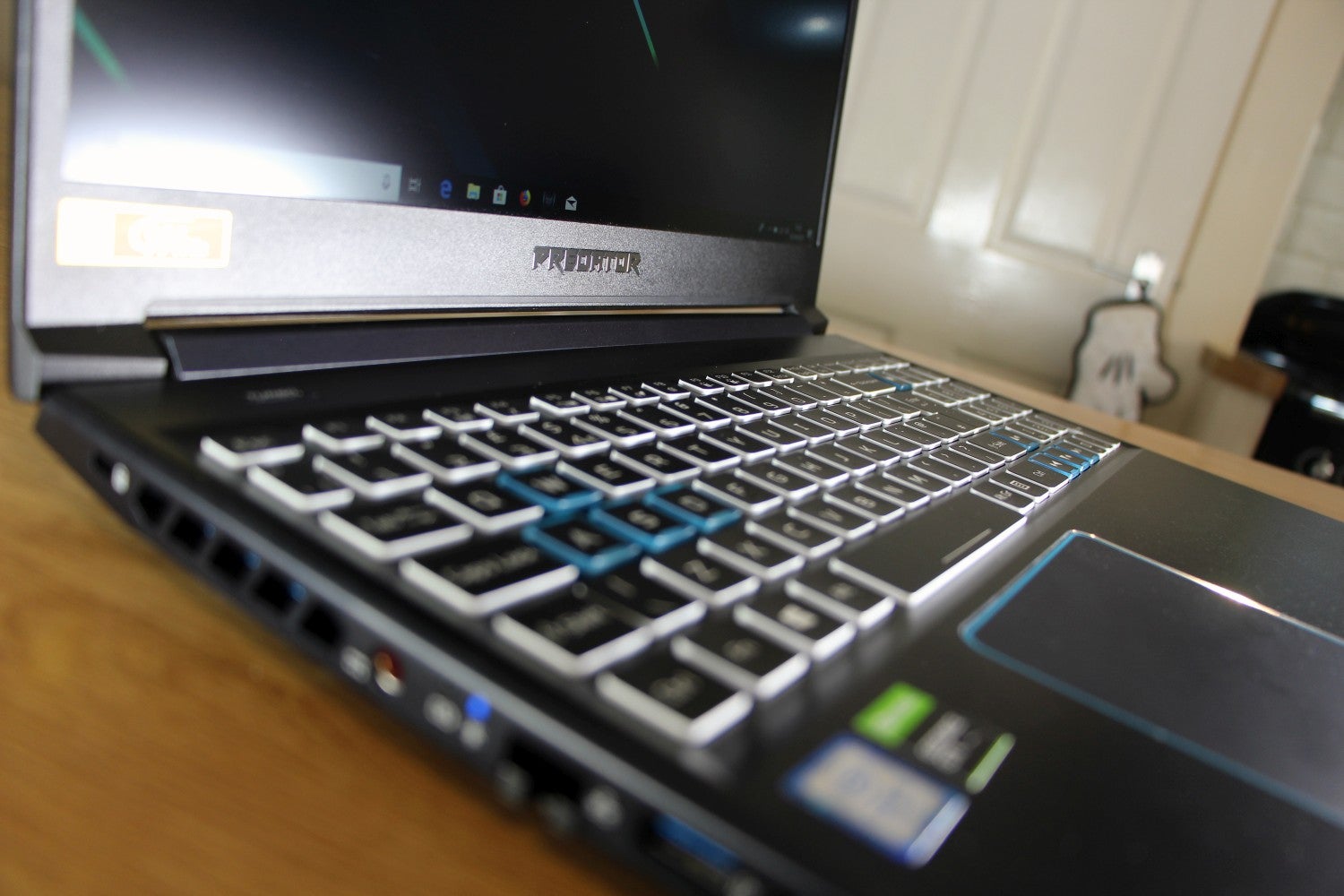 That advantage translated to real-world tests. The Acer’s Shadow of the Tomb Raider average of 74fps is six frames better than the Asus, and it scored 109fps in Shadow of Mordor – nine frames quicker. It’s seven frames faster in Battlefield V.

The Helios 300 shows good pace. The GTX 1660 Ti will play any of today’s top single-player games at 1080p – and it will do it with more speed and for longer into the future than the Asus, thanks to that slight performance improvement. Esports games and less-demanding titles will run at beyond 100fps, which means they can be butter-smooth on the 144Hz screen.

However, the toughest single-player titles won’t run at beyond 100fps unless you dial back the graphics settings. You don’t get ray-tracing, and there still isn’t enough power here to handle outputting to VR headsets or to higher resolutions.

If you do want more power, a RTX 2060 laptop is better. Machines with that GPU typically score around 14,500 in 3DMark: Fire Strike, but prices start at £1299 and quickly increase. 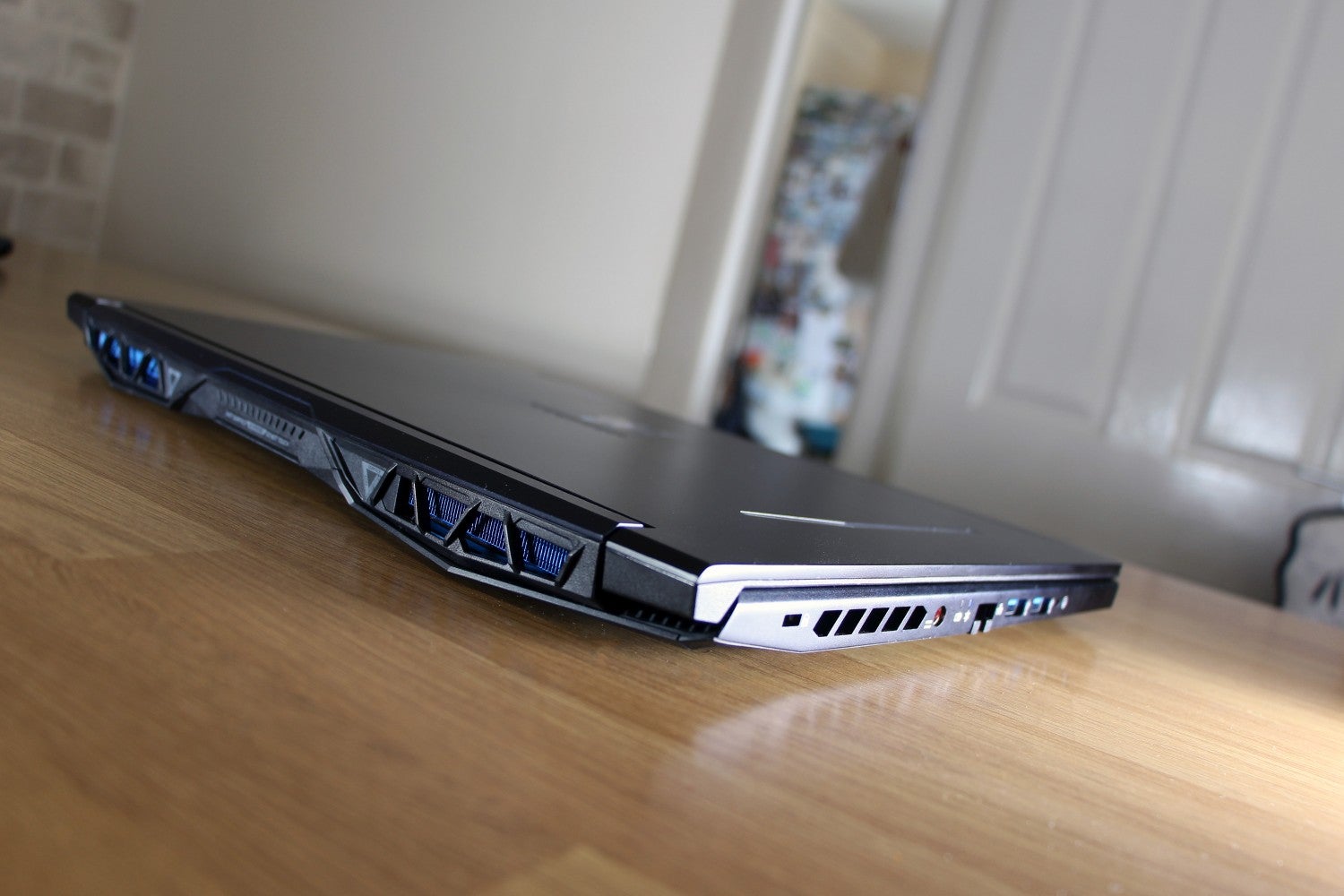 This is another area where the Acer outpaces its more affordable Asus rival. The Asus included a quad-core Ryzen 7 3750H that couldn’t keep up in benchmarks.

In Geekbench, the Acer’s Core i5 returned single- and multi-core scores of 4590 and 13,211. Both results are a little better than the Asus. The Acer then scored 800cb in Cinebench – which is again marginally quicker than its cheaper rival.

The difference in CPU performance isn’t huge. In games and in day-to-day tasks, such as web browsing and Office tools, both machines will be just as quick. However, if you want to run tougher applications, such as photo-editing software, the Acer’s Intel CPU will be better.

The Acer has no thermal problems. Its peak CPU and GPU temperatures of 80ºC and 70ºC are fine, and around 10ºC better than the Asus. None of the heat makes its way to the exterior panels, and the noise levels are fine too – there is inevitable fan noise, of course, but it’s no worse than rivals and can be easily drowned out by a headset.

In a low-end application test, the Acer’s battery lasted for 4hrs 30mins. That’s actually a couple of hours behind the Asus – so if you want a machine to handle some work away from the mains, the cheaper Asus is a better bet. 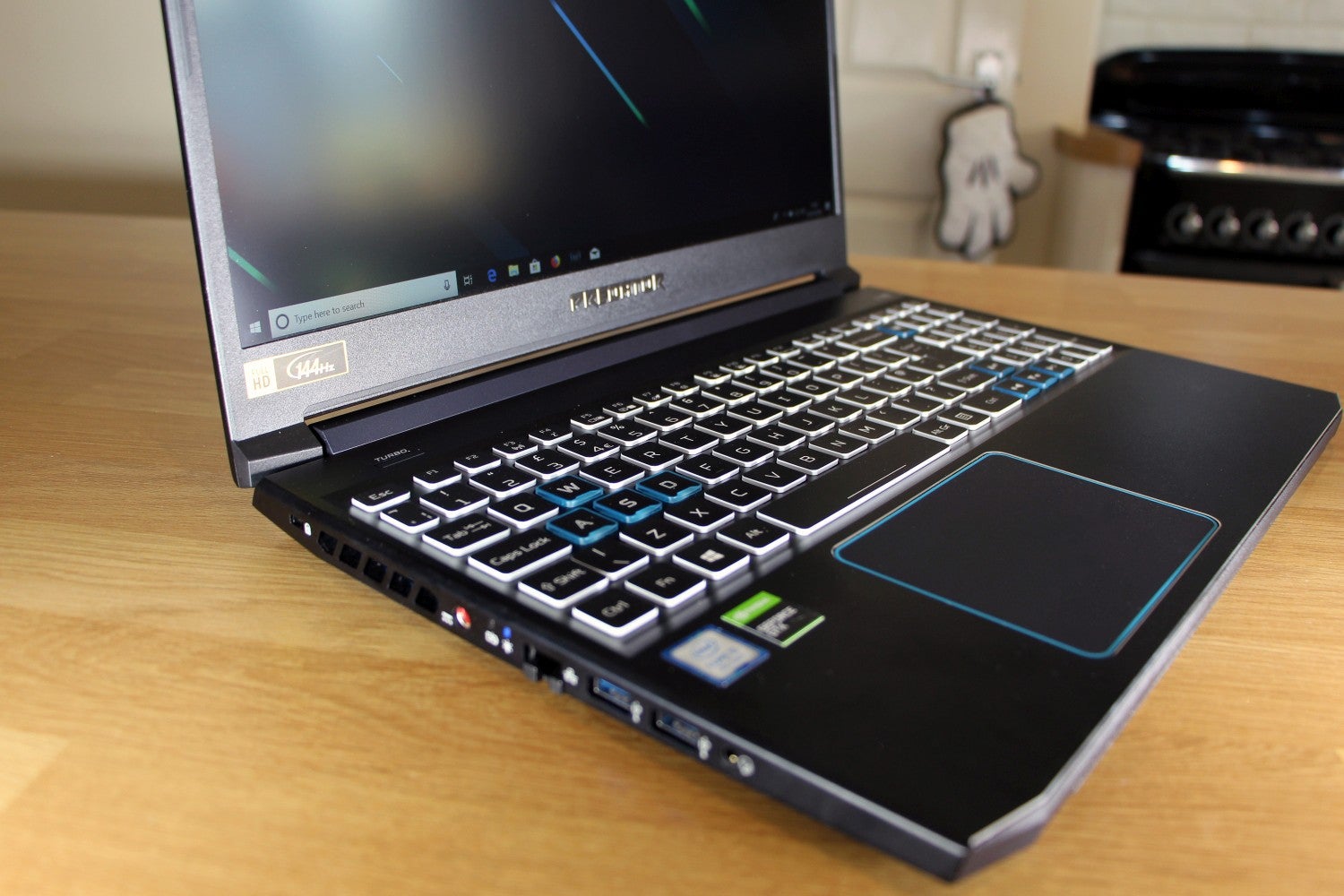 In a gaming test the Acer lasted for just over an hour, which is also a little behind the Asus. However, it’s somewhat moot – both machines need plugging in for a proper gaming session.

The Asus, on the other hand, is only available in its sole AMD and GTX 1660 Ti configuration.

Should I buy the Acer Predator Helios 300?

The Acer Predator Helios 300 is an affordable laptop, which does mean a compromised design. For the most part, however, this system excels in the most important areas.

The full-power GTX 1660 Ti is quicker than the Max-Q version and fast enough for 1080p and eSports gaming. It can’t handle ray-tracing or anything beyond 1080p, but that’s expected at this price. Similarly, the CPU is rapid enough for gaming and for day-to-day computing, and the storage and thermal performance are good.

Elsewhere, the screen is excellent and the keyboard and exterior design are all fine, if not brilliant. Battery life is middling, but that’s no surprise with a gaming laptop.

The cheaper Asus also offers reasonable 1080p gaming power, and it’s a little slimmer and lighter than the Acer. However, its GPU and CPU both fall behind the Acer and it has a far poorer screen.

The Acer may cost a little more, but it doesn’t break the bank – and the extra money allows it to offer more computing power and a better-balanced experience. It’s a great option for affordable gaming.