What is the Polk MagniFi Mini?

Once the bastion of space-saving home cinema, it seems that even the trusty soundbar has become too imposing for some living rooms. As a result, there’s a growing demand for compact soundbars that deliver room-filling audio from even smaller boxes.

One such product is the Polk MagniFi Mini, which as the name suggests is a scaled-down version of the MagniFi soundbar we tested back in 2015. The Mini adds Wi-Fi and Google Cast to an already generous feature list and crams it all into a unit measuring just 340mm wide, with a wireless subwoofer to bolster bass output.

With rivals such as the Philips Fidelio B1, JBL Boost TV and Acoustic Energy Aego Sound3ar – not to mention new bars from Sony, Panasonic and Orbitsound on the way – it’s a hotly contested market, so how does the Polk measure up? 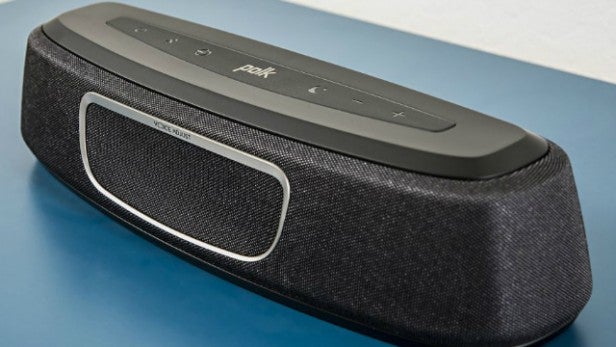 Unbox the Polk and its compact dimensions are even more remarkable in the flesh. Narrower than a Blu-ray deck and half the height of an AVR, the MagniFi Mini is a cinch to accommodate on a TV stand or shelf. It’s attractively styled too, with chunky black and silver panels set into a black cloth grille. The trapezoid shape and curved ends keep things visually interesting.

Build quality is excellent. It’s surprisingly heavy and rugged, with a panel of flat rubber buttons on top and vibration-quelling rubber pads on the bottom. The buttons include power, Bluetooth, input selection, night mode and volume. 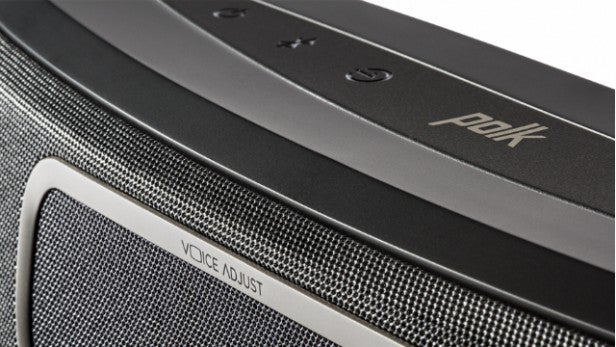 A column of LEDs on the front light up incrementally to indicate the main, bass and centre channel volumes. Different combinations indicate which source is selected – one for HDMI, two for optical, and so on – while different colours are used to denote audio modes and formats. It’s confusing without the manual to hand; a text-based display would have made things clearer.

The surprisingly generous socketry includes an HDMI ARC port, optical input, 3.5mm analogue input and a USB charging port. An HDMI input would have been nice, but unlikely on such a compact unit. There’s a setup button and LED for the built-in Wi-Fi, plus an Ethernet port for good measure.

With its squat bodywork and chunky feet, the wireless subwoofer looks like something you’d see crawling round the Rebel base on Yavin IV. The matte-black finish, curved edges and ridged top panel are unusually stylish for a sub, although the hollow noise when you tap the sides won’t instill you with confidence.

Take a peek underneath and you’ll spot a 6.5-inch downfiring woofer and bass reflex port. As a wireless sub, it doesn’t have to be tethered to your TV stand but the nearer it’s placed to the soundbar, the better. 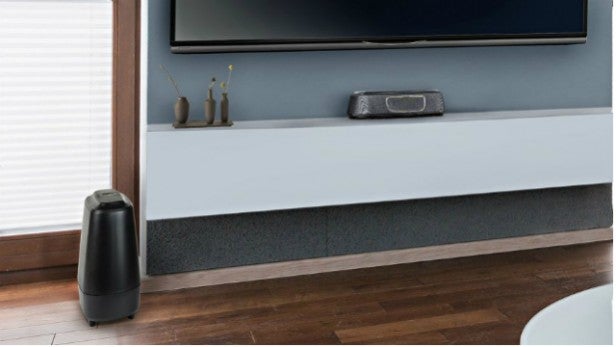 The Polk boasts built-in Bluetooth, Wi-Fi and Google Cast support, the latter allowing you to stream audio directly from compatible apps such as YouTube and BBC iPlayer.

Power output is quoted at 150W, with a speaker array that includes four 2.25-inch mid-range drivers and two 0.5-inch tweeters. Two of the mid-range drivers are side-firing in order to achieve a wide dispersion. There’s built-in Dolby Digital 5.1 decoding, but no DTS.

Sound settings include Movie, Music and Sports presets, which tweak the bass and mid-range to suit each type of content, while Voice Adjust improves speech clarity using a dedicated volume on the remote.

The Night Effect mode reduces bass and increases Voice Adjust, so you don’t wake the family as you watch late-night repeats of Jeremy Kyle. 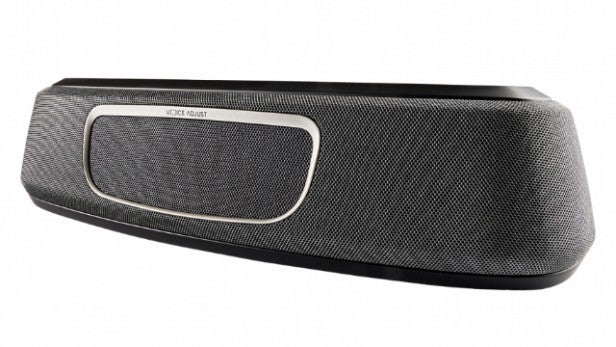 Setup is incredibly simple. With a choice of ARC and optical sockets, it’s a question of connecting one cable to the TV and you’re done. ARC requires a little tinkering in the TV setup menu, but nothing too taxing. Mine worked without any trouble.

Setting up Google Cast is equally simple – just download the Google Home app and follow the instructions. It finds the Polk automatically and shares the Wi-Fi password from your phone. The informative setup screens get you through the process quickly and smoothly, playing a test sound along the way to confirm the connection. 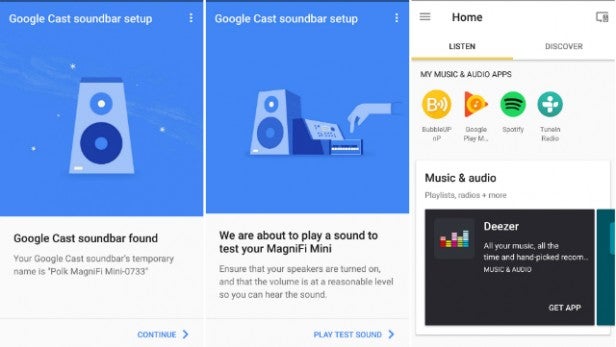 Once connected, streaming music from apps such as Google Play Music, Spotify and Bubble UPnP is remarkably simple – just tap the Google Cast icon within the app and select Polk as your speaker. The Google Home app allows you to configure your speakers and access compatible apps already installed on your phone, as well as helping you find new ones.

The Polk’s chunky, tactile remote is a pleasure to use. The buttons lie under a rubber top surface, with a series of bumps and raised icons helping you identify them in the dark. The buttons click solidly and are helpfully laid out – each input and sound mode gets its own key, while dedicated volume controls let you adjust the main, bass and voice volumes individually.

You can stick with your TV’s own remote if you prefer, by connecting via HDMI ARC or using the Polk’s remote learning feature. 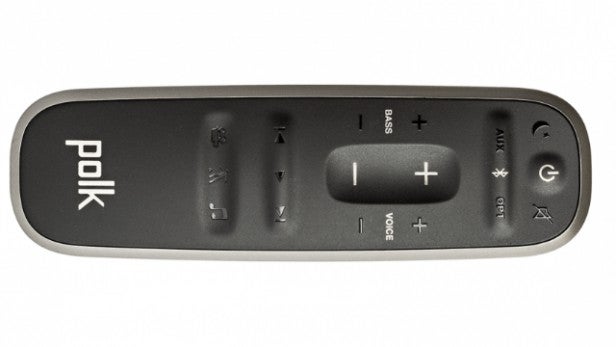 Amazingly, the MagniFi Mini delivers on Polk’s promise of room-filling sound, giving you a large-scale performance that no TV can deliver, but it lacks the sophistication to trouble the best soundbars.

Play The Revenant through the ARC input and it tackles the brutal sound design with aplomb. During the pivotal bear attack scene, the subwoofer lends ample depth to the animal’s growl and pounding footsteps. It’s impressively loud and powerful for such a small unit, generating a much bigger soundstage than expected. 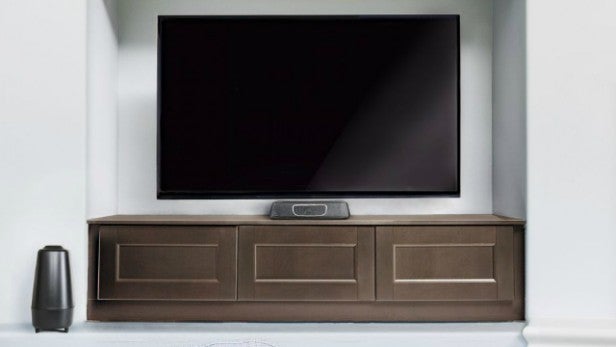 There’s plenty of attack, too. As the bear mauls Leonardo di Caprio, the sound of ripping flesh and fabric is horribly clear, while rifles snap fiercely and arrows fizz.

The Polk does a fine job with voices, making even Tom Hardy’s murmured dialogue sound nice and clear. Voice Adjust is a boon for movie and TV material, projecting speech clearly without hardening up the mid-range. It’s particularly good when listening at low volumes – I reduced the main volume to near-minimum, with Voice Adjust cranked right up, and was able to make out every word.

That said, greater openness and subtlety in the mid-range wouldn’t go amiss – battles between the trappers and Native Americans get a little coarse and congested, with loads of boisterous effects competing for attention within the narrow stage.

Switching to Captain America: Civil War, the breakneck chase through Lagos is packed with weighty explosions and slamming car crashes. Gunshots rattle fiercely and fist-fights have a visceral quality. It’s exciting and full-blooded. 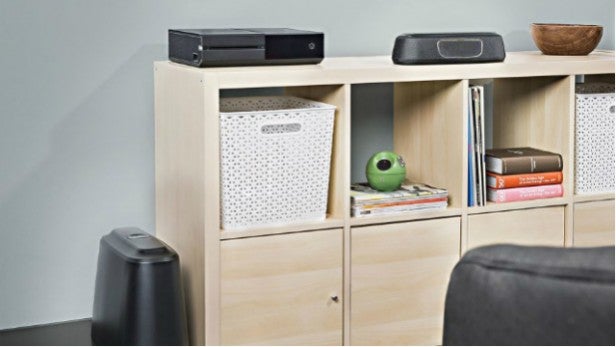 The subwoofer really earns its corn, lacing the action with deep, rumbling bass. It could be a touch tighter and sharper with those quick-fire effects, but provided you keep to a reasonable level, it integrates nicely and doesn’t overpower the other elements.

Treble sounds reasonably open and detailed, but lacks the polish and insight of the best soundbars. Amid the carnage in Lagos, it picks out the gentle click of pistols being loaded and the shimmer of tinkling glass, but louder treble effects can sound bright.

The Polk is a likeable music player but you won’t be throwing out your hi-fi system any time soon. It offers a lively, rhythmic performance with decent agility and weighty bass, but the brass riffs in ‘Should’ve Been You’ by Down To The Bone are a little too spiky for my liking, while subtlety and refinement are in short supply. Voice Adjust doesn’t help matters either, exaggerating random parts of the music while subduing others – I spent far too long fiddling with the Voice volume. 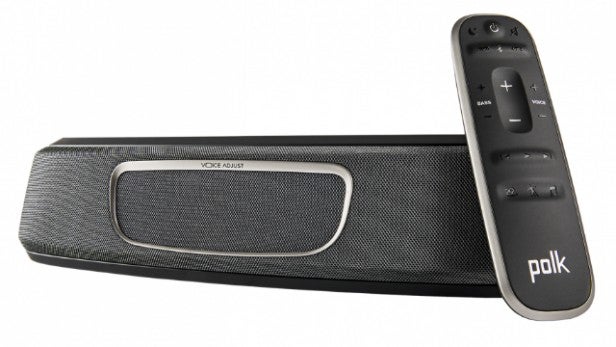 Should I buy the Polk MagniFi Mini?

The MagniFi Mini is a bit of a mixed bag, but there are more positives than negatives. On the plus side, its ability to create a big, room-filling sound from such a compact design is truly impressive, plus it’s a cinch to install and offers a healthy range of features.

Google Cast and ARC connectivity are welcome additions to the spec sheet, while the robust, compact design will go down a treat if space is tight.

On the downside, sound quality doesn’t always hit the spot. It lacks refinement and subtlety where it counts, resulting in a congested and occasionally bright sound. The sub could do with being tighter, too, and Voice Adjust does some odd things to music.

Those seeking a more sophisticated listen should check out soundbars such as the full-size Q Acoustics M3 and Acoustic Energy Aego Sound3ar, but if your only concern is getting a big sound from a small box then the Polk might be worth a punt.

Polk’s feature-packed mini-soundbar delivers a surprisingly big sound from a compact box – but a few sonic shortcomings let the side down.