What is the Philips Fidelio B1?

Philips describes the Fidelio B1 as a ‘nano cinema speaker’. In other words, it’s a super-compact soundbar designed to add some oomph to your TV’s sonics. Philips is targeting people for whom even a regular soundbar takes up too much space, as this one has been squeezed down to a dinky 408mm wide to make it even easier to accommodate in front of your TV.

But with such compact dimensions, how can the B1 hope to compete with bigger soundbars? Well, it works in tandem with a wireless subwoofer and uses microbeam technology to create a wide spread of sound.

Philips Fidelio B1 – Design and Connections

Like most products bearing the Philips badge, the B1 is attractively styled and built to a high standard. Most of the body is taken up by an aluminium grille that curves elegantly around the edges, while the sides are covered by black cloth panels. This upmarket design and impressive build is to be expected at this price, but by no means guaranteed. 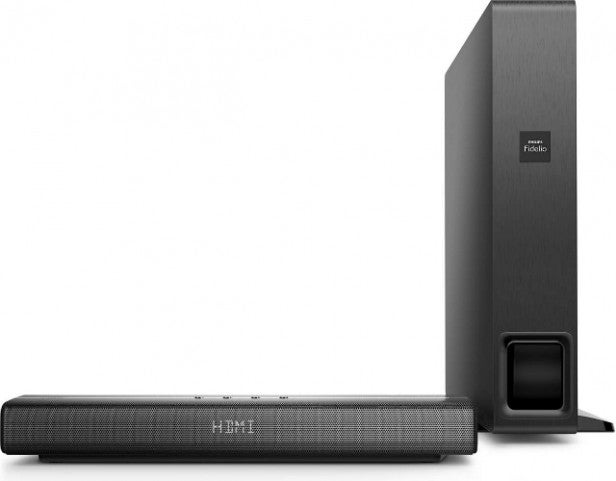 Running along the top are four shiny buttons that click satisfyingly when pressed – these control volume, input selection and power. A large LED display is located on the front, clearly displaying the selected input. There’s a three-stage dimmer and an auto mode that shuts it down when idle.

At 408mm wide and 115mm deep, the B1 is ridiculously compact, looking more like a Bluetooth speaker than a soundbar. It nestled beautifully in the splayed stand of my Samsung UE55KS9000, with the cables trailing tidily through the gap under the screen. It’s robust and chunky, with two rubber strips on the bottom that help to curb vibrations.

On the back is a decent selection of sockets – better, in fact, than on some full-size soundbars. There’s an HDMI input and ARC output, both of which are v1.4 and don’t support 4K HDCP 2.2, plus an optical input. There’s a 3.5mm analogue input and a USB port that lets you play MP3, WMA and AAC from storage sticks (but not Hi-Res Audio files). On the wireless side there’s Bluetooth aptX, AAC and NFC pairing, but network streaming is off the menu.

The cleverly designed sub offers placement flexibility. It’s a large, slender block that you can place vertically alongside the sofa or TV stand, or slide underneath horizontally. In the box is a plastic foot that supports the sub in the upright position, but it stands up just fine without it. Like the soundbar, it’s solidly built and has a pleasant matte vinyl finish, while a pairing button on the back lets you link the two components should the connection drop out.

Despite its slender dimensions, Philips says it doesn’t compromise on bass thanks to its ‘6th-order bandpass racetrack design’ with an internal speaker, tuned at different frequencies by two bass pipes.

The B1 overcomes its size limitations using microbeam technology. With four high-sensitivity racetrack (oval) drivers – two at the sides and two in the middle – arranged in a cross-firing configuration, it creates a 180-degree soundstage with a wide sweet spot.

Meanwhile, two wave guides on top are each equipped with a soft-dome tweeter and a dedicated amplifier. High frequencies are fired through 18 holes of increasing diameters, creating a virtual array of tweeters that reflect high frequencies off the walls towards the listener. 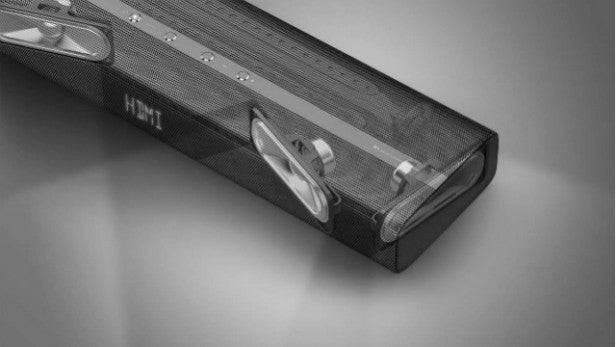 The B1 is a true 5.1-channel solution – fronts, centre, surrounds and sub – with six built-in amplifiers and Dolby Digital decoding. Power output is rated at 120W from the soundbar and 200W from the sub.

Rounding out the feature list are Virtual Surround (Movie), Music, Voice and Night modes, plus dedicated bass, treble and audio-sync adjustments on the remote.

Philips Fidelio B1 – Setup and Operation

The connections are clearly marked and easy to access, which makes installation a doddle. The ARC and optical connections might require a bit of jiggery pokey in your TV’s setup menu, but nothing too taxing.

The subwoofer paired instantly with the soundbar without intervention, and I easily connected a variety of devices via Bluetooth.

The B1’s slender, ergonomic remote benefits from a thoughtful button layout. There are dedicated buttons for each input and sound mode, plus handy Bluetooth controls. The keys give a pleasing click when pressed.

The slogan ‘tiny but mighty’ on the box is a fair summation of the B1’s talents. Louder, wider and more forceful than its size suggests, the Philips doesn’t struggle to fill a room with sound.

With Rogue One in cinemas, I revisited A New Hope on Blu-ray and was drawn in by the B1’s energetic, immersive sound. 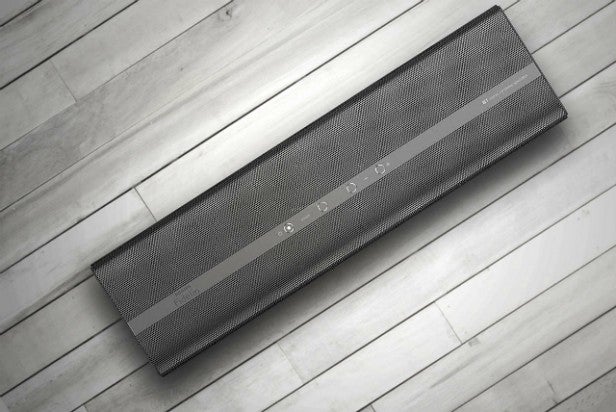 Blaster shots and explosions are projected into the room with drive and enthusiasm, making for a more engaging listen than from my TV’s speakers. It’s a clear sound with decent detail, although the finer subtleties of the track tend to go missing. C3PO’s dialogue is easy to hear as hell breaks loose aboard Tantive IV.

The B1’s microbeam drivers do a terrific job too, creating a wide soundstage that doesn’t change tonality as you move around in front of the unit. The tweeter wave guides add a gentle sense of height, but there’s no suggestion of surround sound whatsoever, despite the on-board 5.1 decoding – if that’s what you want, try the Fidelio B5 with its detachable speakers. 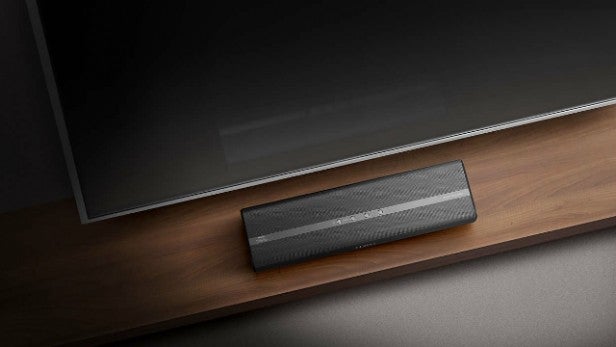 So far so good, but there are problems with the B1’s sound. Firstly, the midrange has a hard, resonant edge that can be unpleasant with certain effects. Screeching Tusken Raiders and Obi-Wan’s howl are uncomfortably strident, and when you push the volume over half way the exploding X-Wings sound brash.

The other issue concerns bass output. For the most part the slim subwoofer adds decent depth, rumbling away during scenes on the Death Star and giving Jabba’s voice a hearty growl.

But it can also be boomy and overpowering. Huge star destroyers rumble too effusively and there’s little definition or detail. Cohesion between sub and soundbar can be improved by reducing the bass volume, but it never feels like the two are completely singing from the same hymn sheet.

These problems spill over into music playback, although they are improved slightly by selecting Music mode. Basslines are muddy and ill-defined, midrange hardness results in nasal vocals and there’s a general lack of refinement. On the plus side, there’s a fair amount of detail and the stereo stage has a nice sense of width. 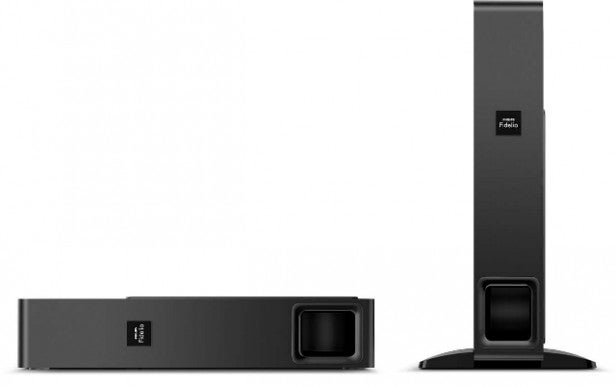 Should I buy the Philips Fidelio B1?

If you want a stylish, well-made soundbar that keeps clutter to an absolute minimum, the B1 fulfils the brief – but its sound quality does little to justify the price. Those in the market for a compact soundbar might be better off checking out the Acoustic Energy Aego Sound3ar or the Orbitsound A60.

That said, the B1’s ability to create a wide, immersive sound is impressive, while its feature list and socketry are more generous than expected.

Philips’ compact, feature-packed soundbar is let down by a hard tone and an overpowering subwoofer.