What is the Acoustic Energy Aego Sound3ar?

The latest generation of skinny TVs has done for sound quality what Brexit has done for UK politics, but Acoustic Energy has come up with a solution. For the former, anyway. The Aego Sound3ar (presumably named by the people behind the movie Se7en) is a soundbar/subwoofer combo that aims to restore sonic excitement to your TV viewing without breaking the bank.

It’s the third generation of AE’s insanely popular Aego range, which has been delivering top-notch sound quality at affordable prices for years. Sound3ar is joined in the range by an identically priced version (Aego³) that swaps the soundbar for a pair of compact satellite speakers.

In the box are a compact soundbar measuring just 500mm wide and a powered subwoofer. The subwoofer is the brains and brawn of the operation, housing all of the connections and supplying 65W of amplification. The passive soundbar connects to the subwoofer using the supplied RCA analogue cable, which cuts the amount of ugly wiring around the TV.

The soundbar’s compact dimensions take up very little space in front of the TV, and once you’ve tucked the sub and cables away, you end up with one of the tidiest sound systems around.

What’s more, its design and build quality go beyond what you’d expect for the money. The soundbar’s solid aluminium alloy body isn’t only rigid and stable, but it also forms a striking visual contrast with the black hole-punch grille. The rounded edges and rubber end panels are also nice touches.

There are no buttons or lights on the soundbar at all – everything is confined to the subwoofer. The only visible detail is the Acoustic Energy logo, but it’s nice and discreet.

The soundbar is angled upwards by 30 degrees when placed on a flat surface. This ensures optimum projection into the room and reduces reflections from the top surface of the furniture on which it is sitting. For those who want to wall-mount the soundbar, there are keyhole fixings on the back.

Like the soundbar, the subwoofer is robustly built and nicely styled. Its compact body sports a dappled black finish, with curved edges and a front-facing black grille. Its compact, unobtrusive shape is easy to accommodate, although the lack of wireless connectivity means you can’t stray far from the soundbar.

Above the grille is a display panel that indicates the selected input using small LEDs. Further along, a row of four green lights flash when you change the volume – the left two for down, the right two for up – and it beeps when you reach the maximum limit. The same lights also display the bass level, which can be adjusted using the remote. It’s all rather old-school, but it works well.

The downward-facing connections are located in a recess beneath the subwoofer. The line-up includes optical digital and 3.5mm minijack inputs, plus left/right speaker outputs to connect the soundbar. There’s built-in Bluetooth for easy music streaming but no HDMI ports – at this price it was never on the cards.

The sparse selection of sockets is a blessing in disguise, since it makes setup nice and easy. After linking the sub and soundbar, simply connect your TV to the optical input and the Aego will play anything you watch. Keep a 3.5mm cable connected to the sub’s input and you can hook up portable devices on the fly. It’s a simple, hassle-free proposition that will go down a treat with techophobes. 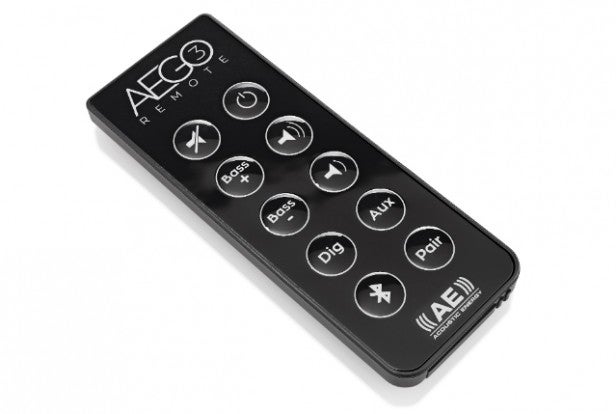 That said, the remote undoes some of AE’s hard work. It’s ridiculously tiny, destined to spend its days down the gaps in your sofa, while the hard blister buttons and unhelpful two-column layout make day-to-day operation fiddly.

There are no Bluetooth controls or sound modes either, but the dedicated bass and input controls are useful. The lack of remote learning means you can’t continue using your TV’s remote.

The Sound3ar defies its budget price with impressive performance. Key to its success is its ability to generate a bigger sound than its diminutive dimensions suggest. It isn’t enormous by any means, but the eager sub and dynamic soundbar bring a sense of scale and excitement that your TV can only dream of. That’s really all you can ask for at this price.

Play Godzilla on Blu-ray and the system revels in the stomping monster effects and rumbling explosions. When Godzilla wreaks havoc on the Golden Gate Bridge, his roar is suitably ferocious without making your eardrums hurt and his footsteps have palpable heft.

Tanks rumble by with a throaty chug and there’s impressive depth as the MUTOs chatter and bellow. The subwoofer requires careful adjustment and placement to prevent booming (put it as close to the bar as possible), but once configured you’ll enjoy good integration between the two components.

There’s a pleasing tonal balance and plenty of mid-range attack, which keeps you engaged. Superb dynamics help communicate the ebb and flow of an action scene – army gunshots snap smartly and clanking metal is clear and crisp.

The soundstage is also peppered with precise detail, such as the gentle patter of rain and dirt crunching under tyres. I’m also impressed by dialogue clarity – the soldiers’ instructions are forcefully barked into the room, and low-level conversations in the army control room are consistently audible.

There are a couple of grumbles, however. Like JBL’s Boost TV, the Sound3ar’s narrow dimensions limit the width and spaciousness of the soundstage. As jets and missiles whizz across the bridge, the effects don’t extend beyond the edges of the screen as they do with bigger soundbars. It all feels rather boxed-in.

The system could also do with a little more oomph. During movie playback I had to crank it up to maximum volume, which just about hit the spot but left me with no room to go louder.

This is fine for small to medium living rooms, but those with bigger spaces will need to seek out something more powerful. It does, however, go much louder when playing music via Bluetooth or analogue input.

And on that note, the Aego Sound3ar is a rather talented musical performer. Its detailed presentation, engaging dynamics and well-judged tonal balance allow for long listening sessions without fatigue, while the sub lends nimble, cohesive low-frequency support.

Should I buy the Acoustic Energy Aego Sound3ar?

Decent soundbars are few and far between in the sub-£200 price bracket, but the Aego Sound3ar is a cut above the budget competition and definitely worth a punt if cash is tight.

It’s well made and attractive, with a compact design that’s easy to accommodate. In action it delivers an entertaining sonic performance, playing movies and music with terrific detail, dynamics and cohesion.

It’s let down by a narrow soundstage and a lack of oomph for larger rooms, but anyone looking for a simple, affordable upgrade for their skinny TV will be more than happy with what it can do.