What is the Philips HR1889 Viva Collection Masticating Juicer?

The Philips HR1889 Viva is the more affordable “slow”, or masticating, juicer from Philips. It sits alongside the pricier Avance HR1947.

The HR1889 Viva is easy to both assemble and clean, with detachable parts that are dishwasher-safe. It performs well with leafy greens, but the results are more lacklustre when it comes to harder veg.

Like other Philips juicers, it comes with a recipe booklet and features neat touches such as integrated cord storage. 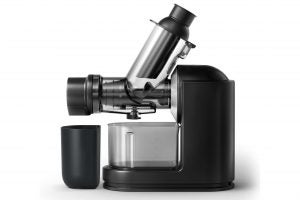 Compact, but long and narrow in shape, with its feed tube protruding, the Philips HR1889 Viva looks similar to many other smaller masticating machines.

The main body of the juicer is made of black plastic with silver detailing, and the juicing unit with the feed tube is a transparent plastic.

Two buttons sit at the top of the machine: one for turning the juicer on and off, the other for the reverse function, which needs to be held down should any fruit or veg become lodged during the juicing process.

There’s no light to indicate that the juicer is ready to use, but it will let out a high-pitched bleep when it’s plugged into a power socket. 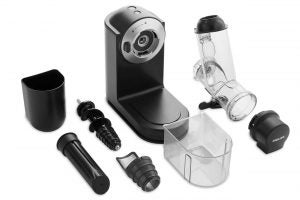 The one-litre juice jug has “ml” and “fl oz” markings. The black plastic bin is surprisingly tiny; however, this helps to keep all the juicing equipment within the appliance’s D36.2 x W13.7 x H36.1cm measurements.

This is in contrast to some of the bigger machines, such as the Sage Big Squeeze or the Kuvings EVO820 Evolution Cold Press, which come with more sizeable jugs that require greater room during the juicing process.

A black plastic plunger is also provided, to assist with pushing the fruit and veg down onto the rotating screw.

A handy drip-stop means the juicing bowl can be sealed without spillage. No cleaning brush is provided, but that hardly feels necessary here, since the filter attached to the squeezing chamber can be easily cleaned with running water.

The Viva HR1889 also comes with a colourful recipe booklet and instructions on finding and using the Philips Healthy Drinks app – a neat touch. 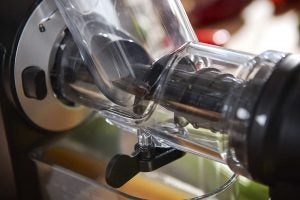 Philips HR1889 Viva Masticating Juicer – What’s it like to use?

Switching on the Philips HR1889, you’ll hear a high-pitched bleep before the motor springs into action, making the screw turn inside the juicing unit.

I achieved excellent results juicing leafy greens, with a 100g of standard shredded supermarket kale producing 70ml of juice. There was a tiny bit of sediment, but this wasn’t particularly noticeable when mixed into the juice.

The same amount of baby spinach leaves created 50ml of juice, with added foam on top. Due to the design of this juicer, it would be tricky to fit a foam separator lid on the jug. But since the juicing speed is lower here than with most other juicers, the amount of foam is negligible. 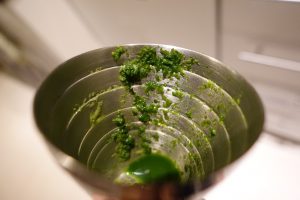 Some spinach leaves became stuck in the feed tube during juicing, which highlights the need to alternate your ingredients.

The machine produced some amusing squeaking sounds while processing the leafy greens, but that is just part of the process and still more pleasant to the ear than the drill-like noise of some centrifugal juicers.

Next I juiced two medium-sized Granny Smith apples, which yielded 150ml of juice, with a little bit a pulp. This is a relatively standard result.

While the Philips is perfectly capable of juicing whole apples, the smaller you cut the pieces, the less likely you are to get any blockages. Half an apple stayed on top of the screw while the machine was running, requiring me to use the reverse function to dislodge it. 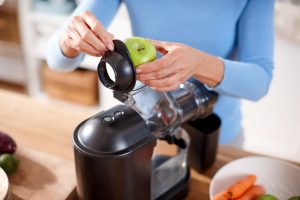 A bunch of grapes was juiced efficiently – another benefit of a slow juicer over its centrifugal counterparts, which tend to throw lighter bits of fruit around without necessarily squeezing the most out of them.

Three medium carrots produced a somewhat disappointing 100ml of juice. While the juice was clear, with no extra pulp, the carrot pulp in the bin was still moist enough for me to use in a carrot cake.

Juicing carrots was probably the noisiest process here, producing a sound akin to a chair being dragged across a hard floor. 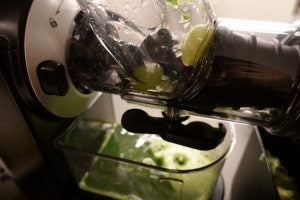 While making several different juices, I had to empty the bin often. This wasn’t a massive chore, but it could prove annoying if you’re wanting to make several glasses of juice in one go – perhaps if you’re juicing for the whole family.

Before cleaning, the juicer can be rinsed out by filling the juicing unit with water and letting the motor run. This helps to pre-clean the juicing screw and the squeezing chamber.

All the removable parts are dishwasher-safe – and they’re equally easy to clean by hand. This includes the micro-sieve, which is relatively small. 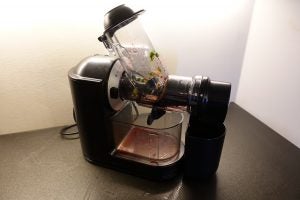 In the world of effective slow juicers, the Philips HR1889 Viva Collection is a relatively affordable option. It may not be the best at processing hard fruits/vegetables – such as carrots – but it excels at leafy greens and soft fruit.

The Viva HR1889’s most obvious competitor is the slightly pricier Philips Avance MicroMasticating juicer. The latter can also be used to prepare nut milk and to juice softer and starchier fruits such as mangoes and bananas, which aren’t suitable for the HR1889 Viva. Meanwhile, the more affordable Panasonic MJ-L500 Slow Juicer comes with an additional frozen attachment for making sorbets.

Still, if your heart is set on a small masticating juicer – and you don’t need to make large batches of juice at any one time – the HR1889 Viva is a quality option worthy of consideration.