What is the EVO820 Evolution Cold Press Juicer?

The Kuvings EVO820 Evolution Cold Press Juicer is sure to please even the most exacting health enthusiast. It do most things you’d expect from a premium juicer, with a high yield from both fruit and veg. However, it can even produce nut milks, and offers the potential to make purées for baby food, sauces, smoothies and even orange juice – although some of these functions require additional attachments.

Essentially, it can be adapted to be the juicer you need, with the potential to modify it easily if your lifestyle changes. Juicers are often hidden away in cupboards, but the Evolution is designed to be on show. Rather than the usual glossy or metallic finish, its base has a textured leather look in gunmetal, red or silver, topped with a smoky, BPA-free feed chute.

It’s operated by a switch on its rear, which doubles as reverse to clear clogs. There’s an integral handle, making it easy to move it when required. Like some slow juicers, it runs at a low speed of 60rpm, incorporating less oxygen for juice with a longer lifespan of around two days.

Another notable feature of the EVO820 is its 82mm-wide feed chute. It’s Kuvings’s largest to date, resulting in less prep time, and a clever design with a basket – perfect for softer ingredients, such as berries or orange segments.

This is all then ‘chewed’ by the juicing screw and strained before the pulp is ejected out of one spout, while juice flows from the other. A detachable ‘smart cap’ on the juicing spout can be closed to mix the contents inside, or prevent drips on the worktop. 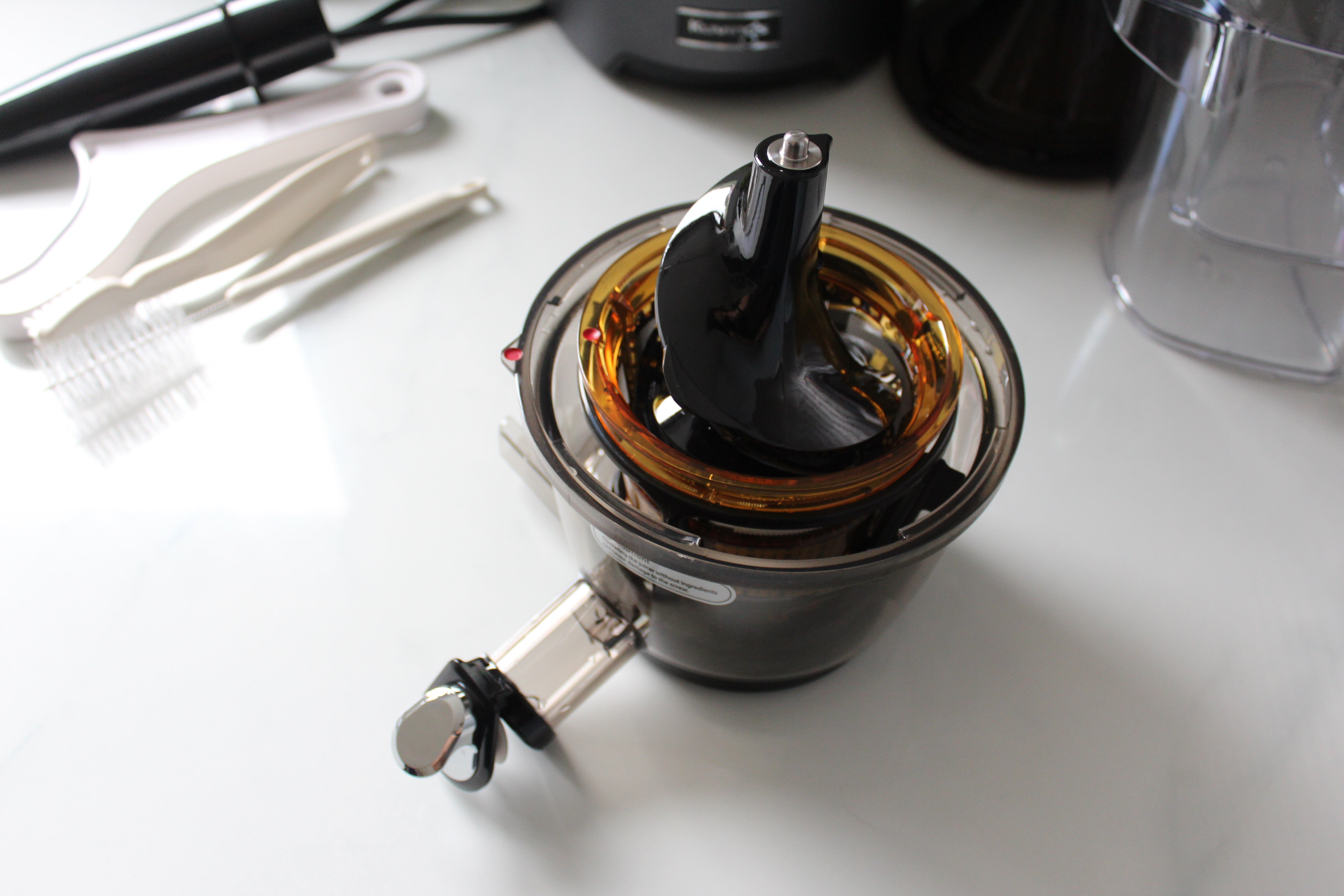 EVO820 Evolution Cold Press Juicer – What’s it like to use?

There’s a fairly extensive recipe book included with the Kuvings EVO820 Evolution Cold Press Juicer, although it features some ideas that you can only make with the blank strainer and smoothie strainer, which aren’t included. For example, without the blank strainer, you can’t make sorbet or process frozen ingredients. 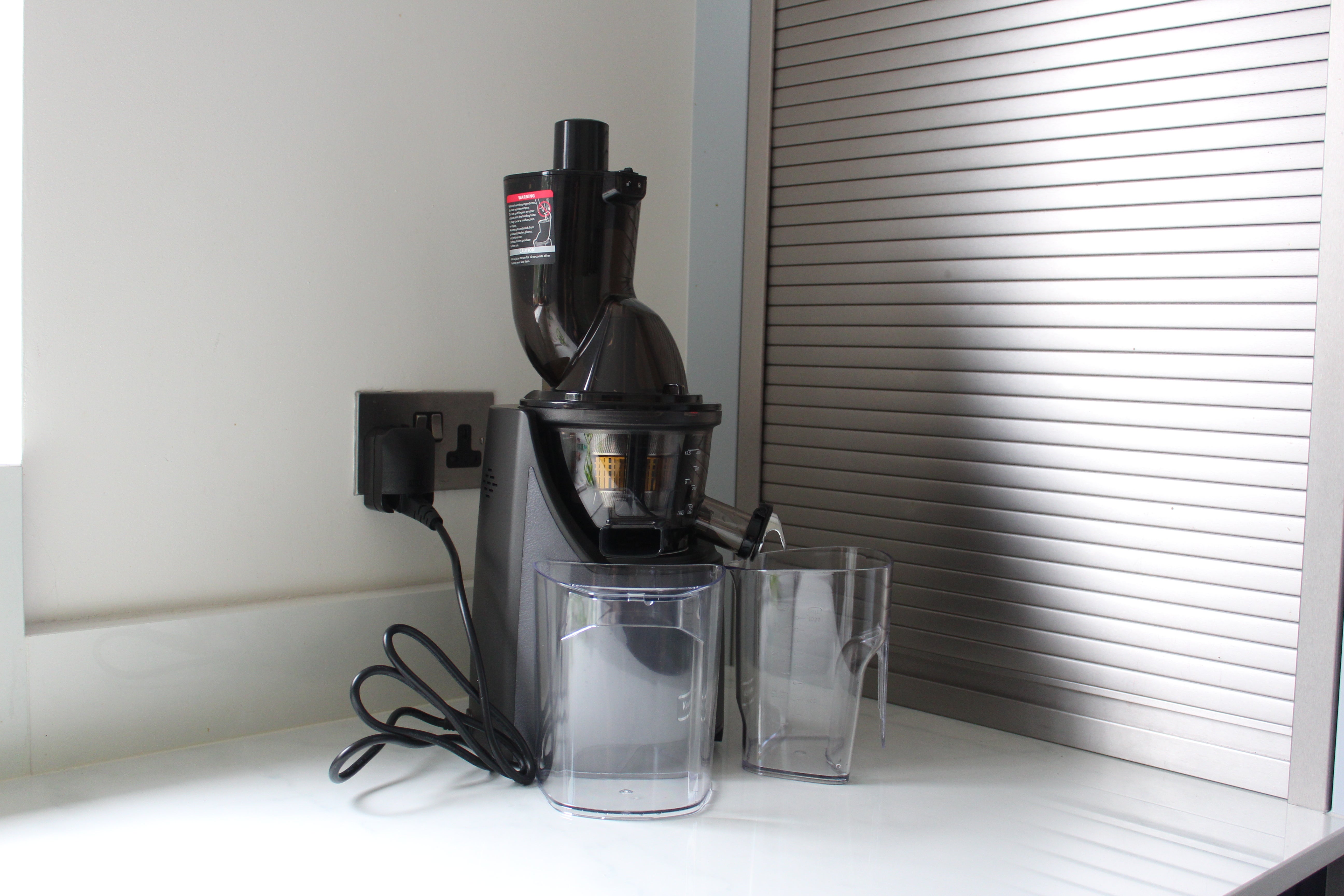 There are a couple of challenging design aspects. While it maintains the sleek lines of the appliance, I found it awkward to have the control switch at the back of the machine – it’s easy to flip it to reverse accidentally. It also has several parts to attach, although you can refer to the separate assembly guide until it becomes second nature.

I started by making spinach juice from the recipe book, which included an apple to sweeten the mix and advised pre-soaking of the spinach. Since the leaves were wetter, some became stuck at the bottom of the chute and couldn’t be moved with the pusher. I was hoping that the apple would help shift the leaves, but they remained stuck and had to be removed at the end. The wider feed chute allowed for the apple in halves, but not whole. This produced around 100ml of foamy juice (a strainer on the jug would have been handy), with relatively dry apple pulp and wetter spinach pulp remaining. 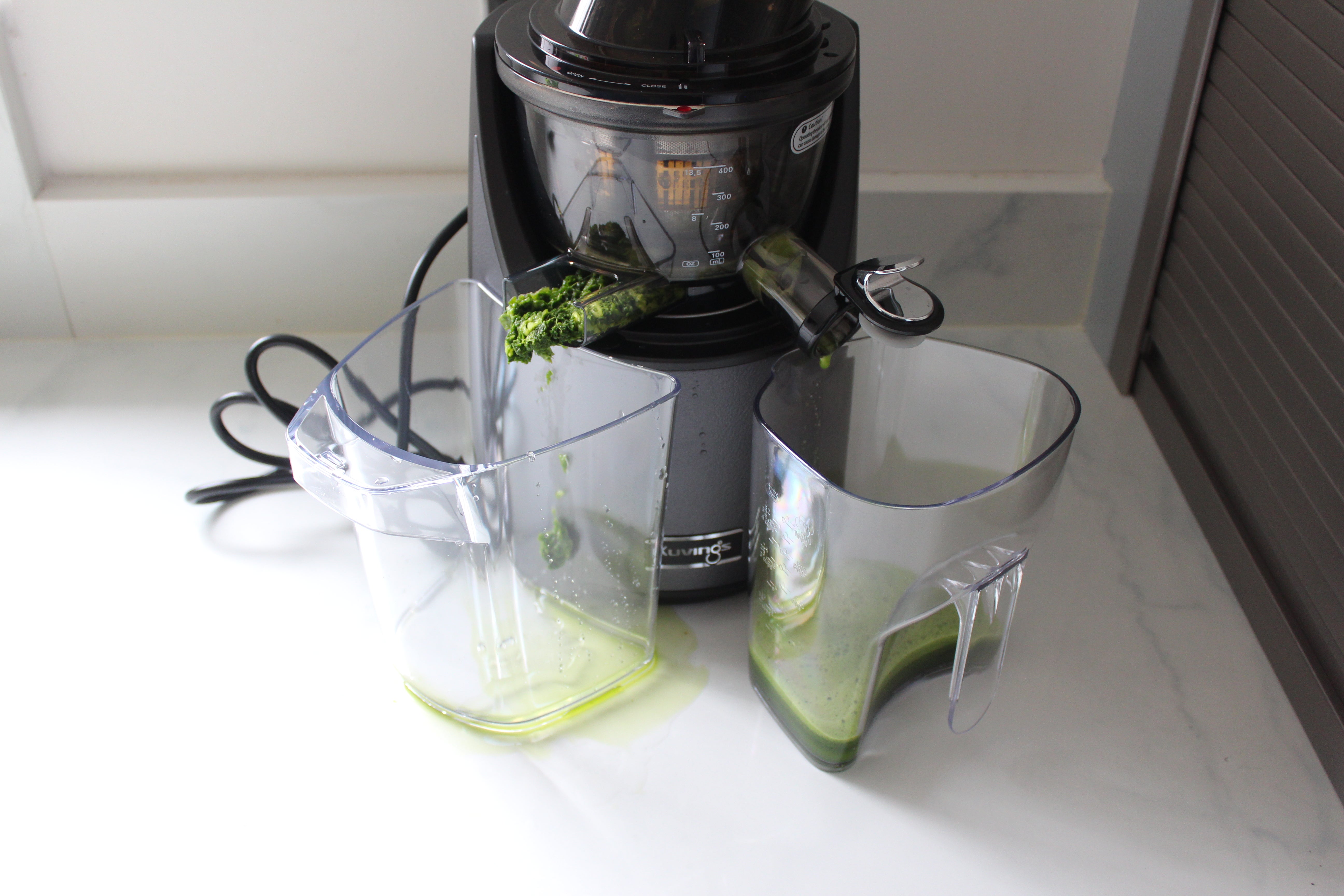 Next, I made orange juice using three peeled and quartered fruit. This produced juice with next to no foam. Since the spout continued to drip, the smart cap proved useful to keep the worktop spotless.

The cleaning tools came in handy for removing stubborn bits of pulp from the other spout. There was no pulp remaining in the orange juice, which had a sweet, refreshing taste and made about 250ml. Moving onto more fibrous fruit, I added pieces of pineapple with mango. While the rough pineapple skin had to be taken off prior to juicing, the softer mango skin could remain, with only the seed requiring removal. This reduced prep time considerably. I also included a piece of root ginger.

The pineapple was juiced easily, with only slightly damp pulp produced. The mango took longer, with a much thicker juice resulting but all the skin in the waste pulp. Some clumps of mango remained inside the juicer, around the top of the strainer, but most of the fruit was successfully processed. 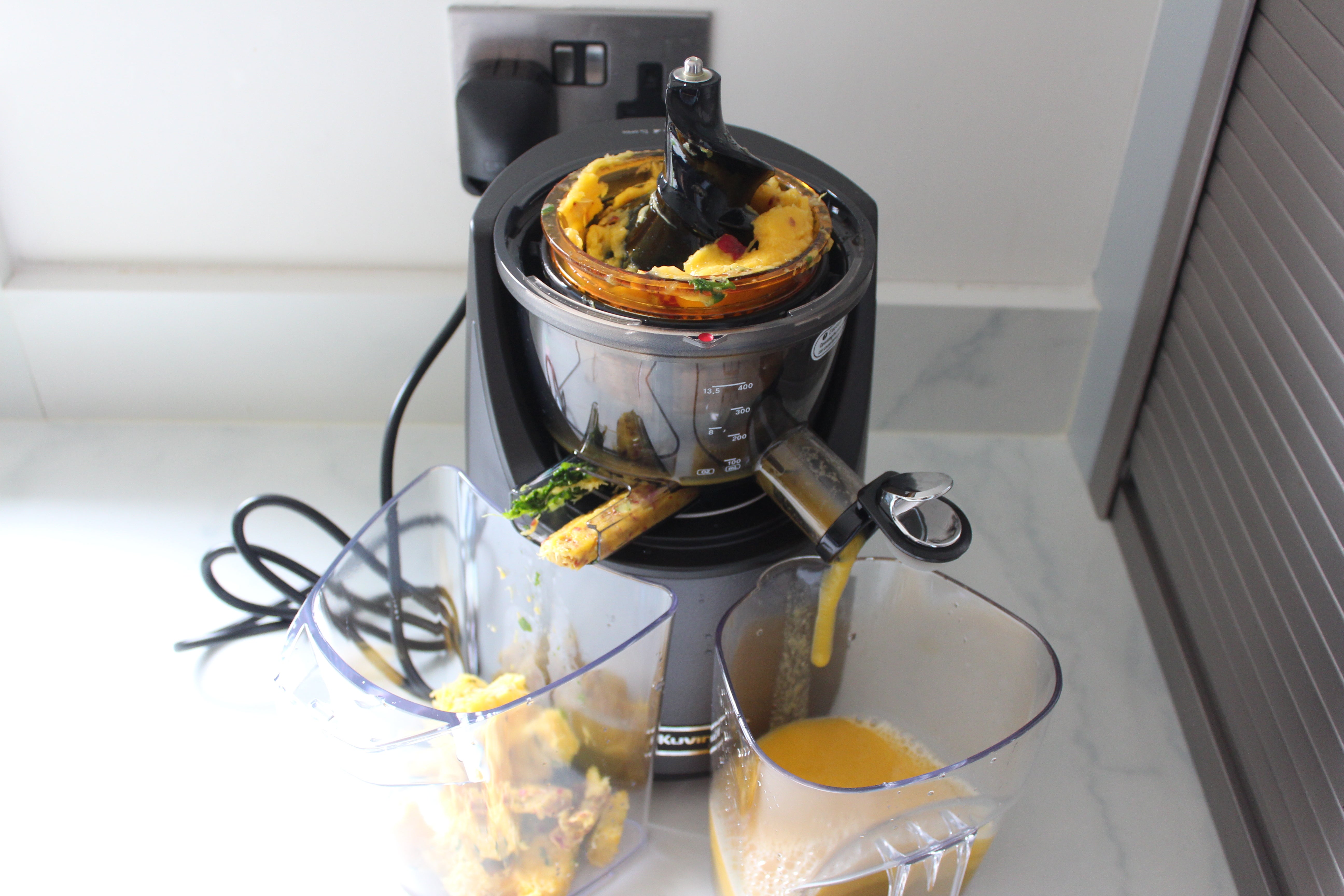 However, the ginger root became clogged around the screw and needed freeing and reintroducing a couple of times to extract the maximum amount of juice. This made around 400ml. 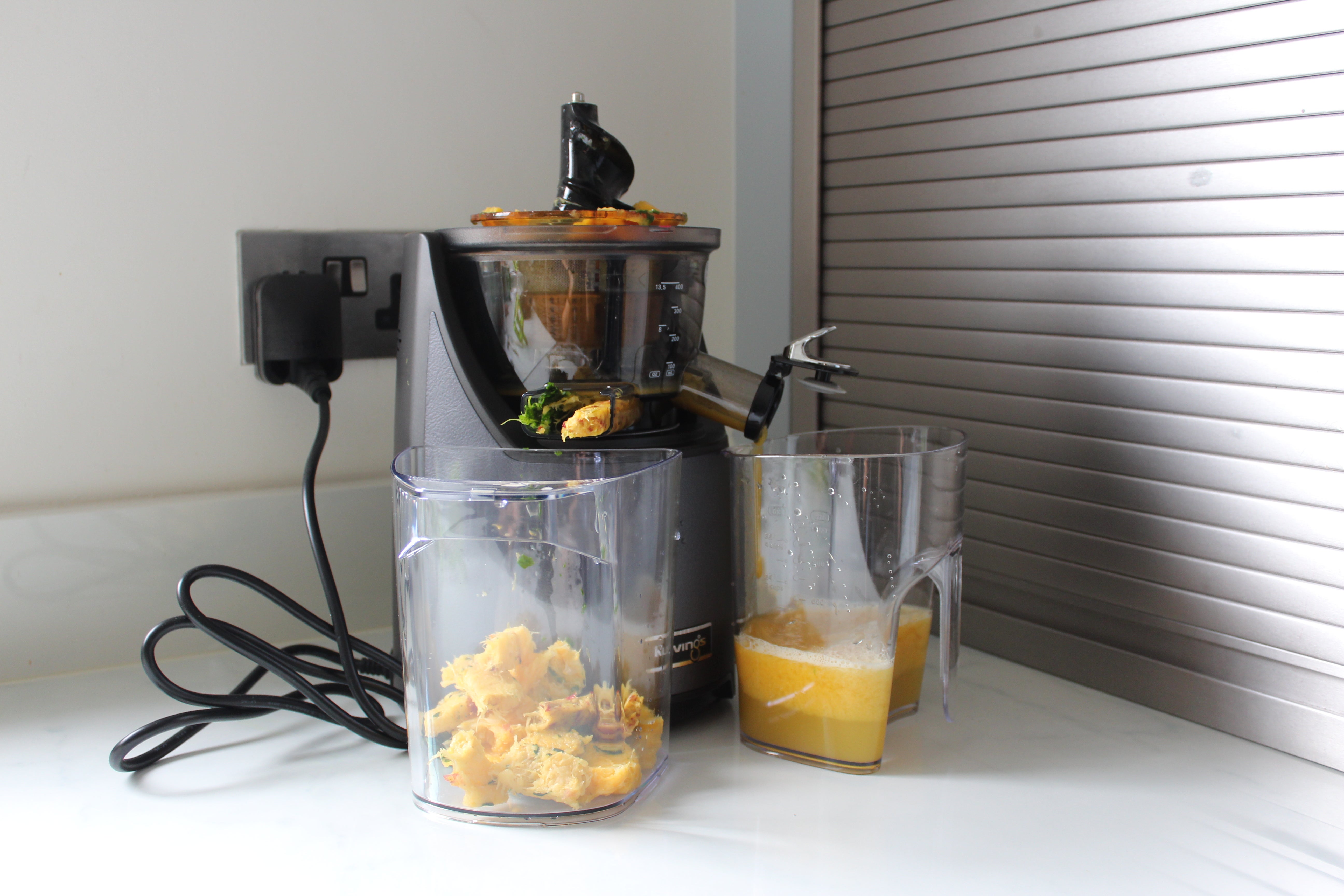 Finally, I made almond milk from the recipe provided, using 180g pre-soaked almonds with an equivalent volume of water. Adding water and nuts into the juicer proved messier, resulting in splashes on the worktop. However, the milk produced was only slightly thinner than the shop-bought variety, with the resulting dry pulp usable in other recipes.

This resulted in about 450ml of almond milk, making the juicer a great buy for those with specific dietary requirements. Although every effort has been made to simplify cleaning, all the parts need to be washed by hand, which was a chore. Some have a few crevices where debris gathers, but the brushes provided are perfectly designed to clear it. A thorough clean took me about five minutes.

As an incredibly efficient juicer, it’s hard to beat, but the Evolution is probably a better buy for a juicing devotee who wants to upgrade. Given its robust build quality and 10-year motor warranty, if it’s viewed as an investment in cost-effective fresh juice and eco-conscious packaging reduction, it delivers.

For the price, you’d expect at least one extra strainer, while a few dishwasher-safe parts would better convenience.

Nevertheless, if you want a machine that won’t struggle with any type of fruit or veg, the Evolution is the slow juicer for the job.

A durable cold-press juicer that’s just waiting to show you what it can do.