Philips is a big name in audio, thanks to its great range of Fidelio iPod docks, its portable music players and home cinema systems. However, it’s not particularly well-known as a maker of headphones. It offers plenty of models, but none have commanded the limelight in the way that Sennheiser and Sony models have. The Philips SHE9000 hope to change all that. They are fairly low-cost earphones with metal bodies.

Upgrading your earphones from standard bundled buds should be mandated by the government. This isn’t an audio snob thing – it’s because we’ve spent one too many a morning listening to a fellow train passenger’s music taste as it bled out from their awful little earphones.

This effect is at its worst with cheapie earphones because they’re not designed to isolate you from the outside world. As such, you have to turn up the volume to contend with ambient noise, in turn increasing how much sound leaks out. It’s a vicious cycle that ends with you going deaf, and possibly being beaten to death by fellow commuters. Earphones like the Philips SHE9000 are the solution.

They use rubber or foam tips to block off your ear canal from everything but your music. Like most budget pairs, the Philips SHE9000 earphones come with rubber tips, but they also include a single pair of Comply foam tips too. However, the tips are a little trickier than most to fit.

To get an optimum seal with these earphones, you have to get them to rest by the entrance to your ear canal – just jamming them in won’t get you a good seal. If you don’t like in-ear headphones that delve deep into your ears, this may be a positive thing, but we found it a bit fiddly. A standard selection of small, medium and large tips is included, so most people shouldn’t have trouble attaining a good fit in the end.

Another quirk of these earphones is that the cable uses two distinct finishes. From the right-angle jack up to the point where the cable splits into two – for each bud’s wire – it’s coated with fabric. This is traditionally used to cut down on tangles, and it works reasonably well here. The other part of the cable, though, uses a slightly rubbery plastic and is much more prone to working itself in a knot. There’s a little movable cable tie to let you try and keep this at bay. 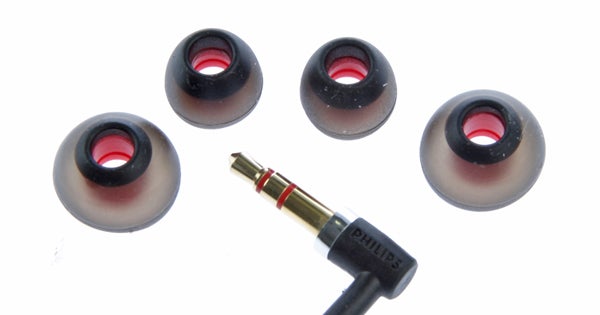 The buds themselves also use two different materials – plastic and brushed-effect metal. Much of the body has a layer of metal armour, leaving just the end usually covered by the rubber tip plastic. It’s eye-catching red plastic too.

These metal bodies should give the earphones better durability than the famously prone-to-falling-apart Sennheiser CX300 earphones, but the metallic construction isn’t too conspicuous in normal usage. The rounded design doesn’t show off the hardness of the metal too much, and these aren’t “bling” buds. But in our book, that’s no bad thing. However, one thing to note is that they don’t offer handsfree or remote control functionality for your iPhone or iPod, as some other pairs at the price do.

The Philips SHE9000 earphones haven’t seemingly been marketed or designed to outdo the budget market’s big names. They don’t offer the ridiculous bass that many entry-level IEM pairs strive for – but like the non-blingtastic looks, this isn’t a negative.

There’s a decent amount of bass on offer, but it’s reasonably well behaved and balanced, avoiding the boomy effects of basshead rivals. One point to the Philips SHE9000.

The problem is the rest. There’s little treble sparkle here, not much sense of dynamism and pretty unimpressive separation and detail. They sound pretty balanced next to other pairs around the same price, including the Jays a-JAYS Four for example. But they also tend to sound a bit dull, a tad boring.

The Philips SHE9000 don’t make any disastrously wrong moves, but their slightly bland presentation is perhaps worse than a plucky but flawed sound signature. Without a bombastic bass or much treble presence, they often simply sound rather small and bland. They’re warm enough, but often the warmth is cloying, muddling arrangements – and the treble doesn’t have enough bite to break through it. Vocals often end up getting a little lost in the middy mist, which we’d normally only expect from a bassier earphone. It’s a pity because they’re close to sounding good.

We don’t expect miracles at this entry-level point, but there are real crackers available at the same price. The Sennheiser CX300 and Creative EP-830 offer a good time for less money, and at almost £40 they also have to contend with some lesser-known alternatives like the Soundmagic E10 and HiFiMAN RE0, both of which are simply a lot better. 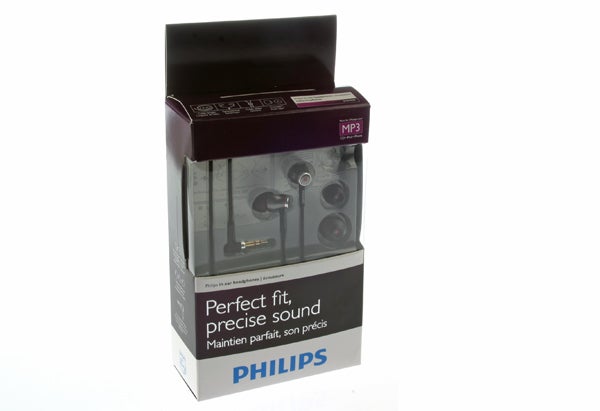 While the neat design and metal bodies work in their favour, that you can get better sound elsewhere for the same price seals the Philips SHE9000’s fate. Unless you find them at a significantly reduced price, we recommend looking elsewhere.

The Philips SHE9000 make a good first impression. They have metal-coated bodies, decent styling and a price that makes them attractive as an easy upgrade from bundled earphones. However, a muddled sound that doesn’t offer all that much excitement or detail means they perform less well than some similarly priced rivals.