Philips’s Fidelio range hasn’t grabbed the public’s attention as much as Bowers & Wilkins Zeppelin docks, but the top-end DS9000 sounds just as good as the big daddy Zeppelin, while costing less. The new Philips Fidelio DS9 is a mid-range model that shaves an extra hundred pounds off that dock’s RRP, making it a direct rival to the Zeppelin Mini. 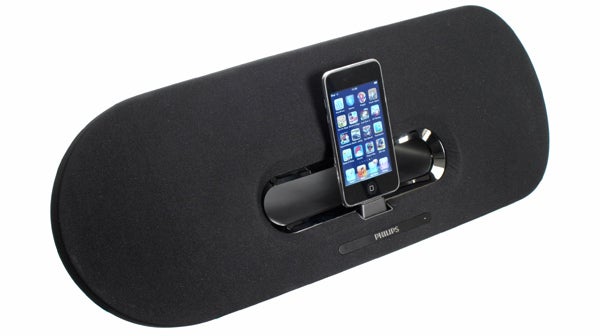 It’s a fair bit larger than the baby B&W though. The Philips Fidelio DS9/10 is a full-size dock that’ll dominate a mantelpiece or worktop, but it’ll do so in style. The front is covered by an opaque fabric layer that protects the drivers, and also provides the dock with a consistent, attractive look. With an iOS device docked, all you see is this material covering and some of the shiny finish that covers the cut out that runs through the middle of the device. It’s tastefully simple, more so than the TEAC Aurb or the somewhat ridiculous Bang & Olufsen BeoSound 8.

Although it looks like a bass port, this cut-out that runs through is mainly there for the look, not the sound. It comes in mighty handy though, doubling as a handle to lug the dock about with. The all-important iOS dock sits front and centre ahead of this cut-out, like a throne in a royal throne room. The connector itself moves forward and backward slightly, to accommodate a wide range of devices including the iPad, iPod Classic and iPod Touch.

There are just two controls on the front of the Philips DS9 – the volume buttons that sit to the left and right of the Philips logo. They light up when your iOS device is plugged in and control the volume level of the player directly, so there’s only one set of volume controls to worry about here. A simple, diminutive remote control is bundled, which lets you control playback and volume, and navigate directly through your iOS device’s music library. 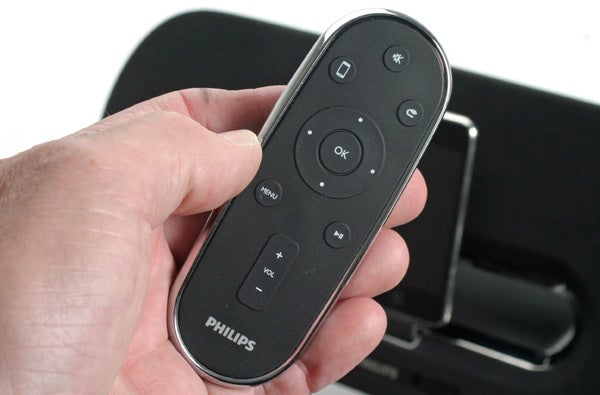 The back of the Philips Fidelio DS9 is finished in a wood-texture veneer. It’s not the most convincing wood finish, but its shortcomings are only glaring when you get right up close, which is likely to be a rarity when it’ll be facing the wall in most setups. Also around the back are two bass ports, one for each of the 8.9cm woofer drivers obscured behind the front grille. 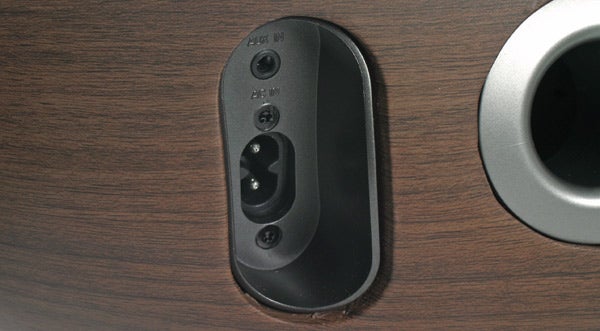 Like virtually all iPod docks, the Fidelio DS9 doesn’t offer much connectivity apart from the dock connector. There’s a 3.5mm aux jack input by the power socket, but that’s it. If you want Airplay, you’ll have to upgrade to the upcoming £699 Fidelio DS9800, wait for a new mid-range model or add an AirPort Express Base Station.

Although the Philips Fidelio DS9 has a one-box design, the selection of drivers mirrors a conventional hi-fi setup setup. There are two woofer 8.9cm woofer drivers and a pair of 18mm tweeters – slightly smaller in scale than the 10cm and 25mm units of the DS9000 and DS9010. The slightly curved design splays the trajectory of their output too, to widen the stereo image – achieving a good stereo effect is traditionally a problem that afflicts most one-box iPod docks.

We expected pretty good performance given the pedigree of the Fidelio series, the DS9’s size and price tag, and the dock doesn’t disappoint. It produces a rich, full, room-filling sound that marries great top-end detail with bass that’s powerful but fairly well-behaved for a set like this. There’s no booming bottom-end, unlike the Orbitsound T12, but the dock still creates enough of a rumble to render kick drum thuds with a ferocity that’ll shock the neighbours into complaining should you get near the half-way volume mark.

This is partly down to the size of the DS9. There’s a 3.5l volume cavity reserved for each bass driver, inside which those bass frequencies are brewed. It’s not just the driver itself that counts in sound quality – what happens to those sound waves after they’ve escaped matters too. Philips has tuned this dock very well, but we’d have appreciated some on-remote control over the bass level. There is a free iOS app available that offers a 5-band EQ, but we’d have preferred to have some proper control for all sources. 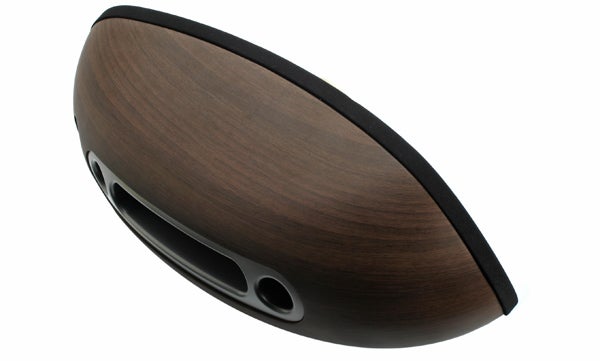 The Fidelio DS9 has the scale of its sound down perfectly – it’ll fill large lounges without a problem. What it lacks from its big brother the DS9000 and other more expensive rivals like the Arcam rCube is true high-end fidelity and resolution. It’s not far off, and can easily replace the average micro system without a drop in quality, but it misses out on the smoothness and increased resolution of the big boys. Of course, these big boys cost £100-200 more.

For all its refined looks, the Fidelio DS9 can play the party animal. It – thank god – doesn’t try to recreate dedicated subwoofer bass levels, but its sound is just fun, in a no-compromises good way. Aiming for this sound invariably ends up with a flab-tastic low-end – just as the all-too-keen party-goer ends up slumped in a corner, vomit dribbling from the side of their mouth after one too many vodka and cranberrys – but the Fidelio DS9 has aced it. It offers good times, all the time. 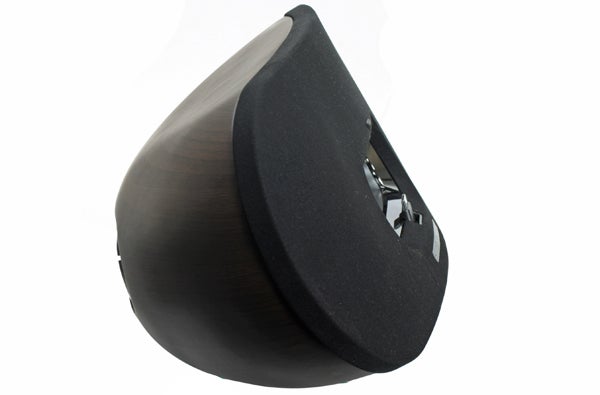 It’s a case of fine sound balancing, and is what makes sure that the dock doesn’t disappoint whether you’re playing rock albums or delicate concertos. This is why we’re not truly that fussed that Philips hasn’t include on-remote or on-device bass and treble controls.

The Philips Fidelio DS9 is a simple, straightforward device. It doesn’t pack-in a radio (granted, you can get internet radio through your iOS device), Airplay or much connectivity, but what it does do, it does extremely well. If you can stomach the extra cash, it’s worth considering the DS9000 instead, but make no mistake – this is an excellent iPod dock. 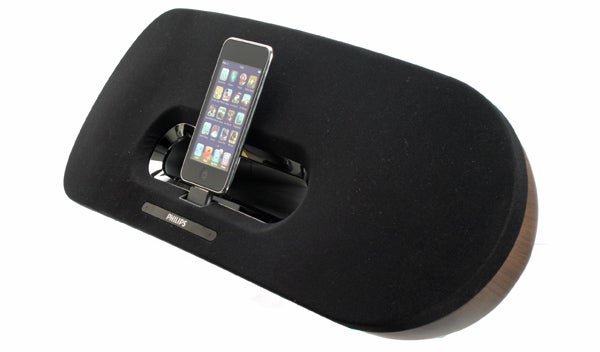 Aside from a handsome face the Philips Fidelio DS9 iPod dock doesn’t try to pack-in too many features other than great sound quality, but that’s fine by us. It’ll happily take on your iPod, iPhone and iPad thanks to the floating dock connector and its energetic sound fills fairly large rooms with no problem. If you can’t stomach the £400 price tag affixed to the very best iPod docks from B&W, Philips and Arcam, this is your best bet.