As well as having a more convenient design than your average projector, the Philips Screeneo HDP1590TV also gets rid of the problem of halogen-lamp projectors – longevity. The Screeneo uses an LED-based DLP projection system, rather than a traditional lamp. It uses a Texas instruments DLP chip, which is behind the tech that makes such a short-throw HD projector possible.

Where halogen lamps will generally last between 2000-3000 hours, Philips says the LEDs that power this one will hold up for 30,000 hours. That is more than 25 years when used for three hours a day, or just under three and a half years of constant use.

Using LEDs comes with several other benefits too. They are much more efficient than lamps, meaning that less of their consumed energy is given off as heat. While the Screeneo does get a little warm in use, it’s nothing that necessitates a big fan working in overdrive.

The Philips Screeneo HDP1590TV runs fairly cool and fairly quiet, then, which is a big plus if you’re looking to run this in a fairly small room that just wouldn’t make sense for a more traditional projector.

Its top-billing feature is no lie, either. With a throw ratio of 0.312, the Screeneo only needs to be 10cm away from the wall to create a 50-inch image or approximately 45cm to make the full 100-inch screen. Try and get larger than this and you won’t be able to successfully focus the image.

You’ll ideally want to keep the projector on a flat surface, but the Screeneo does offer keystone correction for image geometry correction. As long as there’s somewhere good to place the thing, you can get the projector setup in minutes. 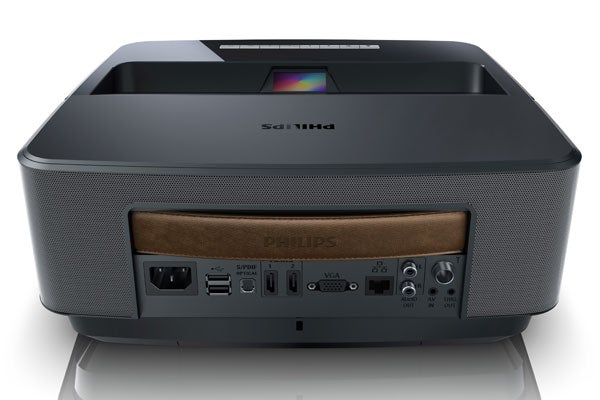 It does a lot, it’s convenient and it caters for an audience that isn’t really covered by normal projectors. But there is a sacrifice involved in picture quality with the Philips Screeneo HDP1590TV.

The most obvious is resolution. This is an HD Ready projector whose 1,280 x 800 native resolution is nowhere near the now-ageing 1080p standard. A 100-inch image in a normal living room makes the difference between 720p and 1080p obvious. The images also seem to be made deliberately soft to avoid obvious pixelaltion, but this is actually one of the more minor image problems.

Perhaps the biggest problem is contrast and black level are not good compared with a top £500-700 normal projector, leaving darker areas in images looking distinctly grey in a darkened room. The Dynamic mode has a reasonable stab at keeping decent shadow detail, but images may look a little flat compared with your TV if you have a high-end LCD or any decent plasma TV. Philips quotes a 100,000:1 contrast ratio for the Screeneo, but that is – as is so often the case with dynamic numbers like these – nonsense.

The Screeneo isn’t too hot at playing in a non-dimmed room, either. Its reported 700 Lumen brightness is pretty low for a projector – most start at around 2000-2500 these days. You will need to keep the curtains closed and, if possible, the lights off, to enjoy the Screeneo properly.

The Screeneo is 3D-ready, and you get two pairs of glasses in the box. However, the limited brightness is not good news for any 3D set as the glasses effectively ‘share’ the brightness between your eyes.

You get extreme convenience in some respects here, but there are some pretty serious compromises too.

We also noticed some chromatic aberration, particularly towards the edge of the frame. This is a negative optical effect of the serious lens work that goes into making an ultra-short throw projector, and it exhibits as a blue and red fringing around high-contrast objects in a scene.

There have also been some complaints about the colours of the Philips Screeneo from some quarters, but with a little bit of tweaking we got pretty satisfying results. It’s the black level and contrast that are the most serious issues here, as they limit how good a movie-watching experience the Screeneo can offer. 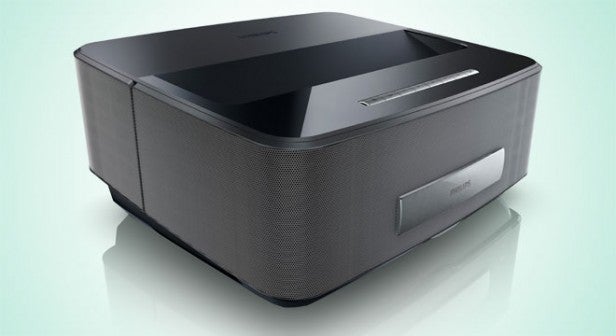 Should I buy the Philips Screeneo HDP1590TV?

In some respects the Philips Screeneo is a dream come true. It gets rid of almost every serious practical issue with projectors, while offering the same sort of screen sizes most of us could only dream of from a TV.

Philips has done a great job of making the Screeneo portable too. The carry case and handle are good enough by themselves, but having inbuilt speakers and clever Android brains make this quite a powerhouse.

However, if these practical concerns – in particular the relative portability – are not the top priority, we’d seriously consider a more conventional projector. Something like the BenQ W750 will perform at a similar level and costs a third of the price.

Still, if you’re playing to a less discerning audience, there’s a lot of fun to be had here.

The Philips Screeneo HDP1590TV is a seriously convenient, seriously fun projector. However, its image quality issues mean it’s not a winner unless convenience is king.

Next, read our best projectors round-up