What is the Orbitsound A60?

The A60 is a smaller and more affordable version of the airSOUND A70 soundbar launched in 2015. Available exclusively at Currys PC World, the A60 is equipped with Orbitsound’s patented airSOUND technology, which aims to make the idea of a listening “sweet spot” a thing of the past. It also comes with a wireless subwoofer and built-in Bluetooth.

It’s around £100 cheaper than the A70, which puts it in the same ball park as soundbars such as the Panasonic SC-ALL70T, Yamaha YSP-1600 and Samsung HW-K450 – so how does the Orbitsound measure up?

Orbitsound A60 – Design and Connections

Where the A70 was clad in lustrous high-gloss piano black, the A60’s wood enclosure sports a matte finish – one way in which Orbitsound has driven down the price. The other difference is that 60mm has been shaved from the width, dropping from 750mm to 690mm. 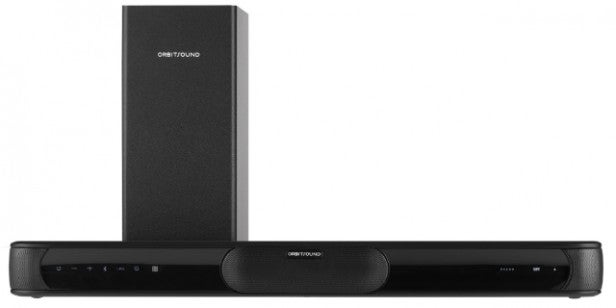 However, despite these tweaks the A60 still has an air of luxury, with bodywork that’s every bit as robust as the big-name rivals above. The cabinet feels rigid and sturdy, while the front and side airSOUND grilles are fashioned from black aluminium. It’s attractively styled, sporting alluring curved ends and two illuminated display panels either side of the front speaker grille.

The left panel contains a row of touch-sensitive controls, covering volume, Bluetooth and input selection, while the right panel displays the volume, bass and treble levels as a row of dots. These lights disappear after a few seconds, leaving you with a clean, minimal fascia.

The A60’s compact size is a godsend if space is tight, making it ideal for smaller rooms, but it was dwarfed by my 55in TV – aesthetically, it’s best suited to smaller sets. It can be mounted on a tabletop or on the wall, thanks to the keyhole fixings on the back.

Rear socketry is stripped to the bare minimum – optical and 3.5mm mini-jack inputs. The lack of HDMI sockets might be an issue for some people at this price. If this is the case, there’s a myriad other soundbars on the market that offer them. The A60 is consciously aimed at those who want a straightforward, single-cable connection to their TV. 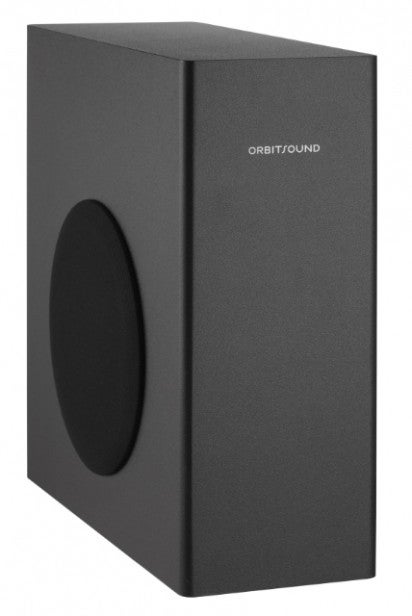 The subwoofer is similarly compact, packed into a slim, solid box and styled in a fetching shade of black. Combine this with its wireless connection and you shouldn’t have any trouble finding somewhere to place it.

The airSOUND tech is the A60’s key feature. Using special matrix amplifiers and side-mounted speaker drivers, it generates a complete stereo image that sounds the same regardless of your listening position. It eliminates the need to sit in a “sweet spot” as you would with a traditional two-channel speaker system.

The 3.1-channel A60 musters 300W of power, with 130W for the soundbar (80W front, 50W side) and 170W for the wireless sub. You can easily use the A60 as a music system thanks to the inclusion of aptX Bluetooth and NFC. There’s no onboard Dolby Digital or DTS decoding.

Orbitsound A60 – Setup and Operation

The absence of HDMI sockets makes setup remarkably simple, leaving you with a tidy setup at the end. Just run an optical cable between the A60 and your TV.

Bluetooth pairing is similarly easy (particularly if you avail yourself of NFC) and the connection is nice and stable – I didn’t experience any drop-outs or pairing fails. An optimised digital bandwidth makes the subwoofer’s Bluetooth connection solid too. 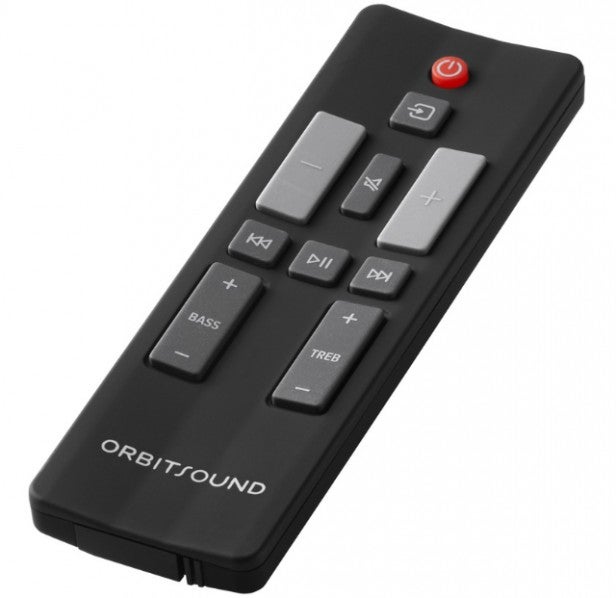 The A60 comes with the same remote control as the A70. It’s an impressive device, with its large keys and simplified layout. It has a tactile rubber finish that feels nice in the hand and provides good grip.

Helpfully, the A60 also boasts remote control learning, allowing you to adjust the volume with your existing zapper and saving you from constantly swapping remotes.

Like the A70, the A60 delivers an enjoyable performance that feels like a big step up from TV speakers. It isn’t without its problems, but the A60’s lively, immersive sound effortlessly breathes life into movies and TV shows.

Load up Jurassic World and the A60 conveys the soundtrack with pleasing energy and vigour. When the Indominus Rex escapes from its paddock, the A60 throws out the barrage of bangs and crashes with aplomb. There’s an incisive crunch as the beast slams into the closing gate, while the subsequent roaring, snarling and smashing is fired confidently into the room. 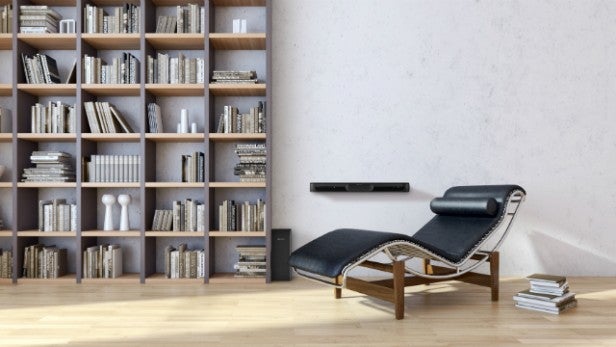 It’s the sort of feisty, well-defined sound that keeps you engaged in the action. The A60 offers terrific dialogue clarity too, making every line audible amid the carnage. Speech is focused and dynamic through the centre drivers, allowing it to be heard over in-room ambience – a sharp contrast with the flat, mumbled output of most TV speakers. The A60 also digs out plenty of top-end detail, such as rustling leaves and claws on gravel.

Meanwhile, airSOUND does exactly what it says on the tin. The side drivers produce an expansive stereo image that allows you to move around without any major shifts in tonality. It isn’t designed to deliver surround sound – if that’s what you’re after, try the Yamaha YSP-1600 – but play a movie and the soundstage has a lovely feeling of width and openness.

The subwoofer plays a pivotal role in the A60’s entertaining sound, lending punch and scale as dinosaurs romp around the screen. Footsteps make a meaty thump, and there’s a big rumble when the Mosasaur flops back into the water – but it doesn’t overpower the soundbar.

It also fleshes out less obvious stuff such as voices, ambience and Michael Giacchino’s score. The beauty is that you can easily tweak the bass level using the convenient controls on the remote.

There are some minor niggles, however. The A60’s top-end is a little bright at times; effects such as colliding metal and shattering glass have a slightly strident edge.

The soundbar’s limited frequency range doesn’t help matters, either. It generates practically no bass of its own, so the subwoofer has a lot of ground to cover. This means you don’t get the rich balance and cohesion up through the frequencies that you do from some sub/soundbar combos.

Another minor complaint is that the A60 struggled to fill my room unless pushed to near maximum volume. At half way to three quarters – what you might consider normal listening levels – I found dialogue harder to hear and movies less dynamic. The lesson here is that the A60 is probably best suited to smaller living rooms.

Should I buy the Orbitsound A60?

There are smoother and more cohesive-sounding bars on the market – but even so, the A60 is worth sticking on your shortlist, particularly at this attractive new price point.

This stylish, well-made unit benefits from Orbitsound’s clever airSOUND technology, which maintains its lively, detailed sound no matter where you sit – a godsend for off-axis listening. Movies sound exciting, played with all the verve and vigour you’ve been missing from your TV’s speakers, while the competent subwoofer adds impressive weight and scale to the sound.

Some people might bemoan the lack of HDMI inputs, while those with large, cavernous living rooms might find it a tad underpowered. But anyone else seeking a simple, clutter-free audio solution that easily spices up TV and movies would do well to give the A60 a whirl.