What is the Philips EverPlay BT7900?

Like batteries, washing-up liquid and pants, you get what you pay for when it comes to buying a Bluetooth speaker.

Despite an asking price of under £100, Philips’ BT7900 is compact, lightweight and weatherproof, plus its charging cable is disguised as a wrist strap. At that price it’s almost an impulse purchase – but is it a false economy? Design-wise, the EverPlay BT7900 resembles an oversized bullet, with two narrow rubber fins running perpendicular across the bottom to keep it steady. A micro-USB charging port and 3.5mm input are covered by a rubber flap at one end, while all the buttons are at the other.

For some reason, Philips has positioned them at a slight angle, perhaps to make them slightly easier to press as you reach round the side, but the fact that they’re on one end means you always have to look for the one you want, rather than finding it via feel alone.

It’s mildly inconvenient; but the functions you’ll use most often – play/pause (double press to skip a track) and volume adjustment – are likely to be controlled from your phone anyway. This is probably for the best since the rubberised buttons do feel a little cheap. The only buttons you’ll need to engage a finger for are power and Bluetooth pairing.

Turn the speaker on and you’ll hear a subtle bleep, followed swiftly by another trill to indicate it’s connected to your phone. The issue here is that it makes the same noise when you turn it off, so it can be difficult to tell what’s going on. Also, pausing the music causes the Bluetooth to disconnect after only a few minutes, so you can find yourself reconnecting it frequently – which is a pain. There is a wrist strap. The BT7900 seems slightly too large to require a wrist strap – you’re unlikely to take it on the bus with you – but it’s really just a clever way of including a charging cable, which comes out when you squeeze the two sides of the plastic bulb together. It’s a neat solution, but one that only really does half the job, because you still need to carry the plug part with you. Still, at least you’ll always know where the cable is.

That doesn’t mean it’s only pretending to be portable, though. It’s very much a backpack speaker: it’s lightweight at just over 500g and compact enough to take with you, even if it’s just for one or two nights.

Philips describes it as ‘weatherproof’ but it’s rated at IP57. In the real world, this means that if you knock it off your sun lounger and into the pool, as long as it doesn’t go too deep and you don’t wait too long to pull it out, the speaker should survive unscathed.

Its DuraFit outer coating is a plasticky mesh that makes the BT7900 a bit of an acquired taste. Given a choice I probably wouldn’t have picked the pink version; although the turquoise one is only marginally nicer. Fortunately, there’s a black one available too. At first listen, the BT7900 seems to lack body and excitement. Add a bit of volume, however, and its twin neodymium speakers get to work to liven things up.

This isn’t uncommon with speakers of this size, but it does mean the BT7900 sounds slightly disappointing below a certain volume. It isn’t without detail; it just lacks excitement. When the BT7900 really starts to sing, though, drums sound crisp and energetic, with impressive bass weight that doesn’t overpower the rest of the sound.

It goes loud, too, although push it too far and the sound starts to flatten, while the very highest volumes can be on the harsh side. This speaker isn’t designed to soundtrack parties – you only need to look at its dimensions to know that.

When it’s neither too loud or too quiet, the BT7900 is excellent. It sounds balanced and lifelike, with treble that’s sharp without being brittle, a well-articulated mid-range, and a good sense of space for a speaker of its size. With your back turned it’s easy to forget how small it is. When you consider it costs only £90, it’s even more impressive. 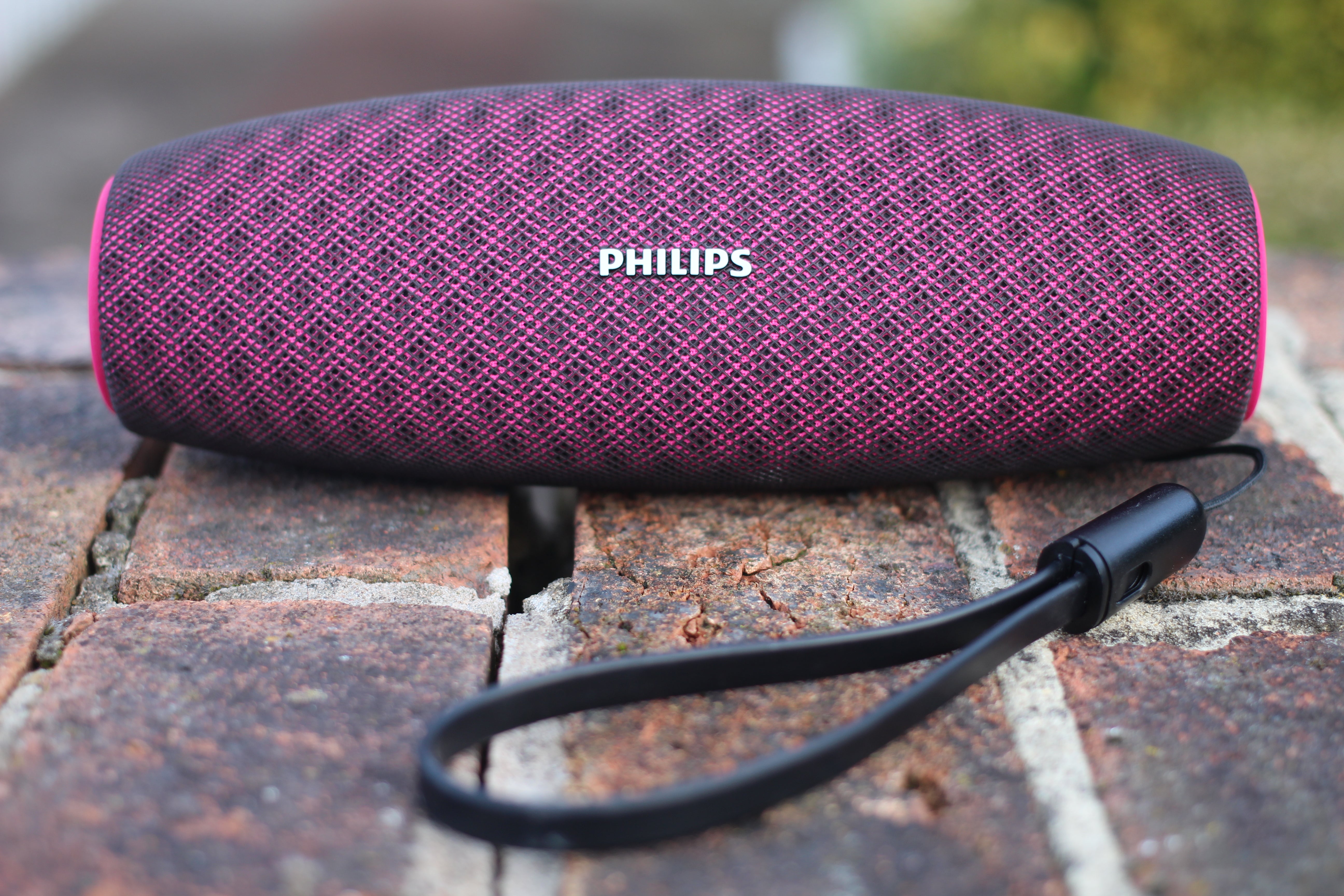 Philips claims a 30m range, which is about three times what you’d expect from most Bluetooth speakers. Perhaps in a wide-open space it would manage that. In a home, where there are doors and walls to contend with, we found it started to cut out at about half that distance. Bluetooth range isn’t something that ever really becomes a problem, so it’s hardly a deal-breaker. Just don’t expect to be able to wander off down the street with your phone in your pocket and for the tunes to continue playing.

As for battery life, a 100-hour standby time sounds impressive but it’s basically meaningless. In actual use you’ll probably get around nine hours out of  the Philips BT7900, which, unless you’re going to use it all day every day, is more than enough. Four little lights on the end indicate how much life remains, and it will take a couple of hours to fully recharge. 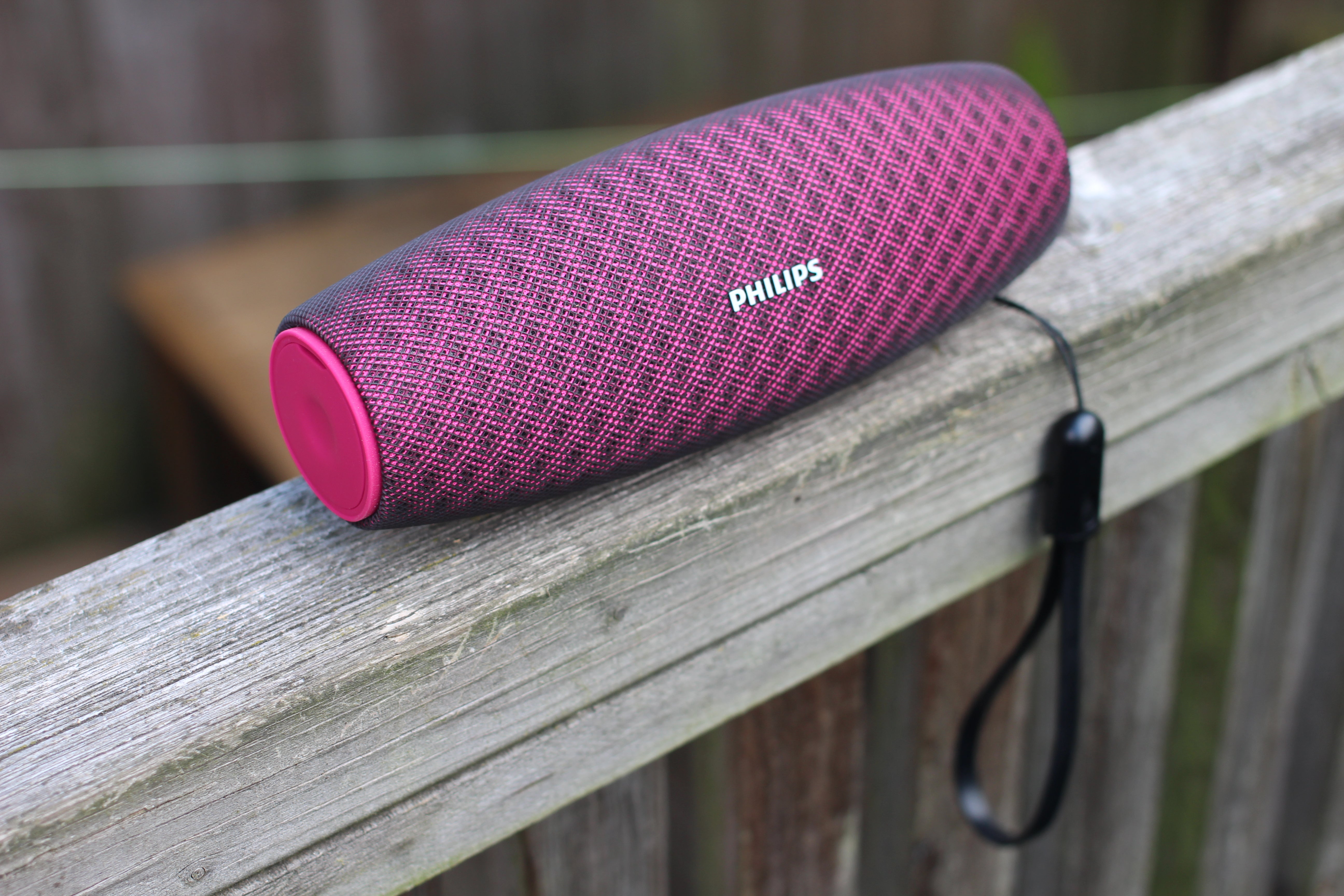 The BT7900 costs £90, and for about the same amount of money you could also go for UE’s tougher, more in-your-face Wonderboom or Jam’s more understated Heavy Metal – but it’s very hard to look past the Philips. It’s more portable than the Jam and sounds more natural than the UE, even if it does require a couple of notches on the volume dial before it really starts to shine.

Unless you spend significantly more money, the increase in quality with slightly more expensive speakers is marginal.

Turn it up and Philips’ BT7900 comfortably outperforms its price tag.