Having once been the exclusive domain of LG and Samsung, curved TVs now form part of almost every TV brand’s offering at this year’s IFA technology show, and Philips is no exception. Though actually the fact that the 55PUS8909C’s 55-inch screen is curved is just the start of its attractions, as it also sports a native 4K/UHD resolution, and even more intriguingly, a smart system powered by Android.

In fact, the 55PUS8909C is, along with Philips new 7000 and 9000 UHD TVs, the first Android TV in the world. So rest assured we’ll be coming back to this feature later. The first thing to say, though, is that the 55PUS8909C is quite a looker thanks to its ultra-slim frame and gleaming ‘contoured ribbon’ (in Philips parlance) stand.

Its design also benefits from Ambilight, which in this instance finds coloured light being thrown by rows of LEDs from the top, left and right sides of the screen. This light can match with startling accuracy the colour content of the images you’re watching, and it was interesting to note that the LEDs along the centre of the top edge are smaller than those at the edges, reflecting the fact that these central lights will sit nearer the wall behind the TV than those at the forward-curving edges. 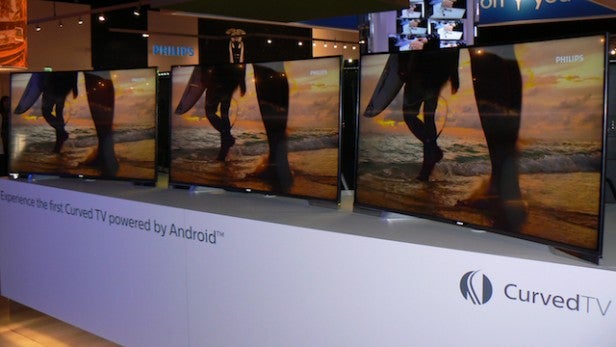 The screen’s 55-inch screen isn’t big enough to optimise either its curved or UHD attributes. But we guess it’s a relatively mainstream size, so it makes sense for Philips to kick off its curved TV ‘campaign’ in such relatively digestible fashion.

Sitting as it does just one rung from the top of Philips’ new UHD TV range, the 55PUS8909C is well equipped with picture technology. Motion should benefit from a 1000Hz-like processing system, there’s Philips’ Ultra Resolution processing for boosting the sharpness of both upscaled and native UHD content, and the latest version of Philips Micro Dimming Pro breaks images into thousands of blocks for more accurate processing and manipulation as well as taking into account your room’s light levels.

From what we were able to tell under the unusually well controlled lighting of the Philips IFA stand, all the set’s picture features seem to serve the TV well, as pictures looked exceptionally crisp, colourful, detailed and bright. Black levels were perhaps not the deepest we’ve seen and as discussed in an earlier feature, there are some issues with curving a 55-inch screen. But overall the 55PUS8909C’s picture quality looks very promising.

The Android features are a big deal, and it’s a real coup for Philips that it’s the first brand to launch an Android TV. We guess the brand probably had more reason to do it than most given the rather second-tier state of its previous Smart TV system, but that doesn’t alter the fact that Philips has done well to sort out all the inevitable Android on a TV teething problems to get to market first.

The first thing that struck us about the Android integration was how invisible it was – and we don’t mean that in a bad way! It’s actually good to see Philips mixing the Android apps and Philips’ own Smart TV apps in the same menu, rather than forcing you to jump into separate menus.

That said, the fact that Philips has decided to keep its previous smart apps at all seems surprising when you think how many apps Android TV can bring to the table. But here’s the thing. Like it or not the vast majority of the apps you can find in the Play store on your Android phone or tablet are as much use as the proverbial chocolate teapot when put on a TV. In fact, by the time the Android TV platform has used app header information (containing details on control systems, app purpose, graphical elements and so on) to filter apps out and then Philips has then screened the rest, you’re left with only around 200 compatible apps. 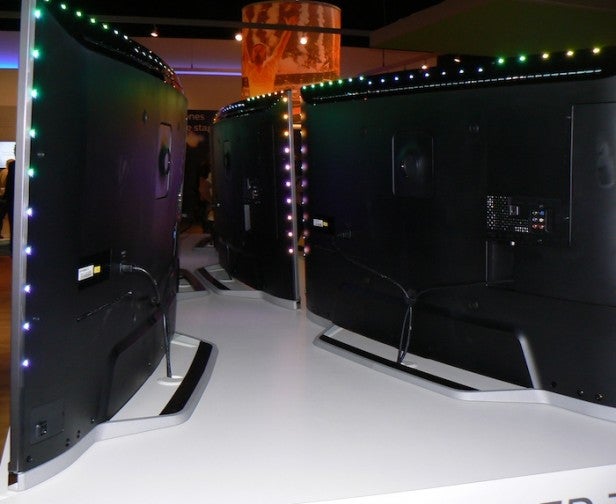 Having said ‘only’, though, 200 apps is a substantial a step-up from the previous lightweight Philips smart proposition. And of course, given the vastness of the Android development community, app numbers could sky rocket as awareness of Android’s TV ‘wing’ grows.

Examples of the sort of app developments we’re talking about that have already been created for the 55PUS8909C include integration with and control of Philips Hue lighting systems, and a home security, monitoring and home automation app from British startup MyLiveGuard.

The adoption of Android on its TVs has also enabled Philips to score a couple of major app hits. For the 55PUS8909C is the first TV with integrated Spotify Connect support and also enjoys built in compatibility with the OnLive gaming service. This latter system streams console-standard games to your TV, and has around 200 titles – including plenty of A listers – available at the time of writing.

Storage for apps you download, incidentally, comes courtesy of 1.6GB of built-in memory that can be expanded to 64GB via USB.

It’s perhaps a bit disappointing that the 55PUS8909C uses the 4.2 Jelly Bean Android platform rather than the upcoming Android ‘L’ system, which actually incorporates a TV-optimised interface. But at the same time there’s nothing inherently wrong with Philips preferring its own interface – especially when a combination of the seeming slickness of the Android platform and Philips using a Hex Core processor (another TV first) in its UHD Android TVs means that the new Smart menus whizz along without a trace of sluggishness.

We were pleased to see, too, that Philips has added more flexibility to its control system to greet the Android TV age. The 55PUS8909C’s remote carries a full QWERTY keyboard on its back, and lets you select options just by pointing at the right place on the screen. Plus you can now issue the TV with spoken instructions, and there’s even a little support for gesture controls if the mood takes you.

At the time of writing it’s not 100% confirmed that the 55PUS8909C will be getting a UK release despite the fact that it’s rolling into stores elsewhere in Europe and Russia as we speak. But our suspicion is that its combination of a curved design and, especially, its Android-based Smart Engine will make demand for it too hard for Philips to ignore.