Best of Both Worlds

Some people love curved TVs, and some people hate them. So on paper we guess it makes some kind of warped – literally – sense to have a flexible TV that can be set to be either flat or curved, depending on your tastes. Or even your mood, potentially.

Samsung’s bid at the current IFA show to simultaneously keep both the flat- and curved-loving parts of the TV marketplace happy is characteristically extravagant. For as well as successfully pulling off the technically remarkable feat of making a TV screen bend on demand, Samsung has gone and given that bendable TV an utterly colossal 105-inch screen. And then it’s given that 105-inch screen even more impact by fitting it atop a striking easel-like stand (similar to that supporting the brand’s 85-inch, £35,000 flagship UHD TV, the UE85S9ST TV), and building the screen to the 21:9 ultra-wide aspect ratio rather than the normal 16:9 one.

Not surprisingly the IFA crowds around this bendable behemoth are consistently large, and consistently cooing. 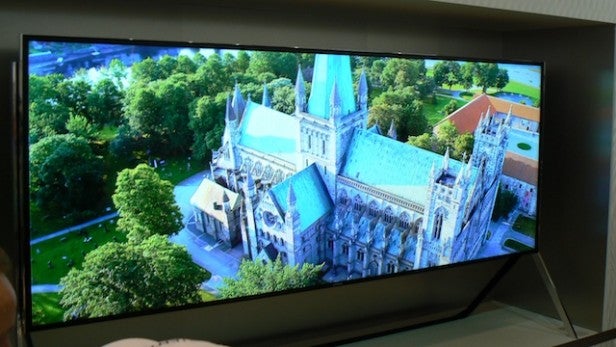 The display model shows off its bendable wares by continually shifting between flat and curved states via a complex series of motors and a cunningly multi-layered rear panel. The full range of the screen’s bending motion takes only seven seconds to complete, and takes place perfectly smoothly and almost silently.

The maximum curve tallies with Samsung’s preferred 4200R radius, and somehow the bend is achieved hundreds of times a day without seemingly taking any physical toll on the pristine finish of the screen’s frame.

It’s unlikely that Samsung’s 105in bending TV will go on sale, despite one or two people we spoke to Samsung’s IFA stand suggesting that it might be. But making such a TV a commercial reality is, of course, not really the point. What this screen is really all about is selling other curved TVs.

For starters, the extraordinary sight of such a vast screen continually flexing its curved muscles draws IFA show visitors and journalists like moths to a flame. And having got so many people standing in front of it, Samsung’s 105-inch bending TV just happens to be the perfect forum for pushing curved TVs’ potential advantages.

Why? For starters, we’ve often said that curving a screen makes much more sense with big screens than small ones, and TV screens don’t get much bigger than 105 inches.

The positioning of the 105-inch TV on Samsung’s IFA stand is also clever, as it forces people to watch it from a shorter viewing distance than they’d probably use in their own home. This means that when the screen curves forward, onlookers are standing in a sweet spot ideal for helping them experience both the extra sense of depth a curved screen can deliver, and the sense that the image has started to appear in their peripheral vision, enhancing their sense of immersion.

It’s interesting to note from your forced close viewing position, too, how the 105-inch bendable TV’s pictures look slightly brighter and more colour-rich – especially at their extremities – when the screen is curved than when it’s flat. This confirms the effect the curve can have on both focussing luminance more directly at you and slightly boosting contrast due to the curve working against LCD screens’ innate viewing angle problems.

The sheer enormity of Samsung’s new bending screen together with your forced proximity to it also disguises the negative impact the curve can have on image geometry. Especially since when you do find yourself looking at the screen from an extreme angle, you’re absorbed by the mechanics of the way the edge of the screen bends forward and backwards, not the potential trouble the curve could be causing to the shape of the image. 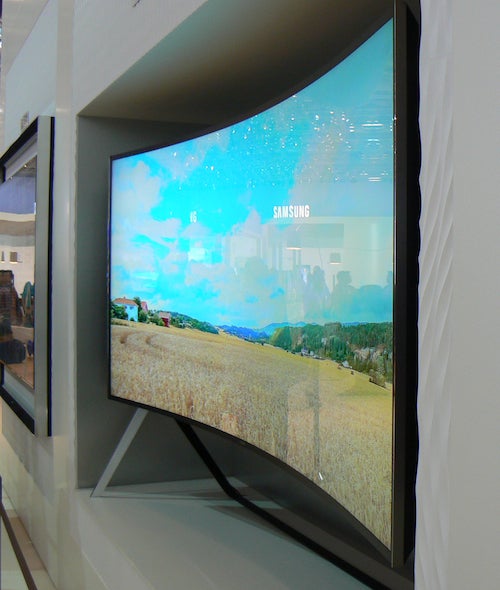 One final cunning thing about Samsung’s presentation of the 105-inch bending screen at IFA was that it was in a very bright area lit from above. This reduces the likelihood of you being able to see strong reflections on the screen compared with a typical domestic installation, so that you didn’t feel strongly aware of the curved screen problem of reflections being distorted across more of the screen than they are with flat TVs. You are thus freer to enjoy the screen’s sensational UHD detail levels, brightness output and colour saturations.

For the record, too, the 21:9 screen shape looks wonderfully natural at such an epic scale, making us hope that when UHD Blu-ray arrives at the end of 2015 Hollywood finally starts to include true 21:9 masters on the next-gen discs.

It’s hard to imagine that Samsung really expects anyone to buy its 105-inch bending TV, even if it puts it on sale – which it almost certainly won’t. But Samsung certainly does hope that the 105-inch model will have you instantly longing to get your hands on one of its smaller curved screens. And in this respect it does an almost unfairly good job.