The Pawbo+ is from Taiwanese firm Acer, probably best known for its laptops and other computing products. It’s a Wi-Fi-connected pet camera, not dissimilar to the Furbo and Petcube Play we’ve tested in the past.

Like the Furbo, the Pawbo+ includes a treat-dispensing feature, so it not only lets you check in on your furry pal, but also remotely send them some tasty snacks while you’re away from home. Taking the ‘play’ element from the Petcube, it also has a laser pointer for keeping your pets entertained.

While the Pawbo+ combines two of its rivals’ main features, the 720p image quality is a bit of a letdown, especially in low light, and the treat-dispensing might not be ideal for all placements.

While the Furbo went for a more discreet, vase-like design, the Pawbo looks a bit like a grinning cyclops with its front lens and opening where the treats emerge. It’s constructed from a white plastic that, while feeling a little flimsy on initial inspection, has proven reasonably robust during testing. My cats have realised there are treats inside and knocked it off my book shelf in the night more than once, and each time the Pawbo+ has lived to tell its tale. 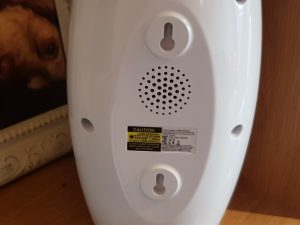 The Pawbo uses a DC jack connection, rather than Micro USB or USB-C as seen on many other pet cameras I’ve tested. So far that power connection has survived all of those knocks. I mention this because the Micro USB jack on the back of my test Furbo has broken, having taken one too many tumbles over the past few months. In the weeks I’ve been using the Pawbo+, it’s been resilient enough to cope with two mischievous felines.

The rear of the Pawbo+ has holes so you can hang it on the wall, but it’s a shame there aren’t any adhesive pads included to reduce the chances of it being knocked off a flat surface. 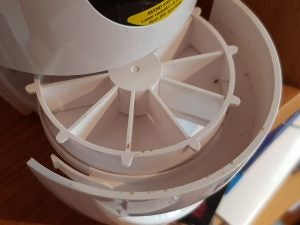 Another more disappointing element is the treat-dispenser, however. Loading it is a little more involved than simply filling the top hopper of the Furbo (as you would put coffee beans in a grinder, for example). Instead, you have to pull the front element out of the Pawbo+, which reveals there’s a carousel inside that’s broken into various segments, like a Trivial Pursuit piece, where you can put individual treats. You can fit two or three in each segment. The way the Pawbo works is that the carousel rotates, exposing each segment to the hole in front, so the treats can simply fall out. 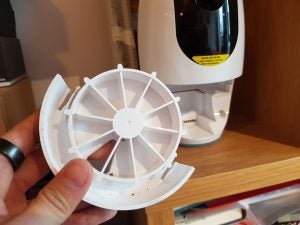 Setting it all up is at least pain-free using the Pawbo app on iOS or Android. Just plug the Pawbo+ into your mains power, make sure it’s on and then follow the instructions in the app. It’ll require you to connect to the Pawbo+’s Wi-Fi connection so you can put in your own Wi-Fi network details. There’s no Ethernet port, so be sure to place it within range of your wireless router. After this, you’re all set.

There is another frustrating element, however. If you’re wanting to access a Pawbo from a new device, you have to either have access to the QR code on the Pawbo or be on the same Wi-Fi network. There’s no user account you can simply access that has the camera associated. I found this out the hard way when I wanted to check up on our two cats while on holiday when I was carrying a new phone that didn’t have the Pawbo Life app already installed.

As mentioned, not only is loading treats more fiddly than with a simple hopper, but the fact that there’s no projectile element to the treat-dispensing can be a problem. If, for example, you have your Pawbo+ high up on a book shelf, which you might well want to do for the best vantage point for the camera, or simply to not have it within reachable distance of your dogs, the treats dispensed may never reach them. As the treats just drop out of the front chute, they would sometimes just get caught on my book shelf. Perfectly fine for my cats, but any other pet would be left disappointed. 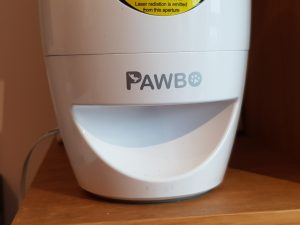 Plus the projectile treat cannon of the Furbo was fun for both my cats and for me watching them scramble off to find the treats that ended up halfway across the room. The treat-dispensing of the Pawbo+ is a damp squib by comparison.

The laser is controlled by an on-screen joystick, which I found preferable to the touch-and-drag controls of the Petcube Play. It made it easier to direct the laser where I wanted. However, the motor that controls the laser’s angle is very loud. In fact, the cats often seemed more distracted by the grinding sound of the motor than chasing the actual laser. The range of angle adjustment is also rather limited on the Y-axis, meaning you can’t aim particularly high. 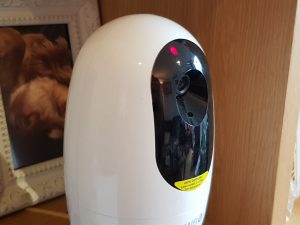 Otherwise, the app is well laid out. Whenever you access the video feed, the camera can play a chime from its speaker, letting your pets know it’s time for play or a snack. You can also record video or take a still image of the feed. Two-way audio is possible and there’s only a little delay. The speaker quality isn’t bad, either. 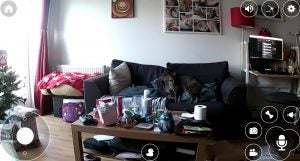 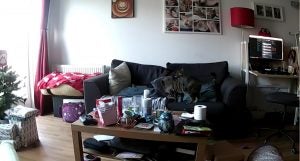 The actual video quality is a little underwhelming when compared to both the Furbo and Petcube Play, however. A lot of detail is lost in the shadows, so if you have pets with dark coats and dark furniture, it can be sometimes difficult to spot them. Low-light performance is also very poor compared to its rivals and the camera sensor can have problems with LED lighting such as the LIFX smart bulb I have in my floor lamp. Christmas lights also posed a problem. 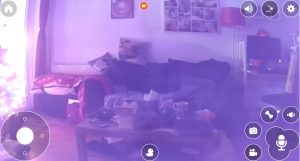 All things considered, for around £109.99 you’re getting a lot of functionality from the Pawbo+. With a pet camera, laser pointer and treat-dispenser all rolled into one, it’s great value. It’s just a shame that each function isn’t quite as good as I would have hoped. All of them have their slight flaws, but if you can look past them, the Pawbo+ is a decent all-rounder. 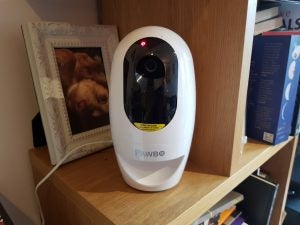 If you value image quality most of all, the Furbo or Petcube Play are both better in this regard. The Furbo is also the better treat-dispenser.

A good-value multi-functional pet camera, but slight flaws in each function mean it isn’t perfect.