What is the Furbo Dog Camera?

The Furbo is a treat-tossing camera for pet owners who suffer separation anxiety when leaving their beloved pooch at home – or don’t quite trust them to not cause wanton mayhem when left unsupervised.

Having tested a number of traditional Wi-Fi-connected home security cameras over the years, the Furbo is definitely one of the nicer-looking units I’ve seen. It’s tall, angular and finished in glossy white, with a tasteful removable wooden lid covering the top. The height is necessary to provide adequate room to store your pet’s favourite treats in the easily-accessible hopper. 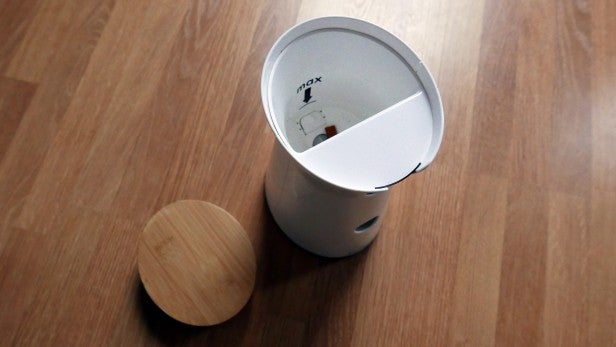 It’s from the front and centre of the Furbo that treats are projected, whereas the 720p camera is positioned towards the top. Behind the Furbo logo is a subtle colour-changing LED indicator to let you know when the Furbo is online; it also changes colour when someone is remotely accessing the camera.

If popped onto a shelf, the unit blends into the rest of a room. Placing it high is probably a sensible idea for a number of reasons, one of which being to stop inquisitive pooches from discovering the secret hack of knocking the Furbo over to access all the tasty delights within. 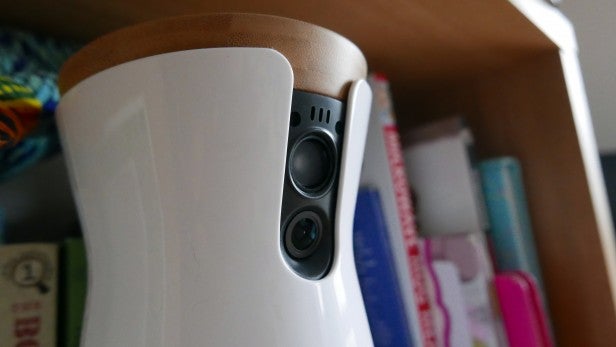 The second reason is that the wide-angle camera is aimed every-so-slightly downwards, making it a little obscured if placed on the floor. Better to take a higher vantage point to discover what your dog does during the day.

Setup is simply a matter of plugging in the included AC adapter, which has a micro-USB connection on the other end.

Once you’ve installed the Furbo app on Android or iOS, you’ll be taken through the pairing process – which uses Bluetooth to then give the Furbo your Wi-Fi details. It’s worth noting that the Furbo only works on the 2.4GHz Wi-Fi band, which should be better for wireless range.

There’s no wired Ethernet, so make sure you place the Furbo within range of your wireless router or it won’t only be you who’s disappointed by lacklustre networking. 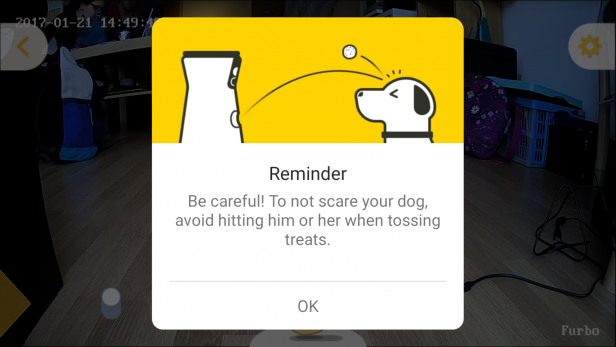 The Furbo app will then take you through a tutorial on some of the functionality, while also making you aware that you shouldn’t shoot your pet in the face with treats. Treats aren’t dispensed with any more velocity than is likely to cause mild annoyance, though.

Right, full disclosure time. I don’t actually own a dog since beloved Kiki went to doggy heaven. But what I do have now are two newly adopted kittens, named “(Girl) Steve” and “Montgomery Canal”, who essentially think they’re dogs and love treats being fired at them as much as any other four-legged friend.

In terms of the actual performance of the 720p resolution camera, I was pleasantly surprised. I have a Y-Cam HomeMonitor HD set up in my living room, and the Furbo actually outperforms it by a considerable margin. Video quality is far more crisp, brighter and more vibrant compared to the dedicated home security camera. 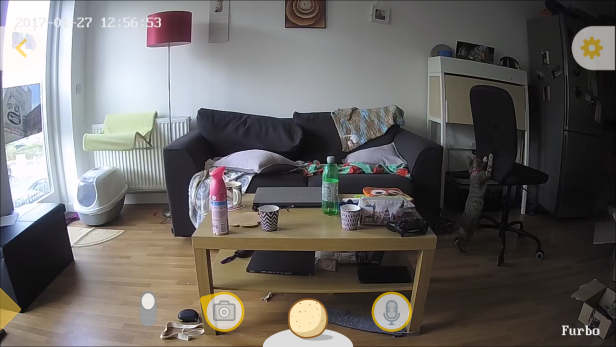 I spy with my little eye… someone using my desk chair as a scratching post again.

As a real-world example, I can actually identify which kitten is which by the differences in their coat and the collars they’re wearing. This is something I can’t do with the HomeMonitor HD. The delay in the video capture is also very short, so I have enough time to distract Monty from attempting to scale the curtains before it’s too late.

There’s also up to 4x digital zoom, which you use through intuitive pinch to zoom in the video feed of the app. It works about as well as you’d expect for digital zoom – namely the closer you zoom in, the worse the quality gets. 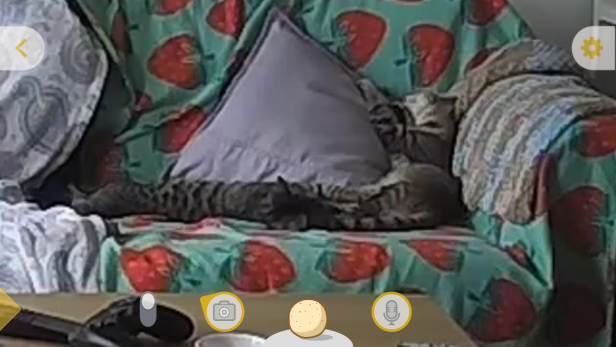 The wide-angle lens offers up a pretty good view of your room, provided you’re smart with your placement. However, for the price of the Furbo, it would have been nice to have some sort of pan and tilt functionality. Traditional home-monitoring cameras sometimes include this for the money, but then lack some of the obvious other functions present here.

There’s a night vision mode, which works equally as well. Again, the Furbo eclipsed the Y-Cam and made spying on the kittens at night a possibility from the convenience of my bedroom. 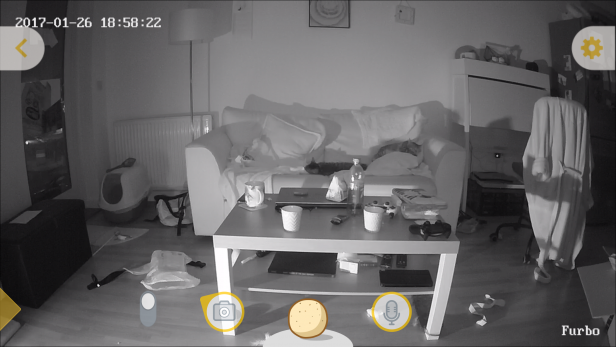 The audio capabilities aren’t quite as stellar as the video, however. The built-in speaker isn’t great, but then your pet probably isn’t going to mind too much unless they’re secretly hosting album listening parties while you’re out. Monty and Steve still came over to the camera when called. The microphone is possibly a little too sensitive, though, picking up the ambient whirr of my fridge.

There’s automatic bark detection, which can push notifications to your phone to let you know if your dog (or cat) is being disruptive while you’re out. You can then tune in and try to calm them down. But even at the lowest sensitivity setting it was getting triggered just by the sound of the cats play-fighting with one another, so I turned it off.

As for the headline treat dispensing, you’re able to use the app to record your own custom “Snacks Call” that plays whenever you decide to remotely deliver treats. Cue cutesy “Who’s a good boy” recordings. If you’re not that kind of pet owner, you can just use the standard sound. 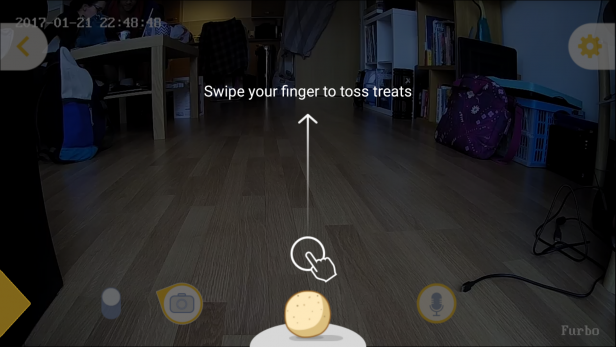 To toss a treat to your pet, simply slide the treat icon up in the app’s video feed. Depending on the size of the treats you pop into the hopper, the cannon might shoot two or three at a time. You’ll want to keep in mind the distance they can fly when aiming the Furbo, too; otherwise, treats might end up under the sofa, which in fairness might keep your pet occupied a little longer. Needless to say, Monty and Steve loved the treat dispensing feature.

Should I buy the Furbo? 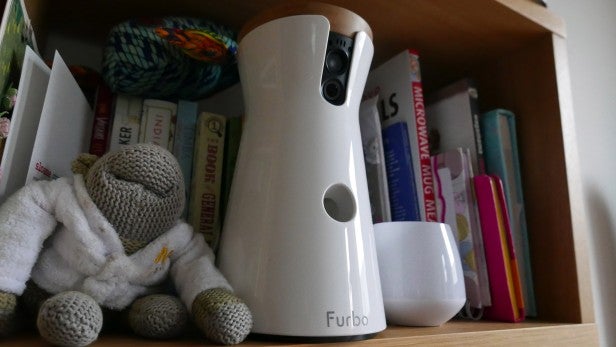 Does every pet owner need to have a gadget such as the Furbo? Probably not. But could I imagine living without one now? That also gets a “probably not”. The Furbo isn’t perfect for the money – I’d love pan and tilt functionality, in particular – but it does nail a lot of what most pet owners want.

The video quality is fantastic and the treat dispensing works, well, a treat. It’s also an attractive and well-designed pet gadget, which shouldn’t be overlooked for something that will be in sight of all to see. The peace of mind of being able to check in on your pets and interact with them is also something you soon realise you can’t live without.

However, as a result of its price, the Furbo is likely to fall into more “luxury” camp than “must have” for most pet owners. But if no expense is spared when it comes to your precious “Snookums”, you’ll find plenty to like about the Furbo – and there’s no doubt that tossing treats like Pokéballs can be a whole lot of fun.