Did you fully upgrade Caed Nua in Pillars of Eternity? Did you spend hours messing around on the War Table in Dragon Age: Inquisition? Did you install a mod so could own all the strongholds in Baldur’s Gate 2, even the theatre that’s supposed to be exclusive to Bards? Did you ever wish someone would make a whole game of that? If you answered yes to all these questions: hello me, why are you commenting on your own article? But also you might be interested in Pathfinder: Kingmaker.

Rarely has a colon so clearly delineated the two sides of a game. Pathfinder: Kingmaker is based on the pen & paper Pathfinder role playing system, which is itself an adaptation of Dungeons and Dragons third edition (to put that in video game terms, think Neverwinter Nights). At first that plays out exactly like you’d expect, a standard, not particularly imaginative isometric RPG with real time pause combat and an eccentric group of characters, including a splendidly oily, scheming little gnome who serves as an antagonist. Act One sends you on an epic quest to kill a bandit king in a place called the Stolen Lands. Then things start changing, as with the king dead you decide to set up shop in his lands and found your own kingdom.

Suddenly the game reveals a second layer, one closer to a strategy game than an RPG. There’s even a straight up city builder interface here, where you can plonk down taverns and blacksmiths in various towns around the kingdom. These towns will come to reflect your character and their moral choices, an evil kingdom might be stocked with bandits who raid their neighbours, while a lawful good one (yes we’re working with the old school D&D alignment system here) might be policed by shining paladins. 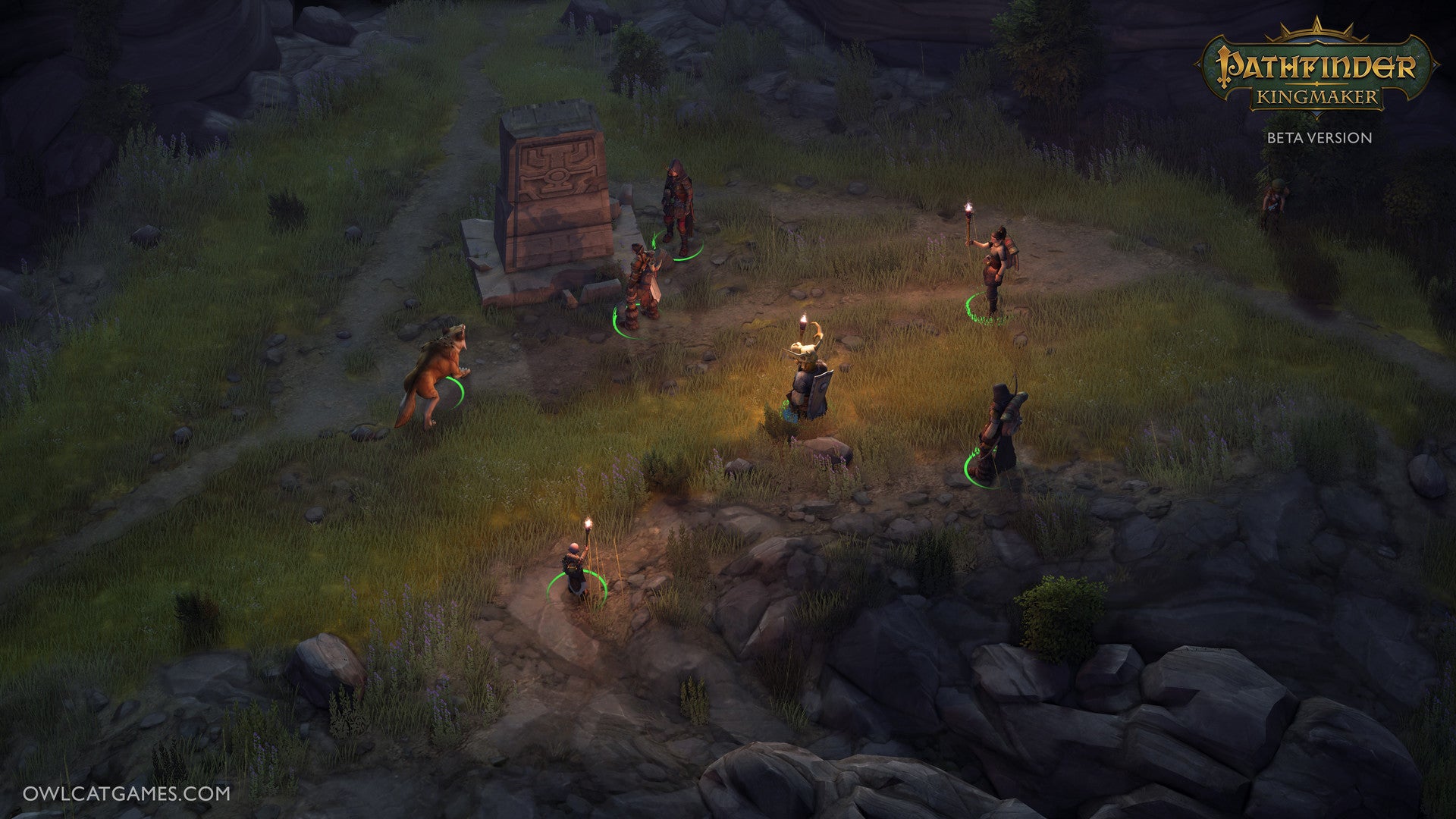 It isn’t just building though, as the kingdom will produce dynamic events that can be solved by assigning your advisors or companions, much like Dragon Age Inquisition’s War Table. One incident involved a group of villagers attempting to stone a young girl accused of Witchcraft. At first I assigned ruthless noble Landon to deal with it, as he had the highest stats. The result, he let them burn the girl and then fabricated evidence that she was guilty.

Horrified I reloaded and tried again, this time with the studiously lawful Valerie in charge. She stopped the mob and insisted on holding a fair trial instead, fortunately the girl was found innocent. Not every character can solve every problem, they have a specialty, like community, military, divine, etc. But the sheer volume of characters means you’ll nearly always have more than one choice how to approach a problem.

The whole thing seems like a very clever mash up of two video game genres, which is why it might surprise you to learn it’s actually a direct adaptation of a tabletop RPG campaign (the first I can remember since 2003’s The Temple of Elemental Evil) in which this entire system is played out with pen, paper and dice.

“When we were making Kingmaker every member of the team played the game.” Alexander Mishulin, the game’s Creative Director explains: “We have four groups running simultaneously playing through Kingmaker.” Alexander has a long history with both tabletop RPGs and their computerised equivalents: “In the 90s in Russia there were not a lot of personal computers, like none.” Alexander explains.

“My father was working in industry and they got several personal computers for mechanical calculations. Sometimes I was able to sneak into his workplace and study the computers, which of course meant playing a lot of computer games.” One of those games was 1991’s Eye of the Beholder, an ancient D&D adaptation that got Alexander interested in pen & paper roleplaying, which was almost as difficult to get hold of: “There were like two or three rulebooks in Moscow,” he says. “They were like precious relics.” 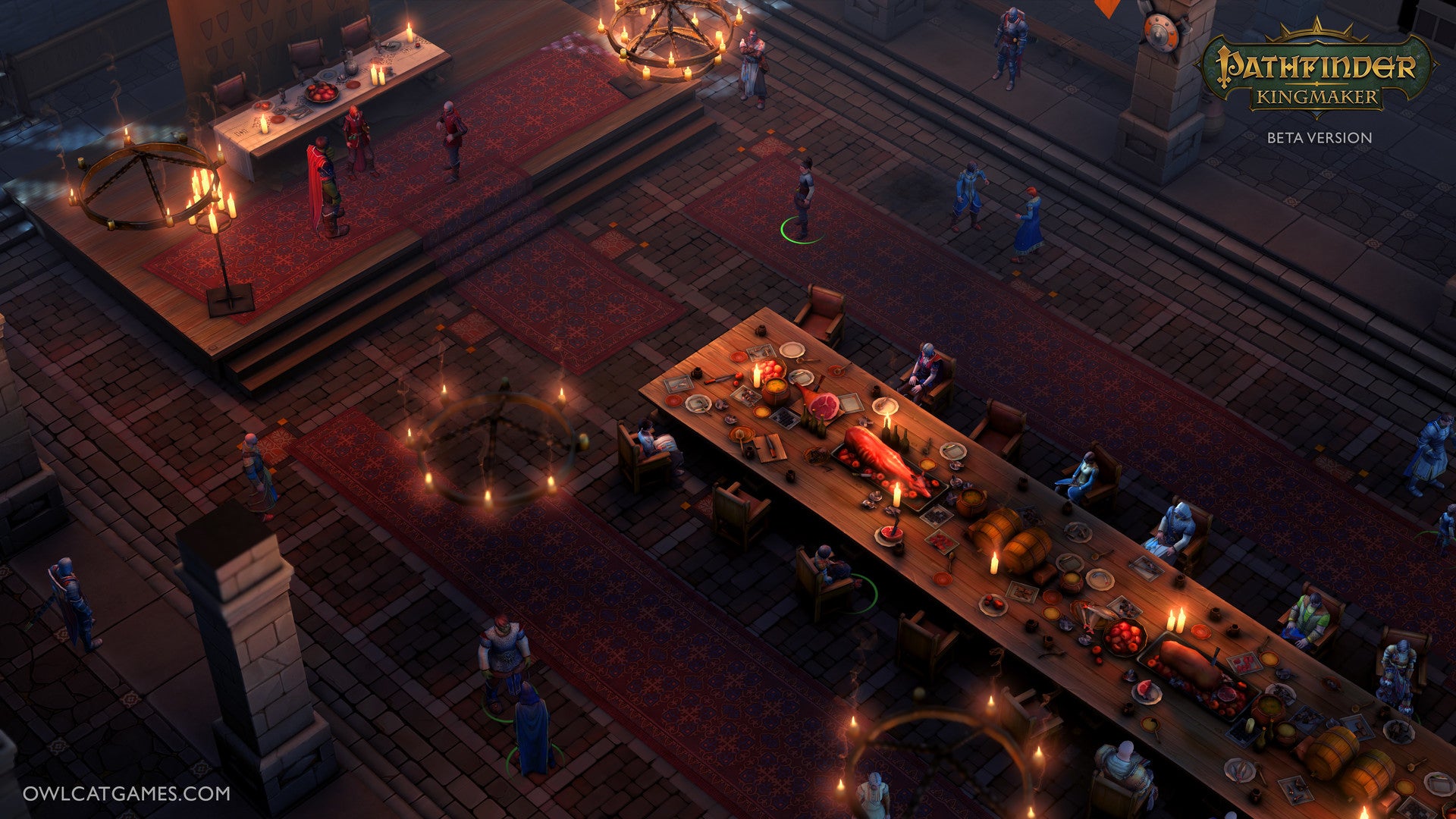 I’m familiar enough with the Pathfinder system to marvel at the notion of fitting an entire city building game into a D20 dice system, but Alexander takes pains to explain that they stuck close to the source material, with one notable exception. “There are no goblins in there.” He gestures to a set of books for the pen and paper version of Kingmaker (unfortunately all in German, so I have to take his word for it). “ When we talked to Paizo they said they know that in Kingmaker there are no goblins but goblins are so Pathfinder that you have to find a way to introduce them. We’d already played a lot of Pathfinder so we were familiar with Pathfinder Goblins“ He explains “They’re very different from the goblins of dungeons and dragons. They’re very charismatic, they run and mayhem, they love fire and burning stuff, they hate dogs, they think reading something takes away your soul. They’re really strange, charismatic creatures.“ Fans obviously agreed, as a goblin companion was one of the successful stretch goals for the company’s kickstarter.

The other thing Alexander is keen to impress on me during our talk is just how interconnected to the strategy and RPG layers are. After Act 1 is over you’ll be constantly pivoting between Kingdom management and questing, with each affecting the other. He gives the example of a troll infestation which threatens the kingdom, requiring a quest to resolve it. You have three in game months to achieve this, or you’ll get a hard game over. “It is part of the story as well as part of the game, and because it’s part of the story the game is over if you lose your Kingdom.” 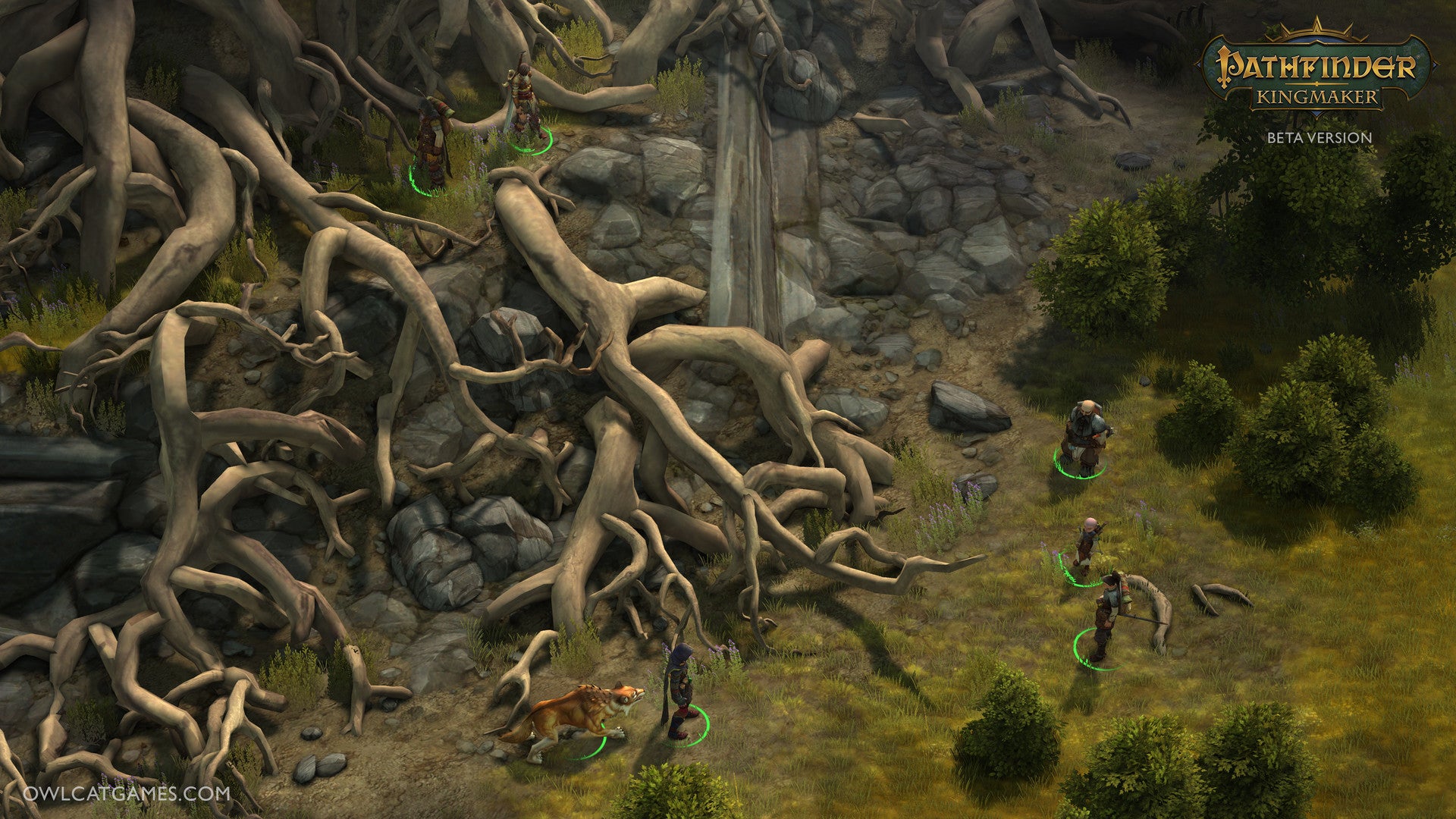 “But we do understand that some players don’t like the strategy game layer.” he adds “There is a special mode in settings where you can place your kingdom on automation. Most of the decisions will be taken out from you, you will still be speaking with NPCs about quests and side activities…. All of the decisions all of the events will be taken out from you and you will play with the kingdom in the background.” By the same token the difficulty level is highly customisable, so those who are more interested in the strategy layer can turn on “auto-level-up”, drop the difficulty and focus on kingdom building.

But the real fun seems to come from when the two overlap, when your questing overturns a person or item that helps your kingdom, or your artisans craft a great magical item to help your adventure. “The story of the game is the story of the kingdom” says Alexander. Finally, obsessive castle building an be more than just a sidequest.