We first laid eyes on Parrot’s fixed-wing Disco drone way back at CES, but we’ve had to wait with bated breath until now to actually take one to the skies. I got a chance to pilot the Disco at Kempton Park Racecourse and boy was it worth the wait.

The Disco is a departure from Parrot’s more familiar Bebop quadcopter drones and its design is all the more exciting for it. It stands out in a market now awash with samey drones.

Calling the Disco a ‘fixed-wing’ drone actually does it a slight disservice as the wings actually detach for easier transport. They click into place with satisfying ease and leave it looking like something from the US military.

Lift the cover of the main unit and you’ll find the removable battery and the Parrot C.H.U.C.K (Control Hub and Universal Computer for Kit, a terrible acronym), essentially the house for all of the Disco’s sensors and camera. Around the back you’ll find the two-blade propeller that’s spun by a brushless engine. 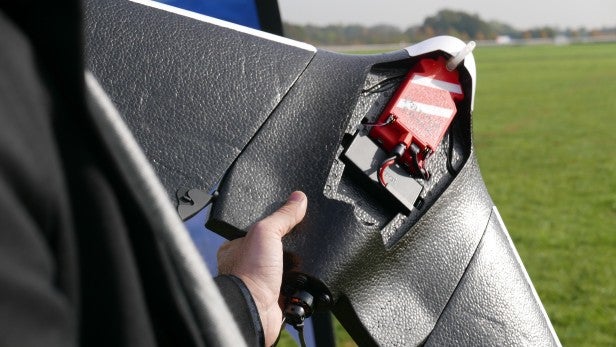 The Disco measures 115cm across and 58cm in length, weighing just 750g. The weight is helped by its expanded Polypropylene construction that’s reinforced by carbon tubing. It feels lightweight yet still robust enough to take a knock or two, which it certainly did in testing.

As such, it’s easy to hold the Parrot Disco one-handed, which is what you’ll need to do to launch it into the sky. A bit like throwing a frisbee, you hold one of the wings with one hand, fire up the rear propeller by tapping the Take-off/Landing button on the Skycontroller 2 remote control, then toss the Disco away from you.

It’s perhaps not quite as simple as that description in reality; my first attempt went nose first into the grass, unceremoniously detaching the wings, although in truth this was more user error. The Disco survived its meeting with the grass without any problems at least. It turns out launching takes far less force than I thought. 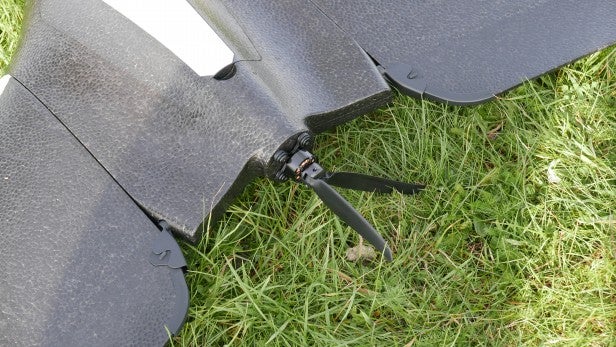 It wasn’t helped that the part of the wing you grip is quite thick, making it difficult to keep hold of with my Donald Trump-sized dainty hands. This won’t be a problem for everyone. The second attempt fared far better. In fairness, I was the only one at the hands-on event who managed to make a pig’s ear of the launch and it’s not hard to pick up the knack for it after an attempt or two.

Once it’s up in the air, the Parrot enters an orbital standby mode where it circles around you at 50m above the ground. By default this is within a 60m radius but I was told you can adjust this to be larger or smaller. This is the Disco’s equivalent of a quadcopter’s hovering, where you don’t need to have any user input. It does mean you’re going to need a more open space than a standard quadcopter, however.

The orbital standby mode is designed to reduce any panic once you’ve set off. The Disco isn’t going to launch and then fly off like a paper plane never to be seen again. It’ll just continue to orbit around you until it receives a user input. You can also manually trigger the orbital standby mode at any time by tilting left or right on the left control stick on the Skycontroller 2. 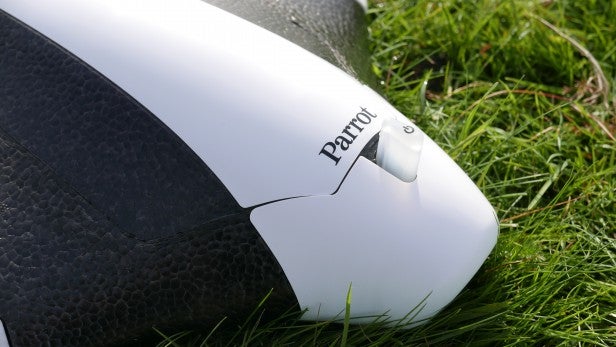 On top of the Disco is a Pitot tube, which provides the on-board information around the Airspeed to an accuracy of 0.5m/s – similar to their implementation in aeroplanes. The Pitot tube also acts as the on and off button.

There are some clever algorithms being computed by the C.H.U.C.K that ensure the Disco doesn’t stall while in the air, no matter how you fly, so you avoid the terrible flashbacks to Microsoft Flight Simulator. It’s able to slow to a gliding speed of 18 mph or, if you’re brave, you can accelerate to 50 mph.

The Disco is supplied with the Skycontroller 2 remote control, which uses MIMO Wi-Fi to communicate with the drone, and has a theoretical range of 2km. It feels a lot like an Xbox controller and is comfortable to hold. 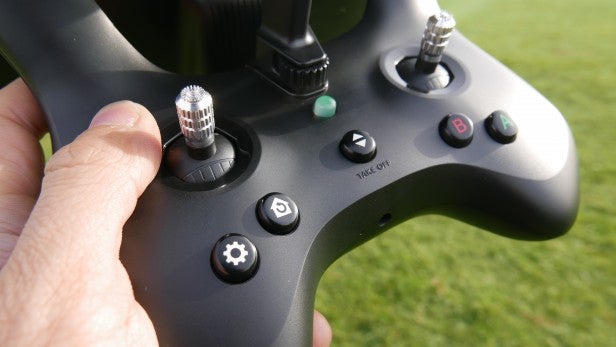 Piloting the Disco really was incredibly simple and no amount of slowing down, speeding up or adjusting altitude caused it to stall or falter. It’s great fun flying one around even though the first few minutes are a little anxious.

If you’re a more adept pilot, the Disco is also compatible with third-party remote controls but you’ll need to attach an optional RC transmitter to the C.H.U.C.K. The Disco will then be in Manual mode where there’s no limits such as distance from the ground.

When you’ve had enough time in the sky, landing is as simple as take-off. Just hit the Take-off/Landing button again and the Disco automatically inclines the flaps on its wings, descends to 6m in altitude and the engine thrust reverses to reduce the speed for a smooth landing.

The Disco is using signals from its altimeter, ultrasound sensor and vertical camera to aid in landing, too. The rear propeller also folds flat to avoid any damage during landing. All in all, the landing is as graceful as you can expect, although it’s worth noting I only tested it landing on grass. How it’ll fare on a harder landing remains to be seen. 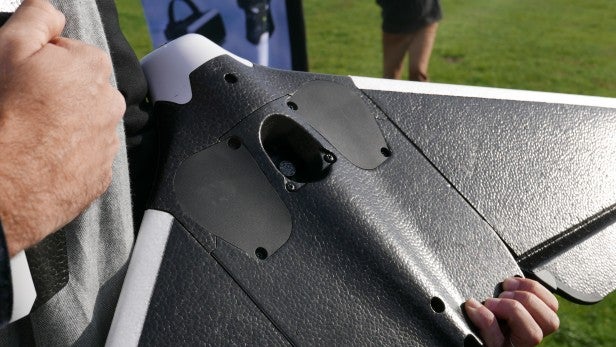 There’s a Return Home function that uses the GPS and GLONASS, and you can also set a pseudo-geofence mode to stop the Disco getting away from you in its companion app, called FreeFlight Pro. The app can also show you historical flight data, such as mapped paths, speed and distance.

You can also pre-programme flights and define waypoints before setting off by using Parrot Flight Plan.

One of the best parts of the Disco is the battery life of 45 minutes, which is more than most drones available. 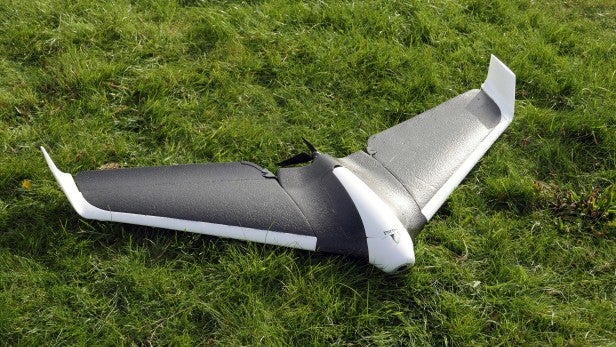 The Disco is equipped with a 1080p/14 megapixel wide angle front camera that uses a 3-axis gimbal for stabilisation. Footage and photos are saved to the internal 32GB of storage. There’s no SD card expansion.

I haven’t had a chance to look at any of the footage recorded during the test day, but did see some example videos shot on the Disco. When moving forwards footage looked stable and steady, but it’s worth noting that due to the nature of a fixed-wing drone, any turns are a lot more jarring compared to a quad-copter. Like a plane, the Disco tilts on its axis and can make sharp turns that obviously puts the horizon askew before it levels out again.

It certainly makes for a more exhilarating flying experience but in terms of video it’s far steadier and professional-looking from a quadcopter. I’ll update this hands-on if I can get hold of some of the video from the day. 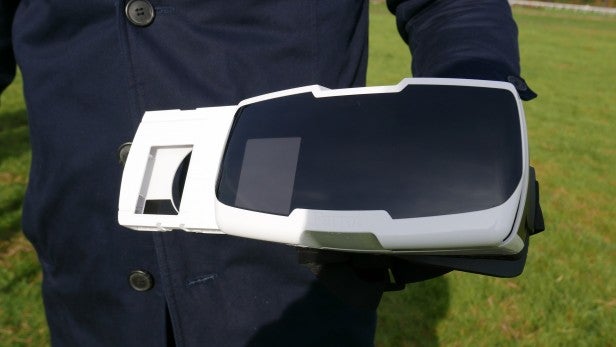 As with most new drones, there’s a first-person view (FPV) headset for the Parrot Disco. The best thing is that it’s included in the box, too. It’s not as fancy as the optional DJI Goggles available for the Mavic Pro, because it requires you to use your smartphone, much like a Samsung Gear VR. You insert your chosen smartphone in and connect it via a USB cable to the Skycontroller 2.

You can then get a direct bird’s eye view of the front camera, streamed at 720p resolution (although the camera can be recording in 1080p). You get useful telemetric data as a HUD as well as a radar.

Of course, image quality will be dependent on what smartphone you choose to use, so it’ll help to use one with a high pixel density for the best experience. I tested using an iPhone 7, which looked rather grainy. At greater distances, the video stream would also begin to break up, freeze and show artefacting although it was much more stable when the camera wasn’t simultaneously recording video.

There’s a handy passthrough mode on the Cockpitglasses that lets you swap to your smartphone’s front-facing camera, so you can see what’s in front of you; useful as head-mounted displays can leave you feeling isolated from the world.

The Parrot Disco is a whole different kind of experience to flying a more traditional quadcopter. It’s great fun flying through the sky, yet it always feels under your control. You’re going to need a lot more space than a quadcopter, though, and there’s no object detection so you’ll need to be more careful, too. It feels potentially a little less practical than other drones.

If you’re looking for a more exhilarating flying experience, it’s a great alternative to either the DJI Mavic Pro or GoPro Karma, but both of those will offer a far superior video experience not only for their flight but also onboard cameras.

The Parrot Disco FPV, including the Skycontroller 2 remote control and Cockpitglasses, is available now for £1,149.99. Keep checking back for a full review of the Parrot Disco once we can get one in to really put it through its paces.