GoPro Karma vs DJI Mavic Pro: Which of these portable drones comes out on top? Find out from our in-depth comparison.

Drones are yet to fully cross over into the mainstream, but GoPro and DJI have both helped push things in that direction with their latest offerings.

GoPro’s Karma and DJI’s Mavic Pro are both compact, portable drones, but while the latter has a built-in camera, the former is designed to work with several GoPro cameras.

It seems the battle is on for the best portable camera drone, then, but which of these two is looking like the best offering at this early stage? Read on to find out.

Both of these machines are portable, but how portable are they? Well, DJI seems to have the edge in this department. Both the Mavic and Karma use a folding design to make them easy to carry around, but the former is lighter and folds into a more compact shape. DJI says the drone “folds down as small as a bottle of water”, and it should fit into a purse or a belt holster.

The Karma is still a very portable device, but once folded it won’t reach “water bottle” levels of portability. It will however, fit into a backpack, making it much smaller and lighter than most drones.

When it comes to the Karma, GoPro says the drone “should be an end-to-end life capture solution”, which sounds pretty grandiose but essentially means you’re getting an adaptable device that comes with a range of features.

What are those features? Well, there’s the Stabiliser which should make for some impressively smooth footage, comes with a 90-degree range of motion and moves on three axes. DJI is also bringing a 3-axis stabilisation system to the table with its drone offering.

Next up: flight specs. The Karma will top out at 35mph and has a maximum range of 1km. It’s also capable of flying at an altitude of 4,500m. The Mavic Pro, on the other hand, has the edge on the Karma in this respect, as it can hit 40mph and can travel up to a rather impressive 7km before it loses transmission. That’s 6km further than the GoPro.

Related: GoPro Karma – Your guide to the first GoPro drone 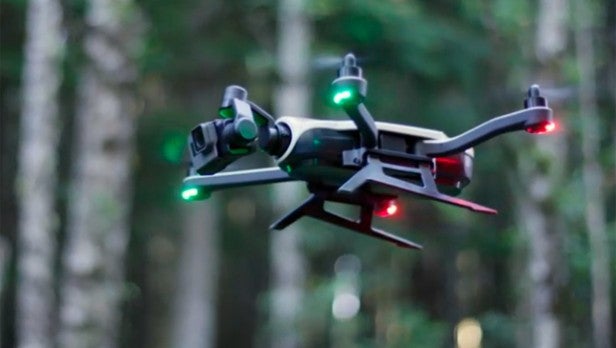 When it comes to flight time, the Karma will stay airborne for 20 minutes, which isn’t all that great in the grand scheme of things. And, once again, the Mavic has it beat, although only very slightly, with a max flight time of 21 minutes. It can, however, last up to 27 minutes according to DJI. Of course, you can bring extra batteries along for both of these drones, which looks like it’s going to be a necessity given the paltry flying times.

Elsewhere, the Karma features some safety features such as built-in no-fly zones and a return-to-home button. One feature it doesn’t come with, however, is obstacle detection – something which DJI has included on the Mavic Pro. 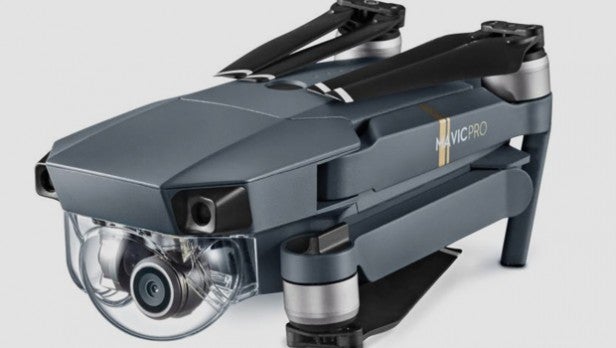 That means you’re far less likely to see your beloved drone smash into anything thanks to the obstacle avoidance sensors built into the Mavic. The machine comes with a front-facing collision-avoidance system capable of spotting obstacles up to 15m (49ft) away when travelling below 36km/h (22mph).

What’s more, DJI’s drone is capable of following you around, hovering above your position as you move and capturing your exploits. GoPro’s offering, on the other hand, has no such feature.

Perhaps the most important feature is the camera that’s going to be capturing all those gorgeous, sweeping aerial shots. So what are these two drones packing in this department?

Firstly, let’s deal with the Mavic Pro. DJI’s machine comes with a built-in camera that can shoot footage in 4K at up to 30fps and 1080p resolution at 96fps. It’s also capable of snapping 12-megapixel stills. The minimum focusing distance is 0.5m and the sensor itself is a 1/2.3-inch unit. Those are some pretty impressive specs that match DJI’s Phantom 4 drone. 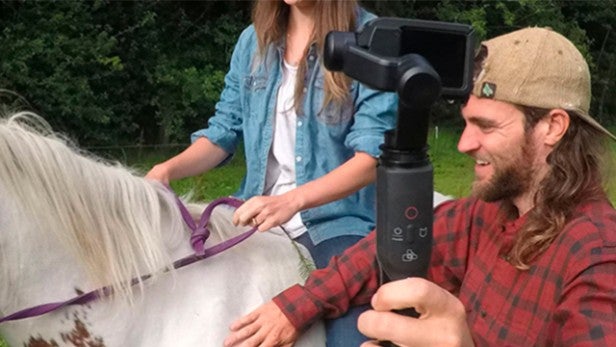 So what’s the deal with the Karma? Naturally, GoPro has opted to make its drone compatible with its latest action cam, the Hero 5 Black. But the Karma’s Stabiliser, which holds the camera, will also work with the more affordable Hero 5 Session and even the 5’s predecessor – the Hero 4 Black and Silver.

If you’re using the latest Hero 5 Black, you can expect to get similar specs to the Mavic Pro. That’s 4K footage at 30fps, 1080p footage at 120fps – a higher frame rate than the Mavic’s 96 – and 12-megapixel stills. The camera also comes with a built-in touchscreen, voice control, and GPS, although the latter is the only one you’re likely to be using when it’s attached to the drone. 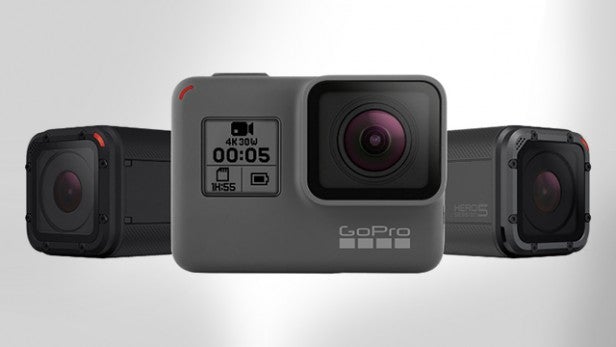 Making the camera detachable in this way has several benefits, and chief among these is the attachment mechanism itself, which comes in the form of the Karma Grip.

The grip comes with the drone, and features a professional-quality stabiliser that should make for fluid footage. But most impressive is the fact that the grip can be removed from the drone and used as a grip to shoot freehand – with the added stabilisation feature – or mounted on other gear such as the Karma Case or Seeker sportpack. It’s also got built-in controls so you can operate the attached camera without having to touch it. 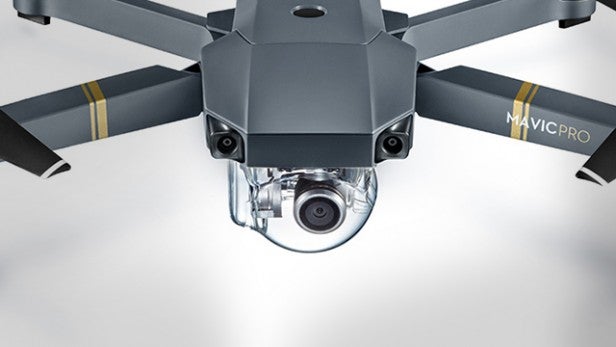 The Mavic’s camera is obviously not capable of any of this, giving GoPro the edge when it comes to camera functionality and overall customisation. However, the Mavic does allow you to take selfies using gestures, so if you’re the selfie-taking type you might find DJI’s drone more tempting.

So how do you control these beasts? Well, the Karma comes with its own controller, which looks a tad outdated if you ask us. It takes the form of a clamshell-style remote control with a 5-inch touchscreen that shows real-time views from the drone’s camera in 720p resolution. 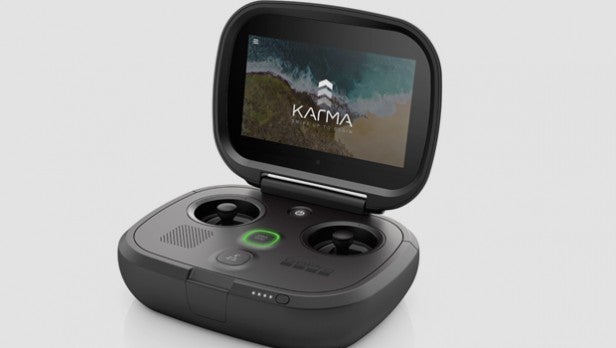 DJI has opted to provide you with a controller of its own, to which you attach your phone in order to see what’s being filmed. You can also control the Mavic using just your smartphone if you want.

GoPro has announced the GoPro Passenger app, which lets others view and control the GoPro camera while you fly the drone. However, it doesn’t look like you’ll be able to actually control the Karma drone with a phone app. 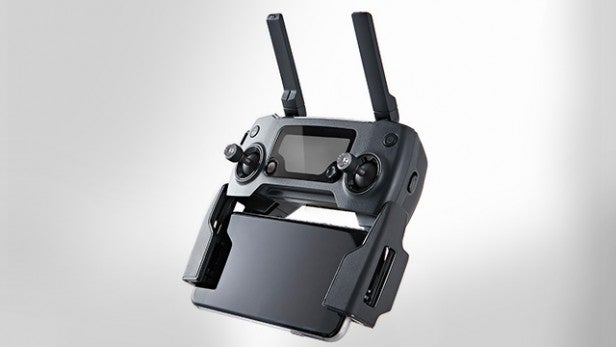 DJI also has another trick up its sleeve. It’s offering a pair of goggles that look much like a VR headset and allow you to see what the drone’s camera sees. When wearing the goggles, your head movements will control the drone’s movements, which may or may not land you in a spot of legal trouble when it comes to laws that require you to keep the drone within sight, etc.

The Karma will be available for £719.99 from October 23, which, when compared to the Mavic’s £999 price tag, seems like a great deal. However, that £719.99 doesn’t include the camera, which you’ll have to buy separately.

If you go for the new GoPro Hero5 Black, you’re looking at adding an extra £349.99 to the price, making the overall cost of a Karma drone setup £1,069.98. You can, of course, opt for the slightly less capable Hero5 Session, which brings the price down by £100, or the Hero 4 Black or Silver, which are going for between £259 and £329 on Amazon right now, making the cost a lot more even between these two drones.

At this point we’re yet to test out both drones, so it’s impossible to call a clear winner. Even without getting hands-on time with them, though, we can tell this is going to be a close one.

The cameras are pretty much the same in specs, assuming you opt for the Hero 5 Black to go with the Karma. However, GoPro has the added benefit of more customisation with its detachable camera and grip system – giving you the chance to shoot your own handheld footage, as well as using the drone to get aerial shots.

However, the Mavic Pro is more portable, has extra flying features thanks to its built-in sensors which allow for obstacle avoidance, and is cheaper than the GoPro if you compare it to the full Hero5 Black setup on the Karma.

It depends what you’re looking for, then, but we can’t help but wish the best features of both could be combined somehow. As it stands, it’s just frustrating to have so many great features spread across two expensive machines.

We’ll have more once we’ve given both a try.