What is the Parrot Bebop 2 Power FPV?

The Parrot Bebop 2 Power can be considered more of a revision than a sequel to the original Bebop 2. It now comes in a two-tone black colour for a slightly more aggressive look and offers improved flight time, allowing for up to 30 minutes from a single charge.

There are two batteries included – meaning up to an hour up in the air – as well as the improved Cockpitglasses 2 FPV goggles and a remote control.

Flight has been upgraded with a number of automated modes for more cinematic shots and easy piloting. All the above is available for a very competitive £629, which makes the Parrot Bebop 2 Power FPV an enticing package overall.

Visually, aside from that new Bruce Wayne-appealing black paint job, not a great deal has changed from the Bebop 2. The rear LED light that provides status indications – and that makes it slightly easier to identify the rear when up in the sky – is now blue; it was red on the previous model. Otherwise, both models are identical. 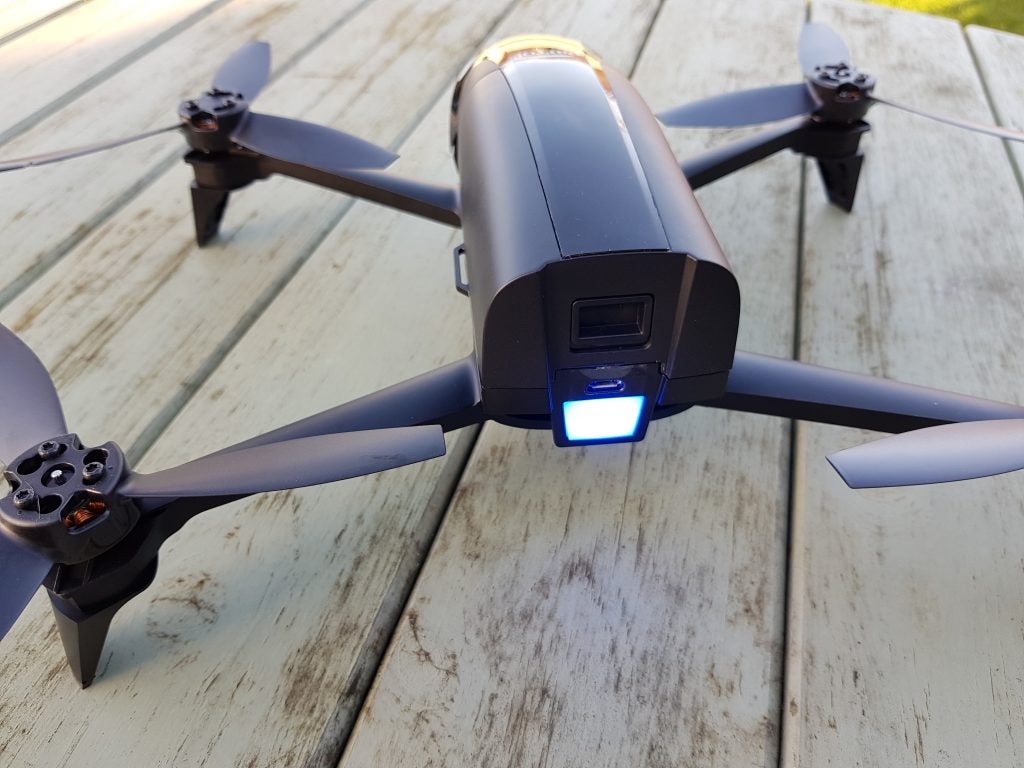 Sizewise, the Bebop 2 Power remains small, but not as diminutive as the DJI Spark – and certainly not as small as the folding DJI Mavic Pro. While Parrot has been generous to include the FPV goggles and remote controller accessories, a storage case would have been super-handy since there’s no means to easily transport the Bebop 2 Power safely. It isn’t something you can just throw into a bag haphazardly.

The drone has a standard quadcopter design and is surprisingly light at just 550g. That’s owing to some of the build materials, which consist of lightweight plastic and a polystyrene-like material towards the front. Compared to a drone such as the DJI Spark, the Bebop 2 Power doesn’t feel as robust, with the model showing some flex in parts on the exertion of some force. 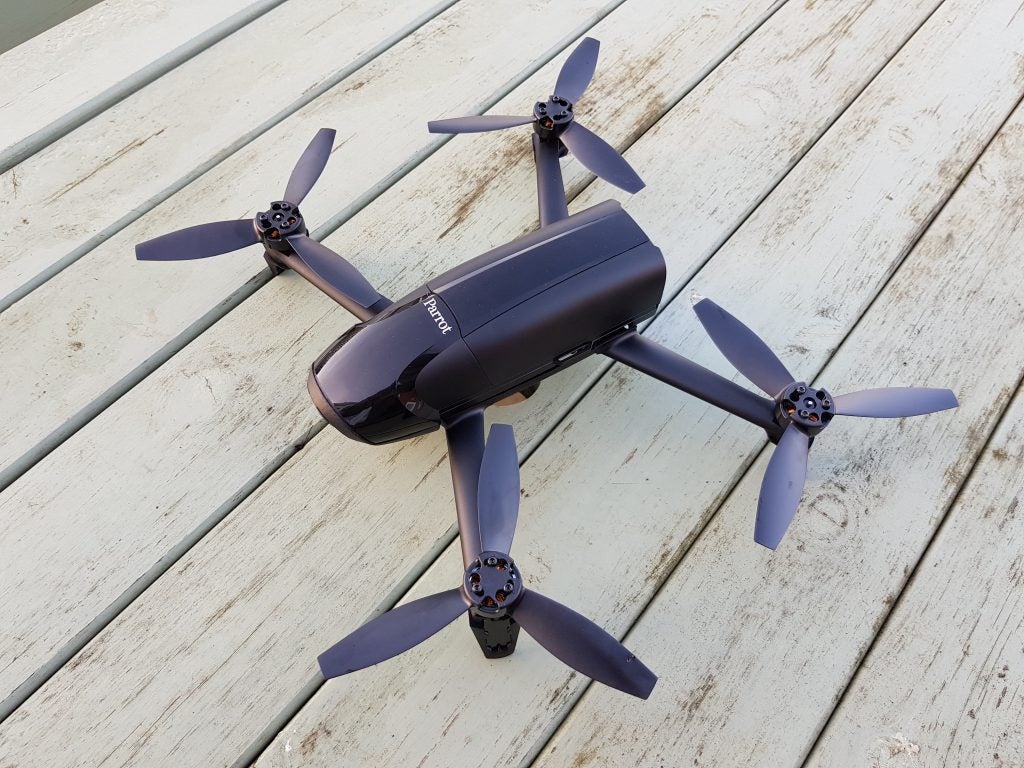 I didn’t actually crash the Bebop 2 Power during testing, so can’t accurately attest to its resilience. There aren’t any prop guards, so those do feel slightly vulnerable, but you do at least get a spare set included.

The Cockpitglasses 2 have a newly improved design that collapses down to make them easier to transport. It still uses your smartphone for a first person view.

Then there’s the Skycontroller 2 remote control, which makes for much easier piloting than virtual sticks on your phone. It’s a little top-heavy for my liking, due to the large transmitter and receiver that gives it a range of up to 2km. I’d have liked a little more weight in the controller to help counter-balance that; but otherwise it’s a generally ergonomic controller, not dissimilar to an Xbox controller. 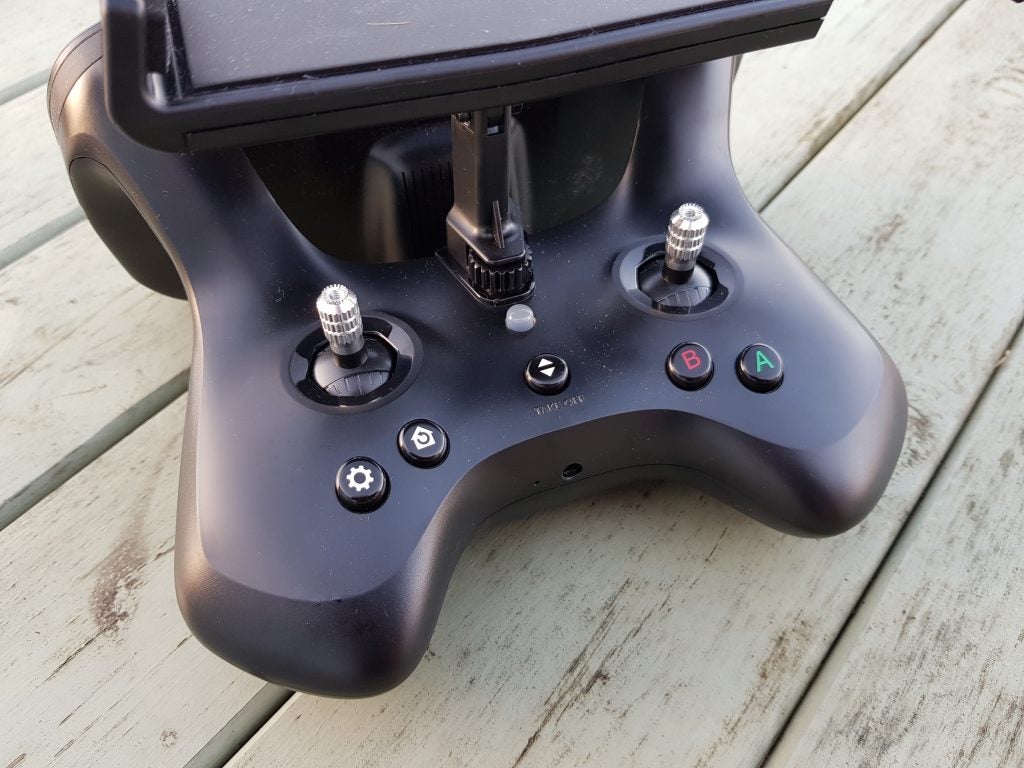 Setting up the Bebop 2 Power requires you to first make sure everything is charged up. A wall adaptor is included with a cable for charging the batteries, and another for charging the Skycontroller 2. With those topping up, you need to attach the propellers; there’s a handy tool included for locking them in place. The propellers are colour-coded, as you need to match them correctly. 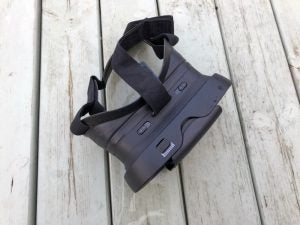 Finally, download the Parrot FreeFlight Pro app and connect it to the controller over a USB cable. You’ll need to used your own – it isn’t included – so be sure to have one handy. Your phone or tablet can then be held in place with a stand that screws into the centre of the controller. A heavier tablet will help tackle the unbalanced weight of the controller I mentioned earlier.

You can also slide your phone into the FPV goggles. In terms of visuals, your experience is likely to be dependent on the phone you use. I was using a Samsung Galaxy Note 8, which has a high-resolution screen – but the video feed from the app is actually only 720p. It’s definitely a more immersive experience, but you do feel a little isolated from the outside world.

The Bebop 2 Power has all of the sensors you’d expect at this price. There’s GPS and GLONASS positioning, ultrasound on the base with visual positioning, and an altimeter. All of these work together for return-to-home functionality, which you can either trigger manually or it will kick in automatically if you lose connection. 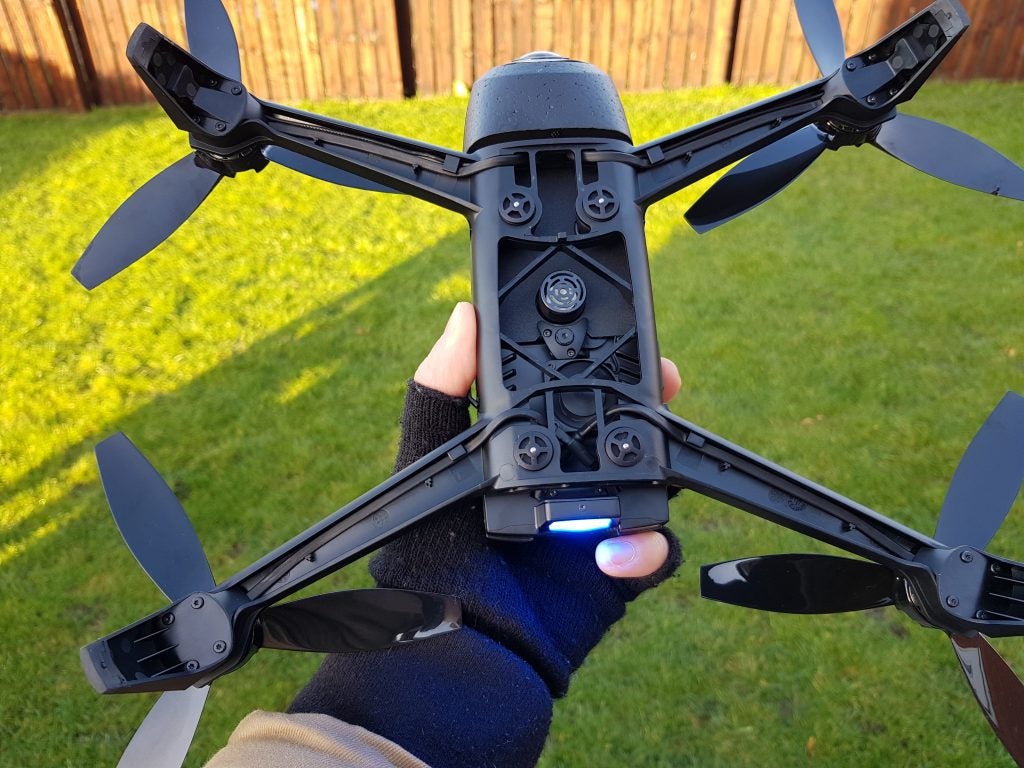 While the DJI Spark has a microSD slot for storage, the Bebop 2 Power instead opts for 8GB of integrated flash storage, of which about 7GB is actually usable. I’d have preferred a microSD slot, not only for the greater storage capacity but also because it makes getting content off the drone much easier.

With the Bebop 2 Power you have to either use the app, which means slightly slow transfers over Wi-Fi direct, or connecting the drone to a computer over micro-USB.

As for the camera, it has a 14-megapixel sensor that can capture JPG or DNG RAW still images. This is alongside 30fps Full HD video. There’s only 3-axis digital stabilisation, though, rather than the preferable 2-axis stabilisation of the DJI Spark (a third is digitally stabilised).

While the Bebop 2 Power might be lightweight, it’s one of the more stable drones I’ve flown. Even on a slightly blustery winter’s day, where it had been snowing and sleeting earlier, it held its own up in the air and was able to hover in place while countering the wind. Supposedly, it’s able to withstand gusts of up to 60km/h.

There are two flight modes available in the app: video and sport. The first is the most stable, limiting the flight and rotation speeds and enabling the flight assistance in the interest of avoiding nausea-inducing video. The latter disables much of the assistance and unlocks the drone’s full speed of 65km/h. 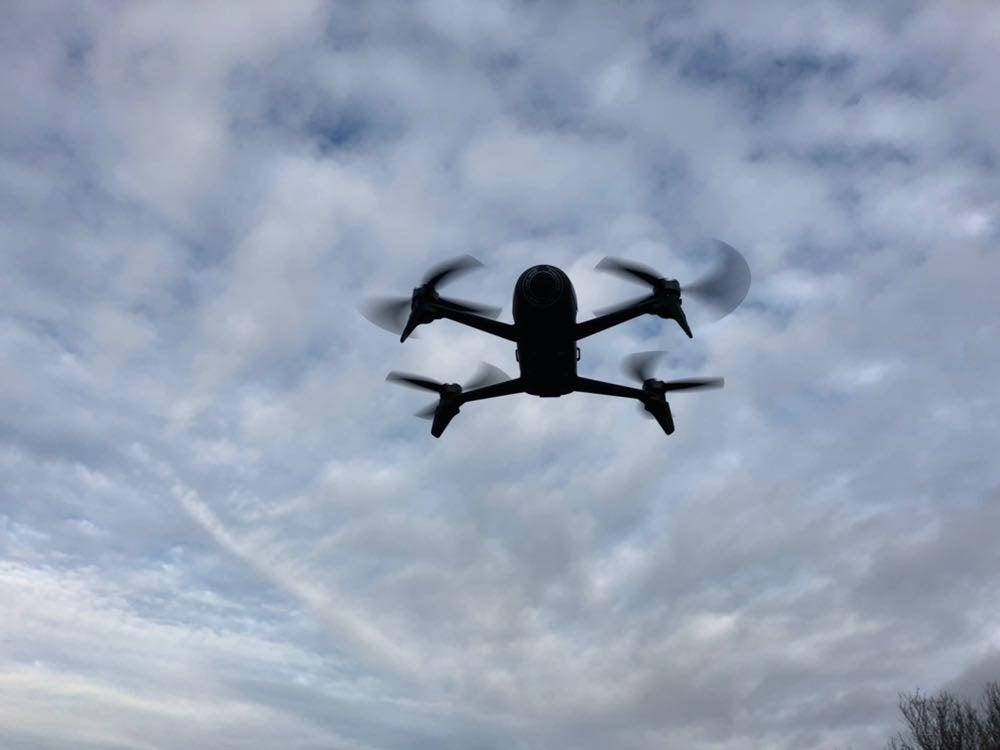 It’s a big difference, too, so it’s worth trying out in a large open space, only after you’re a little more comfortable handling the drone. The Bebop 2 Power is seriously nippy when it wants to be and it makes the FPV mode even more exhilarating.

An interesting observation from my time testing: the drone seems to go into sport mode when you use the return-to-home function. It means that if you’re used to the leisurely pace of the video mode, the drone suddenly comes in hot on its way back and gives you a rather fun startle.

The Bebop 2 Power also supports a Follow mode, which you need to activate in the app. It’s normally an in-app purchase on other models, but the Power comes with a voucher in the box. It seems a bit miserly to have in-app purchases for functions for other models that can still cost a lot of money. There are also automated cinematic shots that make it easy to capture sweeping, dramatic landscape shots. 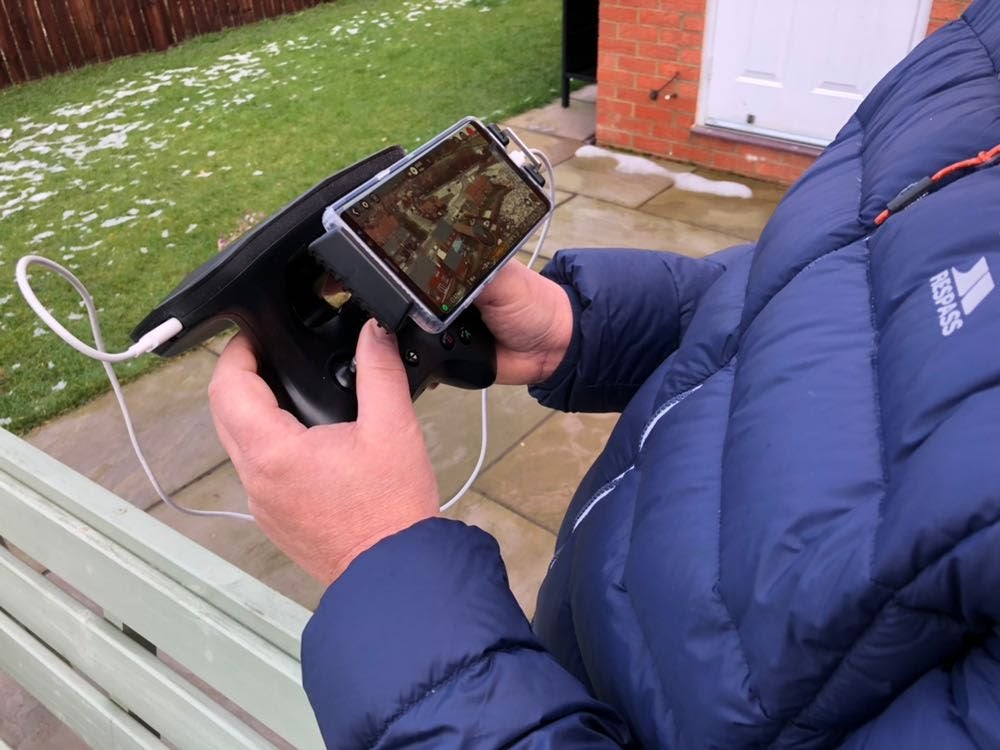 Similarly, taking a leaf out of the DJI Spark’s piloting book, there are Magic Dronies. These use the visual recognition and GPS positioning of your smartphone to shoot dramatic ‘dronie’ videos, with pre-programmed camera movements such as ‘Orbit’, ‘Tornado’, ‘Parabola’ and ‘Boomerang’. There’s also a touch and fly mode for easy piloting.

A special nod should go to the FreeFlight Pro app, which makes piloting a breeze. It displays useful data intelligently placed around the screen, such as the altitude and distance of the drone from your position. A radar shows both the direction you’re facing and that of the drone, which helps you to keep  your bearings – not so easy to do when the drone is a distance away.

Unfortunately, the one area that the Bebop 2 Power is found lacking is image quality. Video isn’t as sharp as that of rivals such as the DJI Spark, with colours looking more subdued. The digital stabilisation does at least do an excellent job of keeping footage rock-steady. However, still images are also a little disappointing, lacking detail and vibrant colours. Barrel distortion from the wide angle lens is evident, too, at times. You’ll need to adjust the exposure using the shoulder scroll wheel on the controller and this basic adjustment makes it difficult to correctly expose for the entire scene at times.

You can see some example images and video below: 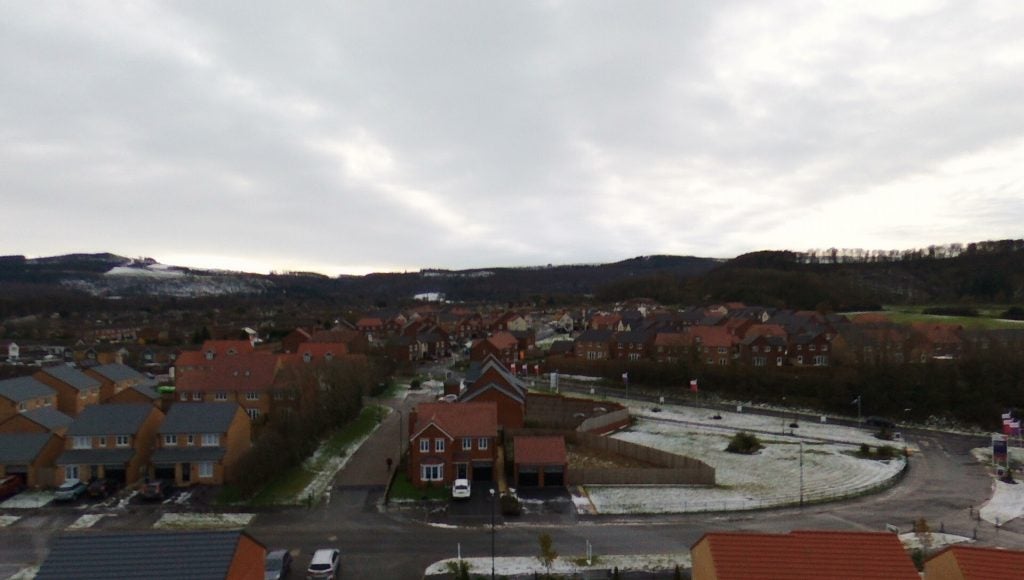 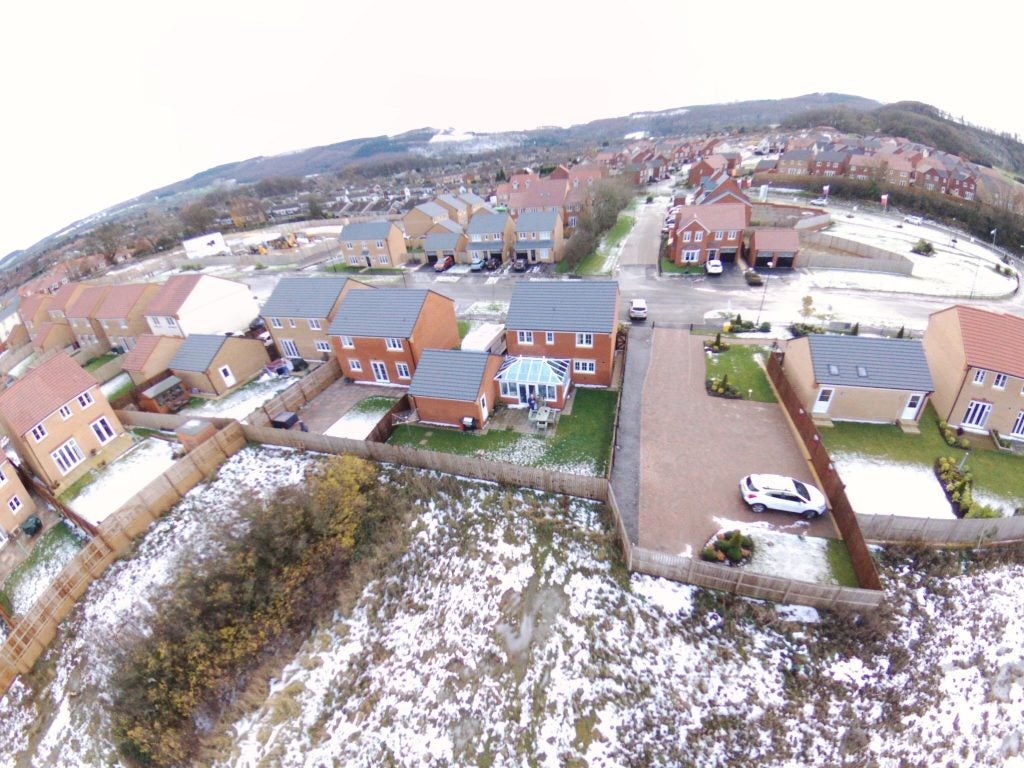 Saying that the Bebop 2 Power offers an hour of flight might be a little disingenuous considering you’ll need to swap out batteries to achieve this time. Nevertheless, up to 30 minutes of flight on a single battery is still an impressive feat. That’s more than double offered by the DJI Spark. It’s a pretty accurate measurement, too, considering that’s 30 minutes measured in ideal flying conditions in video mode.

The app lets you view the length of flights, alongside a visual map in the flight history, and I was certainly seeing very close to 30 minutes from each battery. Charging a battery takes about 80 minutes. In my experience, the Skycontroller 2 battery will last over 4 hours; a combined 2 hours of flight time had taken it down to just over 50% battery. Note that the Skycontroller 2 charges your phone’s battery (albeit very slowly) when it’s plugged in, too.

Why buy the Parrot Bebop 2 Power?

The Parrot Bebop 2 Power is undoubtedly a good-value bundle considering everything you get for £629. The DJI Spark Fly More bundle, which includes extra accessories, will set you back £699.

The Bebop 2 Power is great fun to fly, offers excellent battery life and lots of useful automated functions that let you concentrate on capturing video or images. However, the actual image quality lets it down slightly. Between the Bebop 2 Power and DJI Spark, the Parrot drone is the more fun to fly, whereas the DJI Spark captures the better footage.

The Bebop 2 Power is a fun, easy-to-fly drone – but its image quality is a little lacking.