The headline TVs on show at the recent Panasonic Convention in Frankfurt were undoubtedly the brand’s previously unseen flagship curved 4K TVs, the CR850 series. But for many regular folk – people without bottomless bank accounts – the most intriguing TV Panasonic unveiled was actually the mid-range CX700 series. We took a look at the 55-inch TX-55CX700.

The 55CX700 is startlingly well featured, given its mid-range positioning. The least surprising of these features is its native 4K UHD resolution; after all, 4K’s now to be found even at the bottom of many TV brands’ ranges. Much more surprising, though, is the amount of other picture quality technology included.

For starters, the CX700 range marks the entry point for Panasonic’s new Super Bright panels. These use a new ultra-transmissive panel structure to deliver more brightness while consuming less power. The CX700s don’t feature HDR (high dynamic range) compatibility, but in our experience this extra brightness can be of benefit to normal, non-HDR content.

SEE ALSO: What is HDR TV? 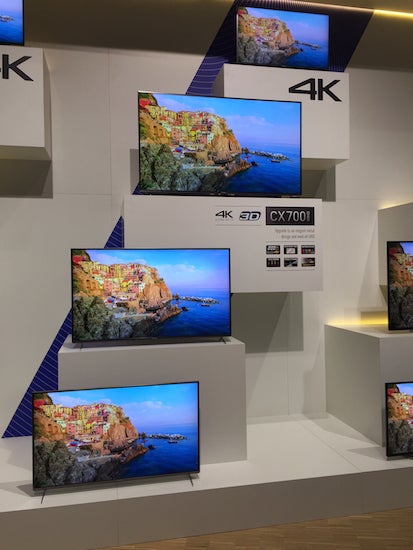 Also potentially significant is the 55CX700’s motion processing, which combines with the set’s backlighting to deliver an 800Hz effect. This is a huge step up from the 200Hz offered by the next TV series down in Panasonic’s range, the CX680s. Motion clarity is especially important when you’re talking about 4K UHD, so this could be a great reason in itself to step up from the CX680s to the CX700s.

Another eye-catching feature on the 55CX700’s spec sheet is its use of direct LED lighting driven by a local dimming array, which should help it keep better control of all that extra luminance being delivered by the Super Bright Panel design. (Note that the 50-inch and 40-inch models in the CX700 range use edge LED lighting instead.)

The 55CX700’s Smart TV features come courtesy of Panasonic’s new Firefox OS-based My Home Screen 2.0, along with the built-in Freeview Play system announced at the convention. Due to launch in the spring, Freeview Play will offer a new combination of catch-up TV, on-demand and live TV services – all free of any subscription charges – in a friendly new interface that Panasonic assures us will complement rather than complicate the new Firefox OS system. 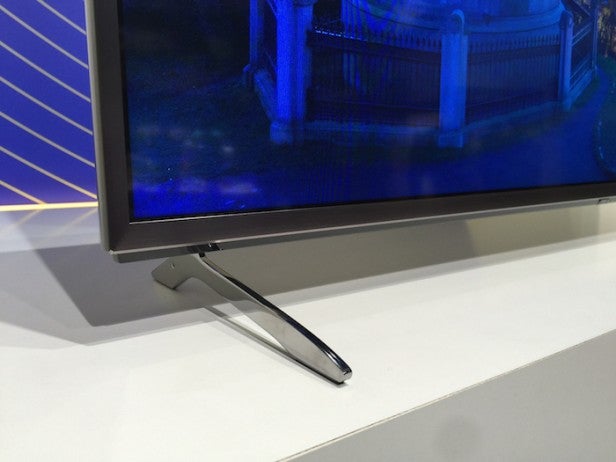 The more we saw of the 55CX700 at the convention, the more convinced we became that this model – which will be available exclusively through Dixons – could be Panasonic’s biggest hit of the 2015 TV season.

For starters it looks lovely. Its gun-metal grey bodywork looks and feels more premium than that of the step-down models, getting the maximum impact from what small amount of bezel there is around the screen. The star attraction, though, is the little desktop feet the screen rests on, which are so thin they look like they’ve come off the bottom of a pair of ice skates. From the front it looks almost as if the 55CX700’s screen is hanging in thin air.

The quality with which the 55CX700 reproduced its demo reel of 4K content was another reason the set caught our eye at the convention. For instance, its contrast range looked outstanding. Impressively deep but also natural-looking blacks were able to sit side by side with bold colours and bright whites that still enjoyed plenty of pop, despite the stark lighting of the convention floor. From what we’re seeing so far Panasonic’s decision not to release any 2015 TVs in the UK that use IPS-type LCD technology could be a masterstroke.

Crucially the extra brightness apparent from the 55CX700 hasn’t apparently lead to colours that look bleached and washed out. On the contrary, the 55CX700’s tones look noticeably richer and punchier than those of the CX680 range sat next door on the convention stand. 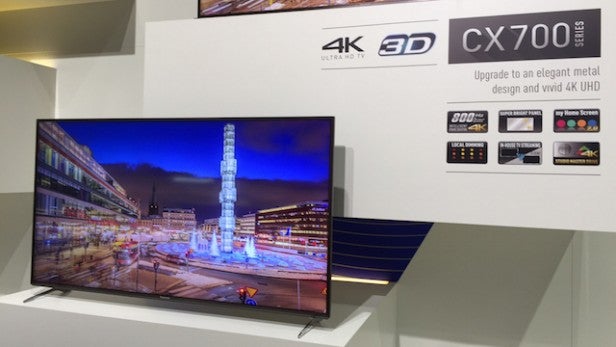 Detail levels with the native 4K content being shown look gorgeous too, with Panasonic’s ever-dependable processing ensuring that motion doesn’t cause a significant drop in clarity and that there’s plenty of colour processing on hand to ensure subtle colour delineation.

The picture doesn’t look overly processed, though. On the contrary, we were struck by how natural pictures feel, and how directly we connected with them considering the artificiality of the environment we were watching it in.

The 55CX700’s combination of extreme contrast, rich colours and effortless clarity additionally help it produce even more of that extra sense of depth we’ve come to expect from high-quality 4K UHD footage.

While we’ll clearly need to assess the 55CX700 in much more controlled conditions with more varied content before we can recommend it, we struggled to find anything really negative to say about it. There was perhaps some gentle ringing interference around small objects in the picture…

Look out for a full review as soon as we can get our hands on one.