What is the Panasonic Toughpad FZ-G1?

A friend of TrustedReviews once dropped his brand new 64GB iPad 4, just 3 days into owning it. The screen shattered and cracked in a way that indicated at least seven years of bad luck, which started the next day when Apple declared it unfixable and sold him a new one. Had he been using a Panasonic Toughpad FZ-G1, this might not have happened – although the initial outlay would have been more than the cost of the iPad and its replacement combined.

The Toughbook FZ-G1 is a Windows 8 Pro tablet intended for extreme conditions: high and low temperatures, dusty and damp environments, as well as high drops. It’s an outdoor work device first and foremost, and the added ruggedness comes with a hefty price-tag of £1,800. 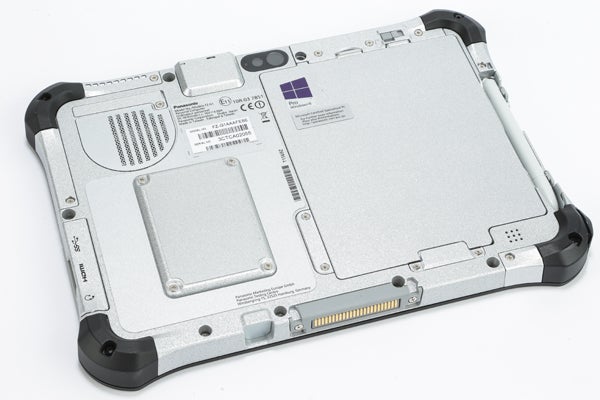 The Panasonic Toughbook FZ-G1 isn’t going to win any beauty contests, but then it’s not interested in entering them either. Its 10.1-inch screen is surrounded by a thick silver bezel, which in turn is wrapped up in a thinner, rubbery edge to add grip and absorb impacts when dropped. The screen is set slightly within the frame to protect it, too.

It feels a million miles away from the sleek curves of other tablets, but does at least feel satisfyingly bulky. It’s heavy for a tablet, weighing in at 1.1kg, but because of its thick appearance, this somehow feels lighter than it looks. At 0.8 of an inch thick, it feels more laptop than tablet, so it’s a pleasant surprise that despite its girth it clocks in at only marginally heavier than an 11-inch Macbook Air.

While Apple, Samsung and the like do their best to hide the ugly mechanics with smooth aesthetics, Panasonic seems to wear its nuts and bolts like an industrial badge of honour. We counted 27 exposed screws on the shiny, metallic backplate alone.

Deviating from common design again is the addition of waterproof face buttons. While the iPad and Android devices keep most functions on the screen, the Toughbook FZ-G1 has seven circular buttons lined up below it. From left to right, with their default functions: A1 (Panasonic dashboard); A2 (Touch keyboard); Volume Down; Volume Up; Windows Start; Screen Rotate On/Off and Power On. 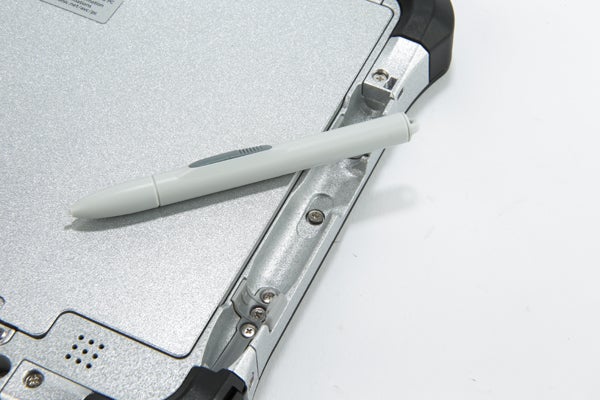 Considering its price and heavy-duty image, the Toughpad’s connectivity seems a bit on the limited side to us. There are 3 stiff flaps around the side, one of which lifts to reveal the AC adapter plug, while another conceals an HDMI port, a headphone jack and a single USB slot. The final flap reveals an Ethernet port, which is something of a rarity on tablets but a necessity for an engineer for won’t always have the luxury of Wi-Fi to connect to.

Indeed, Panasonic says the Ethernet port is an optional extra, and the slot could alternatively be fitted with an extra USB slot, a microSD port or a serial port – the latter being another legacy port that some engineers need to use specialist equipment The FZ-G1 can also be customised to include 3G or 4G.