As you’d hope, beyond its rugged credentials, Panasonic has managed to pack a fair bit of punch. The FZ-G1 has a 1.9GHz Intel Core i5 processor (with Turbo Boost up to 2.9GHz), 4GB RAM (optional upgrade to 8GB) and a 128GB SSD for storage. This combines to make navigating Windows 8 a flawlessly smooth dream, and boot up times are mere seconds in length as well. It scored a very decent 4,715 in PC Mark 7, making it as fast as the Microsoft Surface Pro.

While the thick casing means you don’t feel the heat of it when it’s going full pelt, you can certainly hear it. The fan, and air-vents, located on the top and back of the unit will use any excuse to kick into life, and while you won’t notice it out on the road, as soon as you’re alone in a room with it, it’s hard to ignore. 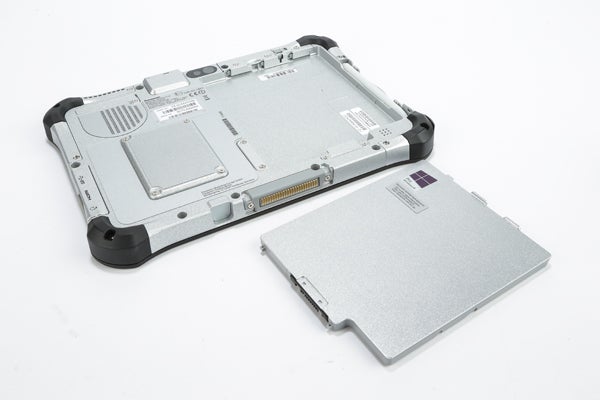 Panasonic suggests you’ll get a decent eight hours from the FZ-G1, but we found that to be a touch on the optimistic side, getting seven hours and four minutes from our battery drain test. Not too bad, but a little disappointing considering its bulk, and its rather chunky charger..

On the plus side, the battery does seem to refill pretty quickly. A quick 30-minute charge gave the FZ-G1 40% of its battery bar back, which is enough for between two and half to three hours of user. It’s worth noting, too, that Panasonic sells long life batteries and car chargers to ensure it doesn’t give up the ghost at the worst possible time. 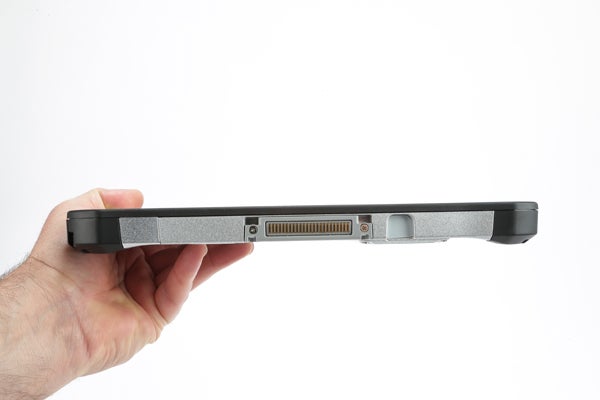 This covers the day-to-day stuff, but the Toughpad’s main feature is its ruggedness, so we went about putting it through its paces. First up, some dropping tests. The accompanying documentation assured us that the Toughpad FX-G1 could cope with drops of at least four feet, so we duly measured and went about the challenge. Four foot on most people will be somewhere between chest and slightly above waist height, so respectable, though not ideal for anyone studying the screen more closely.

In any case, we dropped the FZ-G1 from a number of angles, so it hit the ground screen first, back first and side first. Each time, despite the nerve-wracking noise of 1kg of expensive electronics taking on gravity, the Toughpad held strong: none the worse for wear, aside from the USB cover popping open.

Then we wanted to test its all-weather form. Upon hearing rain, we rushed outside clutching our Toughpad and stylus, ready to see if a little water would dampen its performance. For the most part it performed admirably, with all the flaps covering the sensitive innards, it cheerily continued working. Of course, with a touch screen interface, it wasn’t long before the water on the screen made it miss keystrokes, as well as adding a couple of phantom ones we didn’t make. Switching to the stylus seemed to improve this a little, though. 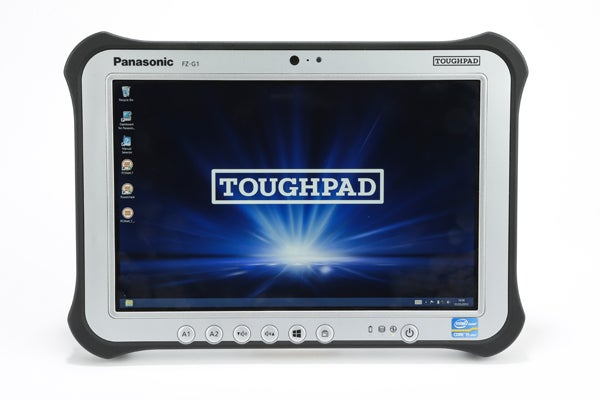 The performance is solid, it lives up to its reputation of being tough and rugged, but the price will put it out of the reach of smaller business and individuals. On the other hand, if you need a tablet that you can be sure won’t let you down  in tough workplaces, then it’s hard to fault the FZ-G1. You can at least guarantee that the price-tag offers a product that won’t give out at the first sign of trouble. In the world of tablet computing, the Panasonic FZ-G1 is a rare win for substance over style.