MacBook Air 2012 Intro
The MacBook Air remains an iconic product in the laptop market. Not because it was the first premium ultraportable to be thin enough to fit in an envelope – Sony did that years earlier with its VAIO TZ1, among many other models – but because it achieved a higher level of market penetration and public awareness than others.

– Looking for the best MacBook Air rival? Have a read of our: MacBook Air Versus Samsung Series 9 showdown.

Even till early last year, the 2011 MacBook Air was one of the best ultraportables around, until the Samsung 900X3B came along and stole its crown. However, now Apple has upgraded its entire laptop range, so we’re testing the 13 inch MacBook Air 2012 to see how the new and improved model holds up. 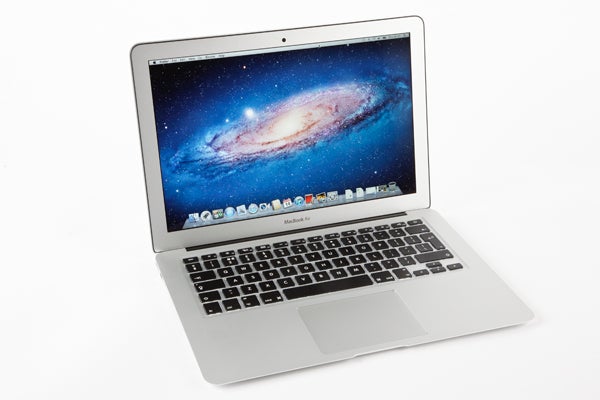 Let’s start things off with a quick summary: the new MacBook Air is a relatively minor upgrade from its predecessor, especially when compared to the stunning overhaul that is the MacBook Pro with Retina Display. In stark contrast, the 2012 Air has the same chassis, layout and screen.

What’s new is that the internals have been upgraded to Ivy Bridge, which provides a modest CPU bump and a very noticeable GPU one. In other words, the new MacBook Air is better to game on, but of course the same goes for all its competitor Ultrabooks. Connectivity has also been given a major boost by the long-overdue addition of USB 3.0. 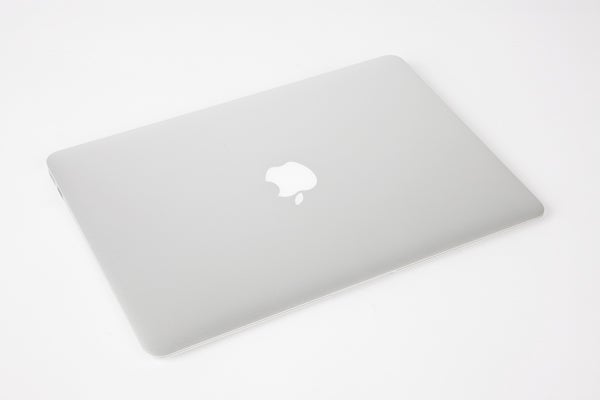 MacBook Air 2012 Design and Build
At first glance, you might be forgiven for thinking this is the same machine as its predecessor – Apple simply hasn’t fixed what wasn’t broken. The 2012 MacBook Air 13 inch is still a gorgeously minimalist unibody affair sheathed in anodised aluminium, that’s just 17mm thick and weighs a mere 1.35kg. If it wasn’t made by Apple, it would be called an Ultrabook.

The same angular lines, glossy black screen, matt black keyboard and huge silver touchpad are all present to greet you, while build quality is just as superb. In fact, the only way you can tell anything’s different from the outside is by looking at its connectivity, and specifically at the slightly more elongated MagSafe 2 connector (and no, your old MagSafe kit won’t fit unless you buy an adapter). 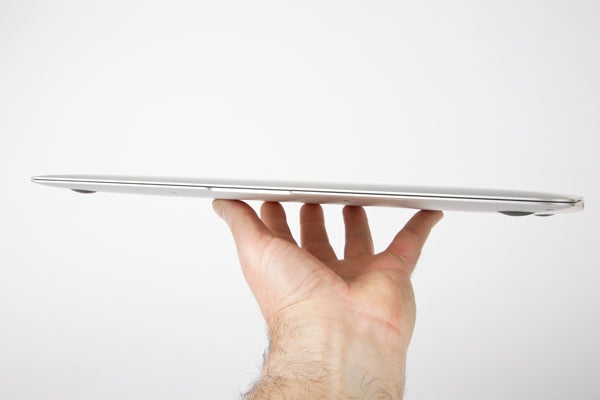 Aside from softening a few edges, there’s really not too much we wanted to see changed, so we’re not complaining. Of the non-Apple ultraportable crowd, only the Samsung 900X3B, Dell XPS 13 and, to a lesser extent, Asus Zenbook are playing in the same field when it comes to the combination of premium looks, sleek lines and superb build on offer.

MacBook Air 2012 Connectivity
Though it might look identical, connectivity has seen a very significant update. Even if they haven’t changed their appearance, the USB ports are now of the speedy 3.0 variety, finally letting you plug in the multitude of high-speed memory sticks and other external storage on the market. This is the one area where Apple’s machines were lagging most when compared with their Windows PC competition, and we’re glad to see it finally rectified. Oh, incidentally, those on their way to Hell may wish to consider purchasing a pair of ice-skates. 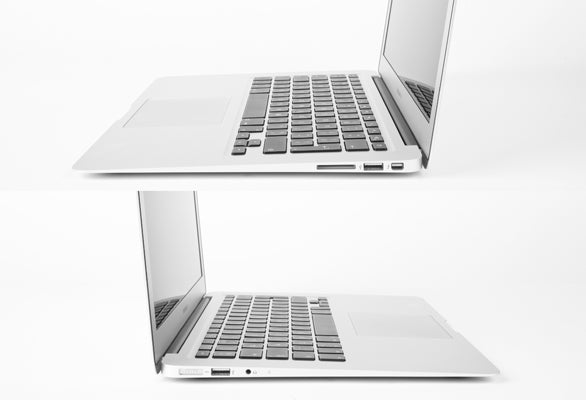 Twin USB 3.0 ports aside, there’s the same SDXC card reader and headphone jack. Of course the Thunderbolt/DisplayPort connector also remains in place, along with Bluetooth 4.0 and Wi-Fi N – all helping to make the 13in MacBook Air one of the best-connected ultraportables on the market. If it had a Gigabit Ethernet jack and maybe HDMI, it would be in pole position. As is, it joins the Sony VAIO Z at the front of the ranks.

MacBook Air 2012 Keyboard and Touchpad
Unsurprisingly, usability is eminently familiar. The MacBook Air 2012’s chiclet keyboard is well laid out even if keys are spaced just a tad too far apart for ideal comfort. Travel is good and there’s not a hint of flex, making it mostly a pleasure to type on; only the Lenovo IdeaPad U300 tops it by offering firmer action and ergonomic keys. Adjustable white LED backlighting is the cherry on the Apple-cake. 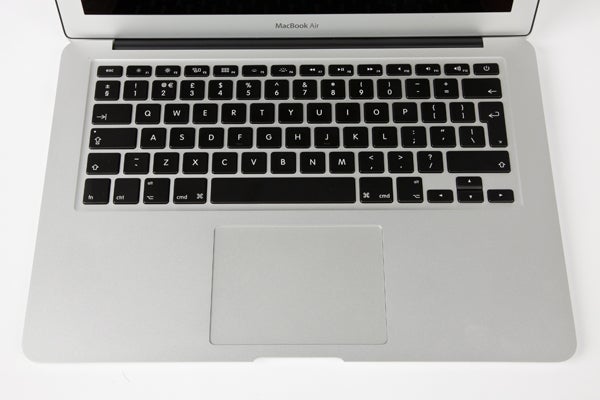 The massive frosted glass touchpad is still top notch, and though it’s been matched on some non-Apple laptops it has yet to be bettered. This is especially true since, unlike Windows 7, MacOS makes extensive use of its multi-touch capabilities in a way that’s intuitive and genuinely useful. Mind you, for just moving your pointer about this touchpad is easily matched by the likes of the Samsung 900X3B.

MacBook Air 2012 Screen
When it first came out, Apple was ahead of most 13in competitors with the Air’s screen resolution of 1,440 x 900. However, with the 13-inch MacBook Air 2012 we’re seeing more and more rivals offering 1,600 x 900 or even Full HD (1,920 x 1,080) at the same screen size. On top of that, while the panel Apple has used is certainly one of the better examples of TN, it’s still inferior to the IPS and PLS we’re beginning to see in premium laptops from other brands, such as the Samsung Series 9 900X3B and Asus Zenbook Prime. 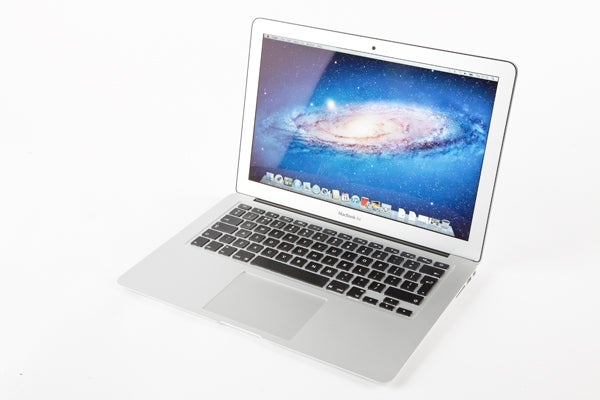 However, judged on its own merits the screen has good horizontal viewing angles and even looking from above can still get you an acceptable picture. Furthermore you get deep blacks, good dark detailing and rich colours. Our only major negative is reflections from the glossy finish, but these are not as bad as on a glass-fronted laptop.

What all this adds up to is that, while perfectly usable and in fact superior to the majority of slim and light laptops on the market, the 13-inch MacBook Air 2012’s screen simply doesn’t match up to some of the similarly priced premium competition, and the absence of the high resolution and IPS panel quality synonymous with the Retina branding seriously disappoints. 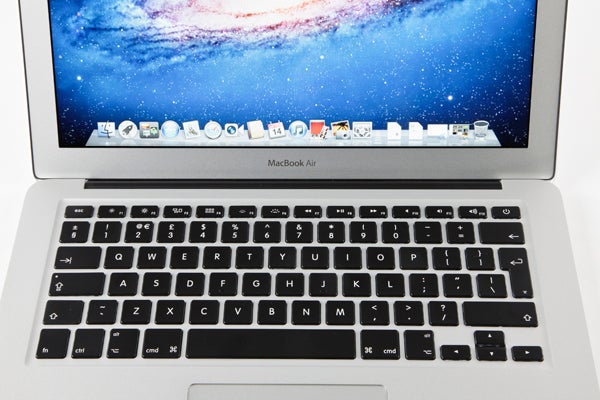 MacBook Air 2012 Speakers
The hidden stereo speakers are good by 13in ultraportable standards. They offer decent volume levels albeit with slight distortion at maximum. They also manage to project more depth and clarity than we’re used to from laptops this slim, though bass is inevitably absent. Certainly, the 13 inch MacBook Air 2012’s audio is on a level with the best of the rest.

Along with its connectivity, specifications is the other area where the 2012 MacBook Air has received a major update. The biggest news here is of course Intel’s Ivy Bridge, its third-gen processor and integrated graphics architecture. The Air comes with your choice of dual-core Core i5 or i7 CPUs. Our review sample sported the standard low-voltage dual-core Core i5-3427U, which runs at 1.8GHz but can Turbo clock up to 2.8GHz. This is similar to the kind of processing power you’ll find in most premium Ivy Bridge ultraportables. 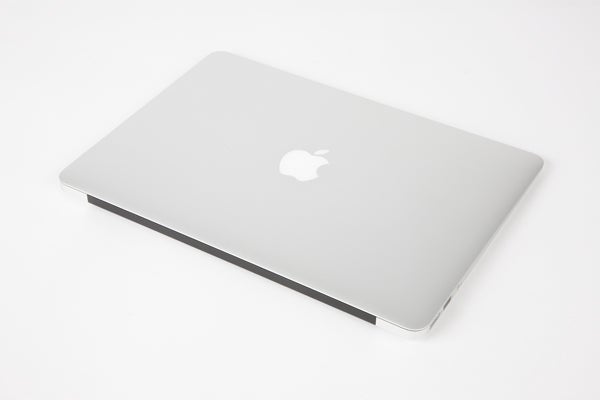 Graphics are handled by the HD 4000, which increases performance over Intel’s previous HD 3000 effort. Intel claims an improvement of up to 40 percent, and indeed we found results in Stalker to not be far off that, with a comfy 26.8fps average in the same 720p, Medium Detail test where last year’s Air only just managed 20fps.

While we wouldn’t go so far as to say it’s a gamer-worthy chip, at least a few demanding titles are now actually playable, even if you still have to make significant sacrifices in detail and resolution. 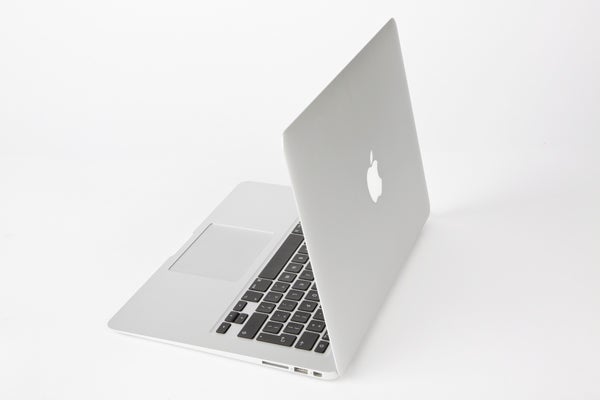 Pretty much every premium consumer laptop on the market comes with 4GB of RAM as standard; the one exception was the Air, which started you off with an anaemic 2GB of 1,333MHz DDR3. Thankfully, Apple has now upped that to 4GB and increased the 2012 MacBook Air 13 inch’s maximum to a generous 8GB of 1,600MHz RAM, which should be plenty for even the most demanding user. Better yet, the £80 it demands for the upgrade is actually somewhat reasonable. With many Ultrabooks only coming in one configuration and thus sporting a 4GB maximum, this can be a significant advantage for power users on the go. 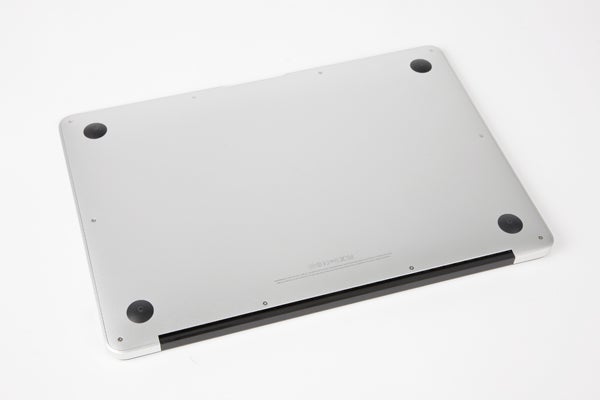 With a baseline 128GB SSD, minimum storage remains the same but the largest capacity choice has increased from 256GB to 512GB and the actual 6Gb/s drives used are faster than the 3GB/s ones used before. At time of writing there are very few other ultraportables available offering this much memory and solid state storage capacity, putting the 2012 Air at the top of its game – for now.

On a different note, it’s worth pointing out that the MacBook Air gets a tad noisy and hot around the hinge when running CPU/GPU-intensive content, but this is common with performance machines this thin.

Unfortunately, Apple claims the exact same 7-hour battery life figure for its new 13in Air as on the old model – despite the slightly more efficient processor and graphics chip. This is a shame as, in our light productivity test, the previous 13in MacBook Air only managed five hours 41 minutes – though admittedly this was running Windows 7, which will have had an impact. 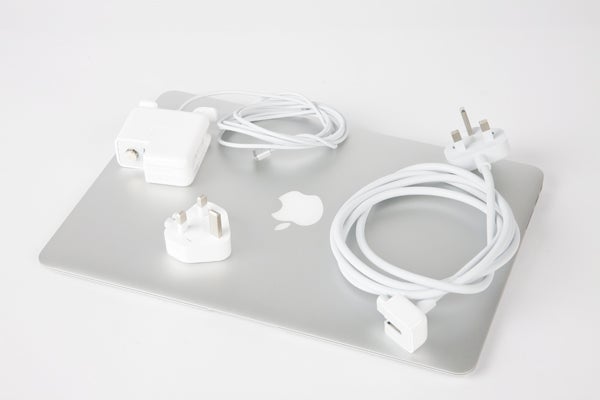 Bizarrely, we actually got a slightly lower score of five hours and 21 minutes this time around. Using the laptop with Apple’s OS as intended delivered closer to the claimed figure, but we would still say it’s the one other area where, together with its screen, the 2012 MacBook Air isn’t quite the king of the ring.

MacBook Air 2012 Value
With a starting price of £999, the new 2012 Macbook Air 13in is solidly positioned at the premium end of the market, but is better value than ever before thanks to its upgraded bits. Frankly, it doesn’t appear to carry too much of an Apple premium. There are cheaper Ultrabooks available, but most don’t match up in either the screen or connectivity departments, not to mention design and build. 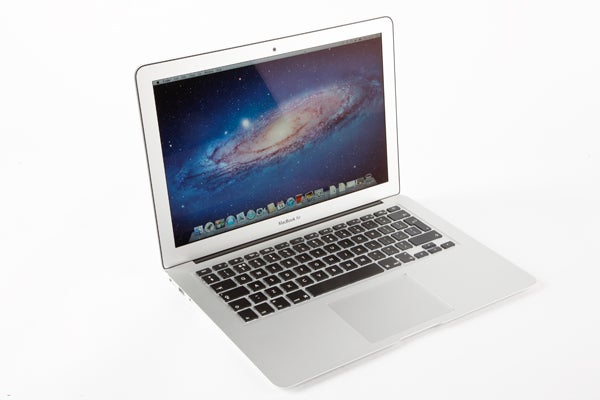 However, some do, and the Air is about to face some tough times due to its lack of upgrades – especially where the screen is concerned. In this regard, it’s already outperformed by the Samsung Series 9 900X3B with its matt 1,600 x 900 PLS panel, and will be absolutely annihilated by the 1080p IPS Zenbook Prime UX31a.

Once the former receives its Ivy Bridge update and the latter makes it to the UK market, only the Air’s Thunderbolt connectivity will still give it an edge, but we’ll cross that (Ivy) bridge when we come to it. In the meantime, if you desire MacOS the easy way or must buy now, the 2012 Air is well worth considering. Otherwise, we’d recommend holding off just a little longer to see what others will bring against it. 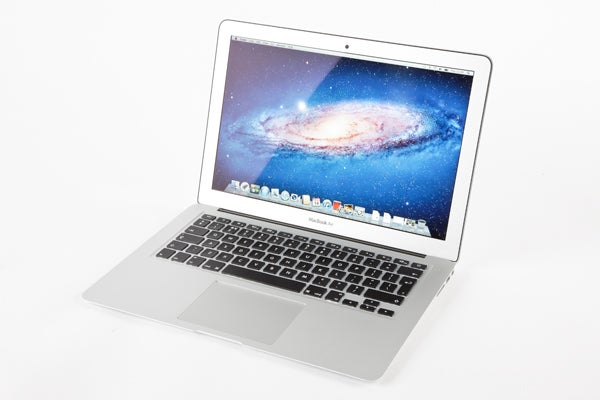 MacBook Air 2012 Verdict
Apple has updated what was already one of the better ultraportable laptops on the market to keep it competitive, with a downright impressive set of specification upgrades and (in theory) some of the best connectivity going thanks to its dual USB 3.0 and Thunderbolt combination. However, we can’t say we’re not disappointed to have the same old 1,440 x 900 TN screen rather than an IPS-panel Retina display, especially since some of the competition will be packing 1,600 x 900 or even 1080p IPS screens on their premium 13in Ultrabooks.