The Panasonic FZ2000 is a bridge camera, but perhaps not in a form you’d expect. It’s designed to be an all-in-one solution for those who don’t want the hassle and expense of carrying around multiple different lenses.

It’s about the size of a DSLR, but it has a 20x optical zoom. Inside is a 1-inch sensor, of the type we’ve been used to seeing in premium compact cameras for some time now – significantly smaller than a DSLR or CSC sensor, but significantly larger than the average bridge camera sensor.

As with most other Panasonic cameras – certainly its most recent generations – it offers both 4K video and 4K photo. In fact, the company says that this camera is aimed at videographers as well as photographers. 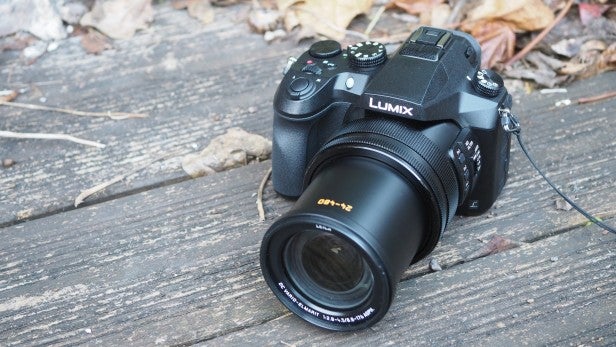 The FZ2000 is by no means a small camera. At first glance you could easily be forgiven for thinking it’s a DSLR, thanks to a chunky grip and its overall shape. This isn’t necessarily a bad thing, but if you’re looking for something small and compact then this isn’t the camera for you.

However, it’s worth remembering that to get the equivalent focal length in a DSLR lens you’d actually need something that’s far bigger – which would definitely weigh you down on your travels.

As such, the FZ2000 is designed for those who want a more manageable size of camera (or rather, overall kit), without having to compromise too much on image quality.

The camera feels well built and sturdy in the hand, with the textured coating on the grip adding to that feeling of high quality – and so it should, considering the high price point.

Around the camera you’ll find an array of dials and buttons, which reflect the needs of audience this camera is pitched towards. There are three customisable function buttons on the lens barrels alone.

Head into the main menu and you’ll discover that you can choose between dozens of different options per function button, to set up the camera in exactly the way you want to use it.

There are a further three function buttons – two on the back of the camera, and one on the top of the camera – plus there are also “virtual” function buttons that appear on the screen. Basically, it would be possible to assign almost every single setting to a specific button to give you quick access when you need it. 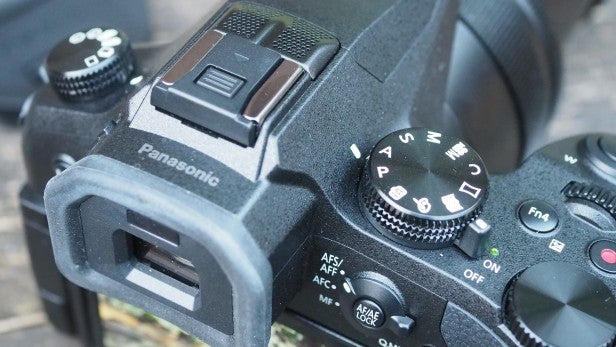 Also found on top of the camera is a large mode dial for choosing between different exposures, such as fully automatic, manual and semi-automatic modes. There are scene modes, a space for a custom mode and a panoramic mode too.

A second dial enables the selection of the drive mode, and is where you’ll also be able to switch on the 4K photo modes. A third dial is used for different functions depending on the shooting mode (for instance, you can use it to set aperture while in aperture priority).

There’s a smaller scrolling dial just behind the shutter release. This, too, is unmarked and used for various functions. It can control aperture when in aperture priority, when shooting in manual mode. You use the front dial to adjust aperture, and the rear dial to control shutter speed.

By default, the Fn5 button accesses the camera’s quick menu. Here you’ll find a collection of useful settings than can be changed simply by navigating by touch, or by using the navigational physical keys. This saves you having to delve deep into the main menu, offering a time-saver.

4K Photo has become a very popular feature on Panasonic cameras. With it you can extract 8-megapixel stills from 4K video to capture that definitive moment.

There are three different options available: you can either have the camera start recording 4K with the press of a shutter button, and stop when you press it again; or you can have it so it’s continuously recording, so long as you have the shutter button held down. Alternatively, you can also have it record just two seconds of a video – one second before you fully depress the shutter, and one second after. This final method is great if you’re roughly aware of when the moment you want to capture will happen.

Once you’ve taken your shot, you can scroll through the resulting frames in the camera, choosing whichever one you want to be saved as a JPEG. It’s a great option for anything that’s fast moving – such as pets, kids or sport – and it’s pretty intuitive to use.

4K Photo also offers the ability to focus “stack”. That is, the camera will take a series of photos at different focal points. Not only does this allow you to select a different focal point in playback if you wish, it also means you can merge all of the photos together to create something with a huge depth of field. 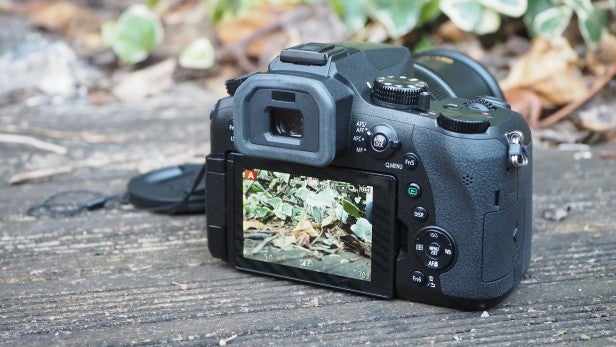 The viewfinder – which is essentially the same unit that appears in the recently announced G80 compact system camera – is bright and clear, and offers a great view of the scene.

It’s certainly one of the largest in this sector of the market, and compares well against the poky numbers seemingly added to bridge cameras as an afterthought. There isn’t any noticeable lag when panning in good light, while the eye-sensor that switches it on (and turns the screen off), offers a familiar, DSLR-like feel to using this camera.

Around the back of the camera you’ll discover a fully articulating, touch-sensitive LCD screen. It includes the ability to completely fold back on itself when not in use. You can use the touchscreen to set autofocus point, fire off the shutter, and navigate through various menus and so on.