Micro Four Thirds users have never been short of a good selection of telephoto lenses from which to make their selection. Add together all the telephoto zoom options from Panasonic, Olympus and third-party manufacturers that cater for the Four Thirds mount, and you’ll realise there’s a significant offering and some sensational examples.

Two standout zoom lenses are the Panasonic 100-400mm f/4-6.3 Power OIS and Olympus 40-150mm f/2.8 Pro M.Zuiko Digital. However, when the number of telephoto zooms are compared to the number of fixed telephoto primes that exceed the 100mm focal length, it becomes obvious that the latter are fairly thin on the ground.

Late last year, Panasonic looked to address its shortage of fixed telephoto lenses by unveiling the Panasonic Leica DG Elmarit 200mm f/2.8 Power OIS. Given the opportunity to find out how it performs, I jumped at the chance to put it through its paces in the type of environment that it’s likely to see regular use.

Micro Four Thirds lenses are renowned for being smaller, lighter and generally less cumbersome than DSLR optics. When you consider the 2x crop factor, and the fact that what we’re looking at here is essentially a fixed 400mm f/2.8 lens, it won’t be long before you appreciate how compact it is compared to DSLR equivalents. 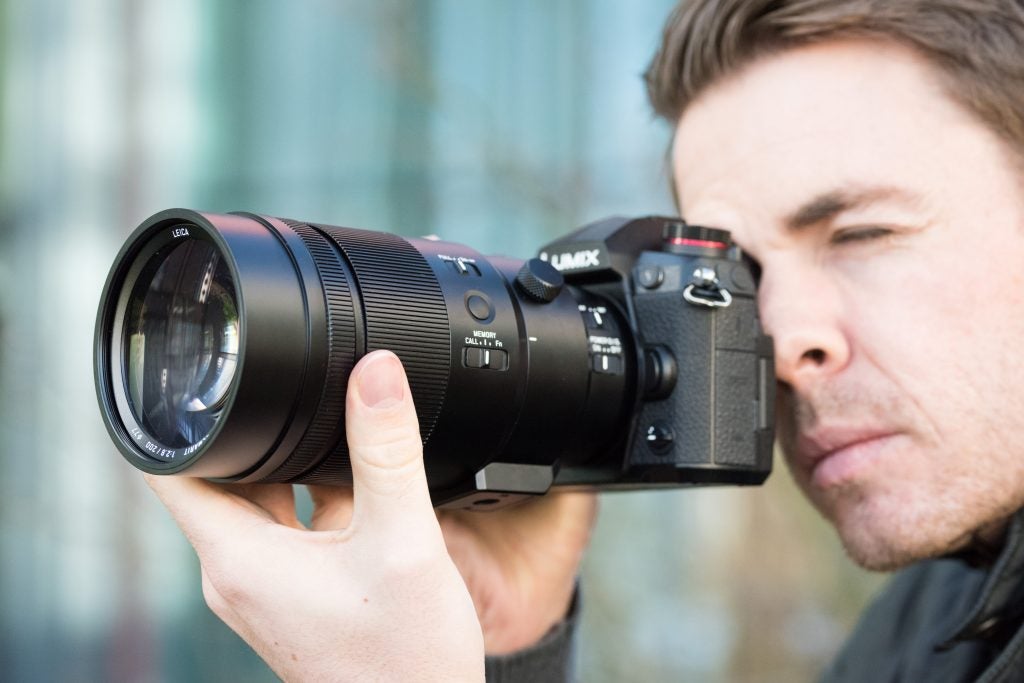 The lens was paired with the Panasonic Lumix G9 for testing

Better still, Panasonic throws in a 1.4x teleconverter as part of the package, providing an impressive 560mm reach without having to spend a penny more.

As a lens that looks set to entice sports and wildlife photographers, it has to put in sensational performance to entice serious users to part with more than £2500. Panasonic claims that this has been successfully achieved by designing a complex arrangement of 15 lens elements in 13 groups. A pair of UED (ultra extra low dispersion) glass lenses are also included to achieve high resolution while suppressing distortion and chromatic aberration. Nine circular aperture blades make up the optical design. 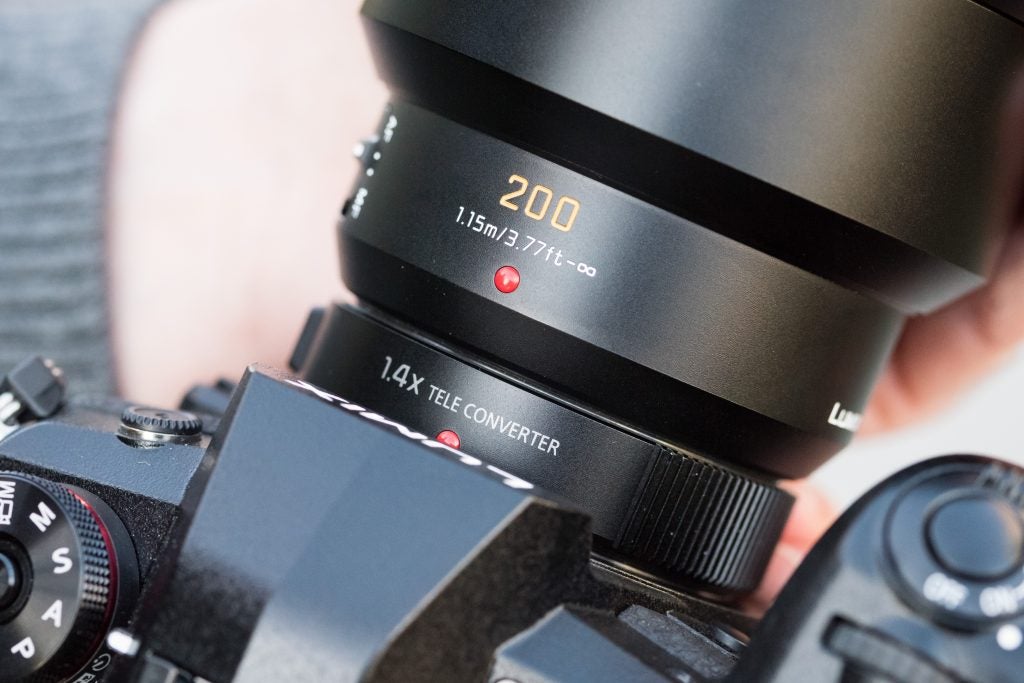 Using the 1.4x teleconverter turns it into a 560mm lens with a 1-stop reduction in maximum aperture

The lens is equipped with built-in optical image stabilisation to counteract handshake. It’s been designed to work most effectively with Dual IS (Image Stabilizer) and Dual IS II systems, which you’ll find on most Panasonic Lumix G-series cameras – and which provide up to 6.5 stops of compensation with the latter. That said, there’s nothing to stop it being used with Olympus camera bodies that feature in-body 5-axis stabilisation, such as the Olympus OM-D E-M1 Mark II.

At the front, the lens accepts filters and adapters via the common 77mm thread size. Other important features of note include its 1.15m minimum focusing distance and the accessories supplied in the box. These include the 1.4x teleconverter (DMW-TC14), a long plastic lens hood, removable tripod mount, lens cap and storage bag.

The lens sports similar styling to Panasonic’s 100-400mm f/4-6.3 Power OIS telephoto zoom, tapering in towards its metal lens mount at the rear. It has a very high-end finish, with engraved painted lettering, knurled lens-collar release and tripod mount knobs. The only thing I’d say about the latter is that it would benefit from a hexagonal hole, to allow for tightening with an Allen key. In use, I found it rather difficult to get a tight enough turn to prevent it coming loose. Those with smaller fingers may find it easier, however. 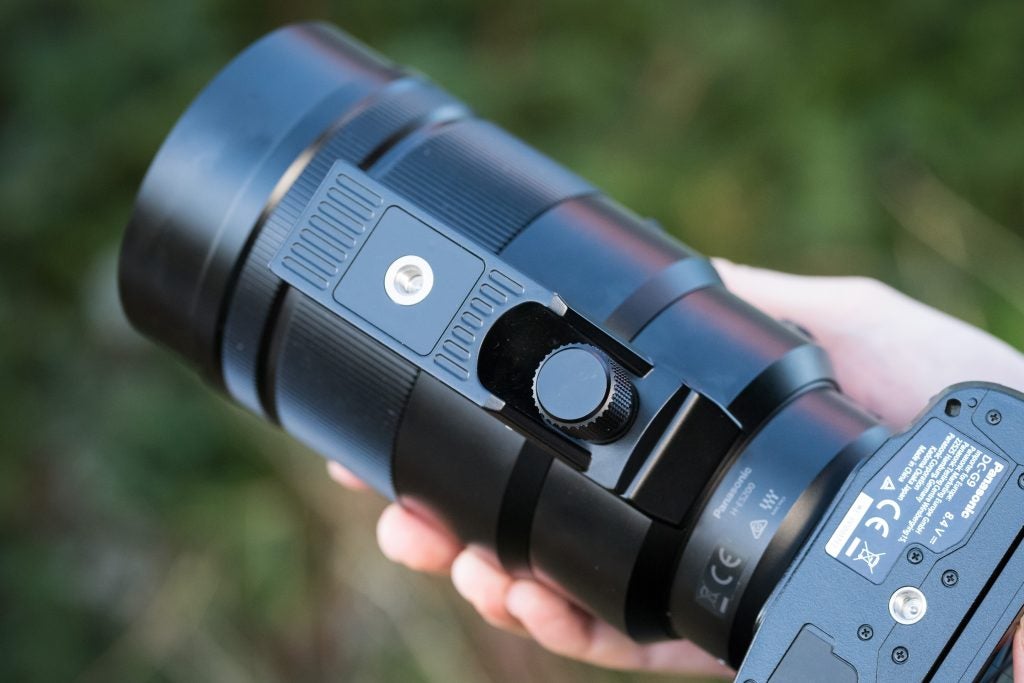 Unlike the tripod mount, the lens collar isn’t removable. However, it does rotate fluidly and the white lines on the barrel offer a visual aid for aligning it precisely in landscape or portrait orientation.

The lens feels well balanced if coupled to G-series cameras with a large grip, such as the Lumix G9 and Lumix GH5. It isn’t an unwieldy lens, by any means, and can be comfortably hand-held for long durations without the need for a monopod or tripod.

This makes it ideal for times when you’d like to travel light. It allowed me to shoot spur of the moment shots on safari with ease, where there’s often little space or time to assemble any additional support. 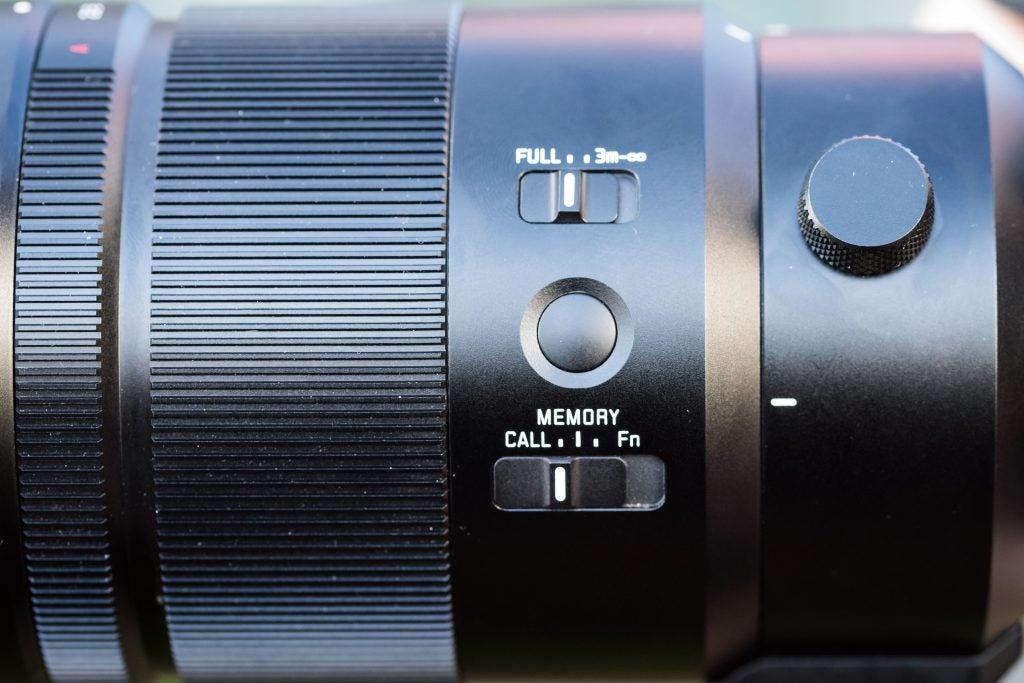 The barrel rests comfortably in the palm of the hand, without feeling too chunky. The AF/MF and Power OIS switches are set back towards the rear and have a slightly different profile to one another, so you can identify which is which from behind the camera. Ahead of the lens collar is a focus range limiter switch; below this is a function button that can be pressed to acquire focus in an instant when the associated switch is set to Call.

The memory switch setting is useful for recording a focus position and recalling it later, while the Fn setting allows users to customise which feature the function button provides direct access to. Ahead of these controls you’ll come across a smooth-to-operate focus ring and fairly thin aperture ring that clicks through its range in 1/3-stop increments from f/2.8 to f/22. 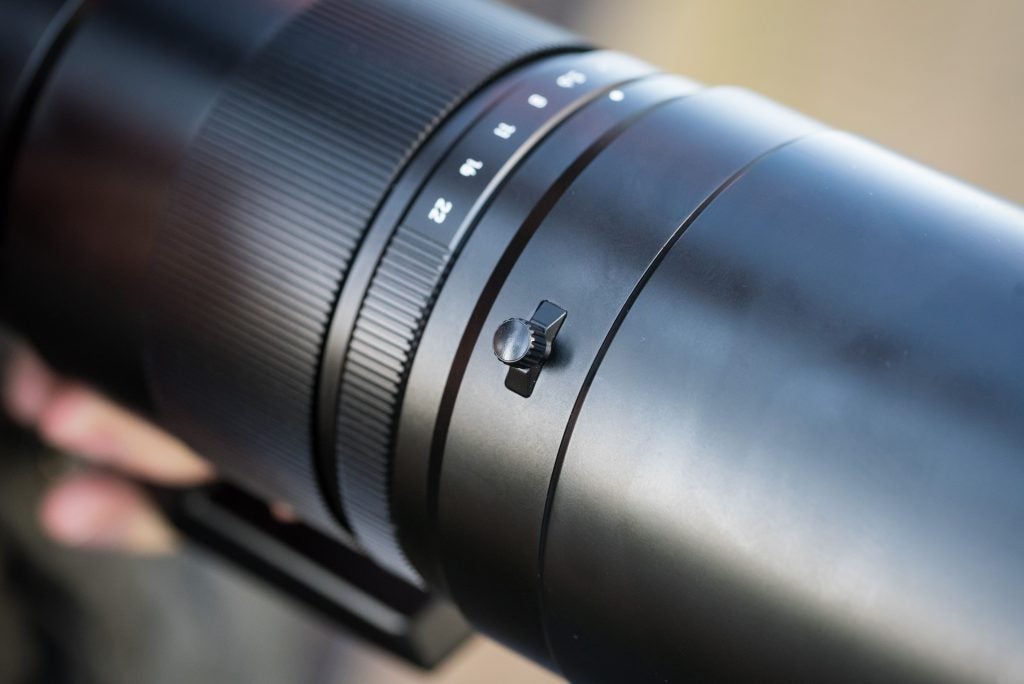 As is to be expected of a lens that will see more use outdoors than indoors, it has a freeze-, dust- and splash-proof construction. The lens became wet during a rain shower, but didn’t show any ill-effects, continuing to work faultlessly during testing.

Real-world testing of the lens produced very satisfying results. Although I could only review images on the rear screen of the camera whilst on safari, inspection at high magnification in playback mode suggested the lens was delivering some extremely sharp results. 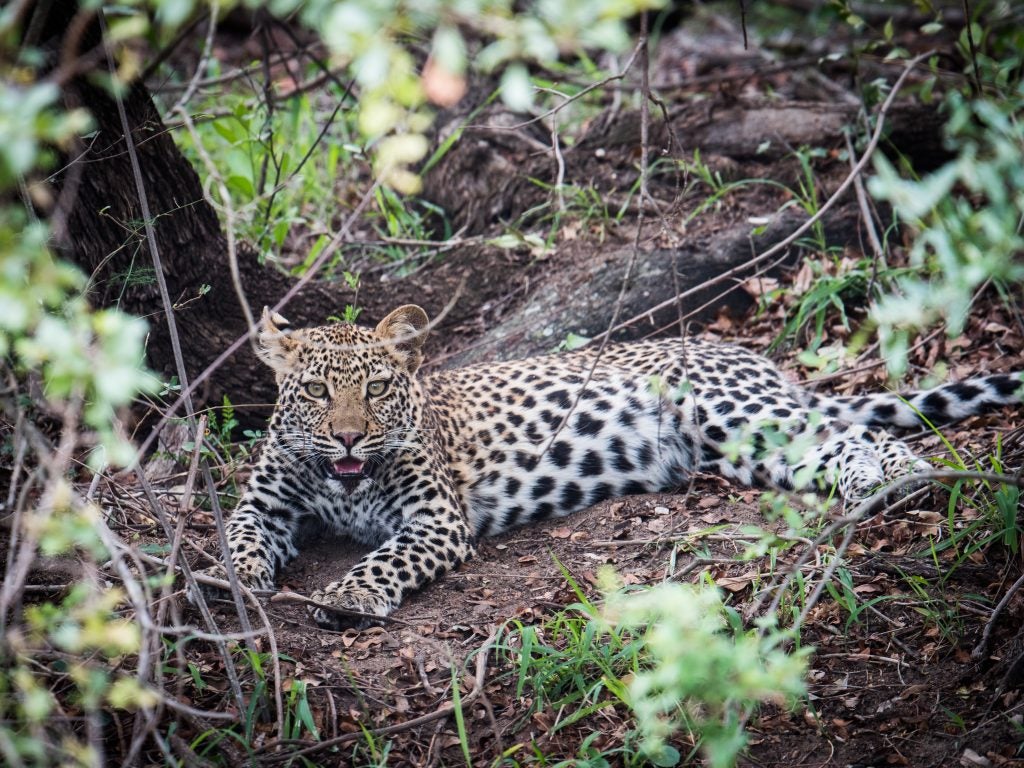 The effectiveness of camera and lens stabilisation worked a treat when the lens was used handheld. With the camera braced against my eye, and the lens supported in my left hand, I captured sharp shots as slow as 1/15sec. Turning the Power OIS off and on again is a real eye-opener of how effective it is at negating the camera shake that’s accentuated at such a long focal length. 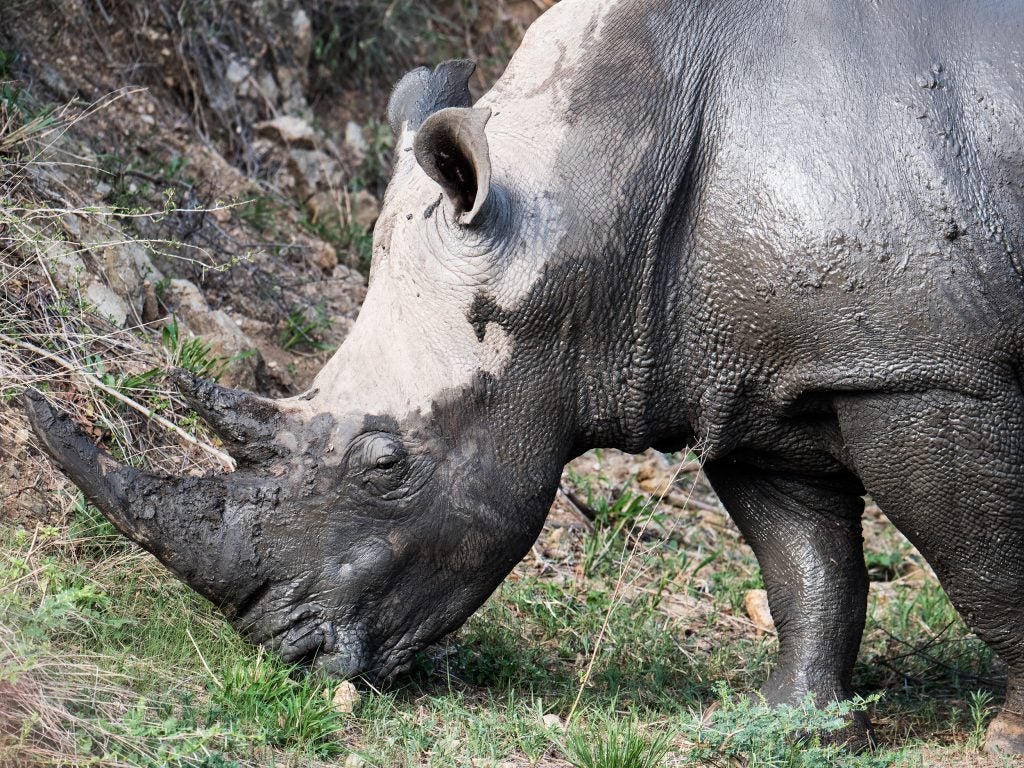 Once back at the office, results taken in the lab were carefully inspected alongside my safari images. Shots taken at f/2.8 create pleasing bokeh, both in front of and behind subjects. However, to eke out the best sharpness from centre to edge it’s worth closing it down by a stop to f/4. 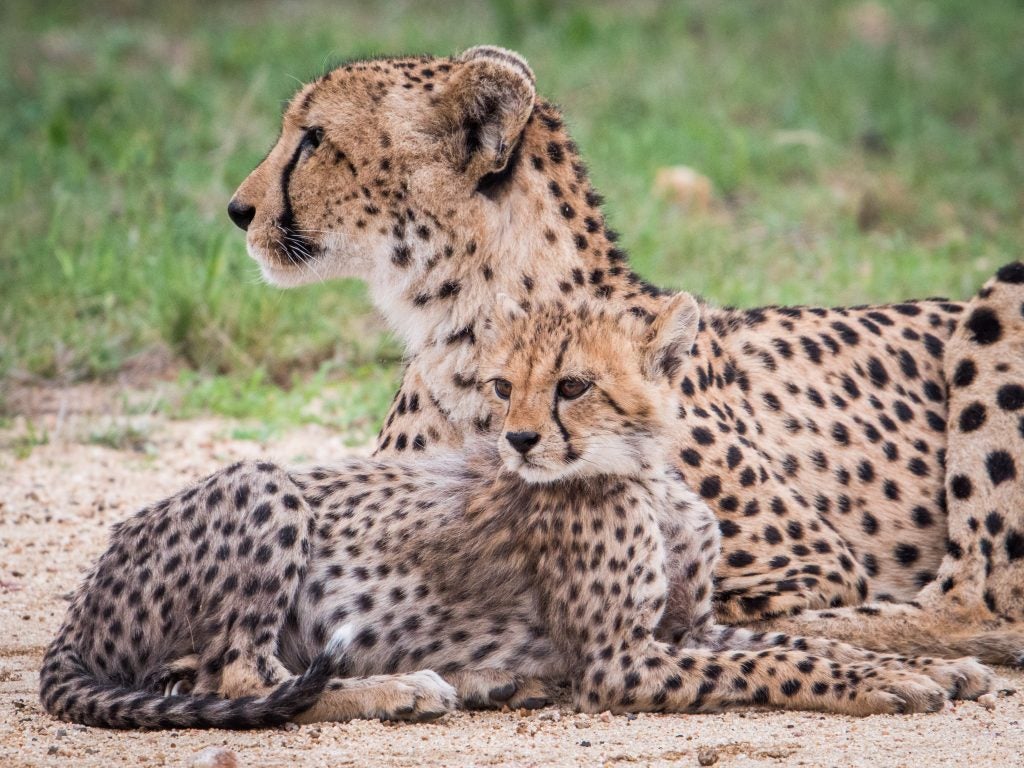 Lab tests confirmed my real-world findings that f/4 is the sweet-spot, with centre and corner figures at f/8 being similar to those recorded at f/2.8. The impact of diffraction generally hits Micro Four Thirds lenses a couple of stops earlier than full frame, so it’s advised that aperture settings beyond f/11 (f/16 and f/22) are avoided. 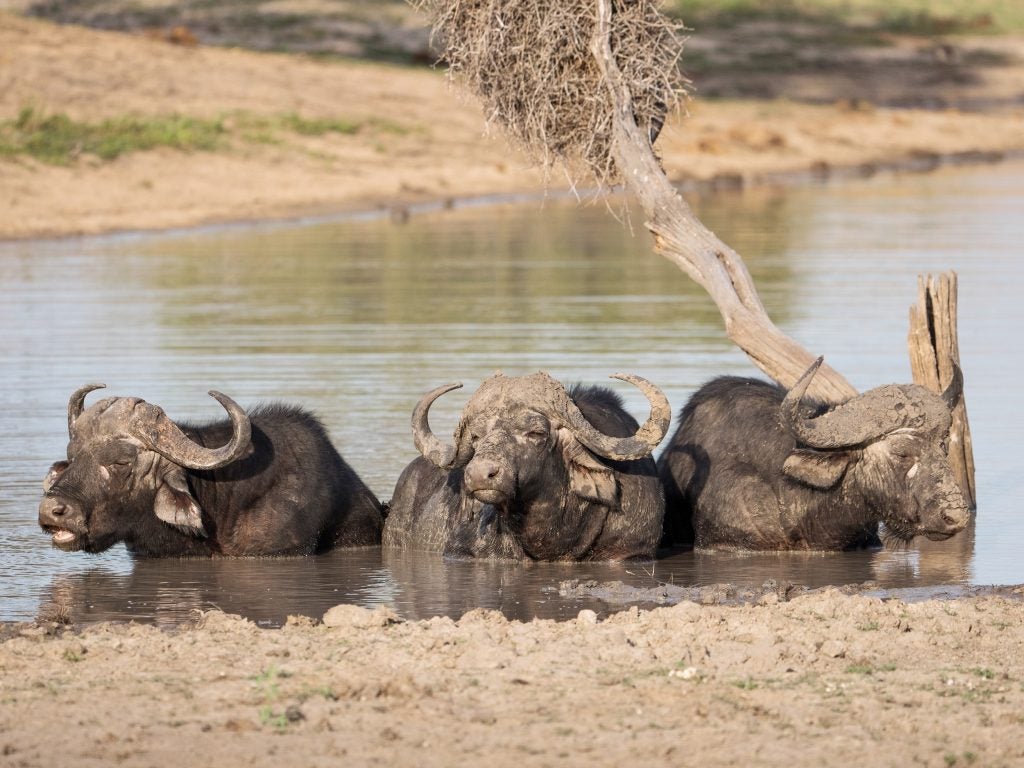 Corner shading is well handled, too, and isn’t visually intrusive. As our shading tests reveal, the edge of the frame is 0.5EV darker than the centre at f/2.8. Those who use the lens with the supplied 1.4x teleconverter will also be glad that images don’t suffer from dark corners, even with the 1-stop reduction in maximum aperture at f/4. 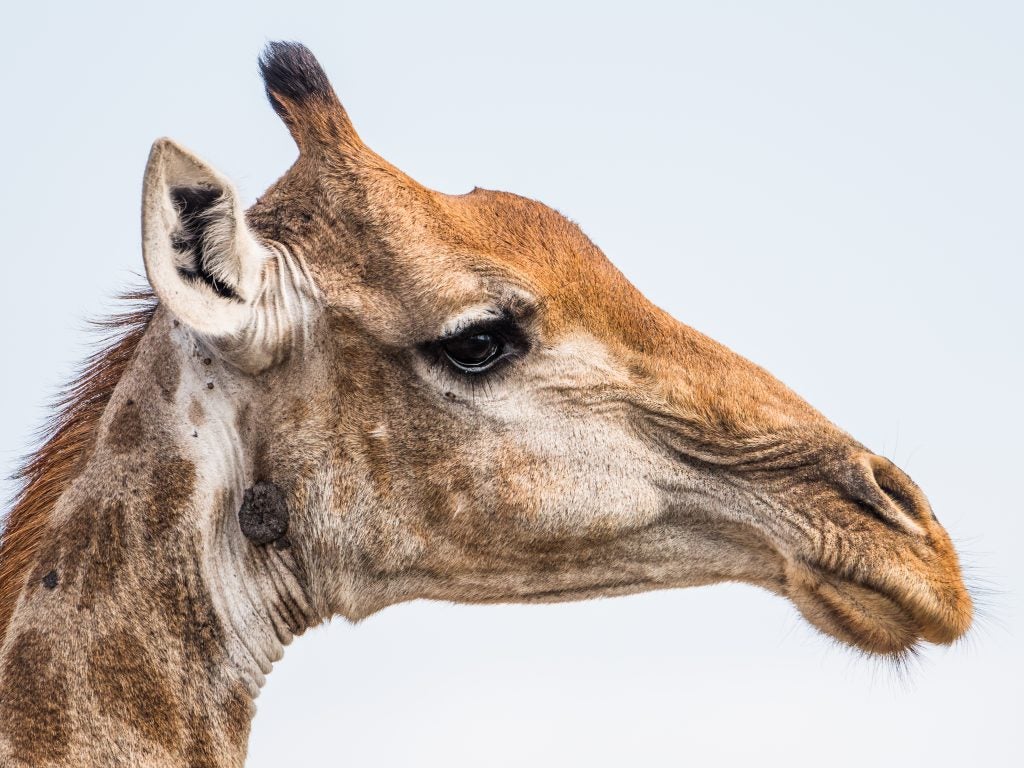 Typically for a lens that’s designed to excel at a fixed focal length, curvilinear distortion is virtually non-existent. Users can shoot with confidence that images won’t suffer from barrel or pincushion distortion towards the edge.

The graph shows that the lens is sharper in the centre than at the edge when it’s used wide open at f/2.8. Stopping the aperture down sees the level of sharpness in the centre and at the edge improve, to where it peaks around f/4.

Centre and edge sharpness remain higher at f/5.6 than at f/2.8, but by f/11 sharpness starts to plummet as diffraction starts to take its toll. For the best sharpness users should use the lens between f/2.8 and f/8, whilst steering clear of f/16 and f/22. 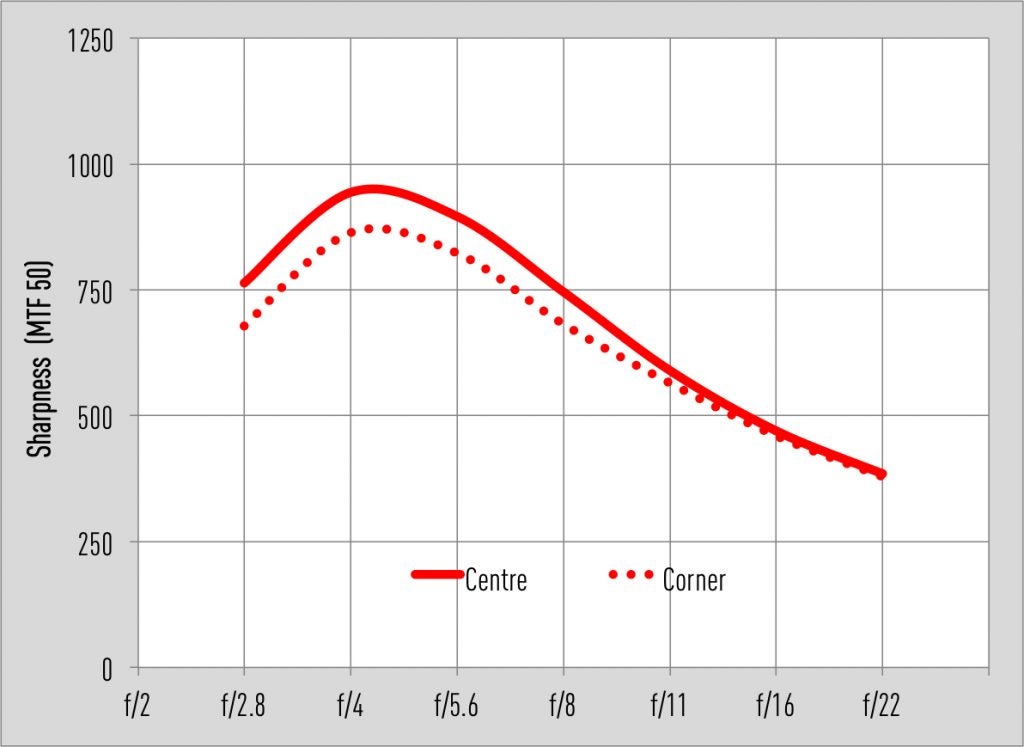 The vignetting that appears when the lens is used at its maximum aperture isn’t a huge cause of concern. The fall off recorded at f/2.8 was 0.5EV, which reduces to around 0.3EV when the lens is closed down a stop to f/4.

By the time the lens is stopped down to f/5.6, corner shading is virtually non-existent. As the sample images above show, the lens can be used at its maximum aperture without vignetting being too visually disturbing. 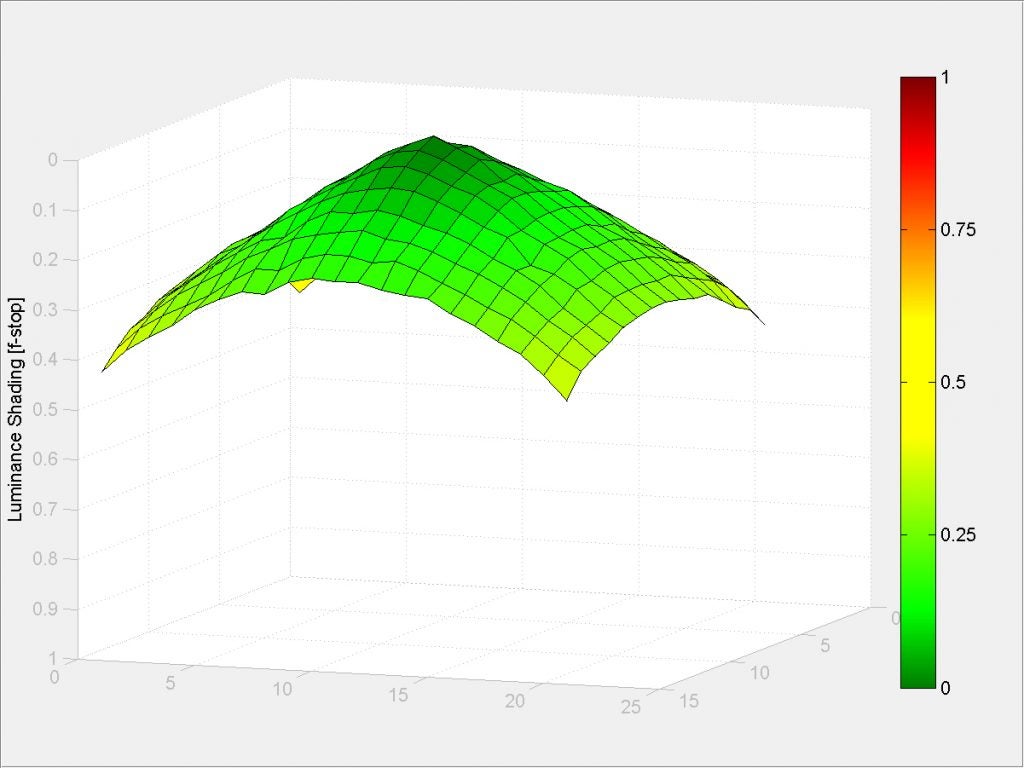 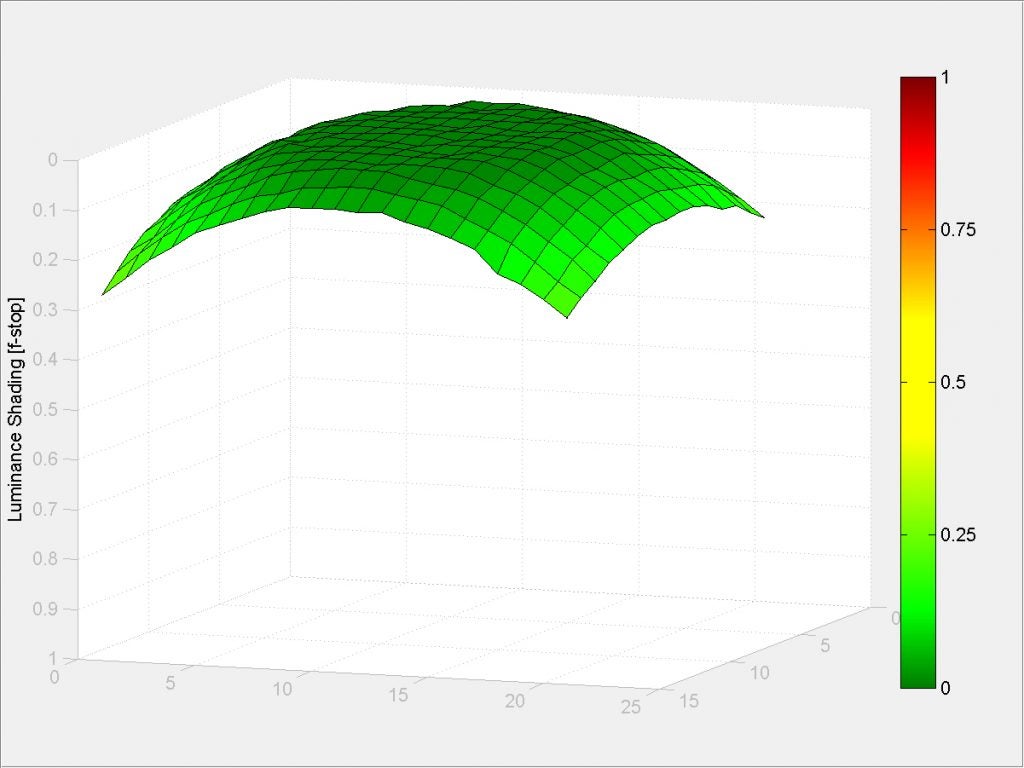 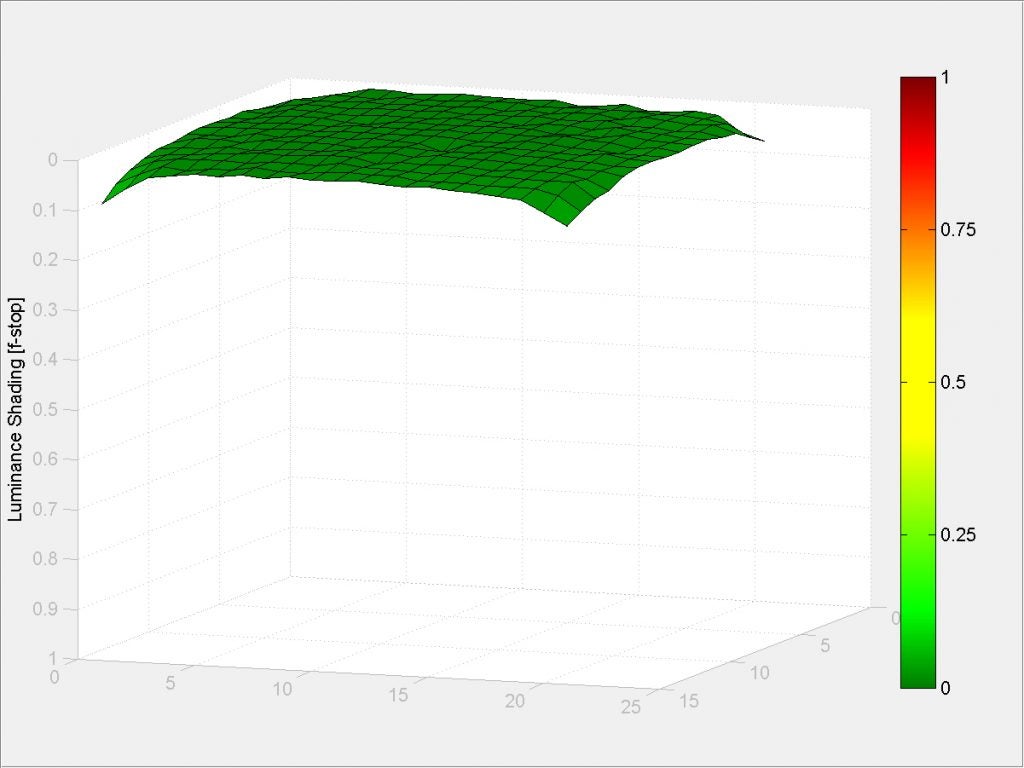 As you’d expect from a long telephoto prime, distortion is well controlled. The lines on the distortion chart are rendered perfectly straight right into the corner of the frame. At the time of testing a lens profile wasn’t available in ACR or Lightroom CC; however, it’s expected to arrive in a future update. 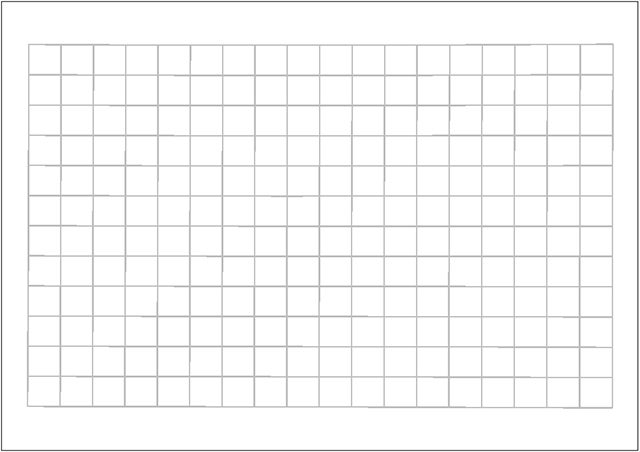 Buying a long and fast, fixed focal length telephoto prime always involves spending a vast amount of money – and it’s usually the case that they’re worth considerably more than the value of the camera with which they’ll be paired.

Although I can’t deny that £2699 is a huge amount of money to drop on the lens reviewed here, the fact it’s around £7000 cheaper than a 400mm f/2.8 telephoto prime for a DSLR, and is approximately one-third the size and weight of typical 400mm DSLR lens, does provide some justification for serious sports and wildlife photographers.

Most importantly, it’s a sensational performer. It delivers the razor-sharp results one expects from a lens of its pedigree, while being nimble for handheld shooting and compact enough that it doesn’t take up too much space when you’re travelling. 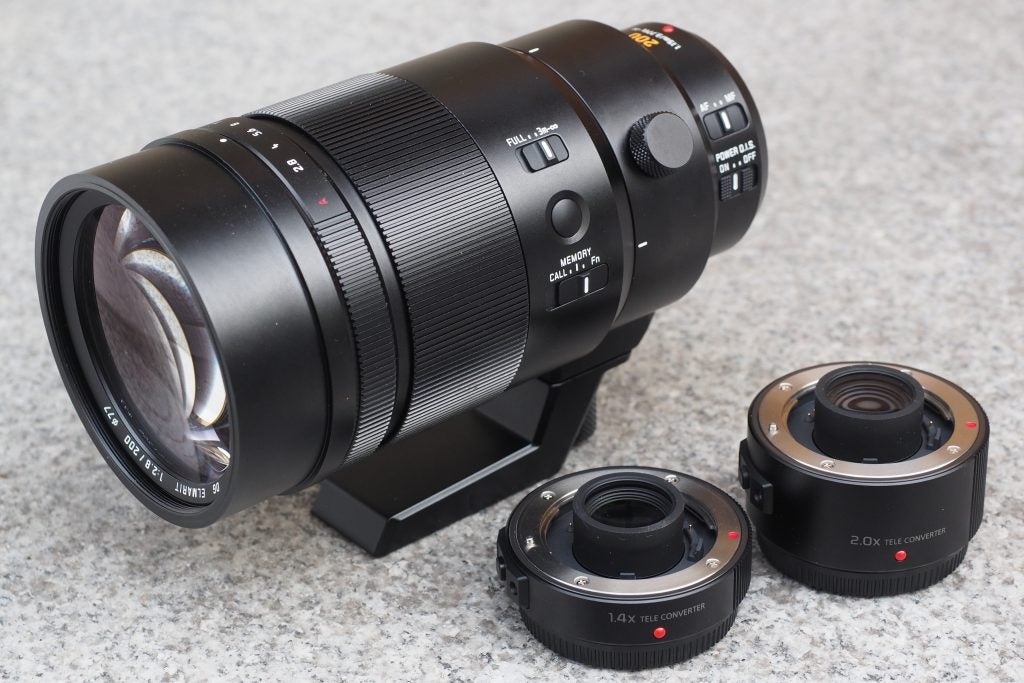 As I discovered, it’s a superb safari lens and the 1.4x teleconverter can make all the difference between filling the frame with your subject and not. Having the converter bundled in the box is the icing on what is one of the finest telephoto prime lenses ever made for the Micro Four Thirds mount.

And if all of the above wasn’t good enough news, the lens is now being stocked by lens-hire companies such as Hirecamera.com, where for £42 a day (excluding VAT) you can try before you buy – or rent it for a once in a lifetime trip.