Where JVC has put up a good fight at the budget end of the market, conversely Panasonic has tended to dominate the higher end more, with models like the HC-X900. But it can still put together a keenly priced, decently specified budget model, which is where the HC-V100 comes in. Priced well below the £200 mark, it competes directly with the JVC Everio GZ-E15, and many of its specifications are very similar too.

For starters, the V100 has an identically sized 1/5.8in CMOS, with an identical 1.5Mpixels. Panasonic doesn’t divulge whether this is a back-side illuminated sensor, however. The optical zoom isn’t quite as powerful as the E15’s, maxing out at 37x, but the iZoom mode boosts this marginally to 42x, and is available in HD, whereas the E15’s Dynamic Zoom only operates in standard definition mode. However, with no spare pixels on the CMOS the iZoom will reduce resolution slightly when used, as it crops into the frame slightly.

The Panasonic HC-V100’s image stabilisation is also optical, which is an incredible inclusion at this price. This is Panasonic’s Power OIS, with Active mode. The latter is aimed at smoothing the lower frequency vibrations caused by shooting whilst walking.

The V100 shoots AVCHD at Full HD resolution, with data rates up to 17Mbits/sec. There is no standard definition option, but you can shoot in iFrame mode, which has a resolution of 960 x 540 and is essentially a quarter of Full HD. This mode runs at a 28Mbits/sec, so loses resolution compared to HD but also offers considerably less aggressive compression.

Unlike the JVC Everio GZ-E15, the V100 also shoots digital photos, although with just a 1.5Mpixel sensor these are far from the quality of even the cheapest dedicated compact camera. With a little interpolation added for good measure, digital photos are snapped at 2.1Mpixels, which is below what even most smartphones can muster these days, so this feature is really only here for very occasional usage. Footage and photos are captured to SD memory card via the single SDXC-compatible slot. At the top Full HD video data rate, a 16GB SD card will be enough for about two hours of footage. 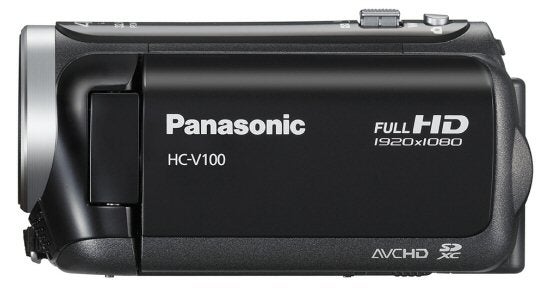 If the digital photography abilities are a little half-hearted, the range of manual settings really isn’t. In Intelligent Auto mode, the camera will attempt to detect conditions and set a scene mode accordingly, or you can choose one yourself. There are ten of these available, including the usual sports, portrait, snow, landscape and night modes amongst others. But this requires a trip to the main menu, and there are some options more readily available via a quick menu. The V100 has menu and enter buttons plus a D-pad on the edge of the LCD, which makes them pretty easy to use. Pressing the enter button and using the D-pad on its own gives you rapid access to enabling backlight compensation, tele macro mode, the pre-rec buffering option, and various onscreen gridline configurations.

Switch to manual mode, however, and this quick menu includes quite a few more options. There’s manual focusing, although this is a little fiddly to adjust with a D-pad. You can choose between four white balance presets, two for outdoors and two for indoors, as well as auto and manual modes. The iris can be configured between F8 and F1.8, with up to 18dB of video gain available on top of a fully open aperture. Meanwhile the shutter can be varied between 1/50th and 1/8000th of a second. Best of all, shutter and iris can be configured separately. There are also intelligent contrast, soft skin and colour night view settings available via the quick menu. So the manual settings are very comprehensive, and similar to what is available in Panasonic’s higher-end models. 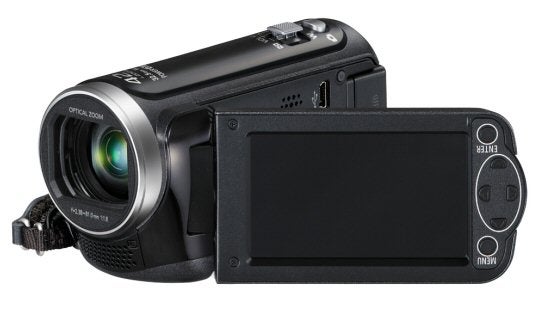 This is still a budget consumer camcorder, though, so there is no accessory shoe, and no minijacks for attaching an external microphone. The V100 sports a mini HDMI port and proprietary AV port for outputing analogue video. The latter provides both composite and component analog video output, alongside stereo audio via a pair of RCA plugs, using a multi-cable that is included in the box. But there’s no headphone option for the AV port, and no way to go beyond the built-in stereo microphone. The V100 does have a solid build, though, and belies its price by not feeling like a cheap camcorder.

Image quality is very reasonable for a sub-£200 camcorder as well. In the best lighting conditions, the picture is bright and colourful. Saturation is quite rich, but not as popping as most Sony camcorders produce. Panasonic tends to err on the side of realism here, which we prefer. Detail is also good, although if you look closely you can see a very slight lack of sharpness compared to premium models. We weren’t sure what to expect in low light, as the V100 doesn’t explicitly sport a back-side illuminated sensor and the CMOS is quite small. But the camcorder acquits itself surprisingly well as illumination drops, with an image that is at least as bright as JVC’s Everio GZ-E15. Colours are actually richer, too, and grain only appears in really dark conditions. 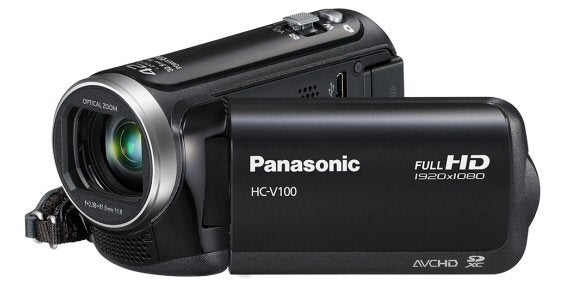 So the V100 is another budget camcorder that doesn’t fall foul of what used to be the curse of budget models, where they were particularly poor at shooting in the gloomy indoor conditions home videomakers often want to record in. The V100’s Power OIS image stabilisation is also very effective (and unlike JVC’s Advanced Image Stabilisation (AIS) doesn’t reduce image quality by cropping into the frame, although AIS is pretty effective too) so you can safely leave it on most of the time, unless it is causing issues with your camera moves.

If you’re on a tight budget, Panasonic’s HC-V100 is a very tempting proposition, with a street price of around £170. Although the JVC GZ-E15’s £150 price wins out for sheer cost-conscious value, the HC-V100 gives you a greater range of manual settings, which are easier to access, as well as digital photography and optical image stabilisation. So if you can afford the extra £20, it’s worth the additional outlay, and if you were considering a pocket Internet model in this price range, we would recommend you save up for the V100 instead. You will get much better results.