JVC might not have the top end of the camcorder market exactly sewn up, but it regularly competes very well at the other end. Priced in the same league as pocket Internet models, the JVC Everio GZ-E15 is nevertheless a fully-featured camcorder, with quite a few more settings and options.

Unlike the candybar and pistol-grip models that have been increasingly popular over the last few years, the JVC Everio GZ-E15 uses the conventional handycam format. A 2.7-inch LCD panel flips out from the side, with the record button where your thumb naturally rests, and the zoom rocker on the top. The strap on the side doubles as an adjustable wrist loop, to assist carrying the camcorder when not in use.

The JVC Everio GZ-E15 is based around a relatively lowly 1/5.8-inch CMOS sensor with just 1.5-megapixels. This isn’t quite enough natively for the Full HD video that the camcorder shoots, but the sensor is back-illuminated, so should outperform its dimensions in low light. The familiar AVCHD recording format is used, with data rates available up to 24Mbits/sec. You can also shoot in standard definition, with the standard MP4 format adopted in this case. A single SDXC-compatible memory card slot is provided, with a 16GB module providing enough storage for around 90 minutes of footage at the top quality setting. It’s worth noting that this camcorder doesn’t have the ability to take photos, however, which is somewhat unusual these days and might make it a less attractive option for some. 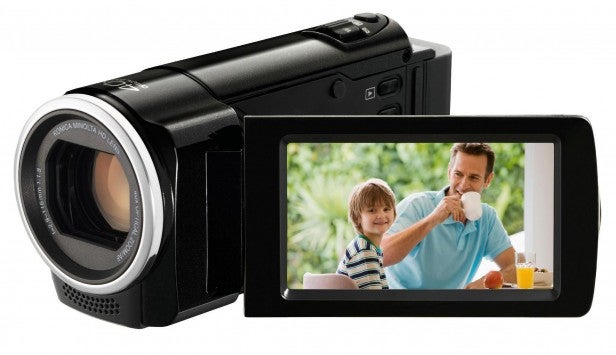 The JVC Everio GZ-E15 incorporates JVC’s Advanced Image Stabiliser (AIS). This is an improved form of digital image stabilisation, which has been combined with optical image stabilisation in JVC’s higher-end models, but not in this case. It crops into the frame, where the JVC Everio GZ-E15’s regular digital image stabilisation doesn’t noticeably, but is much more effective at smoothing out jerky handheld camerawork. The regular handycam-style camcorder body means there’s plenty of room for lens movement, so the JVC Everio GZ-E15 offers a decidedly decent 40x optical zoom, and there’s a 70x Dynamic zoom available in standard definition as well. The lens protector is also manual rather than automatic, so you will need to remember to flip it open and closed yourself for each shooting session.

One area where the JVC Everio GZ-E15 definitely puts itself ahead of only slightly cheaper pocket Internet models is its manual settings and features. You can enable fully manual mode using the button on the top of the camcorder, just behind the zoom rocker, which is often used as a digital photo button on many camcorders, although as we mentioned earlier the JVC Everio GZ-E15 doesn’t have this ability. Switching to manual mode enables scene modes, although there are actually only two of these – Nightalive and Spotlight – not the usual array of sports and landscape options.

You can also focus manually, and adjust brightness between -2 and 2 EV, although it’s not possible to configure shutter and iris separately. Alongside the auto mode, white balance options include presets for sunny and cloudy conditions as well as halogen indoor lighting, but not tungsten, as well as fully manual. Backlight compensation and tele macro modes are also available. However, we would have preferred these modes to be more readily available, rather than buried a few levels inside the menu system. 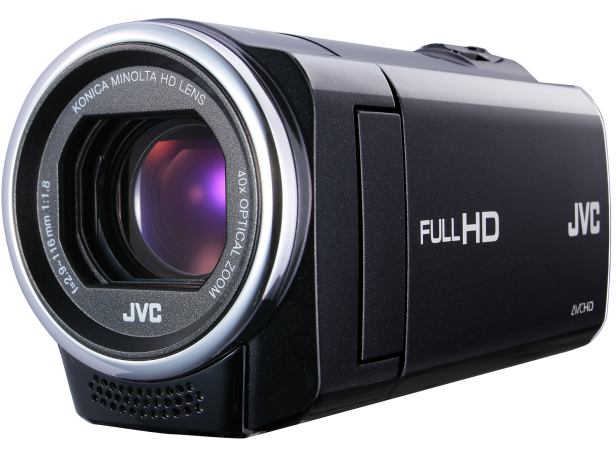 In Intelligent Auto mode, you can still choose whether face priority auto-focusing is enabled. There’s an auto gain up option, and a time lapse facility which can grab a frame at intervals of between one and 80 seconds. However, the settings are a bit fiddly to get to as the JVC Everio GZ-E15 doesn’t have a touch-sensitive LCD, instead relying on the buttons on the side of the camcorder body for control. Bizarrely, there’s no physical power button on the camcorder body, either, so the only way of turning the JVC Everio GZ-E15 off and on is by opening and closing the LCD panel. Another omission compared to JVC’s higher-end models is the funky animated effect system found in, for example, the JVC HD Everio GZ-V515. We don’t particularly miss it ourselves, but some would enjoy these facilities.

The JVC Everio GZ-E15 offers both analog and digital outputs, with a minijack for the former and a mini HDMI port for the latter. A mini USB port is available for downloading footage to a computer. However, there is no output for analog component video. Naturally, though, for an extremely low-cost camcorder, there is neither an accessory shoe nor a minijack for an external microphone. The AV output also doesn’t double as a headphone jack. 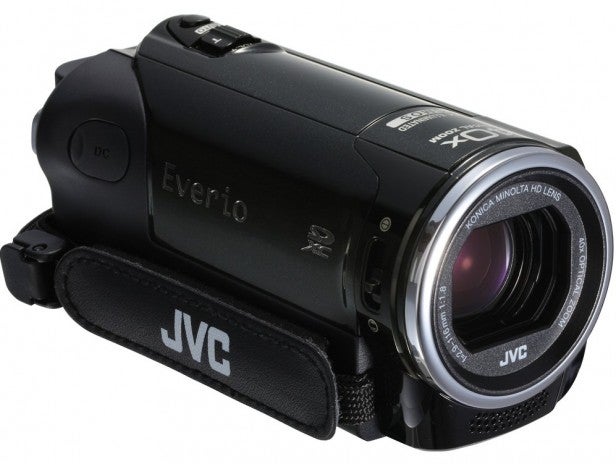 With its small sensor, the JVC Everio GZ-E15 isn’t going to give more expensive camcorders a run for their money in image quality. Nevertheless, there’s a good level of detail and brightness. Colour fidelity isn’t always perfect, with reds rendered a little more brightly than is natural, but otherwise the colours are rich, with good contrast. Thanks to the back-side illuminated CMOS, performance in low light is decidedly impressive for the money. There is some loss of colour as lighting levels drop, but the image remains bright to reassuringly low levels, thanks to the back-side illumination technology. This is a camcorder that will pick up decent video in gloomy indoor conditions. The autofocus is a little slower to react, but the image remains relatively grain free.

We have consistently been impressed by the image quality that JVC’s cheaper camcorders can muster, right from before high definition was the norm with models like the (linkout https://www.trustedreviews.com/JVC-Everio-GZ-MG330_Camcorder_review JVC Everio GZ-MG330). The JVC Everio GZ-E15 follows this tradition. It’s not going to give more expensive camcorders much to worry about, but at a price of £150 or less from some vendors, there are impressive levels of image quality available for the money. If you were considering a similarly priced candybar or pistol-grip format camcorder, the extra features available from the JVC Everio GZ-E15, particularly the 40x optical zoom, could well make it a better choice – if you can live without built-in digital camera capabilities.