Although the UB900 provides a huge wealth of options and adjustments, most people will, I think, get away with tinkering with just a few.

On the audio side, it’s definitely worth trying some of the sound effect options when listening to music, as they adapt the sound to both a wide range of tastes and musical styles.

With video, if you have a TV capable of receiving and playing the full 4K and HDR enchilada, in most cases you’ll be best advised to leave the UB900’s settings alone.

If you have a 4K TV that can’t handle HDR, though, I’d suggest that you set the TV’s manual gamma adjustment for its HDR-to-SDR conversion to a level that matches the claimed brightness of your TV. This certainly seems to improve some aspects of the HDR-to-SDR conversion, especially when it comes to avoiding the silhouetting effect such conversions can suffer with. And it does so at any gamma level without leading to clipping or black level crush in the resulting image.

One other key setup point concerns your TV. With any Ultra HD Blu-ray deck you need to make sure your TV is HDR-ready and that its HDMIs are set to handle HDR’s colour range properly. For instance, with Samsung TVs you’ll need to make sure the HDMI you have the UB900 connected to is switched to UHD Colour. If you don’t do this, your lovely Ultra HD Blu-ray pictures can be spoiled by noticeable colour striping issues.

Aggravatingly, each TV manufacturer calls the correct HDMI mode something slightly different, and right now most don’t switch to the right setting automatically when Ultra HD Blu-ray is detected. You should be able to figure out the right setting from your TV’s instruction manual or on-screen prompts, though. Just make sure you do it!

While the UB900’s audio advantages might not be as instantly obvious as its picture ones, they’re absolutely there. It does an excellent job, for instance, of ‘upscaling’ CDs and even relatively low-quality MP3 rips to a much higher and more enjoyable level of quality – as well as handling Hi-Res Audio formats with aplomb.

Even with movie soundtracks, where differences can be harder to hear, there seems to be slightly more detail and slightly more bass and treble extension in the UB900’s sound than you can discern on the Samsung K8500.

The UB900 is decently swift to boot up and load discs, taking around 29 seconds and 20 seconds respectively.

The UB900’s remote, meanwhile, is about as far removed as it’s possible to get from the small, minimally buttoned handset you get with the Samsung K8500. Truth be told, I mostly prefer the K8500’s handset, but it’s nice to find the UB900’s providing separate skip and shuttle button sets instead of trying to double up both features on a single button set.

Finally, the UB900 boosts its appeal at the time of writing by shipping with free Ultra HD Blu-ray copies of San Andreas and Mad Max: Fury Road – so that’s at least one good film to watch on 4K HDR. 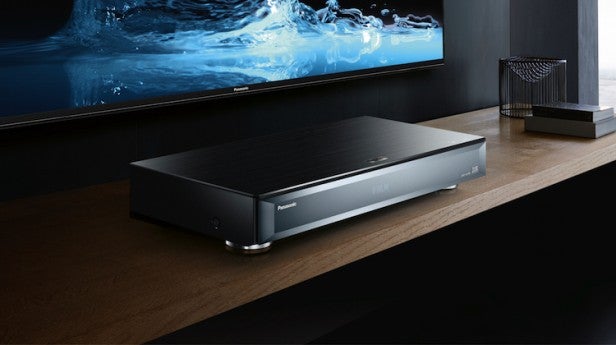 Should I buy a Panasonic DMP-UB900?

There are two things to consider here: does the UB900’s performance comfortably outgun the quality available from the current 4K HDR streaming solutions? And does it do enough to justify its price hike over its Samsung K8500 rival? The simple answer to both questions is a resounding yes.

This makes the UB900 the natural choice for any serious AV fanatic who wants to jump aboard the 4K Blu-ray train. If you want to get the absolute best from your expensive new HDR TV, the UB900 is a brilliant choice. It’s also good enough that, unlike the earliest Blu-ray players, it will stand the test of time.

That said, if you’re unsure about the merits of Ultra HD Blu-ray, there’s no harm in waiting for more discs and lower prices. The UB900 will still be great in a few months, even a year’s, time.

The flag-waving product that Ultra HD Blu-ray needs at the start of its life, and worth every penny of its £600 asking price. Picture quality has simply never looked this good.