What is the Overclockers Titan Finesse Phoenix?

The latest system from Overclockers doesn’t look like a mid-range gaming PC. Its NZXT case is dramatic, tall and angular, and it glows with red lights on the outside and through the side panel’s large window.

It doesn’t share the specs of a middling machine, either. It rumbles along with top-tier hardware from Nvidia and Intel, which means intensive applications and the latest games should pose no problem for this machine.

I’m impressed by the NZXT Noctis 450 chassis. It’s a large, traditional ATX tower that ticks many of the right boxes. The power supply and its cables are hidden behind a smart shroud that runs along the bottom of the case, and the hard disks are stored behind a slab of metal that covers the front of the enclosure.

Those smart design decisions help to keep the Noctis tidy and, overall, Overclockers has done a superb job of making this PC look the business. The Asus Z170 Pro Gaming motherboard is surrounded by rubber-grommeted cable-routing holes, which allow Overclockers to keep cables out of the way and only thread them through when needed – and they’re individually braided with a red and black design in keeping with the colour scheme of the rest of the machine. 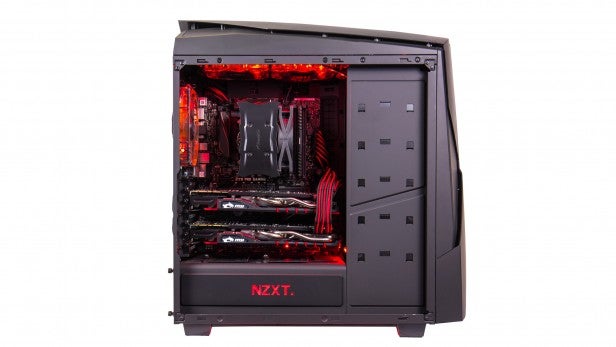 Strip-lights in the roof and fans illuminate the meshed areas on the outside of the case, and the lights on the underside of the case produce a crimson glow from beneath the rig. Another row of LEDs on the inside illuminate the interior, and the Asus motherboard and MSI graphics card both boast red and black heatsinks.

The Titan Finesse Phoenix is tidy and good-looking, and it benefits from reasonable upgrade room too. The shroud at the bottom of the case serves up two empty 2.5in bays, and the slab of metal has four empty hard disk bays. The motherboard itself has free pairs of PCI Express x1 and x16 slots alongside numerous empty SATA ports and two free memory slots. Note that the large Alpenföhn Matterhorn cooler blocks one of those memory sockets, however.

My only real issue is the lack of space. There’s enough room in this machine for its components and most upgrade paths are open, but the shrouds and metal used – and the size of the GPU and the processor’s heatsink – mean the interior does feel a little cramped.

The Overclockers machine is significantly different from its key rivals. The Scan 3XS Z170 Vengeance Q is also a traditional tower, but it’s designed for near-silent operation and its dark case features no ornamentation.

The PC Specialist Ignis is a different beast, too. It’s a mini-ITX system, which means it doesn’t have much upgrade room. But inside you’ll find high-end hardware, and it’s made from a stunning acrylic case that’s far smaller than the NZXT Noctis of the Titan Finesse Phoenix.

There’s an impressive amount of hardware inside this smart-looking system. The key part is the MSI-made GeForce GTX 980 Ti, which is one of Nvidia’s best cards. It’s a class apart from the GTX 980s found inside both of the Phoenix’s rivals.

The GTX 980 Ti has eight billion transistors rather than the five billion included in the lesser GPUs, and the GTX 980 Ti has 2,816 stream processors – almost 800 more than in the GTX 980. And with 6GB of memory, too, the Phoenix is 2GB more generous than both its competitors.

This MSI-made version of the card arrives with three performance levels: for quiet operation, for gaming and for extreme performance, with different speeds available for each setting. Overclockers hasn’t stopped there, though; it has overclocked the card even further, so the core now runs at 1,240MHz and the memory at 1,903MHz – both far higher than stock.

That’s not the only tweaked component. The Core i7-6700K is a quad-core, Hyper-Threaded chip that usually runs at 4GHz, but here it’s overclocked to 4.6GHz. Neither rival can match that for sheer power: the PC Specialist runs its Core i5-6600K at its stock speed of 3.5GHz, and the Scan’s Core i7-6700 has a minor tweak that sees its Turbo clock rise from 4GHz to 4.09GHz. 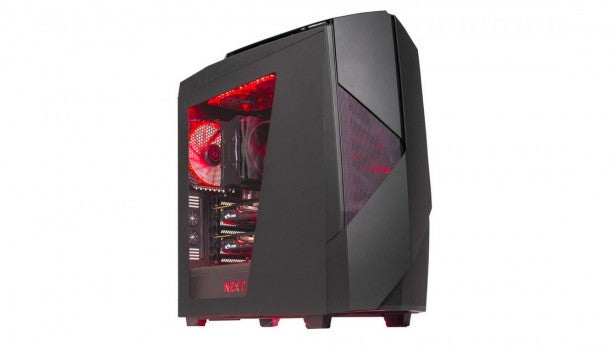 Elsewhere, the Titan Finesse Phoenix has a fairly conventional specification. Its 16GB of DDR4 memory clocks in at 3,000MHz, and its boot drive is a 128GB Samsung SM951 PCI-based SSD. There’s a 2TB hard disk for conventional storage.

I’ve already covered the upgrade room available on the Asus Z170 Pro Gaming motherboard, but it impresses elsewhere too. It has isolated audio circuitry to improve sound quality and guard against electrical interference, and its Gigabit Ethernet chip prioritises gaming traffic.

The backplate has four USB 3 ports and five audio jacks, alongside USB 3.1 Type-A and Type-C connectors. The board looks good too: its black PCB is augmented with smart heatsinks slashed with red and white, and a row of red LEDs sit beneath the model name. It’s missing only enthusiast features, such as on-board buttons and diagnostic displays.

It’s clearly a popular board, since Scan’s machine uses the Z170 Pro Gaming too. It also has far more going for it than the Asus Maximus VIII Impact in the PC Specialist – that board might be good-looking and have on-board buttons, but its mini-ITX form factor means it doesn’t offer any room to grow.