What is the Otone BluWall Direct?

The Otone BluWall Direct is a wireless speaker for use in your house, your garden, or maybe even one to take on your holidays.

Just want something for the home? Then the Sonos Play:1 offers better sound and more reliable wireless performance. However, with bass depth outshining almost all other wireless speakers at this price, the Otone BluWall Direct is a decent portable buy if you like your drum beats to sound balanced but deeper than the Pacific Ocean.

The BluWall Direct will set you back £179.99, which is a reasonable if not jaw-dropping price. 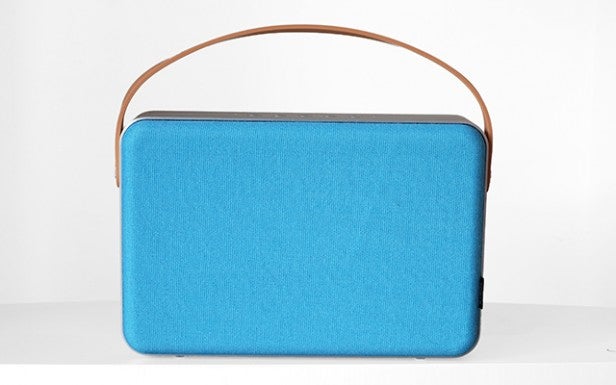 The Otone BluWall Direct could be seen as a cheaper version of the Bang & Olufsen Beolit 15, with some of that system’s class, but without the intimidating price tag that has put off so many.

It’s a compact, portable speaker, but more sizeable than similar offerings incorporating batteries. Design-wise, its killer features include its slimline form and hardy rubber carry handle. I’ve found the dimensions handy. While it looks big front-on, you can push it up against a wall or rest it on a fairly small table without worrying about it toppling over.

The finish of the unit is sensibly tailored to the budget. Both the front and rear of the Otone BluWall Direct is covered with coloured fabric, which fits perfectly around the unit’s friendly curves. Beneath it sits a plastic or light aluminum grille, rather than the ultra-hard metal ones you get in some speakers. 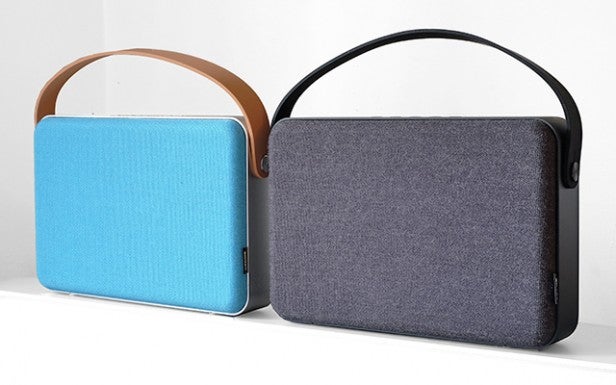 The use of fabric allows Otone to offer a number of different colour options. I’ve been checking out two, the black/dark grey and the blue/tan versions. Both have completely different personalities: the blue unit is summery, while I’d describe the black one as more moody.

It’s only on closer inspection that you become aware that the BluWall Direct offers only a hint of luxury. For example, the connections plate on the rear of the unit is plastic, and the handle is a basic length of rubber. It does the job well, but it’s far less flashy than the leather handle used in the similar B&O Beolit. However, remember that it’s less than half the price.

Between those fabric-covered front and back panels is a single-piece plate of aluminium that curves smoothly around the Otone BluWall Direct. This is real metal, feels great and has a brushed finish, but avoids any of the bevelling that might really bump up the manufacturing cost.

What I’m trying to get at here is that the BluWall Direct gets you a lifestyle-angled design but is still pretty pragmatic, keeping costs down. 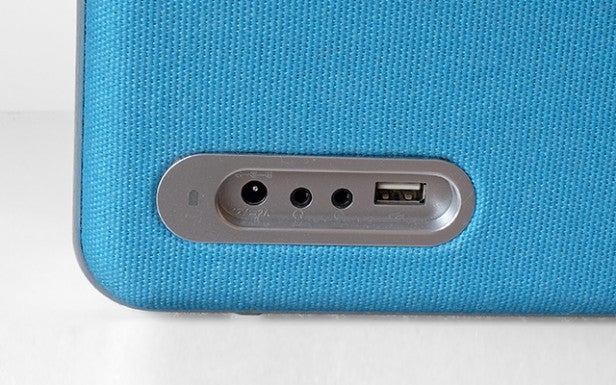 The features list is a crowd-pleaser too. There’s Bluetooth and Wi-Fi on the wireless side, plus a 3.5mm aux input and USB playback for those times when you just want a direct connection.

There’s even a 3.5mm headphone output, which can also be used to turn the Otone BluWall Direct into a wireless receiver for your old-fashioned hi-fi. Now that’s a neat extra for those with perfectly good non-wireless systems. Bluetooth works perfectly, and while there’s no NFC, pairing up is easy.

Controls on the top of the BluWall Direct enable you to change volume and tracks without having to mess around with your phone. 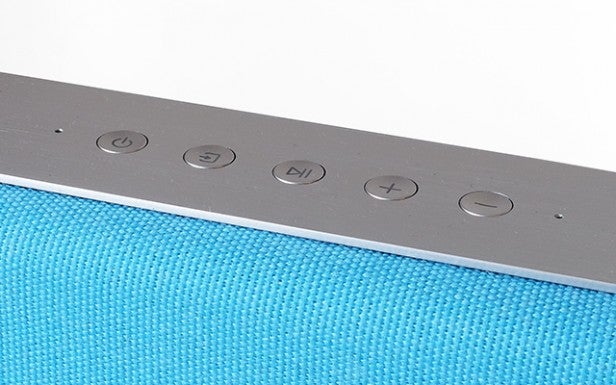 Switching between the Otone BluWall Direct’s modes is done manually, using a code system. The mode button has a tiny multi-colour LED that flicks through shades to let you know whether the speaker is using the aux input or Wi-Fi, and so on.

Ideally, you’d want the Otone BluWall Direct to do all this automatically – but you can’t have everything.

On the Wi-Fi side, Otone BluWall Direct’s killer feature is Spotify Connect, letting you pipe through music directly from the Spotify app. For Apple users, AirPlay is supported too.

This isn’t a speaker that locks you into using custom software, which is good news since BluWall’s app isn’t great. It’s laggy (I tested the Android version); one of the five services is actually a Chinese one (no idea which one – it’s in Chinese); and tapping the Spotify entry just takes you to the Spotify app. 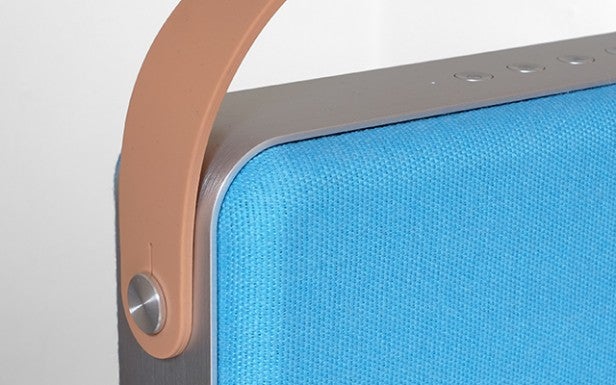 However, in order to unlock the Otone BluWall Direct’s most advanced features you’ll need to use its app.

These include multi-room and matching up two Direct speakers into a stereo pair. A list of available speakers will be visible in the app; you drag them onto each other to form a group. Each will show whether it’s outputting the left side of the stereo signal, the right or both. Depending on where the speakers are placed, you might get better results from just playing the full signal through each Direct speaker.

When the speakers are used in close proximity, though, it becomes clear that the pairing feature isn’t perfect. There’s a fractional delay between them. Although it’s only a few milliseconds, and not significant enough to create an odd “delay” effect, it’s sufficient to make the audio sound a little wrong – not too dissimilar (although not as bad) as an out-of-phase speaker.

For listening between a couple of rooms it’s fine – and with any luck BluWall will address the issue with a firmware update. After all, while you can’t necessarily get rid of transmission delay, you can introduce a matching delay in the original speaker. 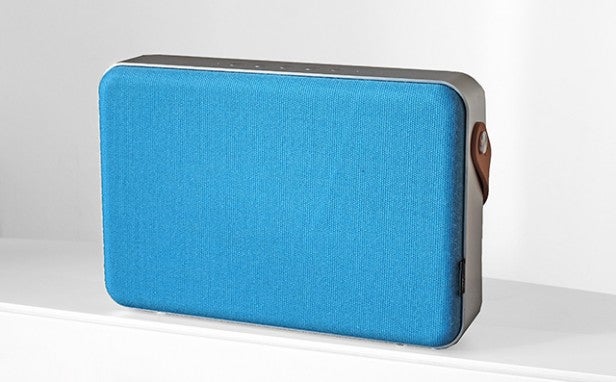 The Otone BluWall Direct’s sound makes up for these technical issues with three ways. First, this is a very clear-sounding speaker, with sparky but not harsh or sibilant treble.

Next, the Direct reaches impressively loud volumes  – at least over Wi-Fi. To the extent that the huge volume leaps that occur when streaming over Wi-Fi while using the buttons on your phone are a problem if you’re not careful. You can achieve much finer control using the on-screen volume slider, so this is no deal-breaker however.

Then there’s the bass. The Otone BluWall Direct is one of only a few speakers of this size that can actually reproduce an ultra-low frequency sub-bass. Many wireless portable speakers, even mid-sized ones similar to this, simply give up at a certain point because despite having powerful bass, their small drivers just aren’t capable of pushing out those super-low tones.

It’s deceptive too, because this isn’t a particularly bassy speaker. “Regular” bass frequencies are very much kept in check, making those moments when subwoofer-style waves start flowing out of the unit a real pleasant surprise. 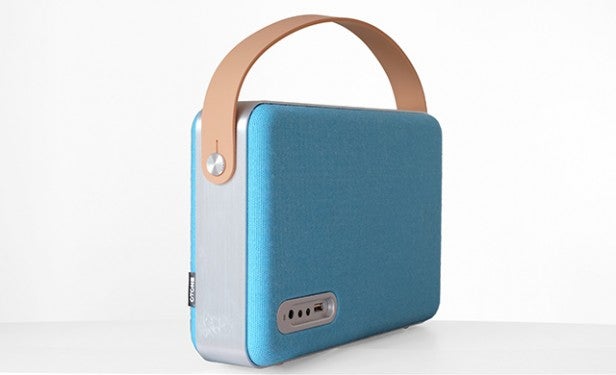 The BluWall manages this with two 2-inch drivers, one 3-inch driver and a 4.5-inch passive radiator.  The relationship between those last two must have been worked out carefully, because the bass is powerful and distortion-free.

There is a weak area, however. That the sound is so assured in certain areas, so flat-out loud compared with many Bluetooth speakers, highlights the fact that the Otone BluWall Direct struggles to deal with the mid-range as well.

Listening to the speaker alongside the Sonos Play:1, it’s clear that all its mid-range texture and detail comes from fairly high up the frequency range. The mids are where items such as guitar lines and vocals sit, and the BlueWall Direct’s inability to dole out the “meat” of the mid-range means they lack the weight necessary to stand out in the mix as intended.

This doesn’t mean the Otone BluWall Direct sounds clouded, far from it, but I do find those higher-register mids more tiring on the ear. And it means the otherwise good sound quality takes a bit of a hit in general.

Weighty mids are something Bluetooth speakers often struggle to deliver, because while the passive radiator enables a small speaker with small drivers to provide plenty of bass, there’s no similar tech to help the mids. If anything, passive radiators have seen the size of active drivers decrease. It also suggests the 3-inch driver is treated more as a “bass” unit than a full-range one.

Should you buy the Otone BluWall Direct

The sound issues would be a huge deal if this was a non-portable speaker such as the Sonos Play:1. I’d be advising you to look elsewhere. However, from the BluWall Direct it’s possible to get portable sound for up to six hours off a single charge, which will make it a great speaker for some – despite the complaints.

Its proprietary software is a little flaky, but Spotify Connect works well at home; when you’re about and about, the inclusion of Bluetooth means you have an ultra-accessible, super-loud and modern boombox that looks, feels and sounds great. What else could you ask for?

Typical of Otone, the speaker is fairly well priced; some bigger names such as Cambridge Audio or Bowers & Wilkins would be asking around £220-300 for a similar solution.

The BluWall Direct isn’t perfect then, but it’s a decent buy if portability is a key requirement.