What is the Denon Heos 5?


Heos 5 is Denon’s midrange multiroom speaker, sandwiched between the Heos 3 and top-end Heos 7. Smaller and more affordable than Heos 7, it’s designed for use in medium to large rooms.


Like its Heos brethren, it plays music from Spotify, Deezer, NAS drives and other networked devices via Wi-Fi, and thanks to the recent addition of a Bluetooth dongle you can play music from an even wider range of devices at no extra cost. 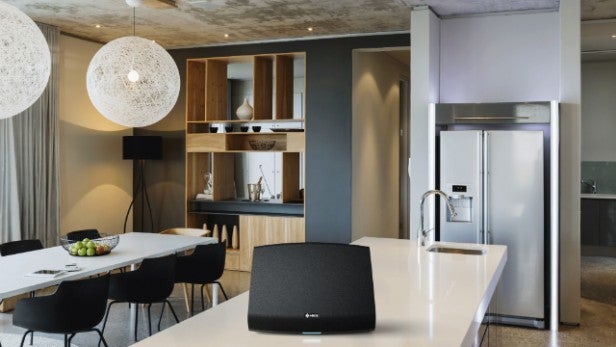 
The Heos 5 is roughly half the size of the Heos 7 and lacks the stylish brushed metal apex of the step-up model. But otherwise Heos 5 looks very similar, with black cloth hugging its teardrop-shaped enclosure and a funky blue light emanating from the base.


Denon has fitted the Heos 5 with a carry handle so you can easily cart it around, while one of the end panels sports chunky volume and mute buttons. The Heos 7’s headphone port is also missing.


Heos 5’s enclosure is weighty and robust, making it feel like a premium product despite its midrange billing. A rubber trim on the bottom provides a sturdy non-slip base. The side panels are plasticky but the silver/grey styling looks classy.


On the back you’ll find a 3.5mm minijack input, a USB port and an Ethernet port, a wired alternative to the built-in dual-band Wi-Fi. A button labelled Connect is used during the Wi-Fi setup procedure.


Invest in a few Heos speakers and you can send music to individual speakers or group a few together and play the same thing through them all. You can even retransmit music from the USB or analogue inputs to other speakers in the system.


Bluetooth support comes courtesy of a USB dongle, which Denon has recently started supplying for free, but it’s a shame this wasn’t integrated from day one like most similarly-priced speakers (plus it hogs the USB port). 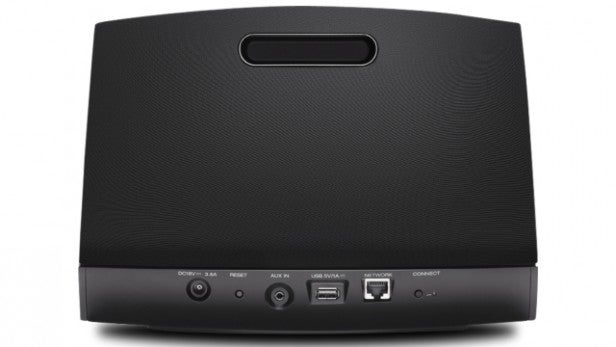 The Heos 5 speaker spec isn’t quite as impressive as the Heos 7, dropping down to a single passive radiator and losing the subwoofer entirely. There are four dedicated Class D amplifiers under the bonnet, which drive two mid-woofers and two tweeters.


To get Heos 5 up and running, you first need to install the Heos app on your phone and follow the onscreen instructions. Unusually, you have to connect your phone to Heos 5 using the supplied 3.5mm cable, which seems old fashioned but works fine. Adding further speakers involves finding the ‘Add Device’ option in the setup menu and going through the process again.


The Heos smartphone app has been explored in greater depth in reviews of the Heos 1 and 7, but in short it’s up there with the best (give or take one or two minor niggles). The attractive, uncomplicated layout makes navigation a breeze and it operates at impressive speed, whizzing through a 15,000-song music library without delay.


There are three tabs at the bottom of the screen – Rooms, Music and Now Playing. The Rooms tab displays all Heos speakers in the system, which can be grouped together by dragging and dropping the tiles onto each other. My multiroom system comprised a Heos 5, a couple of Heos 1s and a Heos 7, and I had no trouble grouping different combinations together and sending music to different zones. It’s a flexible, cooperative system. 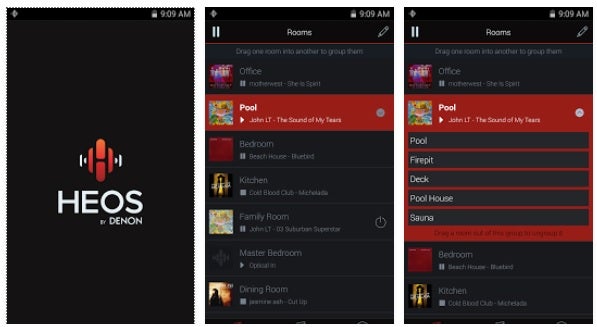 The Music tab displays all available streaming services and sources, while the Now Playing screen offers cover art, transport controls and a volume slider. The app saves every song you play in the playlist queue, unless you select the ‘Play Now & Replace Queue’ option when you play a track.


You have to remember to select the ‘Play Album’ option at the top of the screen if you want to play more than one song. You can’t just tap a track and expect it to play the next song in the album automatically. Also irritating is the lack of a time slider for skipping through a track quickly.


Spotify playback is conducted from the Spotify app itself, not the Heos app. Just tap the Spotify Connect logo and the Heos 5 should be listed in the ‘Devices Available’ menu.


With fewer speakers on board, Heos 5’s sound lacks the room-filling majesty of Heos 7, but it still delivers a powerful musical performance. It goes loud when required with minimal distortion and there’s a good balance across the frequencies.


Even without a subwoofer on board, bass is Heos 5’s greatest asset. Drums and basslines are conveyed with depth and punch, while vocals and keyboards are imbued with richness and warmth. Admittedly it can be a little overpowering at times but bass is rarely muddy or sluggish. 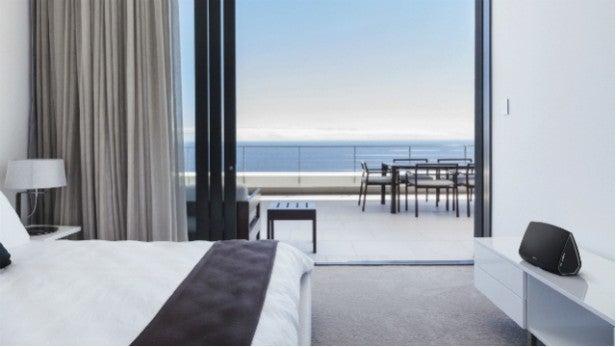 The full-bodied midrange makes big snare drums and guitar licks sound clear and forceful, while the crisp treble results in an open, detailed sound. Runnin’ by Visioneers has lots of subtle percussion shuffling away in the background and the Denon teases out every shaker and hi-hat. Meanwhile the delicate detail lacing the track’s flute licks and double bass makes them sound like real instruments.


I’m also impressed by the width of the soundstage given the speaker’s narrow dimensions, plus the surprisingly effective processing makes certain audio effects feel like they’re floating in the space around the speaker.


Heos 5’s sound is cohesive, dynamic and well-balanced, and you can’t ask for more than that from a midrange multiroom speaker. Perhaps bass could be dialled down a touch and the Heos 7 sounds bigger overall, but it would take a heart of stone not to be moved by the Denon’s impressive performance. 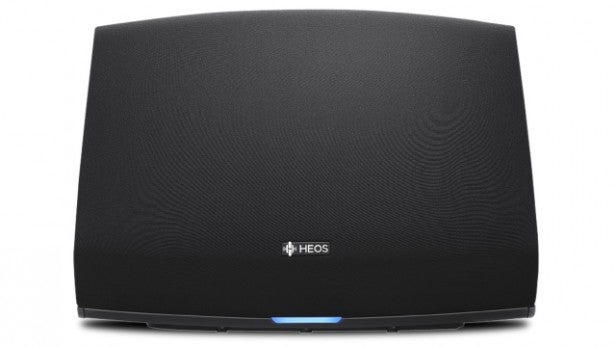 Should I buy the Denon Heos 5?


If you’re tempted by the idea of multiroom music and don’t want to go down the Sonos route, Denon puts forward a very convincing case for your cash. All of the models, from the portable Heos 1 up to the Heos 7, deliver hugely enjoyable sound quality, plus they’re easy to setup and operate using the terrific smartphone app.


Heos 5 is an impressive option for mid-sized rooms, offering more than enough power and punch despite its compact size. It backs it up with lots of detail, superb dynamics and rich, full-bodied bass. The stylish design and robust build quality are the icing on the cake.


The Heos system fares well against similarly priced rivals. Despite a couple of niggles, the Heos app is easier to work with than Samsung’s equivalent, which slows down when faced with a large music library. There isn’t much between the Heos 5 and Samsung R5 sonically, although Denon’s sound is beefier and slightly more detailed. On the other hand, Samsung’s speakers offer hi-res audio support, more streaming services and built-in Bluetooth so it has the upper hand on features.


Heos 5’s stylish design and killer sound quality cement Denon’s place at the multiroom top table, although the lack of hi-res audio is puzzling and the Heos app has room for improvement.