Introduction
The Onkyo ABX-N300 – or iOnly Stream to give it its funkier, Apple-esque name – is a stylish wireless music system with AirPlay, media server and internet radio support, not to mention a dock for iPods and iPhones. It’s a jack of all trades then, but what we want to know is whether it’s a master of them too.

Onkyo ABX-N300 Design
First things first, design wise the Onkyo ABX-N300 is a stunner. The bodywork is curved and glossy like all the prettiest systems, but its dominant feature is a sliding brushed aluminium panel on top that covers the dock and the illuminated display panel. It has to be slid manually but it moves smoothly and cleverly the LCD panel’s light turns off when covered up. The display panel is top mounted so you have to be standing over it to read it, and because it’s a little small the information feels a bit cramped, but at least the song titles scroll.

In front of the display on top is a long row of illuminated touch sensitive controls covering Menu navigation, playback, volume and source selection. The whole unit sits on a brushed aluminium base, which is only connected at the back and makes it look like the speaker is floating – an effect augmented by the subtle ambient light shining underneath. It’s classy little details like these that push the Onkyo ABX-N300 firmly into eye candy territory, but it’s all put together with a satisfying sense of robustness.

On the back is a short Wi-Fi antenna that can be folded down when not in use, below which is a recess that houses an Ethernet port and 3.5mm minijack input for external sources. There’s no USB port which rules out on the fly playback of tunes from flash drives, but with so many other ways of playing music we’re hoping it won’t be missed.

Onkyo ABX-N300 Features
The key feature of the Onkyo ABX-N300 is, of course, AirPlay which works with mobile Apple devices and iTunes running on a PC or Mac.What’s more, you can also play MP3, WMA, AAC and WAV files from Windows Media Player 11 or 12 and stream internet radio using vTuner. When you park an iPod or iPhone in the dock it charges, and you can control it using the Onkyo’s remote. Sadly for some, however, the Onkyo ABX-N300 features the classic 30-pin Apple dock connector meaning the speaker system is not compatible with the new iPhone 5 or 2012 iPod touch without the use of a pricey adaptor. It’s also a shame that Onkyo couldn’t have included DAB radio too but that might have been pushing it at this price. 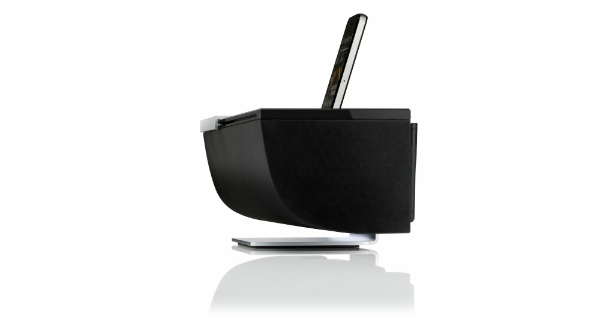 There are a couple of ways of tweaking the sound quality, including bass and treble control and an S.Bass mode that gives bottom end a boost. Onkyo’s proprietary Active Bass Control makes real-time adjustments to the low-frequency sounds to makes sure it stays in line with the playback volume.

You also get a range of useful stuff like shuffle and repeat modes, a snooze function, sleep timer and two programmable timers. On top of this, the Onkyo ABX-N300 also boasts two full-range bass reflex speakers inside that employ 6cm cones and are housed inside independent cabinets.

Onkyo ABX-N300 Operation
Using the Onkyo ABX-N300 isn’t the blissfully simple experience we were hoping for. This is due to the combination of a poor remote and the small display panel, which makes it difficult to move between menus and to enter text into password boxes. 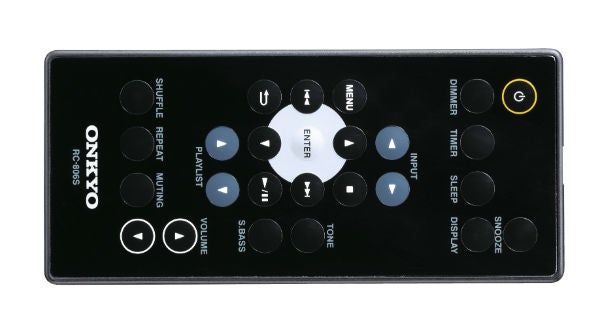 Unusually, you have to set up the unit before you’ve turned it on. Hit the Menu key while in standby and the LCD fires into life, offering a choice of Network Setup, Network Info and Standby Mode. In the Network Setup menu, you have to choose between Wireless and Ethernet. For the latter, it scans for access points and then moves to the password entry screen. Here, there are three pages of characters to choose from, each with three rows of letters or symbols, which only allows you to move left and right but not up and down between rows – hitting up or down flips to the next page. This is a frustrating experience.

There’s a Web Setup menu that makes life a lot easier, allowing you to make all the wireless settings in your PC’s internet browser. But the Onkyo ABX-N300 has to be connected to the network before you can view it, which means you need to connect via Ethernet first.

It also took a few attempts to get the Media Server feature to work but we got there in the end. Initially our Windows 7 laptop showed up in the list of servers but when we selected ‘Music’ the unit paused for a long time – that may be because it takes a while to sift through a large music library. However, when we played it from a Playlist the music loaded up with no hesitation.

AirPlay also worked a treat, streaming music with only the occasional drop out (usually caused by us faffing about with the settings) and we were able to enjoy internet radio for long periods without any hassle. The likes of the iPhone 4S and iPod nano charge and operate when placed on the dock as described, but the remote makes them more fiddly to control than many docks we’ve tested.

Onkyo ABX-N300 Performance
No matter which source you play it from, the Onkyo ABX-N300 is a pleasing performer with music. In general terms, the sound is bassy without sounding muddy, high-frequencies are crisp but not steely or brash and midrange elements are robustly delivered. The sound’s tightness and vigour makes for an exciting listen with dance and hip-hop music, and it’ll go fairly loud without straining. 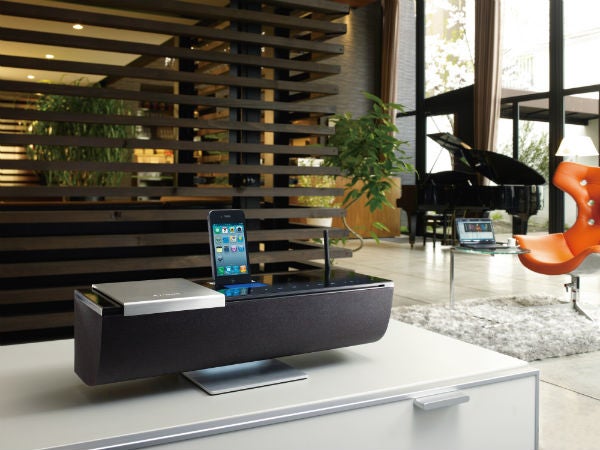 We tried mainstream fare from the likes of Adele, Amy Winehouse and Jack Johnson, and the acoustic guitars have a real-sounding twang and vocals are conveyed with decent depth and nuance. We had to play with the tone controls and turn S.Bass on before we were truly satisfied, but once tweaked the Onkyo ABX-N300 is capable of good things.

As pleasant as it is though, we can’t help but wish the sound was a little more open and finessed, which stops this matching the mesmerising performance we’ve come to expect from other Onkyo products. Sure, £300 was perhaps never going to deliver the ultimate in sonic perfection, but it’s these little drawbacks that prevent the Onkyo ABX-N300 being the all-round superstar we hoped it would be.

Onkyo ABX-N300 Verdict
The Onkyo ABX-N300 is an extremely stylish wireless system with true versatility, playing music from AirPlay devices, PCs, Macs, iPods, iPhones, internet radio and other sources via line-in. Audio quality is enjoyable but a lack of polish means systems like the Samsung DA-E750 are a better bet sonically. It’s also relatively tricky to setup and use, primarily due to the cheapo remote that makes menu navigation a clunky process. Still, with such incredible looks we’re sure it’ll win plenty of fans regardless.