What is the One For All SV 1760 Wireless HDMI Sender?

Judging by the number of times I’m asked about it, the The One For All SV 1760 solves one of the nation’s most pressing AV issues, allowining you to ‘beam’ audio and video wirelessly from an HDMI source in your main living room to a distant projector or a TV screen in another room. It’s a simple concept and there are some drawbacks, but for many households it’s a timely solution to an annoying problem.

One For All SV 1760 Wireless HDMI Sender – Design and Features

Despite having the Wireless HDMI Sender installed for a couple of weeks at the time of writing, I still find myself flip-flopping over whether I admire the business-like design or whether it’s actually just a bit dull. They look like tiny wireless routers with perforated holes spcing up an otherwise grey-and-black design. 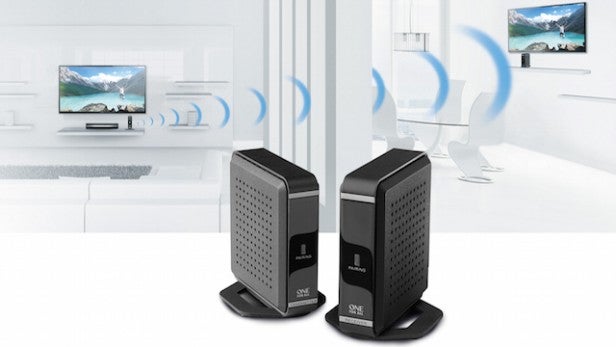 Thanks to their small size it’s pretty easy to hide them from view if you decide they’re not the ideal ornaments for your AV kit shelf or mantelpiece. You can lie them both flat if you wish, though they cut a more elegant profile if you slot them onto the little hexagonal feet One For All provides in the box.

The basic idea behind the One For All Wireless HDMI Sender is simple: to send full HD, even 3D video – with accompanying audio – wirelessly from an AV source or computer that has an HDMI output to another display device that has an HDMI input. It doesn’t support Ultra HD video, though, which could be a problem if you’re planning on upgrading to Ultra HD Blu-ray any time soon.

Scenarios where these could come in handy are include feeding a signal from a Blu-ray player at one end of a room to a projector at the other without having to worry about the usual long cable run, or sending a Sky receiver feed from the living room to a bedroom without having to use Sky’s clumsy wired solution or paying for a second-room subscription.

Of course, in the latter situation you won’t be able to watch one Sky channel in one room and another in the second room; both rooms will be restricted to watching the same content.

The One For All Wireless HDMI Sender uses the 5GHz frequency rather than the 2.4GHz frequency that tends to be used by the majority of older and cheaper Wi-Fi routers and cordless phone handsets. This should limit the potential for those other devices to interfere with the Wireless HDMI video signal. 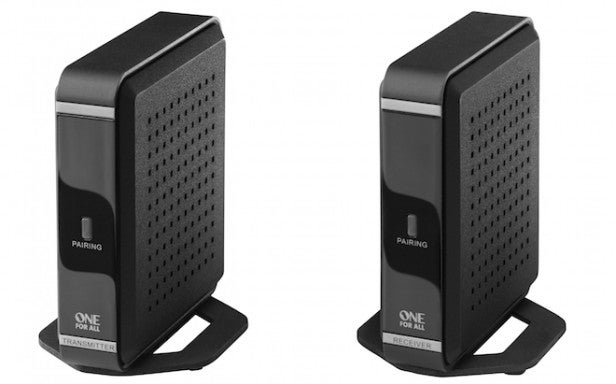 You also don’t have to worry about neighbours enjoying your wireless AV streams thanks to the Wireless HDMI Sender’s use of 128/256-bit AES security encryption.

One For All claims an effective range of 30m from the transmitter unit. This figure, though, depends on there not being any walls between the transmitter and receiver. Since the wireless transmission system doesn’t use infra-red (IR) technology it will work through walls; you’re not dependent on a direct line of sight. But introducing a wall or ceiling between the two parts of the system will undoubtedly significantly reduce the effective range. See the Performance section for more information.

While One For All has certainly made its units more svelte by installing their aerials internally, I do wonder whether this form-over-function decision might limit their effective range.

As you would expect from a wireless video system capable of running between rooms, the One For All SV 1760 also supports an IR return path so you can still control your source equipment with its remote control when you’re watching a screen in a different room. The IR receiver is handily designed to hang from your second screen’s bottom edge, hopefully in line with your remote, while the IR transmitter that relays the signal is a more standard little head unit designed to be stuck flat in front of the equipment you’re trying to control remotely.

One nice addition is that both the transmission and receiver units use MicroUSB ports, so you can power them using connected devices –such as a PC – rather than having to hook each unit up to its own separate mains supply.

One For All SV 1760 Wireless HDMI Sender – Setup

Setting up is simple, and works as you’d expect. Connect an HDMI cable from your source device to the transmitting box and connect another cable from the receiving box to your TV or projector. You can also use the HDMI output on the transmission unit to loop back to the screen that’s in the same room as your source device if you want to have the option of watching content on two screens. 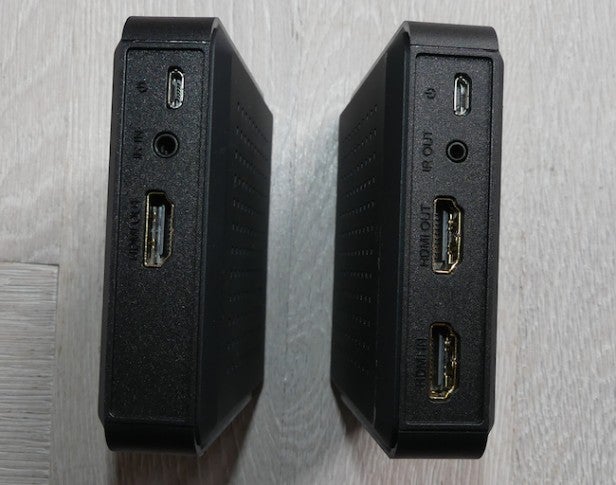 The IR part of the process is probably the most irritating. The little dongle that feeds IR signals on into your source equipment seems to have quite a narrow working range and required lots of tweaking before I managed to get it into a position where it consistently communicated with the source.

It could well be in this day and age, though, that you don’t even need to use the IR system to control your source gear from a second room. After all, many devices, from Blu-ray players to Sky boxes, now let you control them via your Wi-Fi system and apps on your phone or tablet.

One other niggle is that I found the both the stands and transmission/receiver boxes are a bit too light, meaning they could easily be pulled off shelves or window sills just by the weight of the cables attached to them.