One For All SV 1760 Wireless HDMI Sender – Performance

When it comes to picture and sound quality, the One For All Wireless HDMI Sender gets most things right, but is let down by a single aggravating flaw.

Starting with the good, pictures clearly contain every pixel present in a source, delivered with just as much sharpness and colour richness as you would see if the source was connected directly to the same screen.

What’s more, there’s no extra noise in the picture. The sort of fizzing, blocking, or sparkling problems sometimes seen with video sending systems are all entirely absent, as long as the receiver and transmitter are within comfortable range of each other. The image can freeze before the system – slightly sluggishly – tries to re-establish a connection if you push it right to the edge of its range comfort zone. Still, this is no more than you would expect of any digital transmission system. 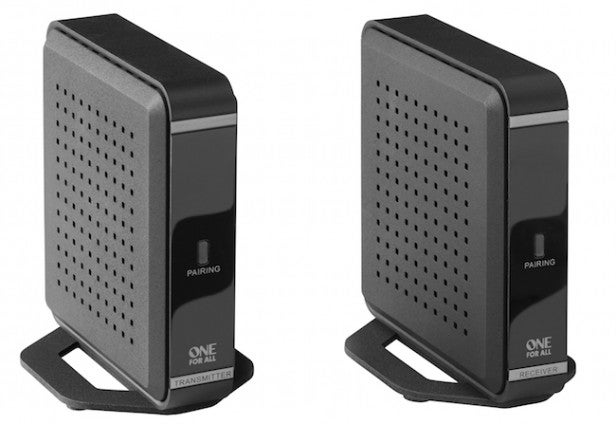 When it comes to audio, the system is capable of transmitting both PCM stereo and Dolby Digital 5.1 soundtracks, and both of these arrived at their destinations without interference or loss of quality.

Sadly, there’s one issue I couldn’t solve: judder. With both 50Hz and 24fps sources the SV 1760 causes the picture to stutter really quite noticeably  – far more than even a high quality TV’s motion smoothing processing will comfortably be able to deal with. Quick camera pans look particularly ugly, while content like the ticker text running along the bottom of a Sky News feed noticably choppy.

This issue occurs even if you have the receiver and transmitter sitting very comfortably within range of each other; it’s not something that only happens on the fringes of reception.

Aside from the quality of the images it transmits, probably the most important aspect of the One For All SV 1760’s performance for most people will be its effective range. I was happy to say that moving our second screen and the receiver unit around the house suggests One For All is pretty close with its 30m effective range claim when you’re talking about a direct line of sight. 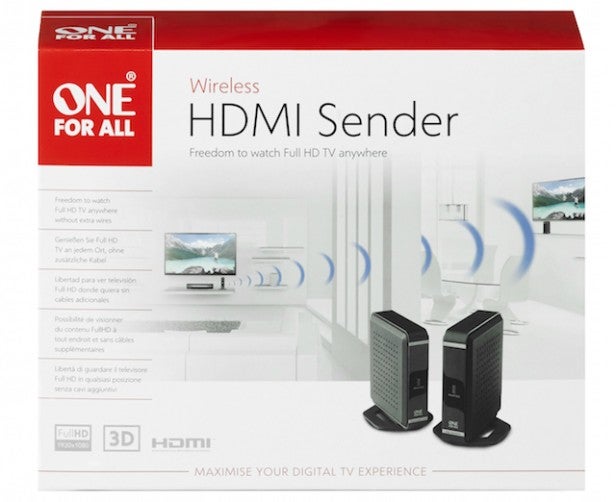 The range drops to a still respectable figure of between 10m and 12m if you have a room or ceiling to go through.

My tests suggest that going through two walls seemingly won’t be an option for all but the very tiniest of homes though this is no more than I would have expected, and One For All never tries to suggest in any of its materials on the SV 1760 that it’s good for double wall transmissions.

One last key aspect of the SV 1760’s performance that will be of critical importance to gamers is the amount of delay it introduces into the video signal. My tests reveal that the SV 1760 consistently adds between 35 and 40ms of delay as it transmits the images from your source to your projector or second-room screen.

This isn’t actually a bad result; I’ve seen other video transmission platforms routinely introduce almost twice that much delay. Still, given that you have to add the SV 1760’s 35-40ms to the lag being introduced by your display device, you could well be looking at a combined input lag in an SV 1760 system of 70ms or more (depending on the abilities of your display). This will prove a bit too high for serious gamers to feel comfortable with.

If you find the system struggling to work over a range you want to cover, try marginally adjusting the angles of the receiver and transmission boxes a bit at a time, ideally with you moving one box in one room while someone else moves the other box in the other room. This is because there is a degree of directionality in the way the units transmit and receive their signals, and from my experimentation getting the relative angles right can make quite a bit of difference to the signals’ range and robustness. 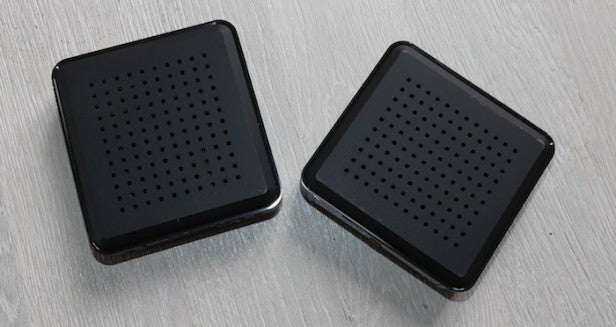 One other point to raise here is that while the SV 1760’s £200 price is pretty much in line with what you’d generally expect to pay for a decent quality wireless HDMI sender. It looks steep, but it doest at least serve its purpose for homes with a dire need for this sort of solution.

Should I buy a One For All SV 1760 Wireless HDMI Sender?

If your household would benefit from being able to send sound and vision between rooms or to a distant projector, then the One For All SV 1760 gets most things right. It delivers robust transmissions over a decent (if not spectacular) range, even through single walls or ceilings, and the system is easier to hide than most similar packages.

It also manages to retain full resolution and noiseless pictures throughout its wireless sending process. However, the picture quality is compromised quite significantly by judder, no matter what video source you’re using.

There are lots of things to like about the SV 1760 Wireless HDMI sender. It’s reasonably easy to set up and keep out of sight, it works over a reasonably useful range, and it keeps many aspects of your source’s sound and picture quality intact. Unfortunately, though, some fairly significant judder in its transmitted pictures stops me being able to give it a whole-hearted recommendation.

Previous
One For All SV 1760 Wireless HDMI Sender Review