Although the Shield Tablet K1
would be a perfectly adequate Android tablet for anyone, this device is
really built by gamers for gamers.

Like the previous model, the
Nvidia Shield Tablet K1 runs on the Tegra K1 GPU, which features the
same architecture Nvidia uses for its PC graphics cards. That means
you’re looking at a tablet GPU that supports all the systems used to
create PC games.

All the games found in the Nvidia Shield Hub are
Tegra-optimised, meaning they look better, run faster and take full
advantage of the hardware of the Nvidia Shield family and other tablets
with the same GPU – the Google Nexus 9, for example.

To really
get the most out of your Nvidia Shield, I’d recommend splashing out on
the Tegra-optimised titles. And there’s something for everyone. You’ll
come across  classic AAA games such as Portal 2 and Half-Life 2: Episode
1, through family friendly platformers such as Juju (one of my new
personal favourites), to other top-rated titles such as Minecraft:
Pocket Edition, Trine 2 and even the wonderful This War of Mine. 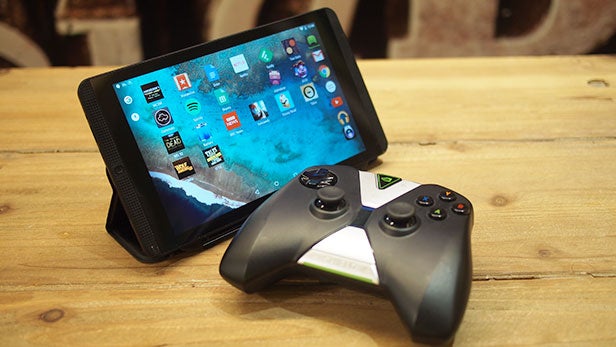 You’ll
be able to play the majority of these without a controller, but if
you’re willing to fork out for the official controller (£49.99) or a
cheaper Bluetooth option, you’ll get much more out of your Shield
Tablet.

With the addition of an HDMI to mini-HDMI cable, you’ll
even be able to connect your shiny new slate to your TV. Then, using
Mirror Mode, you’ll be able to view everything you see on your tablet on
the big screen.

Even better is Console Mode, which allows you
to turn off the Shield Tablet K1’s display and push it all to the big
screen. You’ll need the controller for this, but viewing all the
Tegra-optimised content on the big screen is certainly worth it.

This
tablet is also equipped with Nvidia’s new game-streaming service,
GeForce Now. It works in a similar way to services such as PlayStation
Now, but offers more of a PC gaming experience. 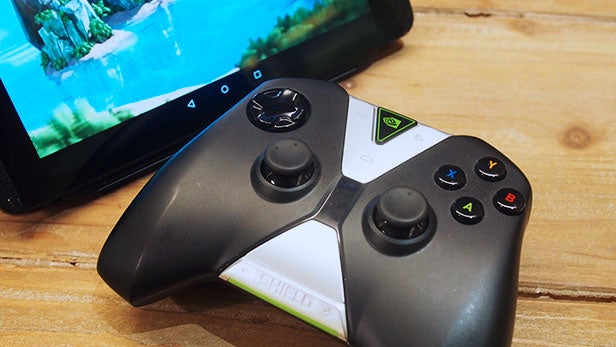 Sitting
within the Shield Hub menu, you’ll need to sign up for a membership in
order to access the service. But thankfully, anyone who signs up will
automatically receive a three-month trial. After that, it will cost
£7.49 a month to access GeForce Now.

The membership gives you
access to a growing selection of games that you can stream and play on
your Shield Tablet K1. My suggestions include The Vanishing of Ethan
Carter, The Witcher 2, Stacking, Brothers or any of the Batman Arkham
games (bar Knight, which isn’t currently available) to get you started.

There’s
also the option to “Buy & Instantly Play” a range of top-end PC
games. These require a one-off payment, similar to or cheaper than the
offer you’d find on Steam. What’s more, if you buy any of these titles,
they usually also include a free PC game code for the same title.

Games currently available through the one-off payment scheme include titles such as The Park – TrustedReviews’ Game of the Year 2015; The Witcher 3; Trine 3; and more.

Note
that you’ll need a healthy internet connection to take advantage.
Nvidia recommends 10Mbps just to get a connection; 20Mbps for 720p HD
quality at 60fps; and a whopping 50Mbps for 1080p Full HD 60fps quality.

In
practice, you won’t actually need 50Mbps for that highest quality and
buttery smooth frame rates. I managed to get 1080p Full HD at 30Mbps,
even while my housemate was surfing the internet on his laptop. As soon
as he started to watch Netflix, however, my game began to show signs of
stutter and lag, before dropping out entirely. 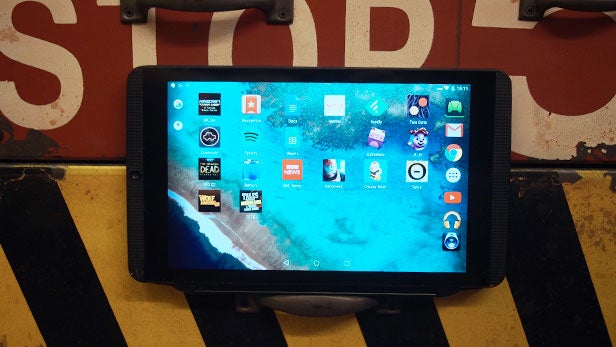 Now,
I’m still loathe to give any thought to the camera on a tablet; in my
opinion, anyone using a tablet camera to take photos should be given a
sharp rap on the knuckles. Nevertheless, there was I doing exactly what I
hate. 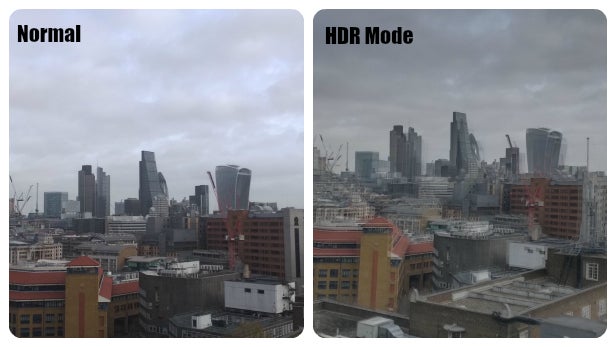 Using
HDR mode – a feature I covet on any smartphone – resulted in a blurred
image with the two layers standing defiantly apart from one another. You
have to hold the tablet extremely still to get a clear image.

Even
when I did manage this, the 5-megapixel rear camera failed to produce a
decent-quality image. The results were grainy with lacklustre colours –
although the grey London days may be partly to blame for that. 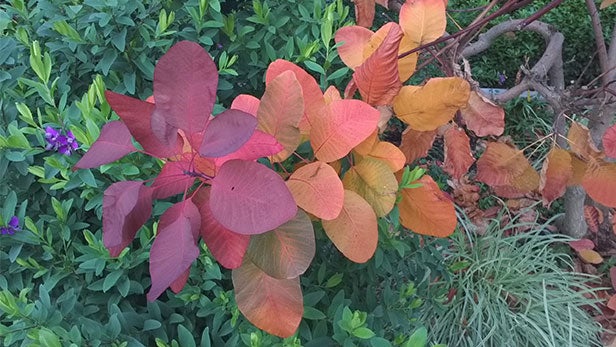 Even the autumn leaves on this tree aren’t as vibrant
Thankfully,
the majority won’t be using the Shield Tablet K1 for photography.
Instead, the front-camera is ideal for long Skype chats with far-flung
friends and family. 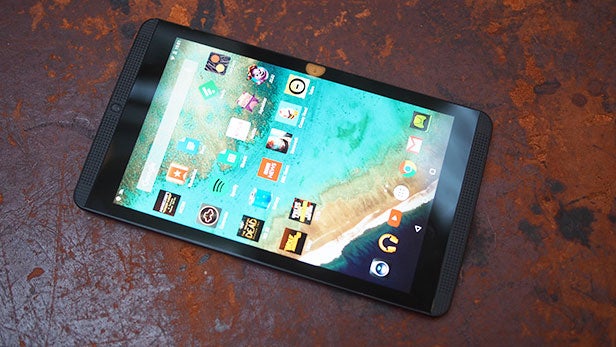 With
the same 19.75Wh lithium-ion battery as featured in Nvidia’s original
Shield tablet, you’re looking at a similar battery life to before.

The
company claims that you’ll achieve 10 hours of HD video playback; in
our tests it was closer to 8hrs 30mins for continuous video playback.

When
it comes to gaming, I went from 100% battery to 40% in two hours –
playing a combination of Juju with the controller connected, Xenowerk
and Tales from the Borderlands. This means you’ll get around three to four hours
of intensive gaming on a single charge, as you lose around 30% battery
per hour.

If you’re going to try GeForce Now, or are planning to utilise the
Console Mode, I’d recommended plugging the Nvidia Shield into the
mains to avoid any save game losses.

For video
playback, I lost only around 15% watching Netflix over Wi-Fi, and even
less while watching video content stored on the microSD card with Wi-Fi
turned off.

What’s more, we’re assuming that Nvidia has fixed
the battery issues that plagued last year’s Shield Tablet. But only time
will tell. 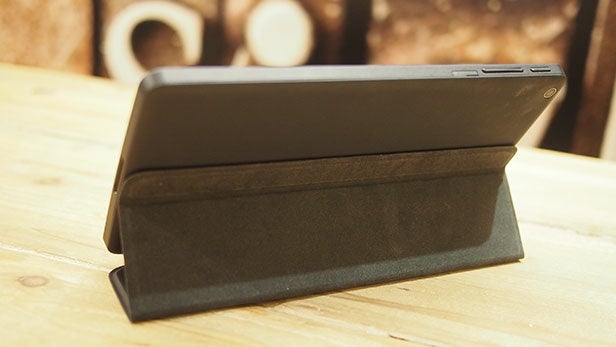 Should I buy the Nvidia Shield Tablet K1?

If
you’re looking for an affordable Android tablet that doesn’t skimp on
the hardware, design and functionality, then the Nvidia Shield Tablet K!
excels where others don’t.

The cheap Android slate market has
certainly taken a dip of late, especially with the excellent Hudl range
being discontinued. The Shield Tablet K1 is just the device to fill that gap.

What’s more, if you’re a gamer interested in seeing
exactly what you can do on a tablet then the Nvidia Shield Tablet K1 is
the only one worth buying. For £150, you’re getting the most powerful
gaming tablet on the market, alongside a glimpse at the future of game
streaming and the true potential of mobile gaming.

Even if
consider the added cost of the controller and the cover – £49.99 and £19.99
respectively – you’re still looking at a package that comes in just below
£220. This is considerably less than the next best thing, which is the iPad Mini 4 with prices from £319.

With the Shield Tablet K1, Nvidia
has done it again – producing an excellent mobile gaming device in the form of a powerful Android tablet. And all for the very
affordable price of £149.