The Netgear Nighthawk X8 R8500 is the current flagship 802.11ac router in Netgear’s lineup. Packing in three Wi-Fi bands, plus the latest MU-MIMO and quad-stream technology, it’s the fastest AC router the company has ever made.

It also includes a new active antenna technology for even greater speed and range, partial Smart Connect for easy Wi-Fi connection, plus it houses six gigabit Ethernet ports, two of which can be aggregated to form one 2Gbps link.

This is a big router. Measuring 316 x 264mm, it has one of the largest footprints of any router I’ve ever tested. It’s only 61mm tall, but that’s not including the 190mm of clearance needed for the antennae.

Gone are the aggressive, stealth-bomber lines of previous Nighthawk routers, replaced by a plain black rectangle with a wavy grille pattern on the top adorned, and a single blue highlight. Subtlety isn’t exactly the first word that comes to mind, though, thanks to the sheer size of the thing and the fact that each antenna has a glowing blue light on its tip.

Related: Best routers you can buy 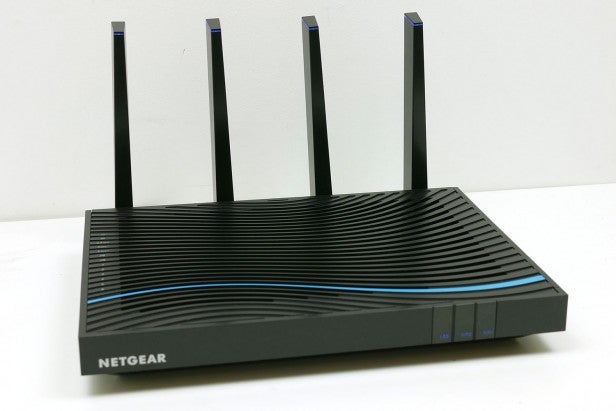 These are to signify that each antenna is active. Every antenna has its own amplifier inside it. This supposedly means each antenna can be better optimised for maximum power output and sensitivity, resulting in greater speed and range. They’re non-removable, though, so if they get broken, replacement isn’t an option. The router also has four more internal antennae.

One of the highlights is the inclusion of six gigabit Ethernet ports, with the option to connect two of them at once to the same client, making for one 2Gbps connection. The real world uses for such a connection outside of business are minimal, but it could be useful for those that have a powerful file server that is regularly accessed by multiple clients at once.

There are two USB ports, but it’s disappointing that only one of them supports USB 3.0. While it’s likely that most users won’t have the need to attach two high-speed storage devices to share files, it’s a shame that the option isn’t there. At least the USB 2.0 port is fine for printers.

Another disappointment is that they’re positioned on the side behind a fold down plastic flap. If you have a couple of devices more or less permanently attached, you have to leave that flap open all the time. You’ll also need to find extra room on either side of the router to allow for the cables to fit. Considering the already enormous size of this router, extra USB cables flapping around the side is quite the drawback. 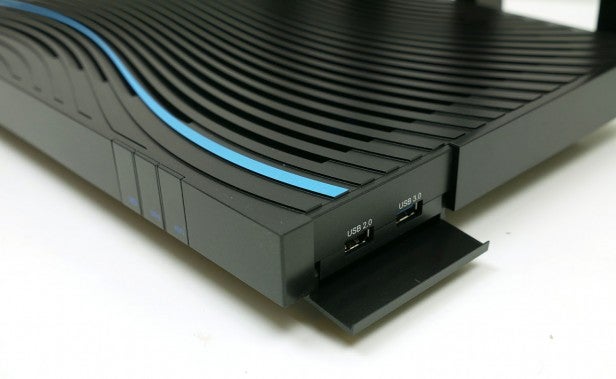 Still, Netgear’s sharing options are comprehensive and include the following:

Joining the Ethernet ports on the rear are the WAN Ethernet connection for connecting to your modem, a reset button, power button and the power input. It’s always good to see a power button as it means you don’t have to mess around trying to unplug and replug the power to turn the router off and on again, if and when it crashes.

Up front are the router’s only physical controls, consisting of three buttons for turning on/off the router’s LEDs and WiFi as well as setting off the WPS feature for quickly connecting devices to your WiFi.

It’s good there’s an option to turn off the LEDs as there are quite a few of them. You get one each for power, internet, each of the three WiFi bands, each of the two USB ports and all six of the Ethernet ports. Combined they do pump out quite a lot of light that would be distracting if your router is sat next to your TV. 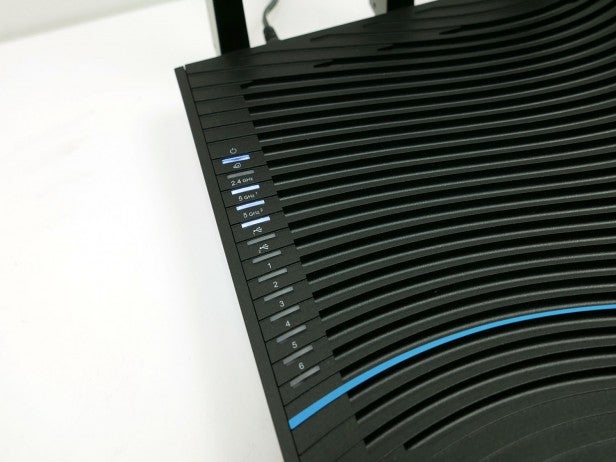 You also get quad stream, MU-MIMO for faster speeds when multiple devices are using the router heavily, and nitroQAM, which increases the throughput of each band. In other words, this router ticks every available box for making it as fast as possible for an AC WiFi router.

The one notable omission here is 802.11ad, as featured in the TP-Link AD7200 and the Netgear Nighthawk X10. It’s a brand new standard that uses a new 60GHz frequency band and it’s able to reach speeds of 4600Mbps. Its big limitation is range – it can’t even penetrate a single brick wall, making it mainly only useful for same-room applications like streaming from a laptop to a TV. In other words, it’s not something that you should desperately hold out for unless you have some very specific need for it.