Setting up the R8500 is relatively straightforward, with most things automated. Just plug in the right cables, restart your modem and you should be connected. If you want to go beyond using the default name and password for the WiFi and for logging into the router itself then it’s the usual procedure of heading to 192.168.1.1 or http://www.routerlogin.net to get to the router’s menu.

Netgear’s Nighthawk range is aimed at the more advanced user and this does show when it comes to the interface, particularly when compared to the far more friendly Netgear Orbi. It’s fairly utilitarian looking, and unlike many other routers you don’t get a network map to show what and where everything is connected. 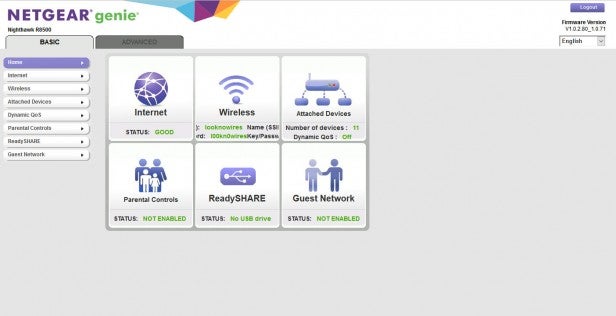 One of the more important features for non-enthusiast users is Smart Connect. This is where the router can combine its various Wi-Fi bands into one SSID (the network you see listed in your phone or laptop’s Wi-Fi settings menu) with the router choosing exactly which band to uses to communicate with each device you’re using. This means you don’t have to worry about changing which band to connect to depending on where you are in the house or what device you’re using. 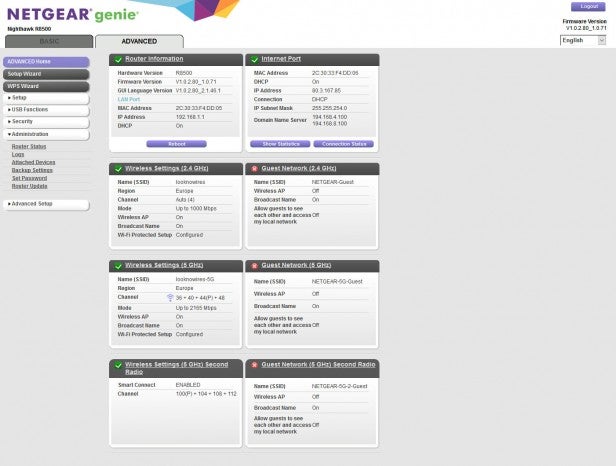 Unfortunately, the R8500 only has Smart Connect for the two 5GHz bands, and the 2.4GHz band remains separate. In some ways this does rather defeat the purpose of having Smart Connect since 2.4GHz has better coverage through walls than 5GHz, but it’s better than nothing.

The only other thing of note is Netgear’s software, which you’ll have to install on any PCs for accessing shared printers. It’s a lightweight bit of software that you can start and stop as needed, rather than it having to run all the time in the background.

To test the Netgear Nighthawk X8 R8500 it was setup in the front room of a two storey, three bedroom house where the phone line is. One laptop equipped with a gigabit Ethernet connection was connected directly to the router. A second laptop equipped with an AC1900 WiFi adapter was then connected to each of the WiFi bands in turn, and the speed between the two laptops measured.

Measurements were taken using LAN Speed Test, which uses a server app on one device and a receiver app on the other to test the raw network speed.

The Wi-Fi laptop was positioned at 2m from the router with direct line of sight, then at 5m with one brick wall in between it and the router, and then at 10m with two brick walls and a wooden floor in-between. In other words, in the same room, the next room and an upstairs room at the far side of the house.

So, how does the R8500 fare? Largely very well. Although it didn’t challenge for the crown of fastest at close range, the first of its two 5GHz bands was second only to the Asus RT-88U at distance, and comfortably beat the likes of the similarly priced TP-Link AD7200. 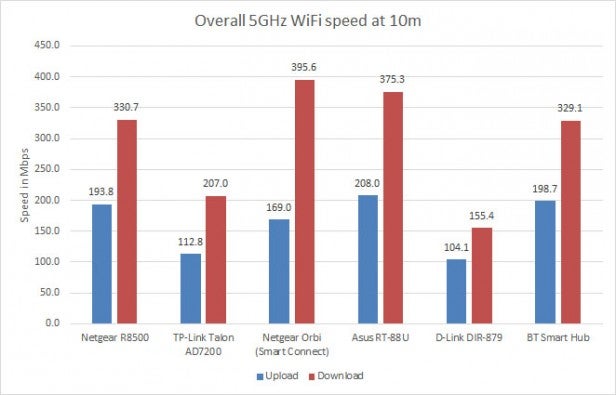 Its second 5GHz band wasn’t quite so impressive, which is actually something I’ve encountered a few times with tri-band routers. Then again, considering you’re still getting 253Mbps at 10m, it’s still an extremely capable piece of kit.

As for the 2.4GHz band, it struggled a little more, trailing the fastest by some margin, though it still comfortably beat many more basic 802.11ac units. 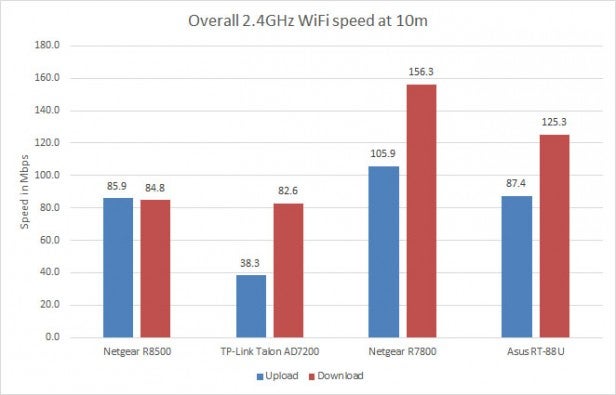 Switching Smart Connect on, we saw a little bit of a dip in performance compared to manually connecting to individual bands, but it’s very slight and is something seen on most other Smart Connect routers. In comparison, some routers like the aforementioned Asus RT-88U show a very marked dip when using Smart Connect.

Backing up that fast Wi-Fi is fast USB storage access. It’s not the fastest on test but it’s certainly fast enough that your Wi-Fi connection is more likely to be the bottleneck. 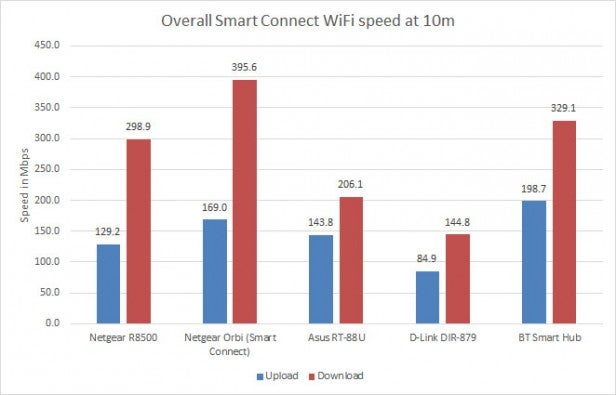 The router was also left installed for a week to ensure it remained stable under prolonged use, and sure enough it passed with flying colours.

I did note during testing is that this router is noticeably warm to the touch. All powerful routers of this type do get warm but here it was particularly striking – perhaps because the chassis is so slim that your hand is that much closer to all the hot electronics inside. Regardless, it’s a reminder that these things very definitely need to be kept in a well ventilated area and should be given the odd dusting once in a while to stop all those air vents from clogging up. 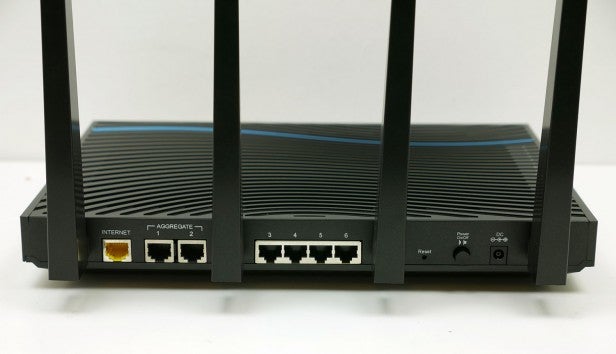 Should I buy the Netgear Nighthawk X8 R8500?

The R8500 is, to all intents and purposes, as fast an 802.11ac router as you can get. It’ll serve any large household or modest office very well. It trades top spot for performance with various of its tri-band competitors such that none definitively comes out on top, and there’s not too much to separate them when it comes to features either: the Asus RT-AC5300 has more software features but has only four Ethernet ports.

If you’re in the market for one of these routers, the R8500 is definitely worth considering.

As ever, the caveat with these high-end of routers is that few devices can take full advantage of the speed they offer. You should think carefully about exactly what your WiFi needs are. If WiFi range is the main problem you face then mesh-based router systems like the Netgear Orbi are a better way of getting everyone connected.

The Netgear Nighthawk X8 R8500 doesn’t re-write the rule book on Wi-Fi but it delivers masses of performance for a reasonably competitive price.