Well priced and with the ability to silence via app or the button, the Netatmo Smart Smoke Alarm makes fire protection easier.

What is the Netatmo Smart Smoke Alarm?

Despite being an essential part of home safety, most homes are stuck with dumb smoke alarms that go off at the slightest whiff of burnt toast. The Netatmo Smart Smoke Alarm, with its app-based control, aims to offer the protection you need, hassle-free.

In addition, it ships with a 10-year battery – after which, as is the recommendation for all smoke alarms, the entire unit should be replaced. Apple HomeKit integration rounds off the package and makes the Netatmo Smart Smoke Alarm stand out from its main rival, the Nest Protect.

A lower price than Nest may help seal the deal, although Nest Protect has a few more features and integrates more fully with your other smart home products.

The Netatmo Smart Smoke Alarm looks pretty much like a traditional smart smoke detector. Measuring 115 x 115 x 44mm, it’s a touch chunkier than some traditional models, but since you’ll mount it on a ceiling, this is unlikely to make much difference.

A mounting panel attaches to the ceiling, into which you screw in the main smoke detector. And that’s it, as far as installation goes. The unit is powered entirely by battery, which Netatmo says will last for 10 years based on normal use. As well as making installation easier, it means that you won’t have to listen out for a low-battery noise or clamber up ladders to change the cells. After the 10 years has elapsed, the unit should be replaced, which is true for all smoke alarms. You can install the Smart Smoke Alarm in practically every room, although it isn’t designed for use in kitchens. It’s generally recommended that you install smoke alarms in habitable rooms and hallways.

Once turned on, the Smart Smoke Alarm is configured using the Netatmo Security app, which is also used to control the Presence outdoor security camera.

Once in the app, there’s little that you can physically do with the device. It regularly runs self-checks to determine if its sensors are working and if there’s a Wi-Fi connection. Warnings are sent to the app if anything goes wrong.

From the app you can set monthly, biannual or annual prompts to run a sound check of the smoke alarm, too, which you do by pressing and holding the centre of the device. Annoyingly, the settings to change reminders or start a test aren’t in the Settings section of the app. Instead, you have to long-press your smoke alarm in the Security app. 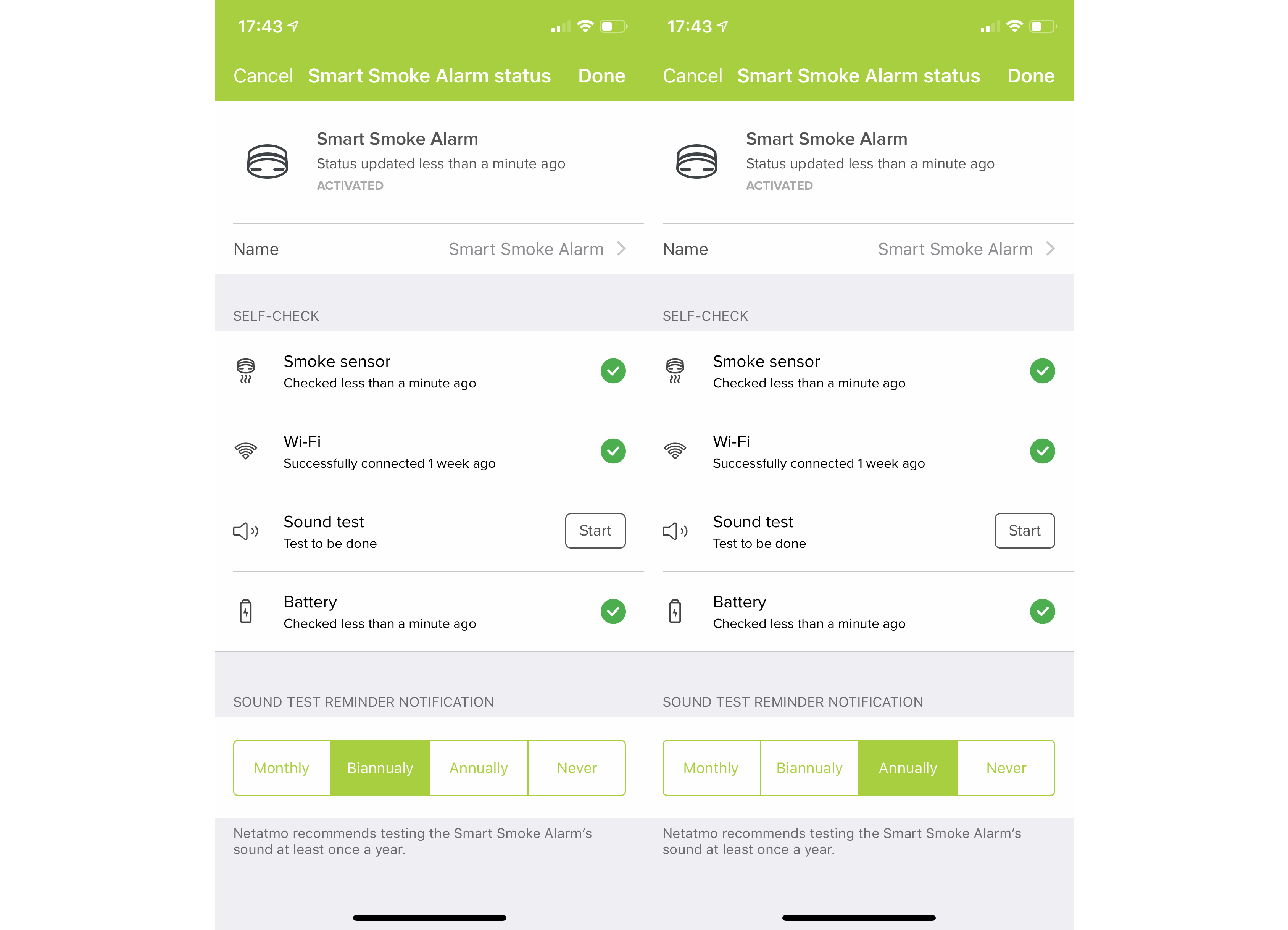 Sound checks appear in the app’s timeline. The Smart Smoke Alarm has the sensors to detect smoke but not carbon monoxide, unlike the Nest Protect.

Apple Home support makes the Netatmo Smart Smoke Alarm stand out from the competition. Once in the Apple Home app, the Smart Smoke Alarm acts as a sensor, which you can use in Automations. For example, if an alarm is triggered, you can automatically turn on your lights. You’re also sent notifications if the sensor picks up smoke. 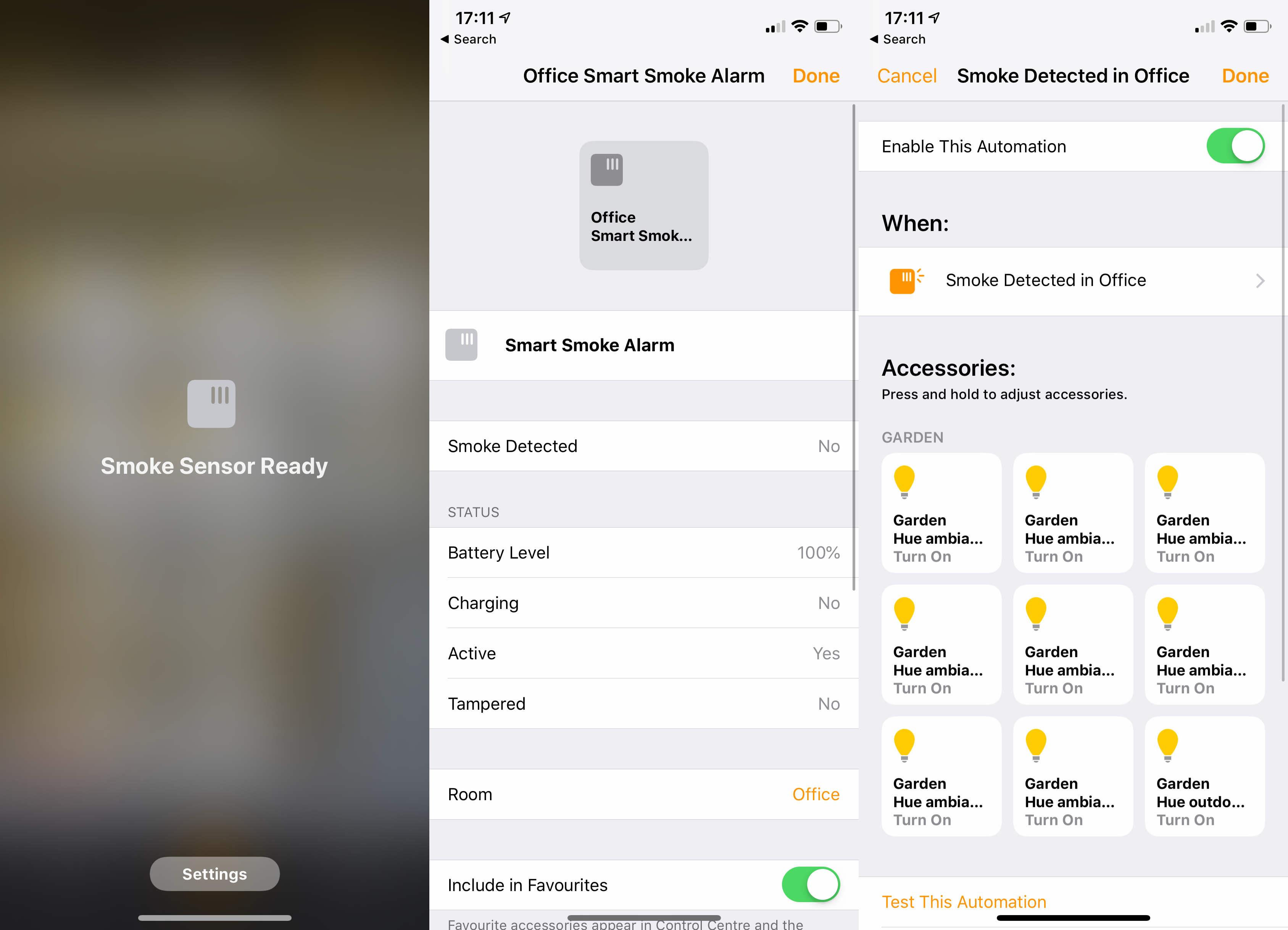 The IFTTT channel gives similar functionality, letting you control other devices when smoke is detected. There’s a Trigger for when smoke clears, too, so you can reset your other smart home devices.

I didn’t have the Smart Smoke Alarm go off by accident when it was placed in the corridor outside the kitchen, even with a bit of burnt toast. Using smoke detector testing spray, I set off the alarm immediately. Unlike Nest, there’s no grace period, where the alarm speaks to tell you that it’s discovered smoke before sounding the alarm.

Its piercing 85dB alarm is enough to grab attention, but it’s the notification in the app and Apple Home that provide the detail over what’s going on, so you can easily pinpoint the problem. Silencing the alarm by pressing at its centre or using the app is straightforward. Netatmo calls this Hushing, and it lasts for 15 minutes; if smoke hasn’t been cleared by then, the alarm sounds again. 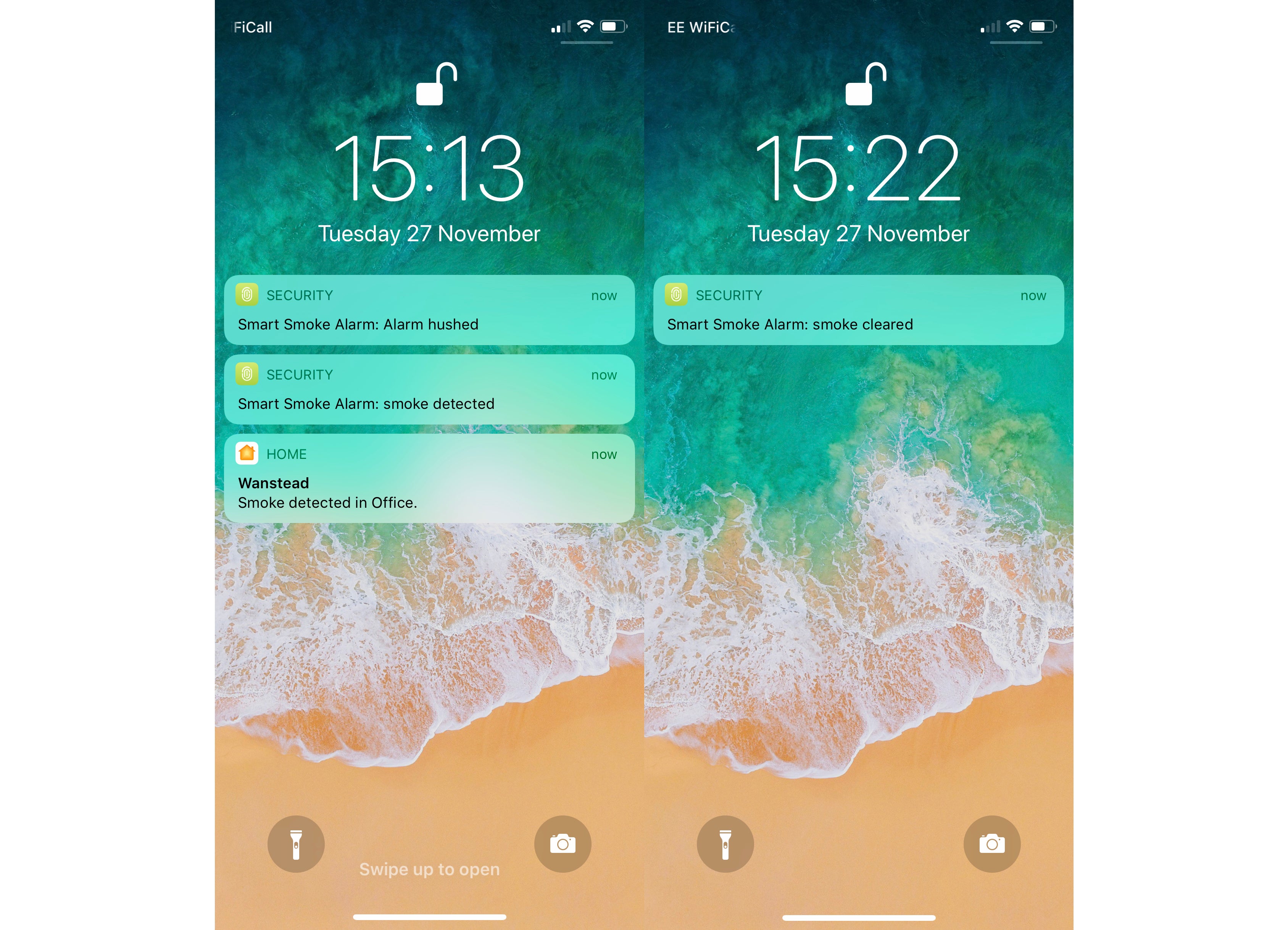 Neatly, you can put the alarm into Hush mode at any time. This can be handy if you’re about to start cooking something that usually sets the alarm off.

The Nest Protect can pick up carbon monoxide, has a greater number of features and plays better with your connected kit. The main downside is the price: £109 is a lot of money to spend on a smoke alarm, particularly when you need multiple devices.

The Netatmo Smart Smoke Alarm is almost £20 cheaper, a difference that adds up considerably when you’re decking out your entire house. It doesn’t quite have the same smarts, but it gets the basics right and it works with Apple HomeKit.