It’s been a while since the PS Vita
had a brand new and exclusive title launch, but this month sees
Murasaki Baby finally arrived for Sony’s handheld. Originally announced
at GamesCom a couple of years ago, Murasaki Baby has been incoming for a
very long time. But it’s definitely been worth the wait.

Murasaki
Baby is a strange game that sees you guide a lost little girl and her
vibrant purple heart balloon through a world make up of the stuff of
nightmares. She’s lost her mummy and it’s down to you to help Baby find
her.

We’ve been waiting for a great PS Vita exclusive since Tearaway
and Murasaki Baby is certainly in the runnings for one of the best Vita
games out there. Like Tearaway, it utilises the majority of the PS
Vita’s unique feature set, namely its touchscreen, rear touch panel and
its in-built gyroscope/accelerometer combo.

The
aim of the game is to take Baby by the hand and safely guide her
through each level, giving the nod to influence Ico. You’ll need to keep
Baby and her balloon intact through all the various hazard presented by
the nightmarish landscapes.

Murasaki Baby is split into
chapters. Within each chapter that you need to guide Baby through you’ll
encounter a new character who needs your help with a specific problem.
You’ll need to utilise the available backgrounds and a bit of problem
solving to aid them and get Baby to the next area.

We won’t spoil the story for you, as this is one of the game’s most compelling aspects.

The
characters are fully fleshed, even though they barely speak, and part
of Murasaki Baby’s charm is trying to work out their ailments and
predicaments. This especially applies to Baby herself. She’s scared and
alone, but weirdly curious about the slightly terrifying world around
her.

As you hold her hand and meet these different characters,
you’ll be required to interact with the occupants and scenery in order
to guide her to the next doorway. These doorways are the key to
progressing in Murasaki Baby, as they unlock the next part of the
chapter or the next one entirely as Baby rushes through them calling for
her mother. 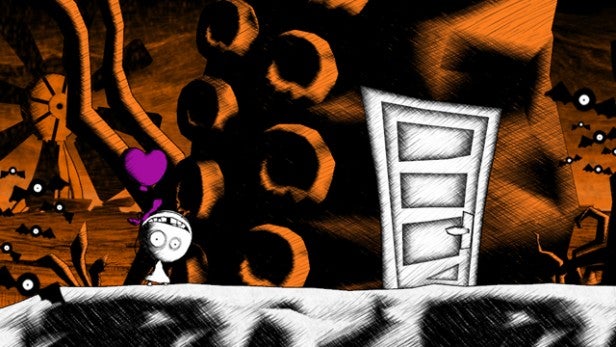 You
hold Baby’s hand literally by holding your finger down on the
touchscreen. Pull her hand in the direction you want to take her and she
will follow on behind. If you pull too hard, she’ll trip and fall, so
you need to have a little patience.

If she likes the location
she’s currently in, she’ll walk quite willingly. But if she’s scared,
she’ll walk much more reluctantly. This is all controlled by the
background currently on display.

As you progress through the
game, you’ll be offered multiple background to switch to with a swipe of
the rear touch pad. Each of these affect Baby differently and allow you
to interact with the world in a different way. One of the first is a
red background with boxes in it. If you tap the rear touch pad, Jack in
the Boxes will spring out and scare Baby and the monsters trying to get
at her. Later there’s a blue background that gives you the power of
electricity. By directing the current via the rear touch pad, you can
charge up moving platforms to get Baby to the next area. There’s even a
special purple background that lets you flip the entire world upside
down by literally flipping your PS Vita 180 degrees. 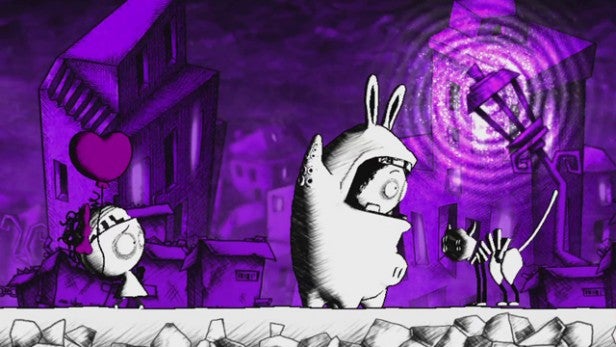 You’ll
need to work with these background to solve the puzzles presented to
you in Murasaki Baby. Often, they require switching quickly from
background to background, so you’ll need to be quick in manoeuvring your
fingers around the PS Vita.

At some points you’ll even need to
get multiple fingers in on the action on the touchscreen, keeping one
firmly on Baby’s hand and the other on the balloon as you divert it away
from electric beams, thorns and flying safety pins.

In that
way, Murasaki Baby utilises all aspects of the PS Vita’s features.
You’ll be scrolling through backgrounds with the rear touchpad and
looking after Baby with the touchscreen. You won’t be touching the
buttons or analogue sticks for the majority of the game, highlighting
the flexibility of the PS Vita’s hardware. 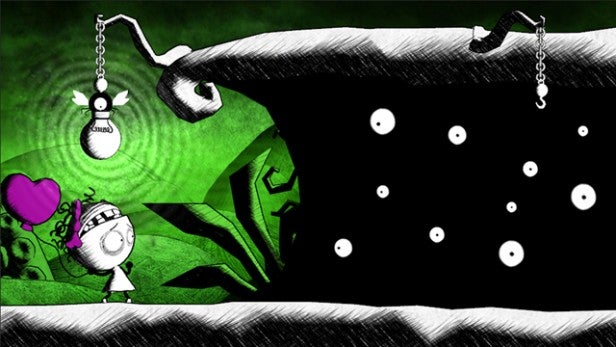 Murasaki
Baby excels with it’s strong storyline and innovative gameplay, both of
which make it a stand-out title for the PS Vita. There’s even a great, eerie soundtrack with unique sound effects to take you deep into the Murasaki world. Developer Ovosonico
might not have the developer credentials of Media Molecule, but the
studio is proving that there can be unique and compelling titles for the
PS Vita.

There’s a catch though. Murasaki Baby is a fairly
reasonable £7.99 purchase, but for that price you’re only getting around
two hours of play time. The storyline and gameplay are well worth the
investment, but we felt a like it ended far too quickly when the credits
started rolling. It’s a great game, but we want more of it.

There’s
no incentive to go back to your favourite bits either. Once you’ve sat
through the (lengthy) credits sequence, there’s no option to revisit
specific chapters. Instead you are only given the option to play through
the whole game again, losing your original save entirely.

Verdict
Murasaki
Baby is a fantastic game that really demonstrates the PS Vita’s
features, nearly as well as Tearaway does. There’s a rich storyline,
clever gameplay features and the artwork is quirky and appealing.
However, it’s sub 2 hour length does Murasaki Baby a disservice. By the
time you reach the end, you’re just getting into how the world can be
manipulated.

Murasaki is worth the experience if you’re willing to fork out £8 for a couple of hours gameplay.