The
hardware has been cut down a little to squeeze the chips inside
laptops, but each GTX 980M still has 1,536 stream processors clocked to
1,038MHz – only a little behind the GTX 970, from the desktop range.

In
other areas, each GTX 980M outstrips most of Nvidia’s desktop cards.
Each GTX 980M has 8GB of memory, which is double the amount of the
desktop GTX 980. That means there’s a dedicated 16GB of graphics memory (although as with all SLI systems, only 8GB can be addressed at once). 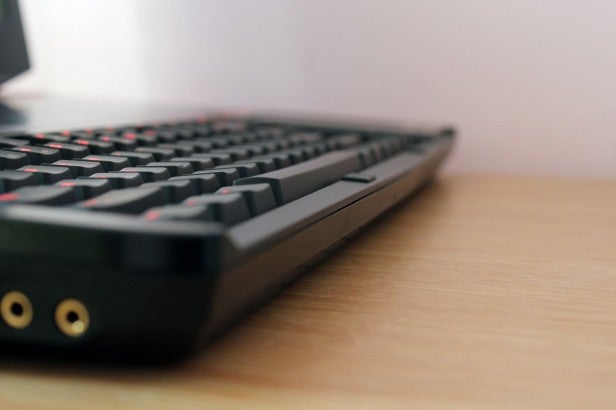 The
monster GPUs have a devastating effect on our benchmarks. Fire Strike
is 3D Mark’s toughest test, but the MSI scored 13,552 points. The MSI’s
nearest rival, the Schenker XMG U505, could only score 8,302 points. The
GT80 was even more impressive in Unigine Heaven’s Extreme 1080p test,
where its average framerate of 87.7fps was forty frames ahead of the
U505.

The insane benchmark results translated to real-world
performance. In Battlefield 4 at 1080p the MSI averaged 118fps, which is
streets ahead of the Schenker’s 64fps pace, and in Crysis 3 the GT80
averaged 104fps. In that test the U505 scored a lowly 58fps.

The GT80 is, quite simply, the fastest gaming notebook we’ve ever reviewed.

Its
processor is no slouch, either. The Core i7-4980HQ is Intel’s top
mobile Core i7 part, which means it’s got four cores, a 2.8GHz clock and
a mighty 4GHz Turbo Boost speed. It’s paired with 32GB of memory – the
most we’ve ever seen in a laptop. The MSI tore its way through the PC
Mark 7 test to a table-topping score of 6,808, and its Geekbench 3
result of 14,626 is similarly dominant.

The boot drive is formed
by a quartet of 256GB Toshiba HG6 M.2 SSDs in RAID 0. That provides a
formatted capacity of 952GB, but be aware of a lack of security –
there’s no mirrored data, like with RAID 1 so any failure will result in complete data loss. Elsewhere, there’s a 1TB
hard disk.

The four SSDs provide stupendous pace, with results of
1,507MB/s and 1,095MB/s in our sequential read and write tests. That’s
better than the Schenker and every other machine we’ve mentioned here,
and it means games on the SSD array will load rapidly, to say the least.

Slimmer
gaming laptops struggle with heat dissipation and noise, but the GT80’s
gigantic chassis helped it cope well despite the monster components.

When
stress-tested on its own the processor topped out at 77 degrees, with
the graphics cores four degrees chillier. When both parts were tested
simultaneously, they reached 89 degrees and 84 degrees – hotter, but no
cause for concern.

The noise wasn’t anything to worry about,
either. The GT80’s fans did spin up during intense games, but it’s not
enough to prove distracting. It’s on a par with the noise churned out by
larger gaming laptops like the Alienware, and quieter than many slim,
cramped rivals.

The heat doesn’t make it through to the
exterior, either, so there’s no chance of uncomfortably hot plastics and
metals on your lap, and MSI even includes a button to ramp the fans up if
necessary.

The GT80’s eight-cell battery sees this otherwise-barnstorming machine fall into familiar gaming laptop territory when it comes to life away from a plug socket.

Our
standard test loops a web browsing and video-call simulation with the
screen at 40% brightness Here, the MSI lasted for two hours and three
minutes – less than the other MSI machine and the Gigabyte laptop, and
less than half the longevity of the Alienware 17.

When gaming the
situation isn’t much better, with the GT80 lasting a few minutes short
of an hour. If you want to play games, make sure you’re near a plug.