The MSI’s
Cherry-backed mechanical keyboard is streets ahead of other gaming
notebooks. The keys hammer down with huge speed and precision, and the
sheer size of the buttons and the laptop itself means there’s more
travel available than on any other gaming portable.

It’s more
satisfying to type using the GT80 than on any other gaming laptop, and
that’s not the only area where the MSI excels – the laptop comes with
five gold-coloured keys to replace the WASD cluster and the Escape
button, presumably for when a £3,500 laptop with a mechanical keyboard
just isn’t flashy enough. 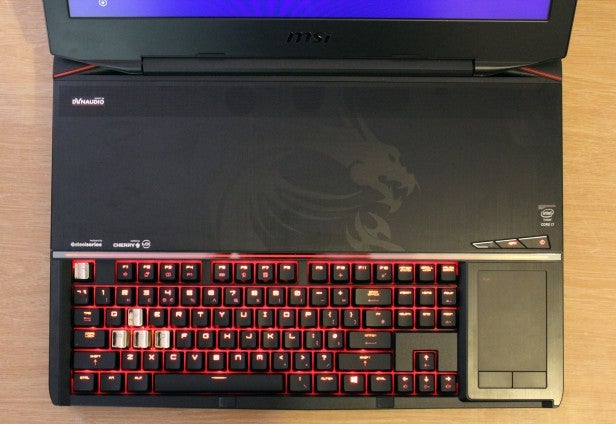 As
with the MSI GE62, we do have one fairly major gripe with the keyboard,
which is the layout. It uses a US-style one with single-height return
key, enlarged right shift and the Windows button is only on the
right-hand side. Some users may find they’ll get used to this but for
others – particularly if you’re flipping between a couple of differents
computers on a regular basis – it will be a regular annoyance. 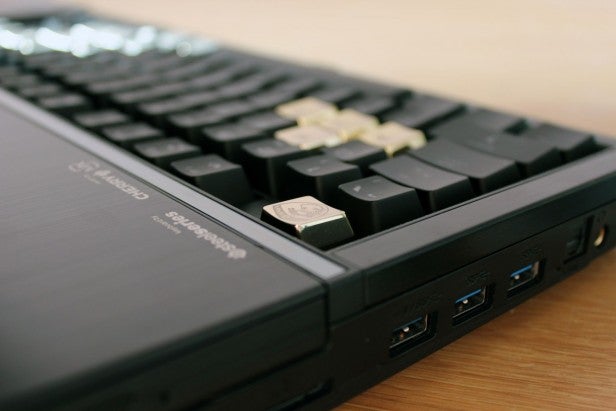 The huge
keyboard has shunted the trackpad to the right-hand side. This setup
mimics a desktop PC’s ergonomics, and the pad itself is far larger than many
gaming laptop equivalents – the size, and the smooth surface, makes it
easy to whizz around in games. 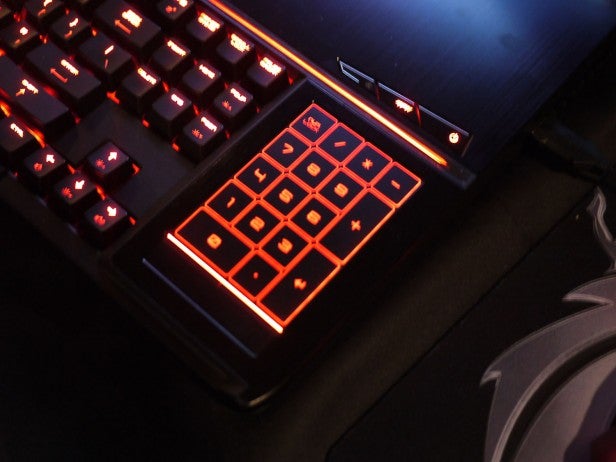 The
trackpad also has a neat trick up its sleeve. Tap a button just above
it and it converts the trackpad to an illuminated numpad. It’s a little
temperamental to switch modes but if you’re entering large volumes of
numerical data it’s a boon to have the numpad option there.

The
GT80 is ruinously expensive but, thankfully, MSI makes a couple of
cheaper SKUs. The 215UK has a slower Core i7 chip, one SSD, half as much
memory and two GTX 970 cards and costs £1,999, and the 215UK keeps the
two GTX 980M GPUs but has a more modest processor, 16GB of memory and a
single SSD.

When a machine is this bulky, though, it barely
functions as a laptop at all – and that means it’s worth comparing the
GT80 to desktop machines if you’re after something to lug to LAN
parties.

We put together a machine with a similar specification
to the MSI: a Core i7-4790K processor, 16GB of memory, a mini-ITX
motherboard, a 500GB Samsung 850 Evo SSD, 2TB hard disk and a Blu-ray
writer, and included a BitFenix Colossus Mini-ITX case. We then added a
mechanical keyboard, gaming mouse and Asus PG278Q gaming monitor, and
kitted the machine out with a trio of high-end graphics cards: Nvidia’s
GeForce GTX 980 and Titan X, and AMD’s Radeon R9 295X2.

all three alternative specifications were cheaper, with prices ranged
between £2,103 and £2,520. The storage isn’t quite as quick and there’s
“only” 16GB of memory, but those will have limited real-world impact,
and our desktops demonstrate a significant saving on MSI’s monster
laptop. 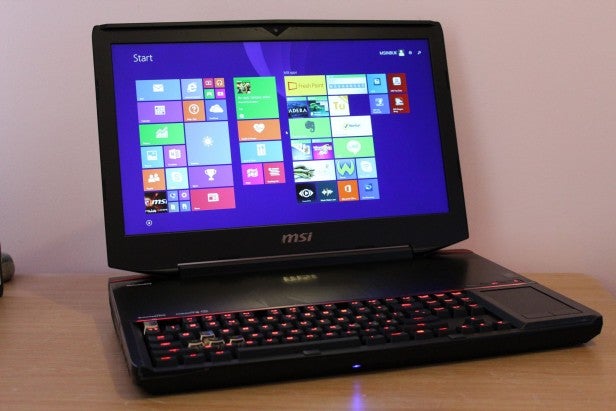 The
MSI GT80 thrives on excess. Its mechanical keyboard betters every other
gaming notebook’s typing surface, its pair of GPUs smash rivals, and
it’s got stonkingly fast storage, a swift processor and a huge, high-quality
screen.

The record-breaking power and innovative design comes
with downsides, though. It’s heavier and chunkier than almost anything on the
market, and its bank-breaking £3,500 price puts it out of reach of all
but the wealthiest of gamers.

There’s also the issue of how much
cheaper a desktop PC would be, particularly as the size of this machine
makes the ‘but you’re paying for the portability’ argument far less meaningful.

However,
with alternative SKUs offering still awesome performance and also
having that mechanical keyboard, for around £2,000, there are options
that make a bit more economic sense. And whichever way you spin it, a
4kg laptop is still far more portable than a PC, monitor, keyboard…

This
is the fastest gaming laptop
we’ve ever tested thanks to top-notch components in every department,
and its mechanical keyboard makes the typing experience better than
every competitor. It’s big and heavy, though, and painfully expensive.
Alternative configurations with the same chassis offer better value but
overall this is still an aspirational product for the privileged few –
the rest of us will have to make do with lugging our PCs round to LAN parties.

Not convinced by the GT80, or can’t afford its huge price? Check out our guide to picking the perfect gaming laptop, or explore our favourite games of 2015 so far.