MSI produces more
gaming laptops than virtually any other company, and its latest model, the GT80 TItan,
doesn’t just deploy high-end hardware – it’s also one of the most
innovative gaming portables we’ve seen.

It’s the first time we’ve
seen a gaming laptop with a mechanical keyboard, which should make this
machine a more satisfying typing tool than many rivals. It’s huge, too, thanks to its
18.4in screen.

The
inclusion of a mechanical keyboard is a clear nod to proper gaming PCs,
and that’s not the only area where the MSI takes inspiration from
desktops. The trackpad is to the right of the keyboard, and the 18.4in
screen is bigger than nearly all rivals.

The keyboard has good
pedigree: it’s made by peripheral experts SteelSeries and is built with
CherryMX Brown switches. They’re fast, tactile and quieter than the
firm’s blue, red, green or black switches, which is handy to avoid
annoying fellow gamers. 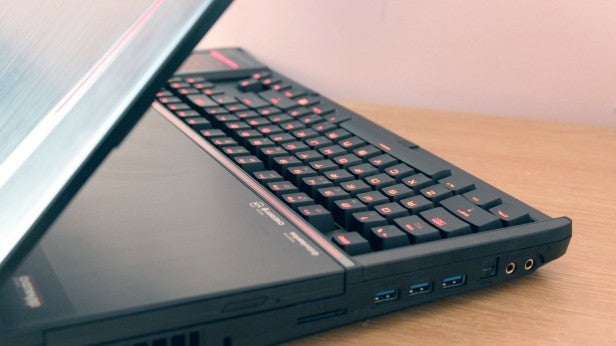 The MSI is a serious gaming system with
typically ostentatious design. The lid has MSI’s Dragon gaming logo and
sleek red lines, and the wide area above the keyboard is decorated with a
subtle MSI Dragon Gaming logo amid the brushed metal. Build quality as
good as you’d expect from a machine this size – it’s got to be strong enough simply to support its own weight, after all.

The
dimensions don’t mess about, either. It weighs 4.5kg and it’s 49mm
thick, which is so big MSI supplies a bespoke backpack for lugging the
GS80 to and from LAN parties. That’s a millimetre thicker and almost
half a kilo heavier than the Alienware 17. Considering the presence of a mechanical keyboard here that’s actually an impressively small margin.

This heft, though, is in direct opposition to recent trends, which have seen many gaming notebooks shrink. The Gigabyte Aorus X7 v2 weighs 3kg and is 24mm thick, while the MSI GS70 is just 21mm thick and weighs 2.66kg.

The
desktop-style experience is enhanced by additional accessories. As well
as the backpack you get a spongy wrist-rest to prop in front of the
laptop, and the WASD and Escape keys can be replaced by gold-effect
versions to add a bit of glamour. A mousemat is included, too.

The
base panel pulls away to reveal impressively substantial cooling gear. The processor
hunkers down beneath a heatpipe in the middle of the motherboard, and
the two graphics cores sit on either side, raised on daughterboards.
They’ve got heatpipes of their own, with separate cooling for their
memory chips. The pipes feed towards fans in the corners of the base. 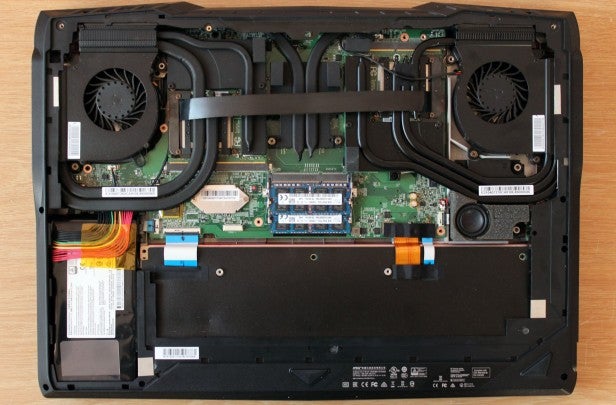 There’s
access to a pair of memory sockets but, as far as components goes,
that’s it – everything else is on the other side of the motherboard.
Despite the MSI’s size the deep keyboard cuts down on the interior
space, with systems like the Schenker XMG U505 and Alienware proving far more accessible.

Connectivity
is better. The edges serve up five USB 3.0 ports, which is more than we
see on most laptops, and there are two mini-DisplayPort outputs and an
HDMI 1.4 connector. The single audio jack is joined by an optical S/PDIF
connection. On the inside, wired and 802.11ac wireless connections come
from Killer, which is designed to prioritise gaming traffic – a boon
for competitive players.

The
18.4in matte screen has a 1,920 x 1,080 native resolution. While this is perfectly adequate, considering many 27in monitors still use it, if ever there were a laptop that deserves a higher resolution it’s this one. Not only does the sheer size of the screen mean that you can get away with a higher resolution without having to use the awful Windows scaling tools to make icons and text readable but also the monstrous power of this machine means it can easily play games at higher resolutions.

Resolution
debates aside, the display is good quality. It’s brighter
than every laptop screen we’ve so far mentioned and its black levels are good too – deeper than the Alienware and
Gigabyte machines, and not far behind the Schenker and MSI GS70. The result is a contrast measurement of 1,057:1, which is an improvement on the Alienware and Gigabyte
machines, barely behind the 1,059:1 of the other MSI notebook and only
falling significantly behind the XMG.

The upshot is there’s a real vibrancy and punch to the image. It doesn’t look washed out or muted. 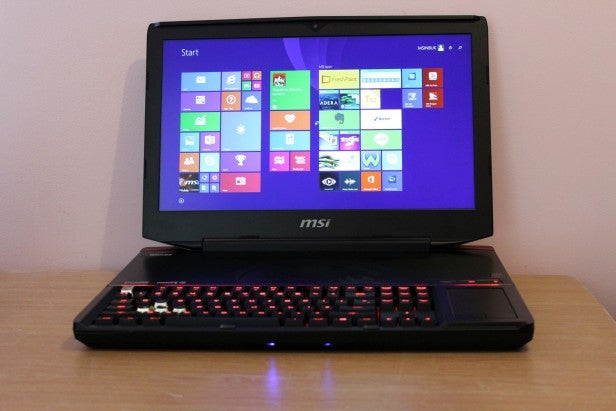 Colours are reasonably accurate too. Temperature is a little cool at 7,050K, but the Delta E of 2.91 is decent. That’s an improvement on three rivals,
with only the MSI GS70 proving superior.

It’s got
better colours, contrast and black levels than most of its key
competitors, which makes the GT80’s panel one of the best around. If
screen quality is vital, though, the MSI GS70 and XMG screens are
slightly better.

The 4.1 audio kit (a sub speaker sits underneath while the main speakers run along the top edge, behind the keyboard) is suitably beefy, with great bass
and a snappy top-end. It’s as good as the speakers on any other gaming
notebook, and you won’t be disappointed.