The Motorola Edge is a great phone, especially at the price. It feels like a true flagship and doesn’t really sacrifice much to reach the lower price. It’s fast, has a good camera, 5G and it’s one of the best looking phones around.

With its eye-catching design, 5G connectivity and mid-range price-tag, the Motorola Edge is an interesting prospect that proves the brand shouldn’t limit itself to making budget phones.

For years now Motorola has been bringing us excellent phones that cost south of £250. Now, with the Motorola Edge, it’s trying to offer a more high-end experience. The Edge is also joined by the Motorola Edge Plus, a phone it hopes will take on the likes of the Samsung Galaxy S20 Ultra and Oppo Find X2.

The Edge, on paper at least. looks impressive. But in aiming to hit a price-point that means it can’t include every feature going, does it end up feeling shortchanged? Or could this be our new best mid-range phone? Read on for our full review.

Design and screen – Is the Moto Edge’s curved screen more annoying than interesting?

I’m normally very dismissive of phones that go all-in on overly curved displays and considering quite how much of a steep curve the Motorola Edge has I was ready to hate it. But to my own surprise I found that I don’t completely despise the Edge’s. It’s not as ergonomic as a flat screen, but when it’s combined with the very narrow body it does work.

This is a long phone – it’s taller than the iPhone 11 Pro Max and a similar size to the Xperia 1 – but it’s a lot narrower than Apple’s flagship. It can still be comfortably held in one hand as a result.

But, many of the common issues with curved screens remain despite this. For example, accidental presses on the screen are all too common. Even when simply resting my palm on the sides webpages can unintentionally start scrolling up and down. The edges also catch the light a whole lot more than the front of the display, causing a lot of distracting reflections when you’re watching video in anything but a dark room. 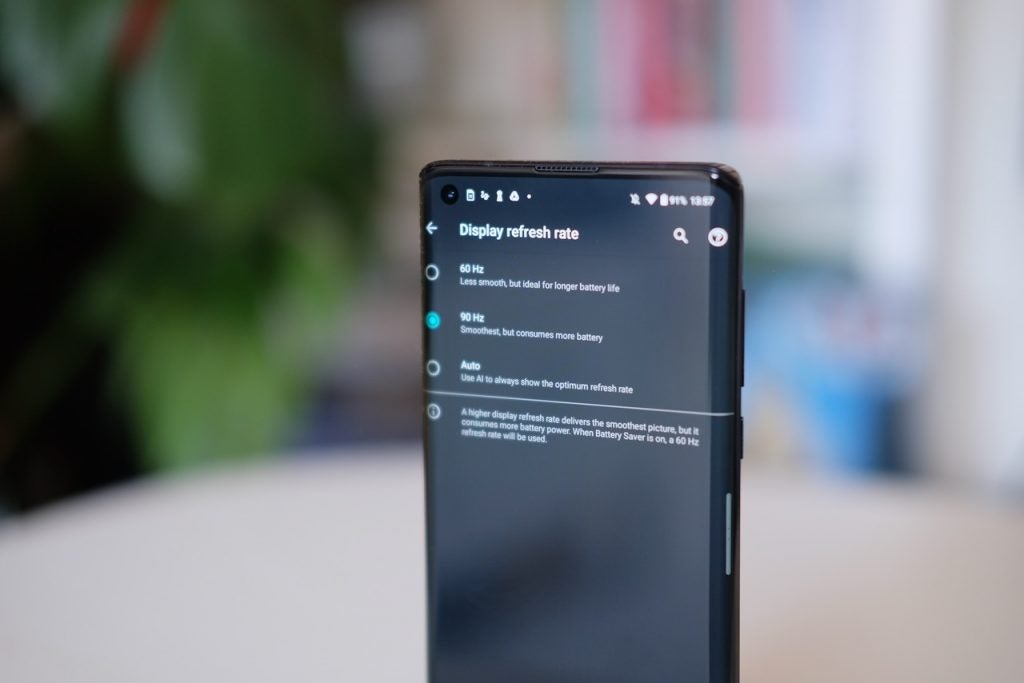 Motorola has added some software tweaks that aim to make use of the display edge. There’s a pop-up panel that gives you quick access to apps, while notifications can send colourful lights around the area where the display droops. You can also, if you want, force apps to ignore the sides completely and stick to just the front. This only works for a few certain apps and it doesn’t work on the homescreen meaning it’s not overly useful, but I did found the feature handy for apps that are focussed on reading.

The rest of the 6.7-inch display is actually very nice, not always a given for a phone that costs £549. You’ve got a bright OLED panel, with HDR 10 support. There’s also a front camera buried inside a small circular cutout. It might only be a 1080p display, but detail remains sharp and unless you’ve got a QHD+ phone to hand to compare I doubt you’ll really notice the difference. The best thing about the display though is the 90Hz refresh rate, which gives everything from scrolling to gaming a smooth finish. There is an option of an ‘Auto’ mode, which supposedly switches between 60 and 90Hz but I found this caused some odd drops when scrolling and I turned it off. I had issues with the optical fingerprint sensor not always recognising my thumb – although this is the case with just about all these still fairly terrible in-display fingerprint scanners.

Overall the Edge is a good looking phone, even if, screen aside, there’s little to really get excited about. The back is finished in a smudgy glass, while the top and bottom are flat. You’ll find the welcome addition of a headphone jack on the bottom, however there’s a distinct lack of any official IP rating. That’s far from a given at this price but it still would have been nice to have and it would have helped the Edge one-up the similarly-priced OnePlus 8. 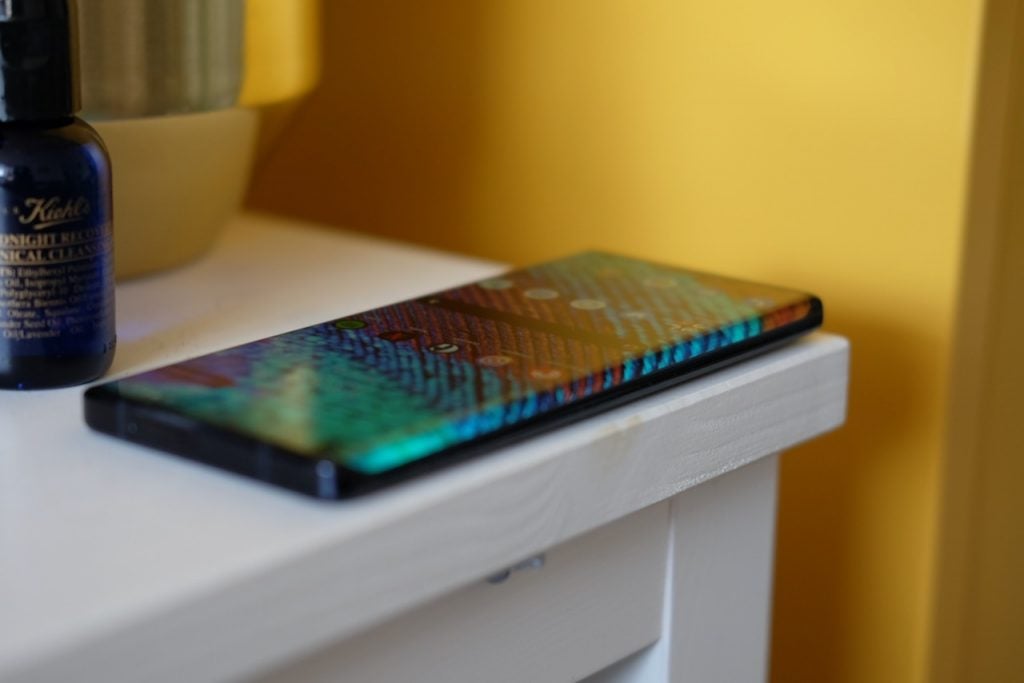 Performance – The Edge offers 5G for the masses

One of the biggest differences between this Edge and Edge Plus is the chipset used. Instead of the flagship Snapdragon 865, the Edge uses the Snapdragon 765G – Qualcomm’s current mid-range silicone.

Some might see this as a negative, but for me it makes the Edge more of an interesting proposition. This is one of the cheapest 5G phones you’ll find, but it still packs enough bite to keep things running smoothly in most situations.

It’s hard to notice any day-to-day tasks that feel slower than on a Snapdragon 865 device. Jumping between messaging and social apps, refreshing Instagram and opening up the camera are all done with ease and without any lag.

You’ll notice the difference a little more in certain games, especially if you’ve used an 865-powered phone before. Here games take a fraction longer to load than they do on handsets with the more premium chip. There is a difference, especially in titles that require of lot of horsepower, on what settings you can safely use, but it’s not enough to dismiss the Moto Edge as slow.

My review unit also packed 6GB RAM (though some markets might have a 4GB option) and 128GB onboard storage. You’ll find an expandable storage slot on the top, which can also handle a second SIM if you’d prefer.

Data speeds are also great, thanks to support for 5G networks in the UK and further afield. Unlike the US Moto Edge Plus, the regular Edge lacks the mmWave 5G support. Being stuck in lockdown has hampered my ability to test the 5G here in the real world – support for this still fairly new tech remains limited – but having it on a £500 device is impressive and futureproofs it for years to come. Of course if 5G isn’t supported in your area the phone will drop back down to 4G, 3G etc. 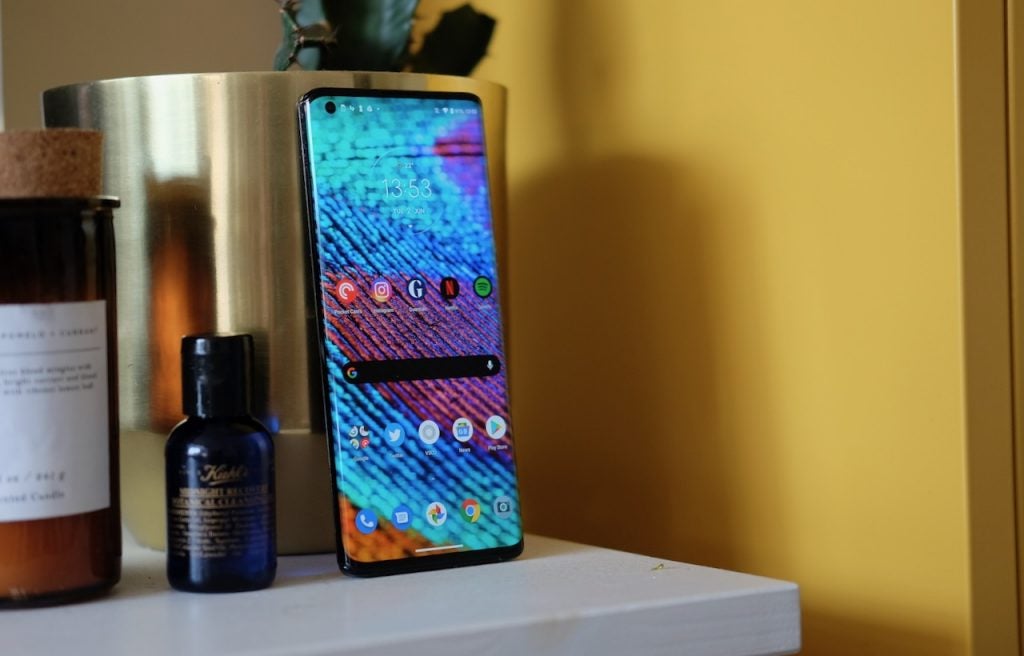 Camera hardware is a bigger differentiation between the Edge and Edge Plus. The Edge Plus’ more premium 108-megapixel main sensor has been ditched and the complimentary cameras downgraded, on paper at least, to help keep costs down.

The Motorola Edge still keeps plenty of camera tricks. There are three main cameras, plus a time of flight (ToF) sensor for extra bokeh skills, along with a 25-megapixel unit around the front.

What I have noticed the most about the using the Moto Edge, rather than a phone around the £1000 mark, is that while the main sensor takes very good snaps it’s the surrounding cameras that don’t stand out so well. The ultrawide and telephoto are both fine for adding a little variety to your shots and little else. In general they produce slightly blurry shots that are rarely much use.

Switch to the main 64-megapixel camera and the results are far superior. With something like the iPhone 11 Pro (obviously a far pricier phone) I would say I use all the cameras equally – here my shooting is restricted mostly to this main sensor.

While it might be capable of shooting pure 64-megapixel snaps, most of the time you’ll be taking 16-megapixel images. Daylight shots are good. Results are colourful and have decent dynamic range. The HDR effect also helps counter bright sunshine. As you’re essentially combining four pixels into one you’ll also get large amount of details, particularly noticeable in the bark of trees or on leaves. These images pop on social media.

As seems to be the case with most phones around this price that aren’t the Pixel 3a things fall apart a bit when the light isn’t very good. The Moto Edge has a dedicated night mode – Night Vision – that tries to enhance brightness when you’re shooting in dim conditions. It does an ok job though this isn’t the phone for you if you’re big into low-light shooting.

Video maxes out at 4K 30fps and wasn’t too impressive, same goes for the selfie camera.

Software – The Moto tweaks are welcome

Motorola has done a great job with the software on the Edge. It’s taken very much a ‘less is more’ approach, combining the majority of its added tweaks into one handy app and then keeping everything else very ‘Google’. There’s no heavy skin or duplicate apps taking up space.

This ‘Moto’ app is home to everything from layout customisations to gesture control. You can switch fonts, themes, change your wallpaper or even the animation that follows a press on the fingerprint sensor here.

Moto Actions have been great for years and they’ve remained standout features on the brand’s cheaper phones. A quick twist of your wrist, for instance, opens the camera, while picking up the phone when it’s ringing will silence the tone. 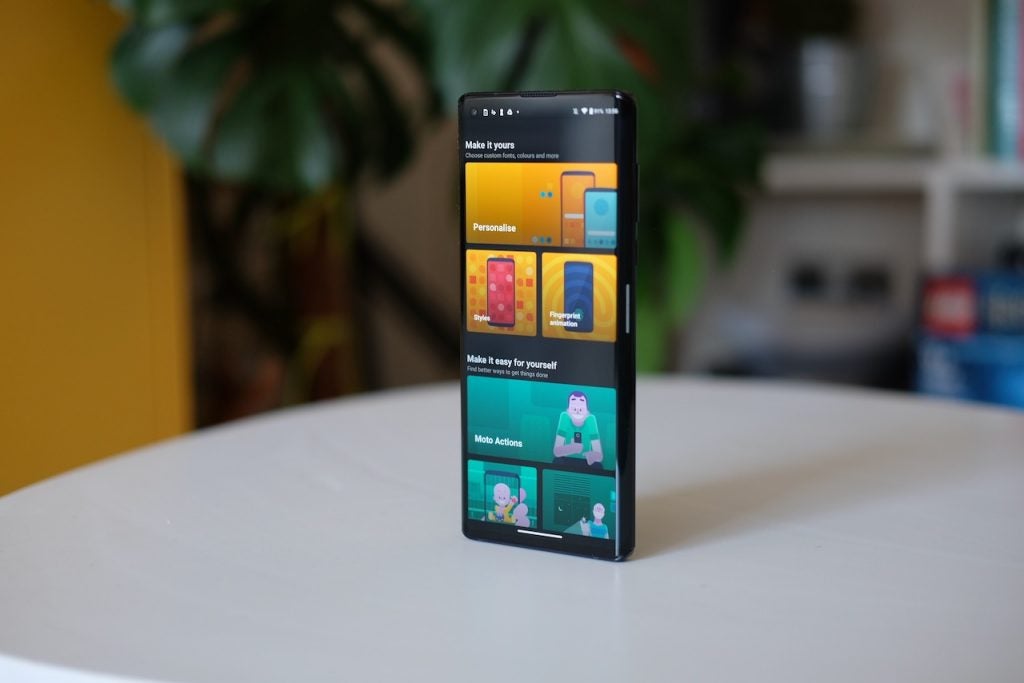 Another Moto stalwart is Moto Display and again you’ll find the options for this in the Moto app. Moto Display makes it easy to see notifications, even when the screen is off, and enables you to interact with them without unlocking the phone. It’s a small tweak, but one that quickly becomes very useful.

While the device is running Android 10, Moto reps said they’ll be one update for the Edge. Though this is, and hopefully will, be subject to change. Phones at this price point need to be supported for a lot longer.

Battery Life – Another winning feature of the Moto Edge

The Moto Edge offers users excellent battery life. The large 4500mAh cell combined with a power-efficient chipset ensures the Edge can comfortably make it through a busy day without needing a charge.

Throughout the review period, it regularly lasted around two days without charging, reaching around six hours of screen-on time. That’s with the 90Hz mode on and a 5G SIM installed – though usually just pulling 4G and Wi-Fi data.

I was less impressed with the charging speeds, even though Motorola brands it as ‘Turbo Power’. This seems to output 18w of power – the same as an iPhone 11 Pro – but with the big battery, it can take a while to fully juice up. There’s no wireless charging.

What is the Motorola Edge release date?

The phone was released in May 2020

This isn’t a waterproof phone, however Motorola says it has ‘water-repellent’ coating