It’s always a joy when a developer takes the ever popular FPS template and tries to be smart with it. Mothergunship does just that, and, better still, does it pretty well. Developed by Grip Digital and a spiritual sequel to 2015’s Tower of Guns, this is essentially an FPS mixed with a bullet hell shoot ‘em up that’s as inventive as it is mad.

The moment you start playing you’ll be thrown into battlefields with more projectiles coming toward your face than can easily be counted. But the bullets a move slower than you’re used to – it would be borderline impossible to play the game otherwise – and the end result is a game that forces you to balance precision gunplay with expert platforming.

If you can’t blast enemies away while dodging the barrage of bullets heading in your direction you’re going to die. Learning how to do both is half the fun, but also where frustration lies. The further you get into the experience, the more crazy this is all gets. 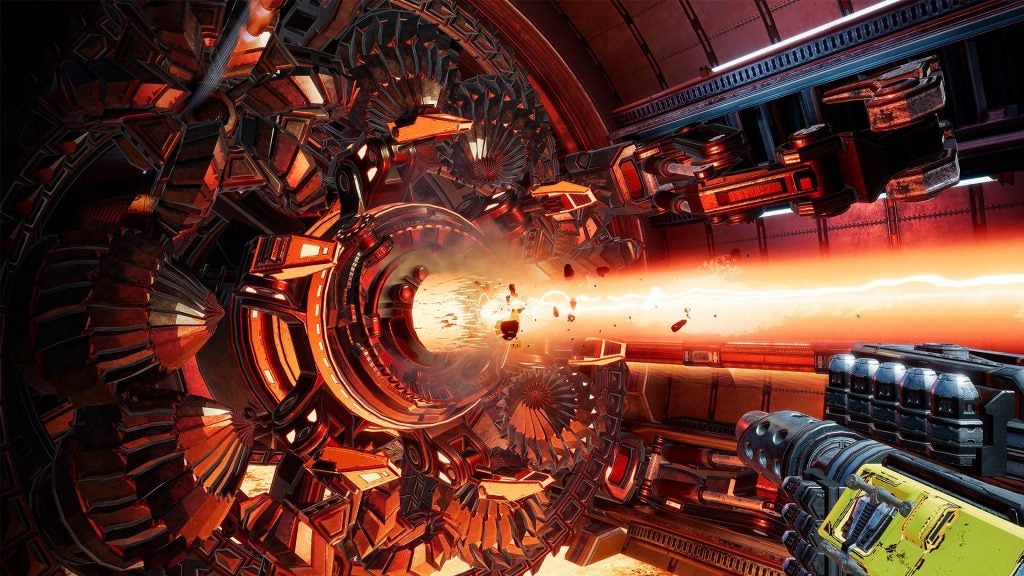 Mothergunship is very well paced, though, in the sense you never know what you’re going to get. Each room is different from the last, and this is mostly thanks to the studio’s randomly generated algorithm which has been designed to ensure every time you progress onward you’re greeted with something different. This does mean you can walk through a door and think you’re about to explode, or simply be asked to jump on some platforms to whatever is next. It’s necessary in a game like this because, on occasion, it can get beyond intense, which again, is the idea. You play to be challenged, and hopefully, to win.

There’s a huge curveball here, mind, as you’re also encouraged to dip into the title’s gun editor and see just how creative you can be. Loot is constantly on-hand throughout, and while some of these are performance based, others are parts for you to toy around with when it’s time to build. If you can connect things together, more often than not, Mothergunship will let you construct it, and some of the end products that are possible are borderline nuts.

You can affect fire rate, bullets per shot, a gun’s overall stats and far more, and the real key is that if a barrel is pointing forward, it’ll fire when you press the trigger. This obviously helps no end in harder rooms because eventually you can be firing off 12 bullets at once should you so wish, but that has to be offset by the fact you can throw all your ammunition away in seconds if you’re not smart with it. 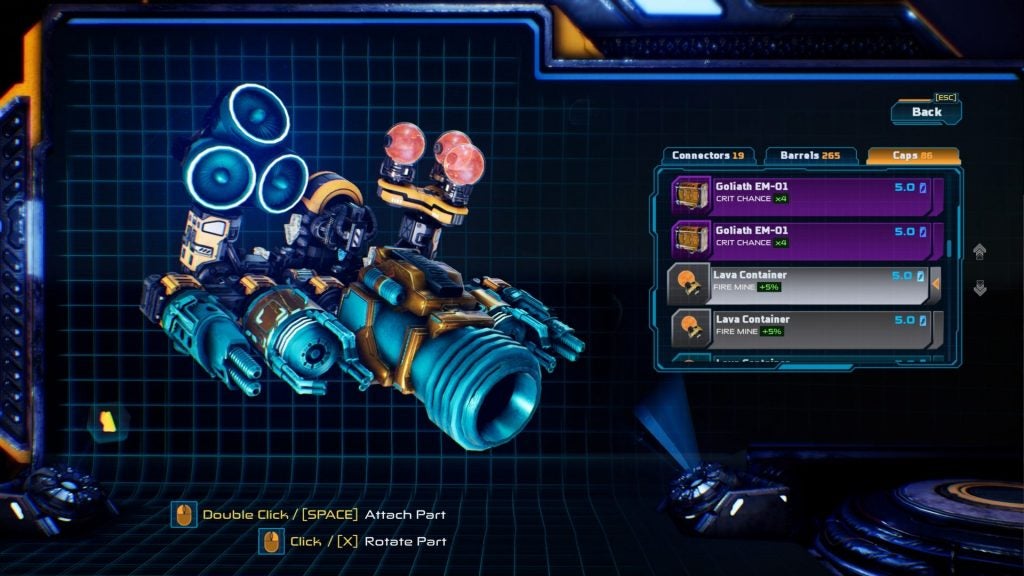 At first glance the build options seem endless, but after a while things get to feel quite samey. You can always go back to the well and shake up your arsenal to the point it feels more entertaining again, but ultimately the concept here is always to enter a new area, do away with what’s in front of you and then move on.

Mothergunship’s metal-like aesthetic can also get a little claustrophobic. After a while it all starts to look very similar. It’s certainly not bad, but there is the looming impression that you’re stuck in the same area even though the test in front of you continues to evolve.

This is counteracted thanks to some great boss fights that do try and change things up, and as you’d imagine these can be demanding to say the least. You’ve got to take everything you’ve learned – and your Frankenstein-esque weaponry – and put it all together in order to be victorious. To say it can be frantic is an understatement.

Mothergunship is a credit to both the developer and the genre it finds itself in given how innovative it can be, and if the idea of shooting and constant dodging appeals then it seems very likely this will win many people over effortlessly. What it sets out to do, it does very well. If you need a bit more variety to your shooters, Grip Digital’s attempt may fall a little short, but it knows its audience and what it wants to achieve. With that in mind, it’s a pleasure and will easily please a very large crowd of people.

Mothergunship is one of the more creative first-person shooters to come along in a while, mixing the genre effortlessly with a shoot ‘em up and having a ball with it.