Even with an attempt to offer a more affordable Montblanc smartwatch at a lower price point, the Summit Lite is still absurdly expensive, and in refusing to use better tech than its pricier siblings, the watch is outperformed by wearables that are less than half its price. Unless you're completely dedicated to the Montblanc brand and the style that's on offer here, there's very little reason here as to why you should opt for the Summit Lite over any of its competitors.

In the perpetual smartwatch battle between style and substance, Montblanc sides with the former with its latest wearable device, the Montblanc Summit Lite.

If you’ve ever gone shopping for a smartwatch with a budget of say £300 or less, then chances are that you might never have noticed that the luxury brand Montblanc throws its hat into the Wear OS ring on occasion with its Summit series of wearables.

Despite the fact that they carry largely the same internals that you might find on a much cheaper watch, Montblanc’s wearables are slapped with a hefty price tag due to the brand itself. The last entry, the Montblanc Summit 2 Plus, currently retails for an eyewatering £1040/$1170.

As a means of appealing to a broader market, Montblanc has released the Summit Lite with a comparatively smaller price point of £700. Even at this lower price, the Summit Lite is considerably more expensive than most Wear OS watches, but is it one of the best smartwatches around? 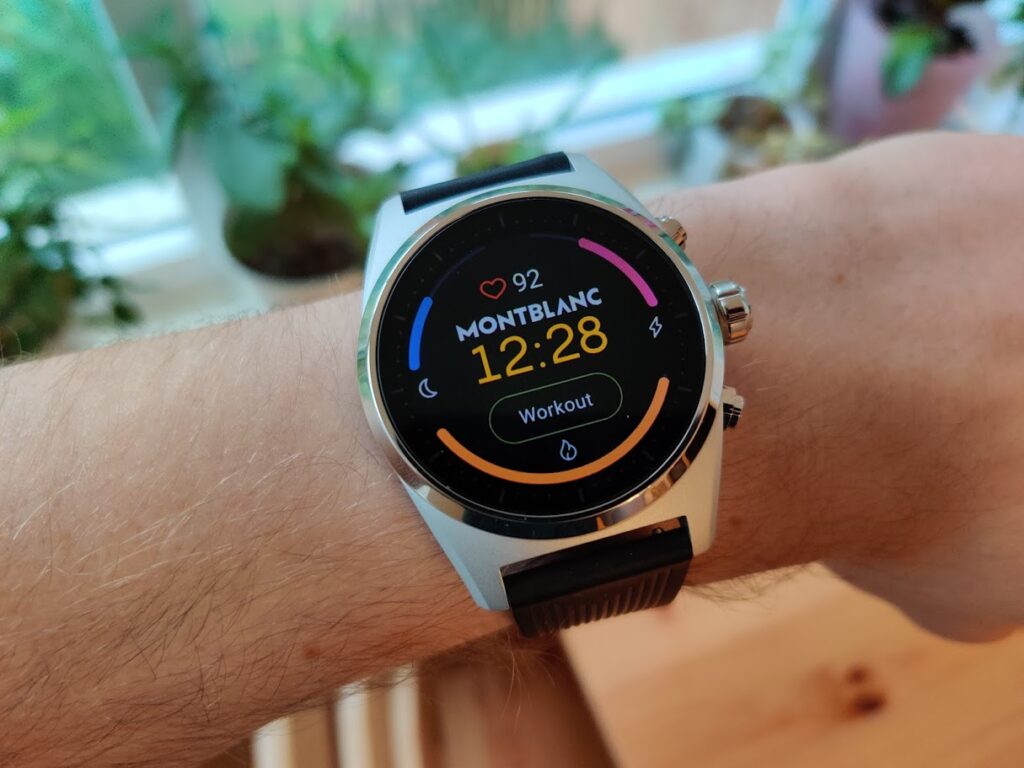 Design and screen – the Summit Lite’s best features by far

It should come as no surprise (particularly if you’ve already looked at the accompanying pictures) but the Summit Lite absolutely nails its goal as a fashionable timepiece. The aluminium grey model in particular – the same one used for this review – just leaps off the wrist and demands that you give it your full attention.

The metallic rim surrounding the display catches the light almost perfectly, and does a great job at framing the screen as well. Of course, the real star of the show is the massive rotating crown flanking the Summit Lite’s right-hand side, in between two tactile push buttons.

Large enough to brandish Montblanc’s logo on the side, this rotating crown is about as sturdy as any crown I’ve ever used on a watch, and that extra space to hold on to ensures that scrolling through menus is a breeze.

While there are fabric and rubberised watch straps available for the Summit Lite, I’m a tad more inclined to favour the latter as it remains comfortable against the wrist during a workout.

Outside of exercise deciding which option to go for just comes down to a matter of personal preference. 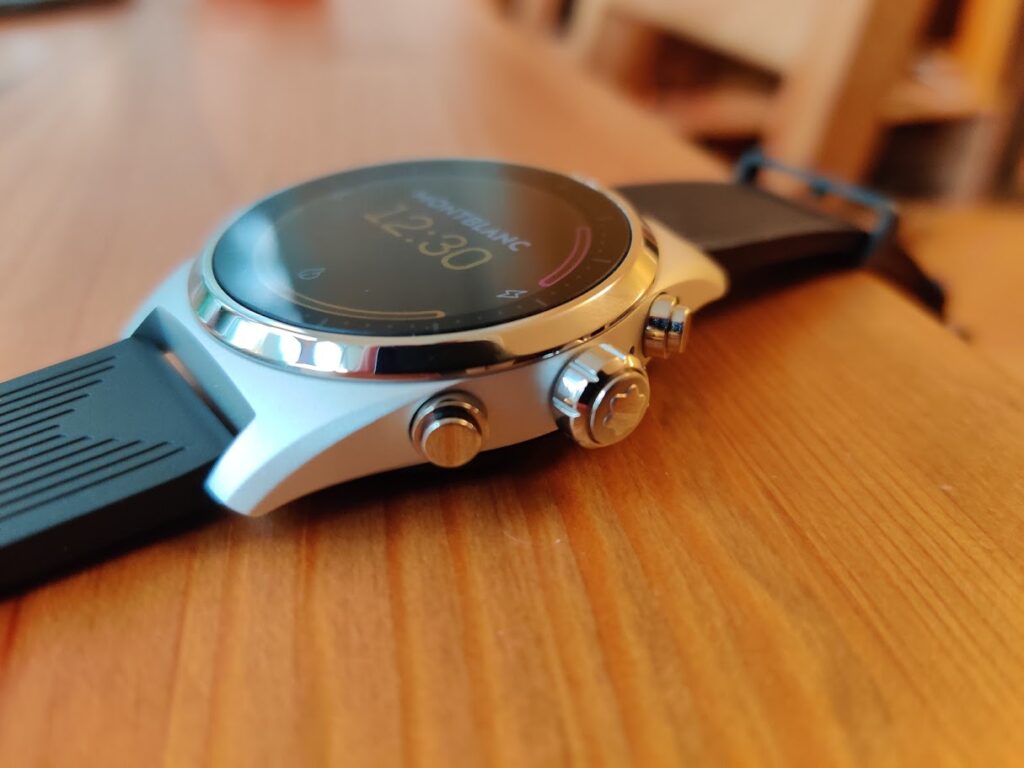 To complement its high-end aesthetic, the Summit Lite features a bright 1.2-inch AMOLED display that’s very easy on the eyes. Even with subdued visuals during the ‘always-on’ mode, the superb visual clarity of the info on-screen remained when indoors. As is the case with most Wear OS watches however, it was difficult to see the always-on display in direct sunlight.

The biggest issue facing the Montblanc Summit Lite is that its high price implies that you’ll also be paying for the latest and greatest specs, alongside the sense of high fashion, but that’s sadly not the case.

If you’ve taken a glance at the spec sheet above then you might have spotted the Snapdragon Wear 3100 as the chipset of choice for the Summit Lite. Given that the superior 4100 option is now available (as seen in the TicWatch Pro 3), it’s disappointing to see the Summit Lite shipping with dated internals.

The watch still runs a heck of a lot faster than wearables released as recently as last year that still pack the positively ancient 2100 processor, but after having experienced a much more efficient system in TicWatch’s latest wearable – Montblanc has left me wanting. 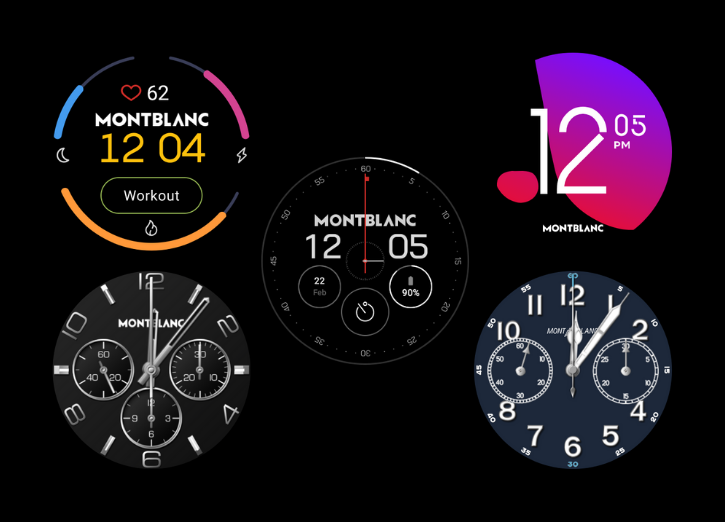 It’s not a complete disaster, as the Montblanc does include a small but fashionable collection of exclusive watch faces to complement its design.

The default setting is Montblanc’s fitness-focused watch face, which relies so well on the use of minimalism and bright colours that it almost looks like something Fitbit might have made.

Of course, there are more traditional watch faces available if you’d prefer, including the Summit and Energy options. While there is only five exclusive watch faces featured on the Summit Lite, there is a new ‘Daily Style’ feature that lets you cycle through a seemingly endless library of faces, letting you use one of the many options for a day for free, with the option to purchase outright and use for as long as you like.

Beyond the watch faces, Montblanc has positioned the Summit Lite to be a health and wellbeing conscious smartwatch, and it’s easy to gauge as much from the apps that have been included. Firstly, there’s are two dedicated sleep tracking apps, one of which actually does a good job of breaking down what happened during your last circadian rhythm, whilst also giving tangible advice on how to improve your quality of sleep.

Secondly, the watch will track your body’s energy level in the background, taking into account a variety of factors including the amount of rest you receive, stress taken on throughout the day and any workouts incurred. While this system is handy to have, the advice it dishes out feels more generic and unhelpful than what’s made available via sleep tracking. 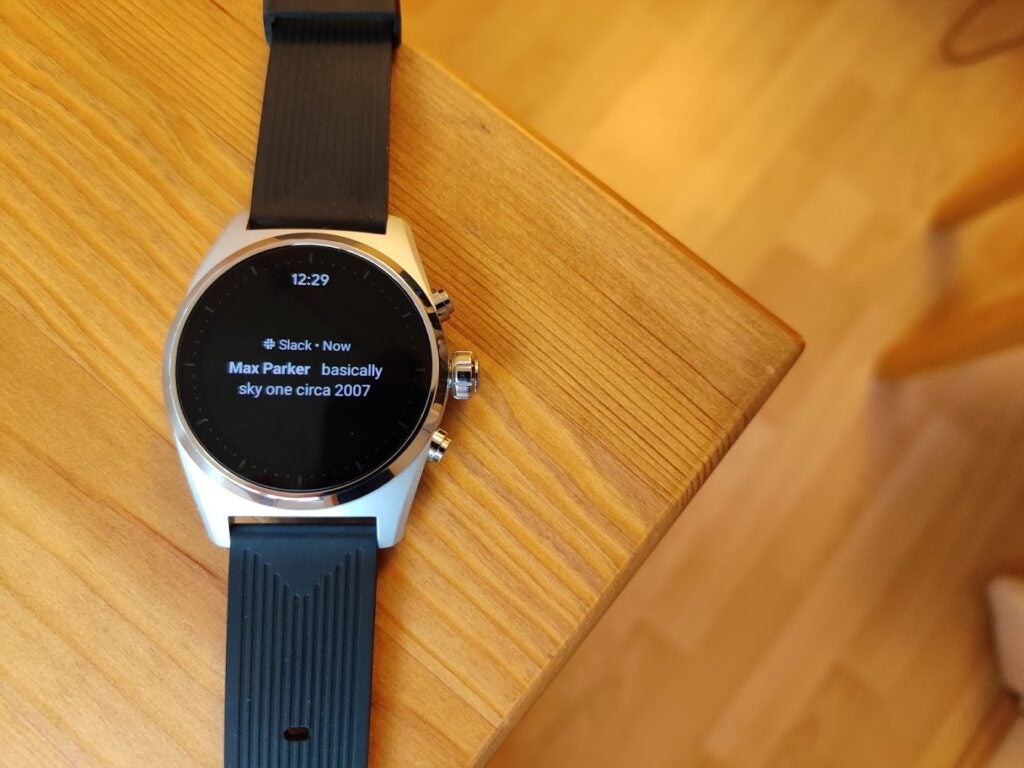 What is a shame is that there’s no way of reading this data without diving into the watch itself, as it doesn’t sync with Google Fit and there’s no other app available to transfer the data to.

As previously mentioned, the Summit Lite does lean towards fitness tracking in a few areas of its design, more so than your typical Wear OS smartwatch. You can gauge as much from the big ‘workout’ prompt on the default watch face, and a simple press of the bottom right button will take you to your fitness dashboard.

In this section of the UI, users can have a glance at the amount of calories they’ve burned, their fitness level, hours left to full recovery and even the overall efficiency of recent workouts. What is likely to grab most people’s attention however is the Cardio Coach included in this dashboard, which lets you know the duration and BPM range you should be hitting for your next workout, based on all of the aforementioned metrics.

Any feature that aims to help people in improving their fitness routine is great to see, but Cardio Coach stops short of actually giving any recommendations for the type of exercises someone might want to consider in order to hit their target. As the name implies, Cardio Coach isn’t particularly inclusive of other forms of exercise either, as strength training rarely delves into the BPM levels being asked of the system. 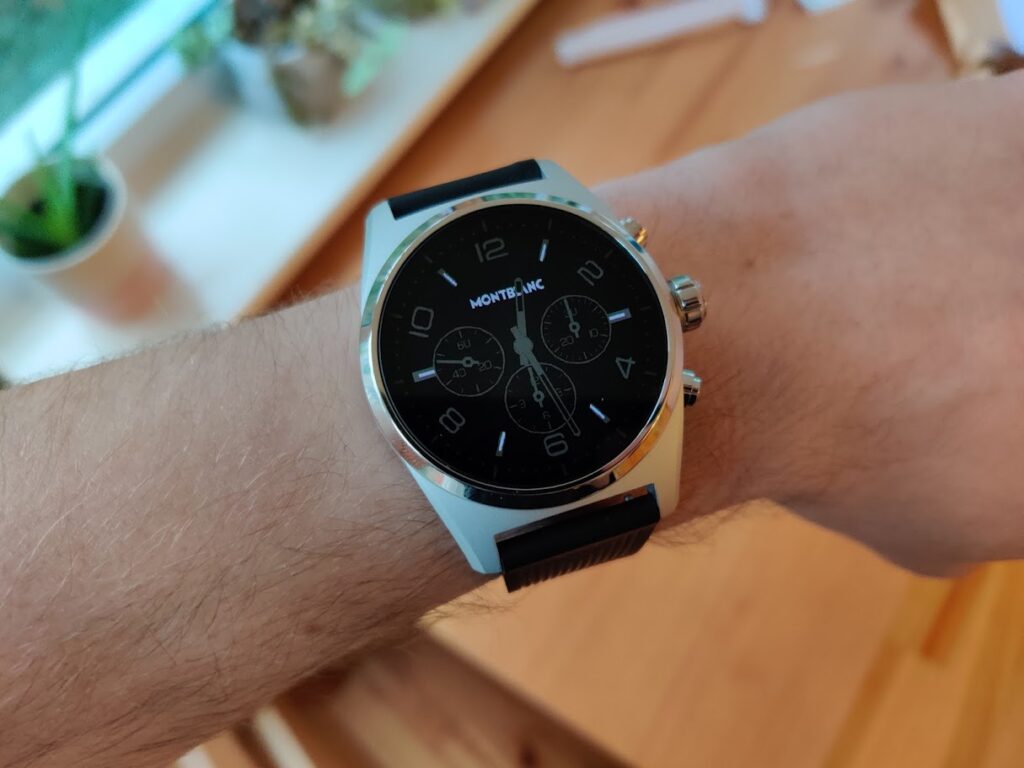 To make matters worse, the activities recorded in this bespoke UI aren’t transferred to Google Fit, so much like with the results from sleep tracking, there is no way to look back on your progress via your phone.

Despite having untethered GPS tracking, the Summit Lite won’t show you your route if you decide to track it in this way. It almost goes without saying that after I’d come to learn the ins-and-outs of this system, I promptly switched back to using Google Fit where I found the experience to be far more seamless.

Connecting to GPS directly on the watch took roughly 40-45 seconds which is fine, but I would expect it to be a lot faster for a watch of this price. When comparing the Summit Lite’s HRM monitor to a dedicated chest strap, the watch fared reasonably well. For instance, during a run where the strap registered a high of 192BPM, the Summit Lite wasn’t far behind with a high of 188BPM. It’s nowhere near the levels of Coros Pace 2 accuracy, but it gets the job done.

In the last year and a half, great strides have been made in the Wear OS market to allow its smartwatches to go the distance where battery is concerned. The Fossil Gen 5 brought in a wealth of battery modes that could be customised to suit a user’s needs, and more recently the TicWatch Pro 3 could get through an entire weekend before needing to be put back on charge come Monday morning. Unfortunately, the Summit Lite ignores all of this great progress.

During my testing, starting the day at 6am, I was able to get to just shy of midnight with 42% left in the tank, and that was with a 30-minute tracked workout, several notifications coming in throughout the day, and an always-on screen. As I continuously found to be the case, there would be just enough battery left to wear the Summit Lite to bed for the sake of sleep tracking, but I would immediately need to put it on charge as soon as I woke up. 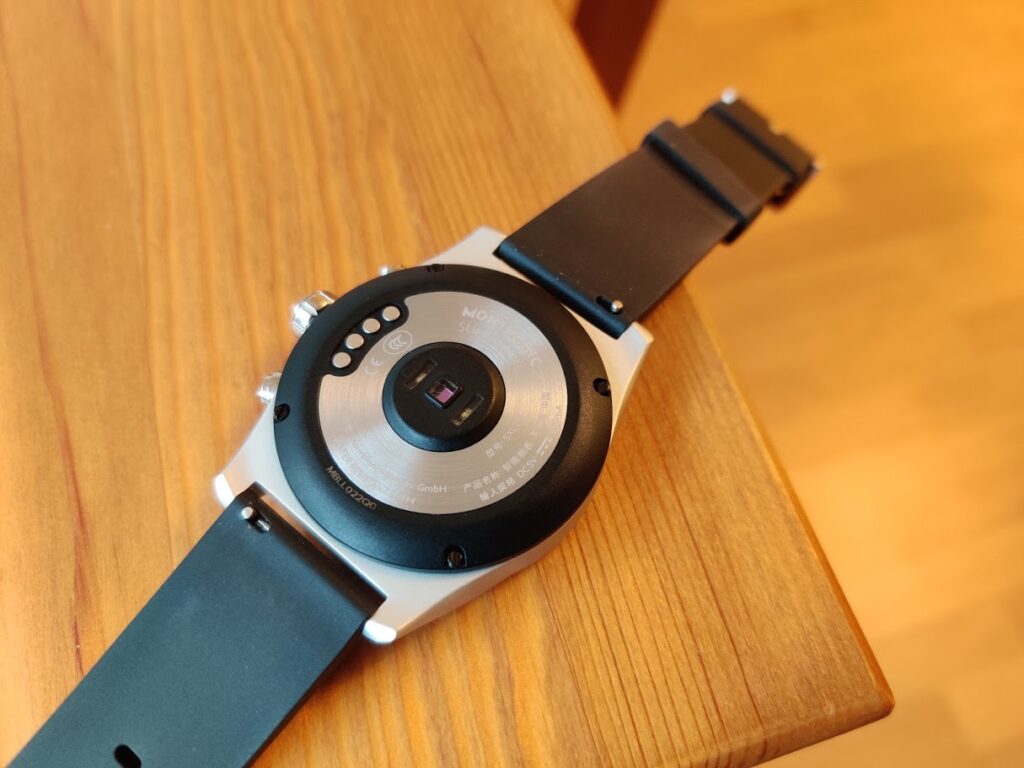 As a result, don’t expect to get any multi-day action out of the Summit Lite. Even with certain features switched off, like the always-on screen, there just wouldn’t be enough battery left to get me safely through a second day, so a daily trip to the power outlet is a must if you plan on using the Summit Lite.

At the very least, charging the watch feels a touch more modern as the Summit Lite comes boxed with a sturdy magnetic charging cradle that can get you from 5% to 100% in roughly an hour.

You should buy the Montblanc Summit Lite if…

Regardless of how I feel about the Summit Lite’s performance and internals, there’s no getting around the fact that it’s just an absolutely gorgeous device to look at. I’d be lying if I said I hadn’t enjoyed wearing such a fashionable watch, and so there’s definitely some appeal here to the more fashion-conscious among you.

In keeping with its stylish aesthetic, the Summit Lite also boasts some of the nicest looking watch faces I’ve seen on a smartwatch. Plus, if you ever do get bored of the exclusive collection included, then you have the Daily Style option to try out a near endless supply of colourful options.

You should not buy the Montblanc Summit Lite if…

Even now, after weeks of testing – I still can’t believe that the Montblanc Summit Lite retails at £700. I’ve yet to come across any smartwatch that’s worth that price, and unless you’re dead set on having the Montblanc’s branding splashed across your wrist then it’s very difficult to justify spending such a large amount of money.

When it comes to processing power, the TicWatch Pro 3 vastly outperforms the Summit Lite, courtesy of its newer Wear 4100 chipset. It’s incredibly disappointing that, in spite of its price, the Summit Lite comes with aged internals that immediately dates the experience of using the watch in 2021.

Battery life on Wear OS watches has gradually been getting better, but the Summit Lite goes back several years by offering a measly day-long battery life. If you want something to get you through your daily routine, app usage and even the occasional workout, then there are better watches out there that can go the distance.