For its very reasonable asking price, the Coros Pace 2 packs in almost every feature that a seasoned runner could ask for. There are very few smart features to speak of, and you’ll certainly feel the lack of offline music playback. However, in terms of delivering a robust fitness tracking experience for its core audience, the Pace 2 absolutely nails it. I’d recommend steering clear if you’re a beginner, though – the Pace 2 means business and is better suited for runners who know exactly what they’re doing.

With the Coros Pace 2, the fitness focused company brings its high-end tracking software to the more affordable end of the market.

In an industry that’s dominated by names such as Garmin and Fitbit, it’s great to see a new company go head to head against the best fitness trackers by offering a product with a new perspective.

If you’ve had your ear to the ground, then you might already know that Coros has slowly been making a name for itself since its launch in 2014, and that prowess is best encompassed in the brand’s most affordable device, the Coros Pace 2.

Costing £179.99/$199.99/€199, the Coros Pace 2 manages to undercut the Fitbit Versa 3, giving the wearable every opportunity to snatch some running enthusiasts away from Fitbit. As for the device itself, I now have my final verdict following several weeks of testing. 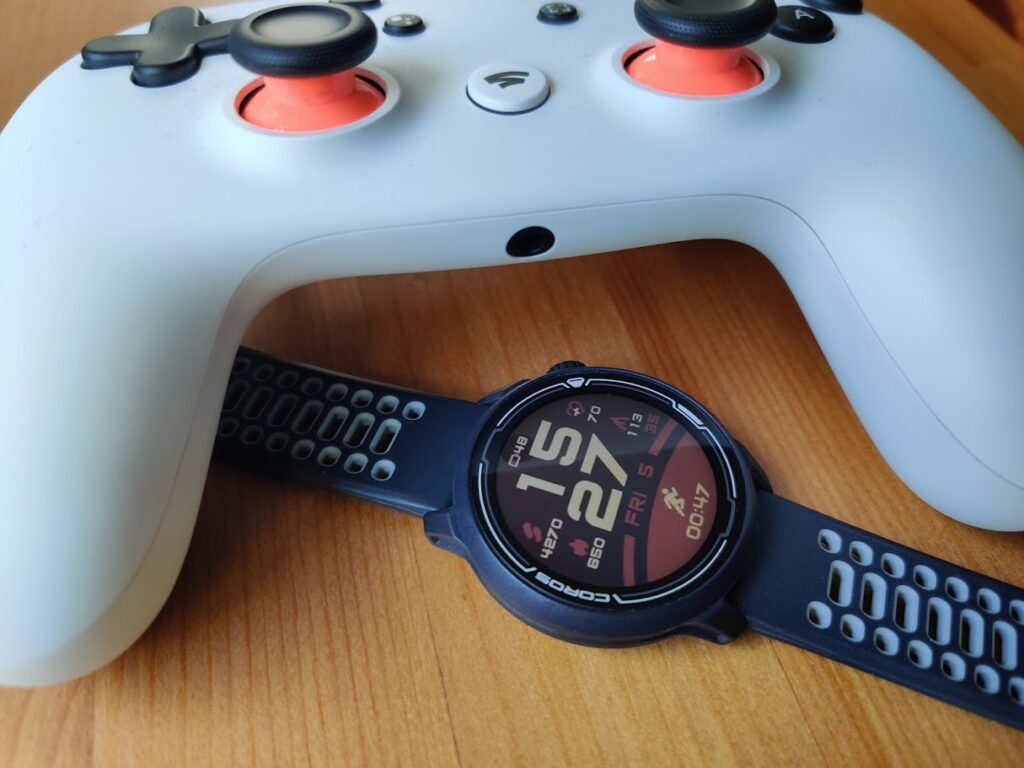 It’s rare to see the weight of a fitness tracker as a headline feature – particularly with all that the Coros Pace 2 can do – but at just 29g, it’s certainly something to shout about. On picking up the Pace 2 for the first time, I had to double check that there wasn’t a piece of the watch missing. This watch is incredibly lightweight, and perfectly suited for anyone who doesn’t like to be bogged down by a huge timepiece.

There are just two physical inputs that flank the Pace 2’s right-hand side: a standard push button and a rotating crown that can also be depressed. There’s no touchscreen here, so these will be your only forms of input. This isn’t an issue, however; the button and crown feel incredibly tactile and I was able to pick up their functions fairly quickly.

Two band options are available when purchasing the Coros Pace 2: one in nylon and the other in silicon. We were sent the silicon option for testing, which suited my preference since they tend to be better for workouts, and the one here is no exception.

Screen-wise, the Coros Pace 2 has more in common with Garmin’s displays, featuring an always-on memory LCD panel that lends itself well to a longer battery life by favouring function over form. In direct light, the display is as easy to read as E ink, and in those darker moments you can always activate a backlight when raising your wrist or through using one of the inputs. 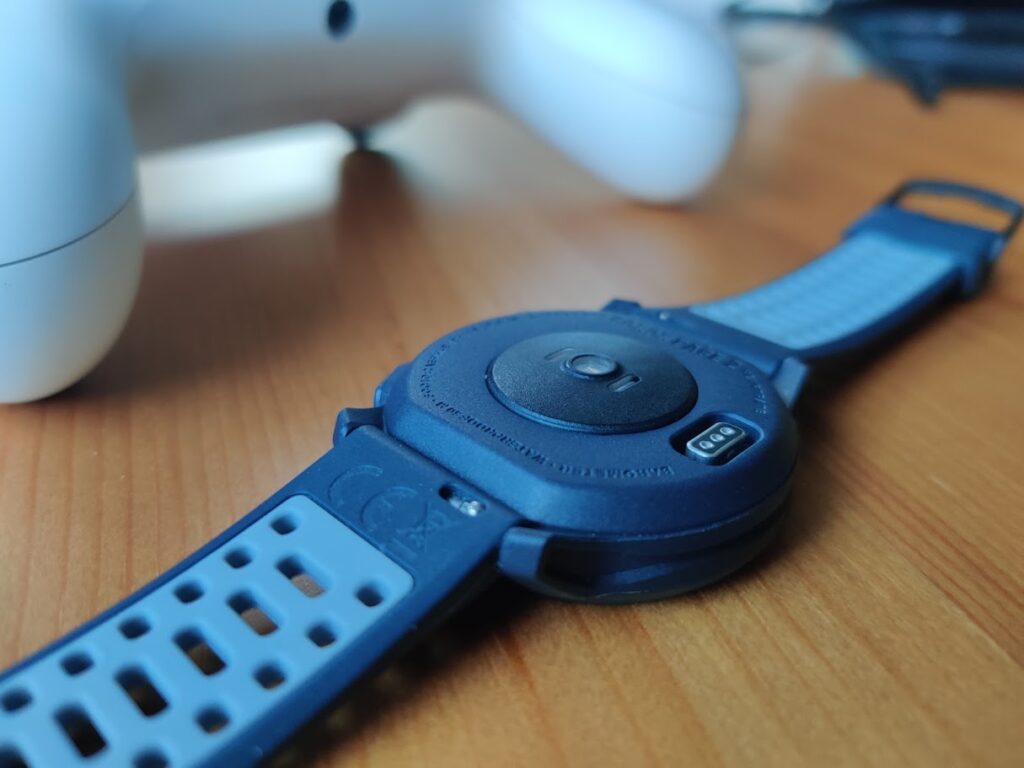 The display didn’t grab my attention in the same way that an AMOLED panel might have, but the Pace 2 isn’t concerned with eye-catching watch faces but rather with delivering a device that can be easily read outdoors during a run. To that end, the Coros Pace 2 nails it.

I’ve been careful up until this point to avoid labelling the Coros Pace 2 as a smartwatch, as I don’t believe that it includes enough smart features to bring it out of the fitness tracker category. Notifications will appear on the Coros Pace 2, and you can dive into your notification history at a moment’s notice, but that’s about it.

You won’t find offline music storage or even a means of controlling music that’s being played on your phone. There are no major apps here either, unless you count the inclusion of a metronome as a “must-have” app. None of these is a deal-breaker mind you, since the Coros Pace 2 is unabashedly obsessed with fitness and that’s where its focus remains. So long as you’re content with that, you’ll get on just fine with it.

As a result of that lean towards fitness, the Pace 2 does pack a solid number of GPS tracking features. The watch can track your positioning unaided by a smartphone, and through testing it did a fantastic job of establishing a connection fairly quickly (usually between 10-30 seconds) and then maintaining it at a stable level throughout my workout. 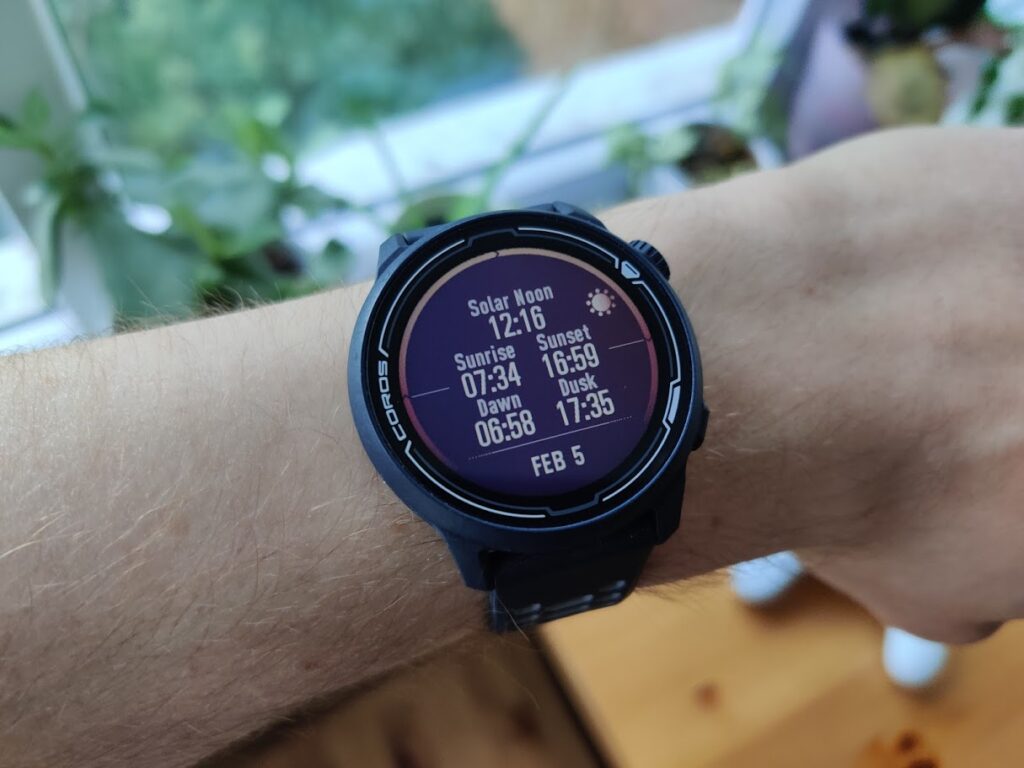 The Pace 2 can also keep tabs on the quality of your sleep, but unlike the Fitbit app, the accompanying Coros app doesn’t configure the data it collects into tangible advice on how to improve your circadian rhythm. Unfortunately, users are simply shown a graph depicting exactly how much sleep they got and the various metrics that were tracked throughout the night – presuming that any user can look at said information and immediately understand what it all means and how it applies to them.

As an unfortunate side note, the Pace 2 is currently afflicted with some Bluetooth issues – ones that Coros itself is aware of. In my experience, switching Bluetooth off and on at any point will prevent the Coros Pace 2 from connecting with the Coros app. This can be fixed by restarting your phone, but this is disappointing, particularly since the wearable excels elsewhere.

Based on its no-nonsense approach to favouring fitness tracking over smartwatch features, I should have known that the Coros Pace 2 took itself very seriously in this regard – but it didn’t fully dawn on me until I reached the “records” section of the app. The entry-level record to hit is your first 10km – not 5km.

I enjoy running, but there’s a huge difference between 5km and 10km, particularly if you’re starting out. The whole reason that the Couch to 5K is so popular is because it’s a more achievable goal for beginners, but the Coros Pace 2 seems to be under the impression that anyone looking to buy it is already a reasonably accomplished runner. 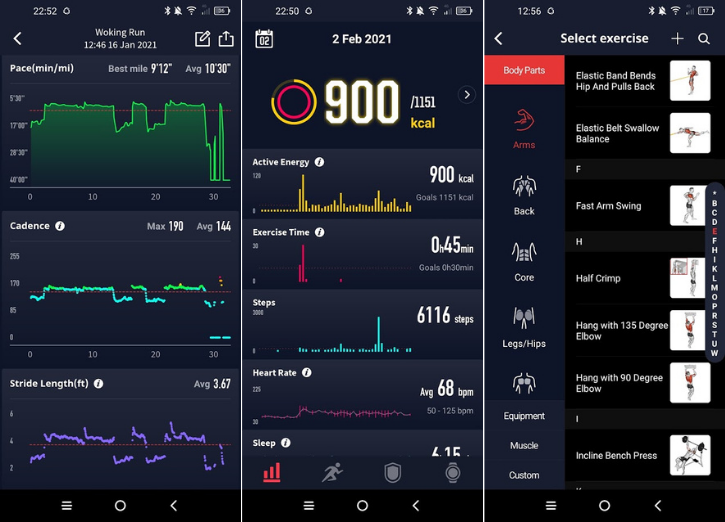 Even small, encouraging features such as an hourly reminder to get up and move around aren’t to be found here. This is a runner’s watch with runners in mind, and if you don’t fall into that category then you better jog on (metaphorically speaking).

Still, if you’re at a level of competency where you feel the Coros Pace 2 will be a good fit, then you’re in for a treat. Starting with the heart rate monitor, the Pace 2 blows the competition out of the water with one of the most accurate sensors I’ve found on a wearable. At an almost perfect rate, the device was able to register the same max heart rate (and a reliable average) as an accompanying heart rate strap, worn around my chest. To find this level of precision on a wearable, particularly one that’s so affordable is nothing short of brilliant.

There are plenty of other metrics to fawn over as well, such as pace, cadence and elevation, thanks to the inclusion of an altimeter, accelerometer and more. If you’re the type of runner who obsesses over the details and every minor improvement, then the Coros Pace 2 is designed with you in mind.

For someone like myself, who leans more towards strength training, the Pace 2 also had plenty to offer. For instance, I found the rep counter – while far from perfect – to be one of the most accurate I’ve come across on a wearable. There’s also a body heat map that can be viewed in the app, showing where your muscles are in relation to reaching peak performance. You can even set up a strength workout from a near-endless supply of exercises, each with a detailed entry and animation to ensure you achieve the correct form. 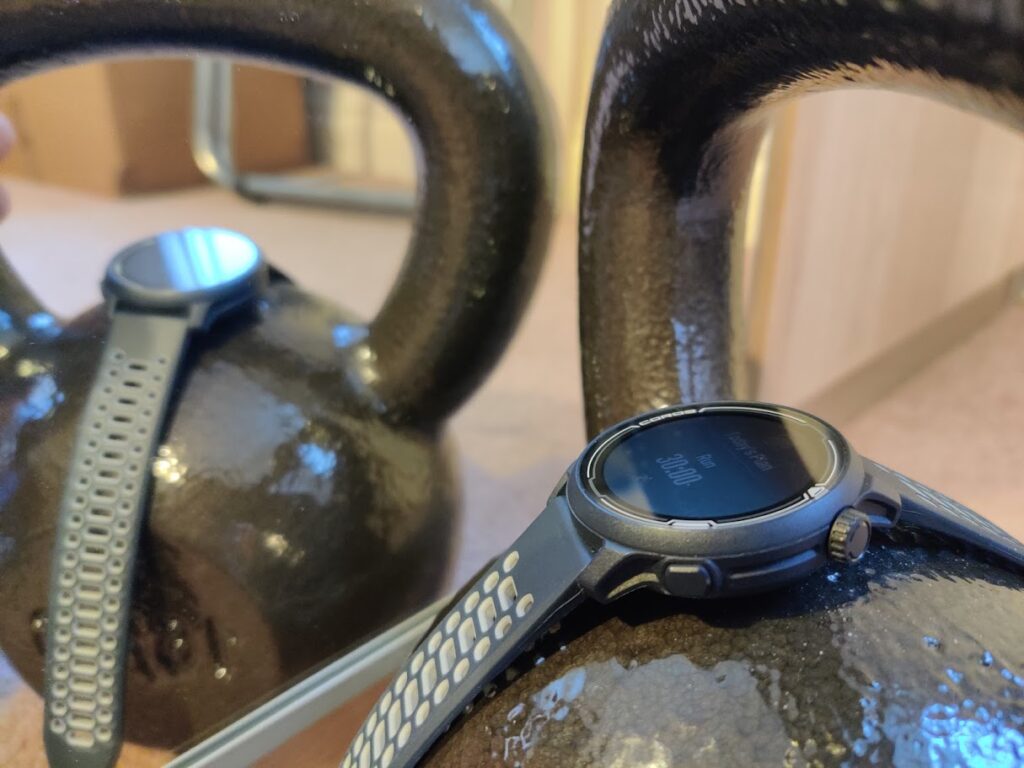 Again, it’s almost absurd to think that a fitness tracker at the Pace 2’s price point is able to cram in as many fitness tracking features as it has. The whole experience takes Garmin to task in a big way.

Since the Coros Pace 2 doesn’t have to worry about battery-draining apps or a power-guzzling display, it can get by for quite a long time on just a single charge. During my testing, I was able to keep the Pace 2 going for a total of 15 days before having to whack it back on the included charger – and that was with a total of 13 tracked workouts (three of which were runs with GPS switched on).

Coros quotes a total of 20 days for “daily use”, and while that didn’t quite match my personal use of the device, I’m sure that other users could hit the full 20 days with fewer workouts tracked. That longevity also allows for the Pace 2 to go the distance during marathons (whenever they come back, at least). You can get a full 30 hours worth of battery life with GPS consistently tracking your location, which is more than you could possibly need – although, if you can run for more than 30 hours, then consider me impressed.

If you need the battery to stretch even further when in GPS mode, then there is the “UltraMax” option which tracks your route for 30 seconds (with two minute intervals) and uses an AI to map out the rest – netting you up to 60-hours of use. 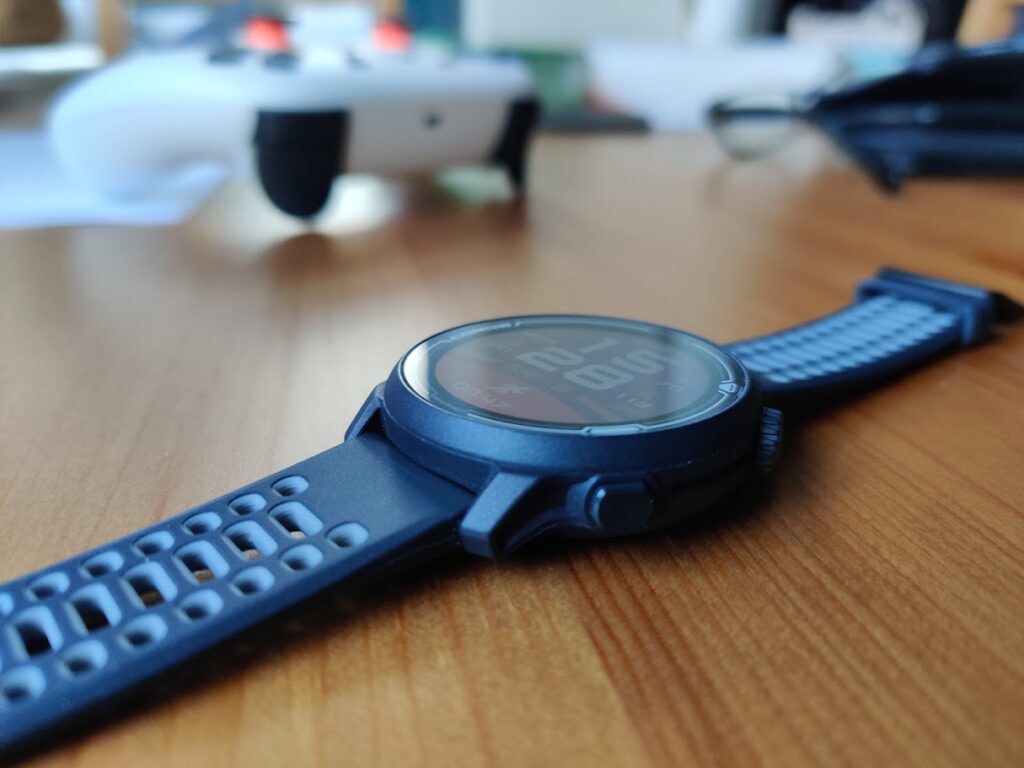