As the name suggests, Panorama 2 is the sequel to B&W’s original Panorama soundbar, which we reviewed back in 2009. Despite its stunning sound quality, we weren’t impressed by the original’s lack of HDMI inputs, however its successor adds these crucial connections alongside an enhanced user interface and ‘dramatically improved acoustic performance’. Sounds good to us. 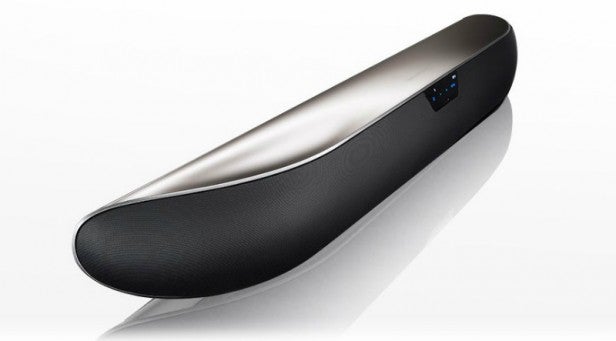 Like its predecessor, the Panorama 2 is the Rolls Royce of soundbars, boasting luxurious build quality and looks that’ll stop you dead in your tracks. The 1.1m wide enclosure is remarkably heavy and rigidly constructed, which is a good start. It’s bulkier than your average soundbar too, but masks this heft with an elegant design.

It’s styled in pretty much the same way as the original Panorama – a sleek, swanky unit with beautiful curves and a mirror black stainless steel skin. It’s a complete fingerprint magnet but looks like these are worth the occasional squirt of polish. On the front, a black steel mesh covers the drive units, and contrasts with the mirrored finish beautifully.

Also on the front is a new proximity-sensing display panel, which lights up when it detects a hand nearby then fades to black when you’re done – hardly essential stuff but undeniably cool. It features a row of touch-sensitive controls, including source input, volume and sound mode selection.

The soundbar can be wall-mounted using the supplied bracket and keyhole fixings on the back – although at 14.1kg you need to be pretty sure of your DIY skills. It’s also supplied with screw-on rubber feet for tabletop mounting.

On the back is a recess housing the sockets. As mentioned, Bowers & Wilkins has added HDMI functionality to the Panorama 2, but not just one or two sockets – it sports three inputs and one ARC-compatible output, which means you can listen to games consoles, TV receivers and Blu-ray decks through the soundbar and use it as an HD switching hub.

You’ll also find a combined analogue and digital 3.5mm input, a 3.5mm RS-232 service connector and a subwoofer output. The lack of a USB port for playback of lossless music files is a surprise, which would have been very welcome on an audiophile unit like this.

The Panorama 2 features newly designed drivers – nine of them in fact. There are two 3-inch mid-range drivers, which offer wider dispersion properties than its predecessor in a bid to improve surround performance. The two 3.5-inch subwoofers have also been revamped to reduce resonance and boost dynamics, while the new tweeter uses the proprietary Nautilus tube-loaded technology to offers smoother integration with the mid-range.

These five drivers form the all-important centre speaker, with the rest of the sound being delivered by four 3-inch drivers, each one housed within its own enclosure.

There are six class D digital amplifiers on board – 5 x 25W for the centre and surrounds, and 50W for the subwoofer. The unit decodes Dolby Digital and DTS but not Dolby True HD or DTS HD Master Audio, which is surprising for the money but not a major problem given that it accepts PCM from Blu-ray players via HDMI. Dolby Pro Logic II processing is on board to expand stereo content.