Building a better sports game isn’t always about the big stuff – the new modes or game mechanics that EA Sports always likes to trumpet when it has another FIFA set to launch. Sometimes it’s about the accumulation of detail that makes the experience feel more authentic, or even those little touches that make it more entertaining. So it goes with MLB: The Show 17, which does for America’s pastime what NBA 2K17 did for basketball last year.

Of course, it helps that the visuals are stunning. Baseball isn’t what you’d call the world’s fastest-moving sport and there’s no need to keep dozens of players on the screen at once, so MLB The Show 17 gets the luxury of rendering its players and stadia in exquisite detail, with some of the most impressive, photorealistic surface and lighting effects you’ve ever seen.

It’s hard to know what’s more gobsmacking: the ludicrous detail in the embroidery and stitching on the uniforms, or the way the sunlight gleams off a plastic cap? Maybe the ridiculous effort that has gone into producing a convincingly lifelike crowd, where the individuals don’t just look but behave differently to each other, moving in response to the action on the field?

Turn a blind eye to some fuzzy-looking beards and silly-looking hair effects and MLB The Show 17 might just be the best-looking sports game yet, particularly in pin-sharp 4K and HDR on a PS4 Pro. Seriously. The replays are straight out of a baseball movie. 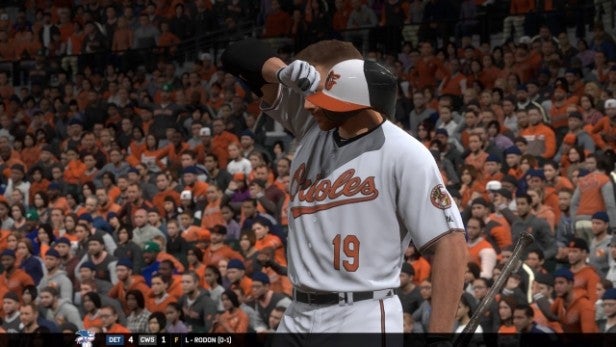 The level of fidelity isn’t just for eye-candy, either. Baseball is a game where reading intentions and responding quickly matters, and so the level of detail in the players’ animations actually helps you play a better game. You can try and gauge where the pitcher’s going to send the ball, or when the guy on second base is going to run.

There’s a fabulous feature where you can sneak a peak over your pitcher’s shoulder to see if the chap on first base is going to try and steal second while you’re unaware. Is that just a twitch, or is he cheeky enough to make the run?

What’s more, this is a game that’s happy to have you playing it your own way. For every major activity in the game – pitching, batting, running, fielding – there’s a choice of control schemes which might range from ‘take care of this automatically so I don’t have to’ to ‘take these more realistic but challenging analogue controls and give them your best shot’. For each, there will be something that suits you, and if you don’t want the bother of handling your fielders or forcing the team to keep running, it’s not a problem. Focus down on pitching and batting – it’s absolutely fine.

That flexible approach extends to the game’s bewildering variety of modes. Once you’re through setting up your control options and the basic coaching in the introductory game, you’re free to move on to taking one of the big franchises through years of series, online or offline, or just play some demonstration games while you work on your skills. You can take part in a selection of training and challenge exercises or settle for a session on Diamond Dynasty, MLB’s equivalent of FIFA Ultimate Team. 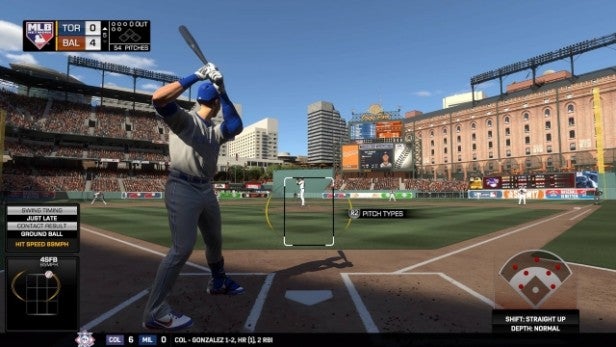 Even within these modes there are more variations. Diamond Dynasty, for example, lets you play earn new cards and complete challenges in online games or offline matches against the CPU, but you can also take part in a bizarre Risk-like conquest mode, where you’re battling the other major franchises for fans, committing fans to the board then attacking or defending by playing he match.

As the card system allows you to collect players from different eras, it’s a great way to field a line-up of all-time greats, putting, say, both Ken Griffey Snr and Jnr in the batter’s box or giving you a chance to see how the Dodger’s legendary Jackie Robinson might cope with the Met’s Noah Syndegaard’s fastball. It’s bewilderingly complex in the first few hours, but if you’re looking for an experience with endless depth and online competition, it delivers.

Play in Franchise mode and you can choose how much of a management role you want to take, and even whether to play whole games or play them from the perspective of a single player, giving you a shorter, more focused way to enjoy the game. You can simulate whole games, but with a Critical Situations feature that calls you in for the game’s big moments.

Frankly, each match takes so long – 45 minutes to an hour – that playing through them all soon turns into a trudge. By sticking to the one player or using simulation you get a lot more killer, much less filler. 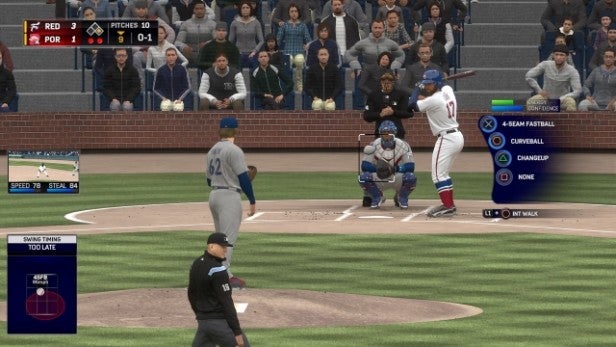 However you play it, MLB The Show 17 plays brilliantly, capturing the tension of pitching, the excitement of going up to bat with all the bases loaded, the misery of striking out at a crucial juncture or fumbling an easy catch. It might seem slow and simple, bar the batting where timing is everything, but it’s really all about understanding the strengths and weaknesses of your players, understanding the current situation and doing your best to make the right play and execute it flawlessly. You may suck at batting for a long time – remember even great players only hit three to four of every ten pitches – but you will get better. Eventually, the whole thing clicks.

Two new additions stand out. The Road to the Show is MLB’s equivalent of FIFA 17’s The Journey, and while it’s not a totally new mode it’s been revised in the style of a slightly old-school sports documentary, following your newbie player all the way from talent scout trials through to the Major League.

After The Journey, Road to the Show feels a little short of soap opera drama, but its use of dialogue and meaningful choices makes you feel like you’re shaping the career and personality of your would-be star. The only slightly downside is that you’re limited to playing that role, so if you pick a pitcher to follow you’ll spend all your time pitching, never fielding or batting.

Retro mode, meanwhile, mixes the beautifully rendered characters of the standard game with the kind of presentation and gameplay you’d have seen in a 16-bit console sports sim. Controls are simplified to the max, the players visibly slide left and right with basic animation, and you can crank through a match in roughly half the normal time. It is, to be honest, pretty gimmicky, but it’s a fun, dumbed-down way to play the game with mates, and a fair bit more accessible than the real deal. 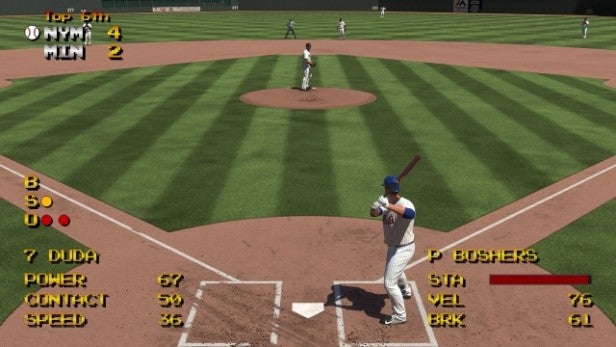 Let’s be honest. Some sports games can transcend your interest (or lack of) in the game. NBA 2K17 is just a brilliant game even if you don’t like basketball. The same goes for the best NHLs and Maddens. That’s never going to be the case with Baseball. It’s slower-paced, a little more repetitive and it demands a certain level of knowledge and a grasp of basic strategy and tactics. For all the cool alt-rock soundtrack and flashy presentation, it’s closer to cricket than it is to football.

Yet if you like the sport and fancy a game with a more relaxed vibe, it’s hard to come to any other conclusion than that this is the definitive video game version.

There might not be a lot of competition for the best baseball sim title, but MLB The Show 17 knocks this one out of the park. It’s a massive, multi-mode effort with fantastic graphics and a flexible approach that lets you enjoy it in your own way, and with Retro mode and Diamond Dynasty it has both casual gamers and the hardcore baseball fan sewn up.

For all its quality it won’t be a mainstream hit outside the USA, but if you’ve any interest in the sport, step up to the plate and swing it like you mean it.