There was a time when 2K and EA Sports were locked in bitter competition to produce the best basketball sim. How times have changed, the NBA 2K series has been pretty much the only game in town for years, with NBA Live continuing to stumble. Luckily, NBA 2K17 happens to be a bloody good game.

The development of NBA 2K over time shares a lot in common with the progression of tech products in general. Each year sees new tweaks and incremental improvements that add to a product which long since reached a refined state. With NBA 2K17, it’s the same story.

Small additions such as new animations, expanded options and improved graphics can add a lot to how immersive the game feels, and 2K has opted for precisely this approach with the latest instalment – which pays off, even if it doesn’t make for the most innovative entry.

When you initially load up the game – if you’re downloading a digital copy, be prepared for a hefty 50GB installation first – you’ll notice all the usual game modes have returned. There’s the central MyCareer mode, as well as MyGM, MyLeague, MyTeam and all manner of possessive-pronoun-led features.

The first thing I did was load an exhibition game to get a feel for what’s changed gameplay-wise. I was relieved to see my favourite retro team, the indisputably pre-eminent ’00-’01 Lakers, remain playable, as do most of the retro teams from last year, alongside a host of European clubs and the usual Dream Team rosters of days past.

Taking charge of the Kobe and Shaq partnership once again, I was pleased to see the game has undergone some visual improvements. There’s nothing here that’s going to blow you away in terms of graphical upgrades, but the overall look of the players and the court seems more refined.

The action also feels a lot more fluid than last year, and you’ll definitely notice the newly expanded range of animations. Pulling up for a classic Kobe fadeaway felt just as authentic as ever, but 2K has also added a host of other, non-character-specific, animations that makes the gameplay in general feel more realistic. 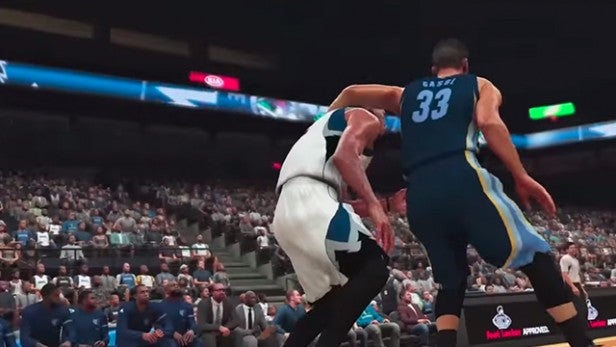 Character models also look great, even if some of the more slight players such as Kevin Durant look a tad strange, and you’ll notice the controls have been tweaked slightly. This time around, the Pro-Stick (right analogue stick) is a more comprehensive handling tool, allowing you to pull off chains of dribbling moves to try and break some ankles and clear a path to the hoop – toppling the ’92 Michael Jordan in this way with early-’00s Kobe was a particularly satisfying experience. But you can also now use the stick to pull up for a jump shot or try to go for a more pinpoint steal attempt.

Of course, you can still use the usual steal, shoot and pass buttons, but you might be surprised to find the passing options have been expanded. Aside from the usual pass button, you can now choose to throw a bounce pass using B, or an overhead lob using Y. It’s useful, and once you get used to it, you’ll find it strangely satisfying to drop a perfectly timed bounce pass to your man in the post. 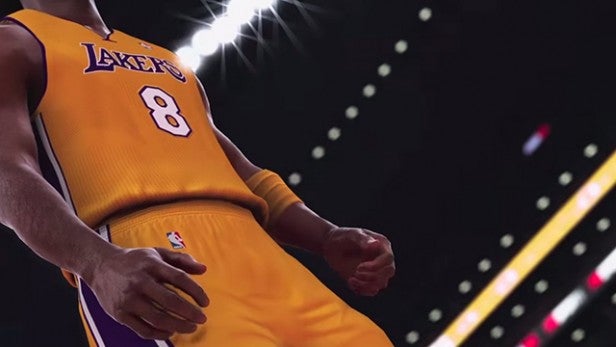 While the new Pro-Stick functionality might please some, I found myself wishing 2K had borrowed a feature from a former NBA Live instalment. It used to be that moving the stick while stationary allowed you to wield the ball to create space – either with a quick step fake or by hiding the ball behind you to draw the reach-in foul. It’s by no means a deal-breaker, but I always found that feature useful and wish it was present here, as I honestly didn’t find the Pro-Stick’s new shooting functions all that handy.

After destroying the ’92 Dream Team with the might of Shaq and Kobe, I was suitably impressed by the new gameplay, and I loaded up the MyCareer mode. The setup is the same this year as in previous versions. You create a character and take him through a full basketball career. This time you begin at the end of high school, and have to pick a college to begin the storyline. 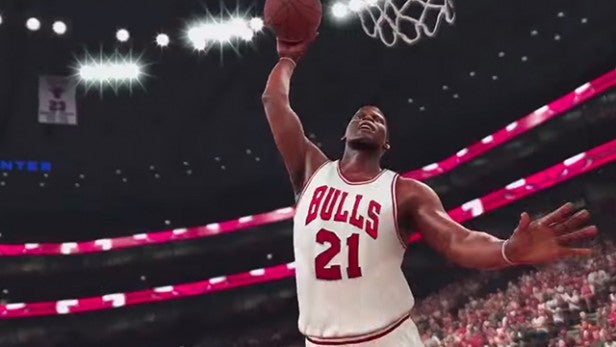 Spike Lee is nowhere to be seen this time around, which will either be a bonus or a drawback depending on whether you enjoyed his attempt at taking the MyCareer directorial reins in 2K16. If nothing else, I was glad not to be burdened with the cringe-inducing name of ‘Freq’ in this instalment. Instead, you’re given the slightly less irritating moniker of ‘Prez’ – as in President.

Despite Lee’s absence, then, your time as Prez is spent in much the same way as before. You create your player and have to work your way through college to gain entry into the NBA in order to embark upon your professional career. You can even download an accompanying app to your smartphone and use it to scan in your face. Well, you can if you want a terrifying glimpse of a future where our likenesses are mapped onto robotic endo-skeletons, as demonstrated by the below image. 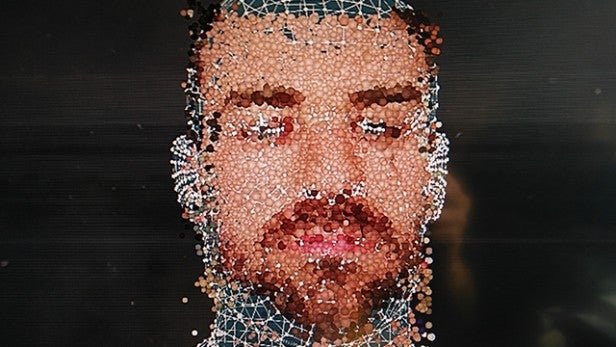 And, to be honest, the result wasn’t all that impressive – yielding what looks to be Bradley Cooper’s overlooked and untalented brother, rather than anyone who looks like me. (Editor’s note: I can confirm that Joe is, indeed, nowhere near this fresh-faced and handsome.) 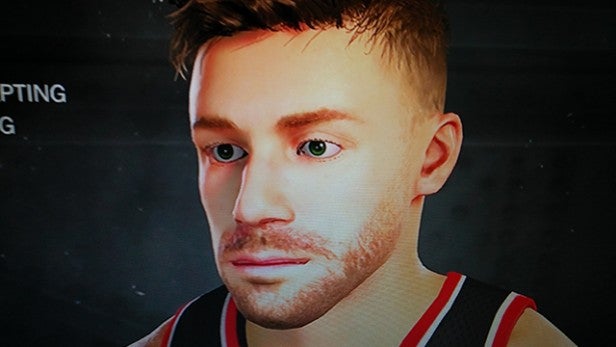 When it comes to building a career, the lead-up to the NBA is, I have to say, incredibly unforgiving. While the college games are fun, and feel just as immersive as the NBA section of the game, you’ll likely find that one mistake can mess up your entire trajectory. I had won every game, racked up some decent scores, and attained some pretty impressive teammate grades, only to lose the championship game and see my projected draft pick drop significantly.

I was eventually drafted by the Denver Nuggets (yay…) as the 15th pick in the first round, but I couldn’t help but feel a little cheated. I thought I was headed straight to the Lakers as the first pick!

And the harshness continues into the regular season. Unless you’re a seasoned 2K pro, you’ll find the number of minutes you’re given as a rookie aren’t nearly enough to establish yourself as a top player. Needless to say, after struggling to make anything of the minuscule amount of court time I was given, the Rookie of the Year award managed to elude me.

Also, star of Creed and Fantastic Four Michael B Jordan is your mate for some reason. And he’s going to be turning up in an overwhelming number of cut-scenes that seem to go on for an unnecessary amount of time. 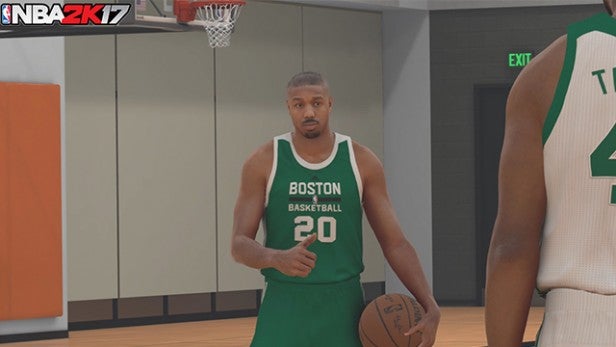 Despite this rather frustrating experience, however, the overall career mode is as solid as ever, and even the typically contrived dialogue seems to have been improved this time around. MyCareer is still a slog, but it’s incredibly in-depth – as are the other modes which I haven’t invested as much time in, but which from my initial impressions seem more comprehensive than ever before.

Woe betide anyone who ventures online with a less-than-perfect connection, however. My online career was more than a little frustrating, with slowdown and glitches making it impossible to play a fair game with anyone.

If nothing else, then, the game manages to impress with the sheer level of detail it provides. You could spend months trying to work through the career mode, not even touching MyGM or MyTeam, and feel as though you got your money’s worth.

That, combined with the graphical upgrades and new animations, plus the fact that 2K has managed to retain the overall feel of the game, makes the 2K17 experience a very impressive one. It’s not without its flaws, but the lasting impression you’ll get is one of sheer admiration for the amount of work that must go into creating such a varied game.

NBA 2K is still carrying the baton for basketball sims all on its lonesome, and seems to do so effortlessly. If the great NBA 2K vs NBA Live war is ever to return, EA has got a hell of a lot of work to do.